This is Part 2 of a three part series on our trip to Vancouver in May 2015.

You can read and view Part 1 here and Part 3 here.

Day two of our May Long Weekend trip to Vancouver marked the real reason for our entire trip. Had the evening’s events not taken place, I’m not sure if we would have chosen Vancouver as our annual vacation destination. But prior to the evening, the four of us headed out to Coal Harbour and Stanley Park to catch some beautiful views of the fluffy clouds, blue water, and massive green trees.

Before starting our lengthy day, we walked past Canada Place and some gigantic cruise ships en route to DeDutch for breakfast. It was a great breakfast with a scenic view overlooking the harbour and the float planes flying in. If I was wealthy and lived in Vancouver, I would consider eating every breakfast there. 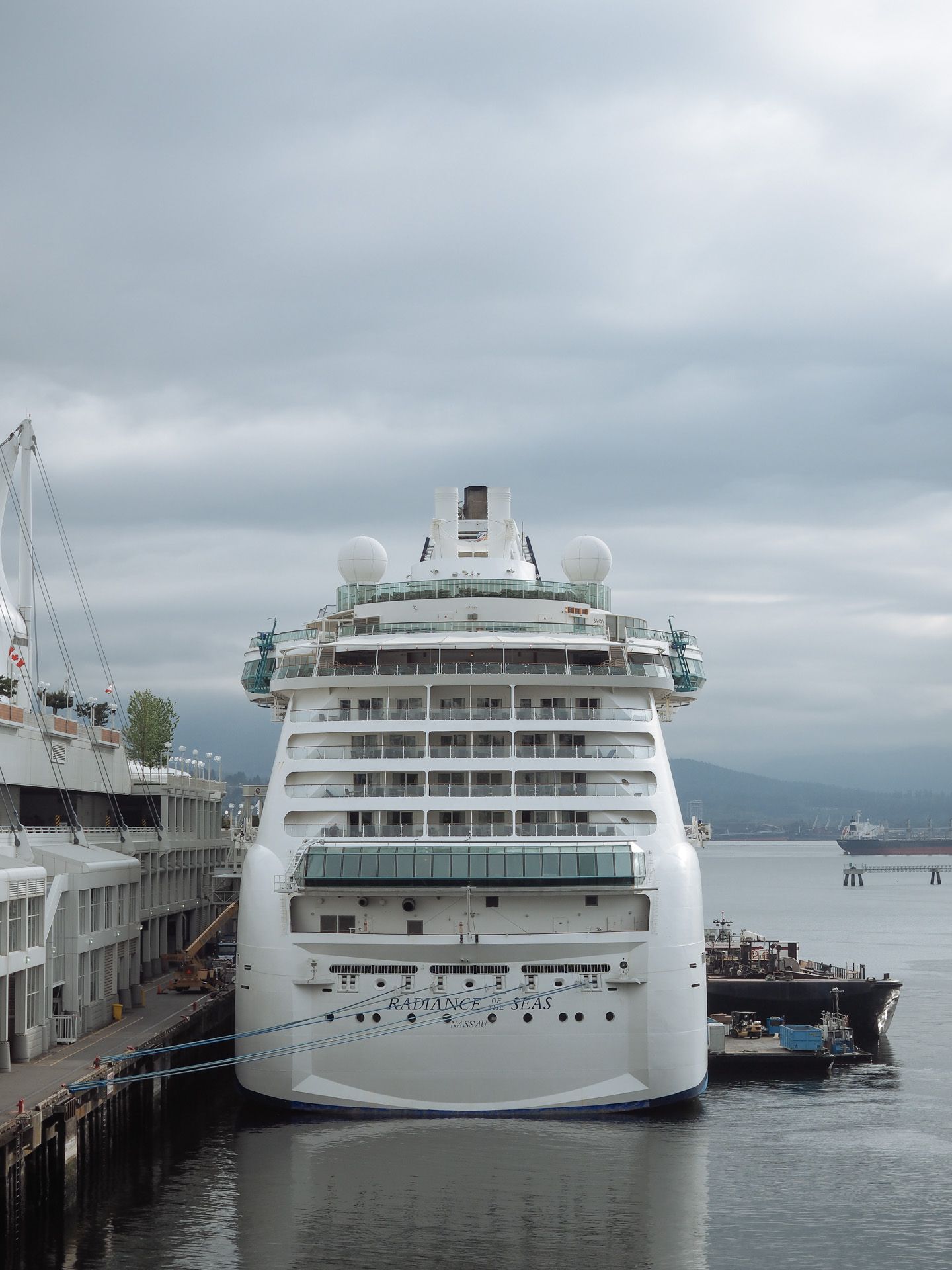 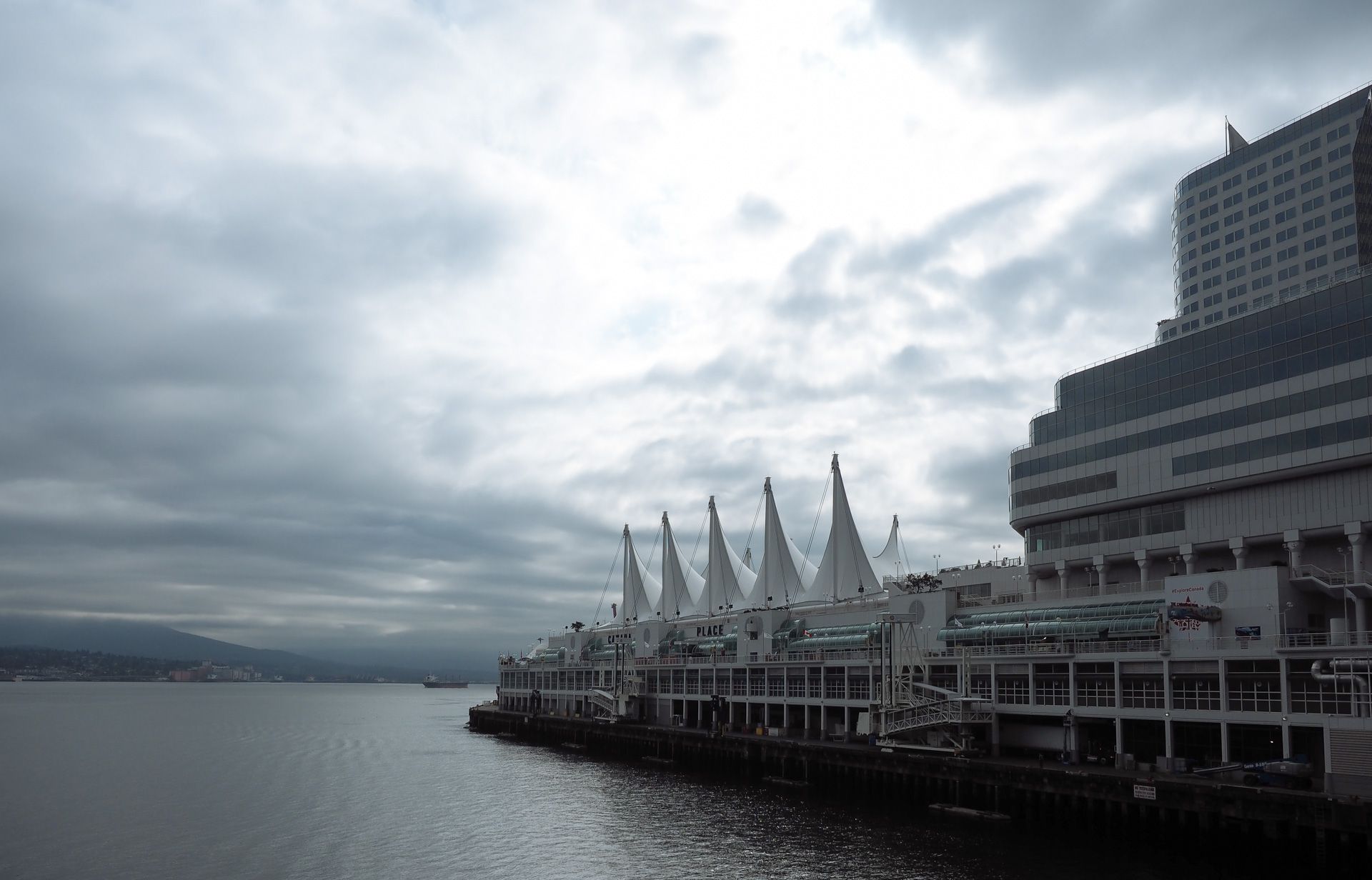 The clouds passed as we ate breakfast, yielding some gorgeous scenery along the waterfront. Although Jac and I visited Coal Harbour the day before, my brother and his girlfriend were taking in the views for the first time. I don’t think they were disappointed. 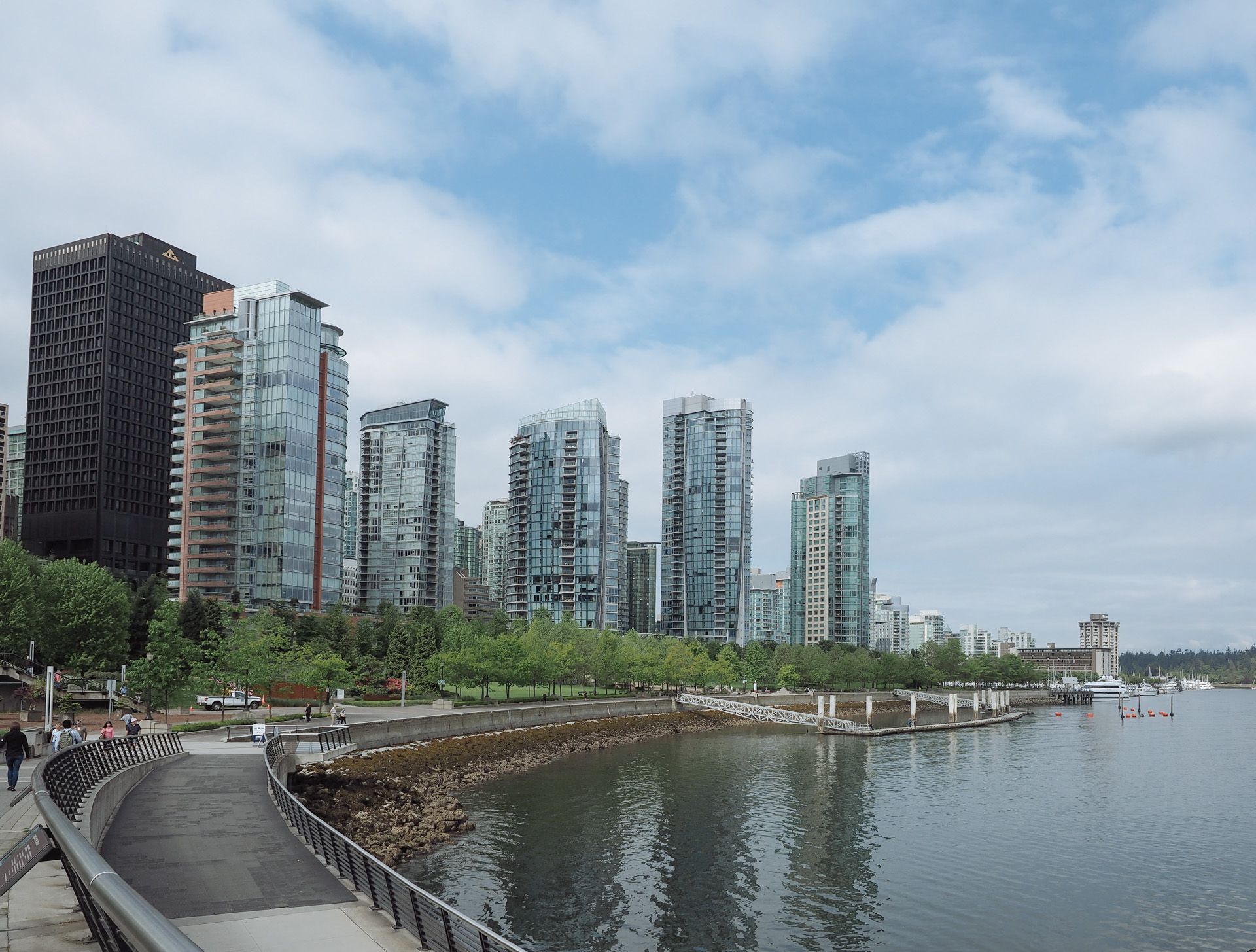 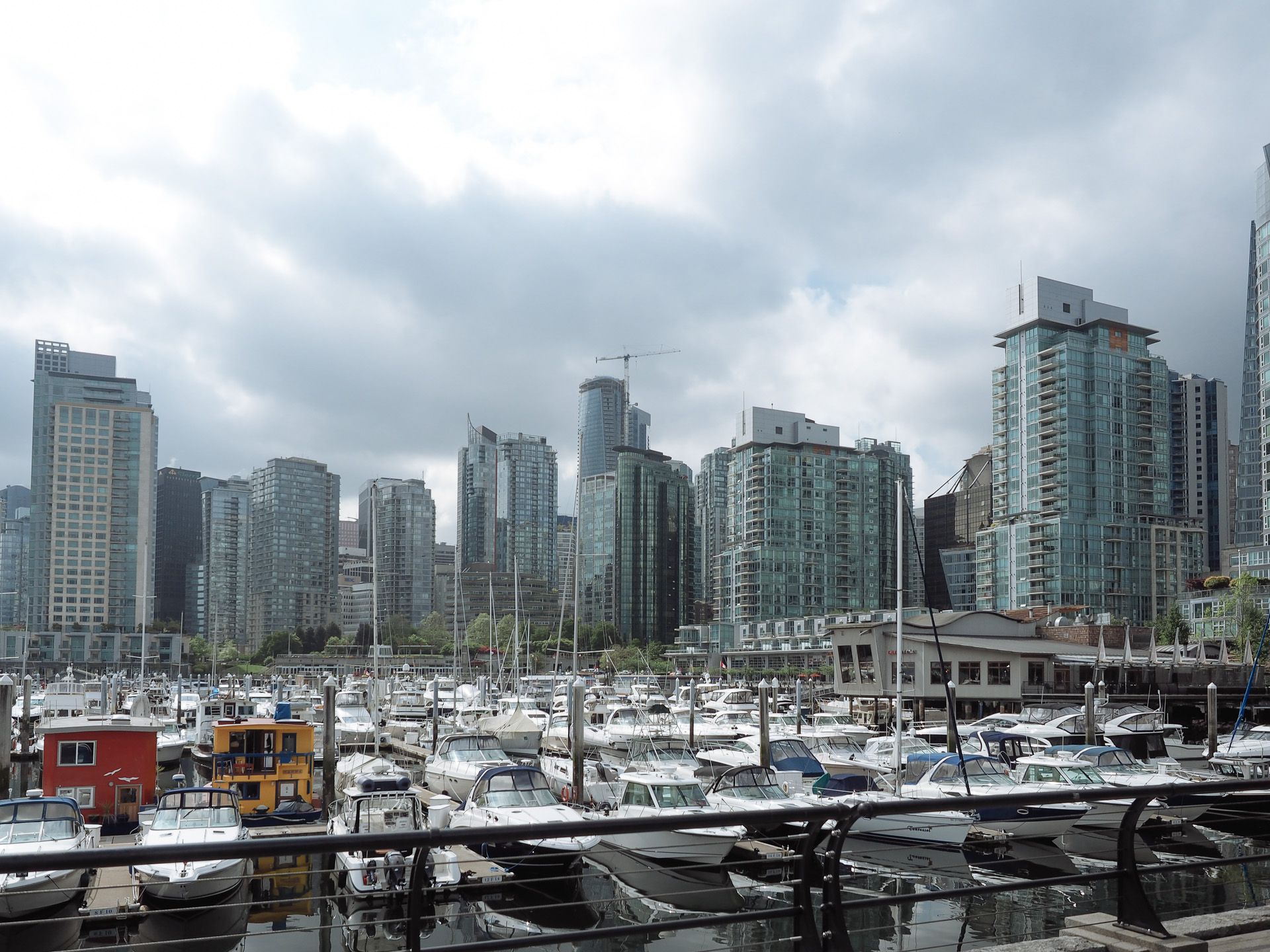 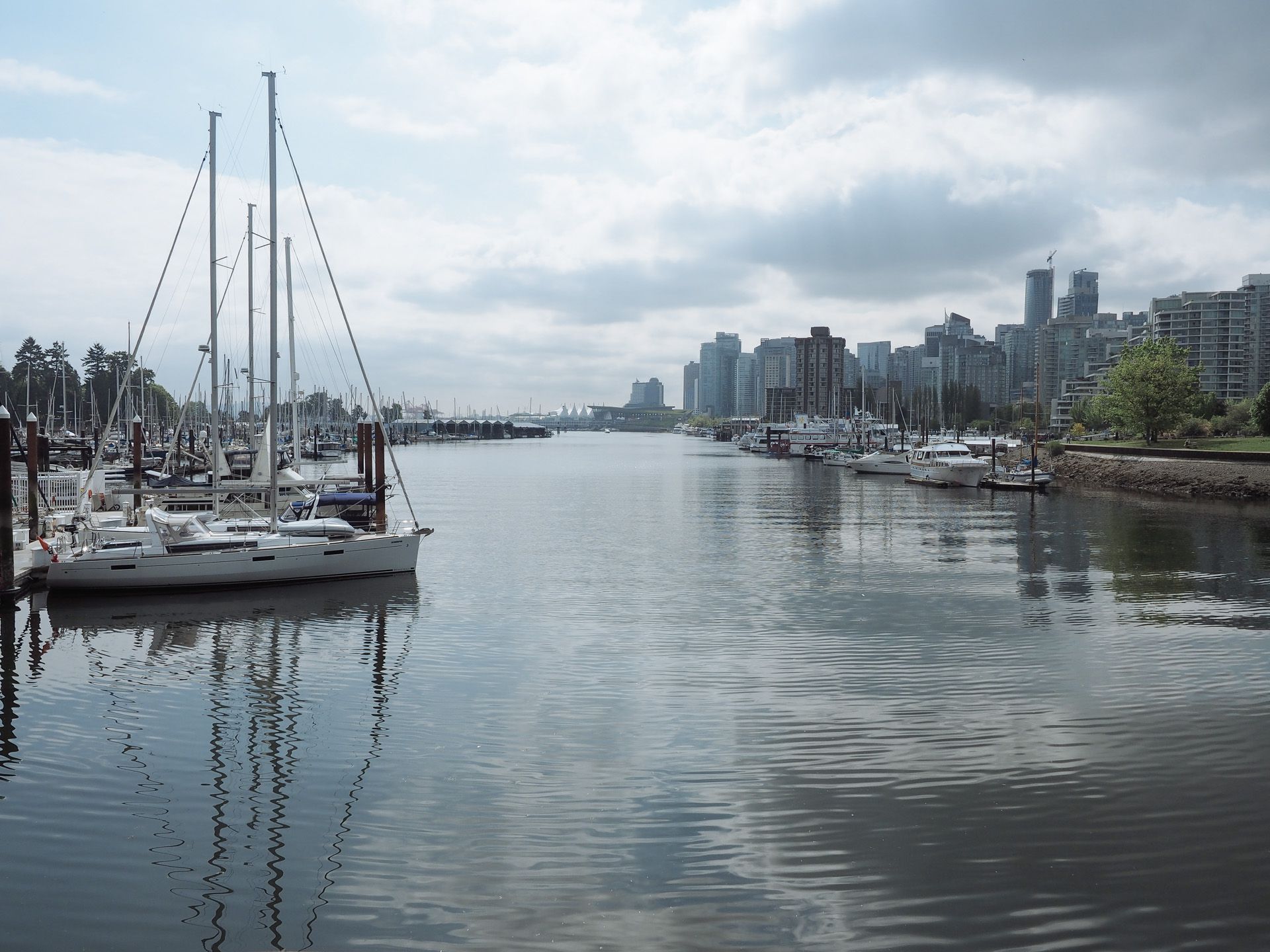 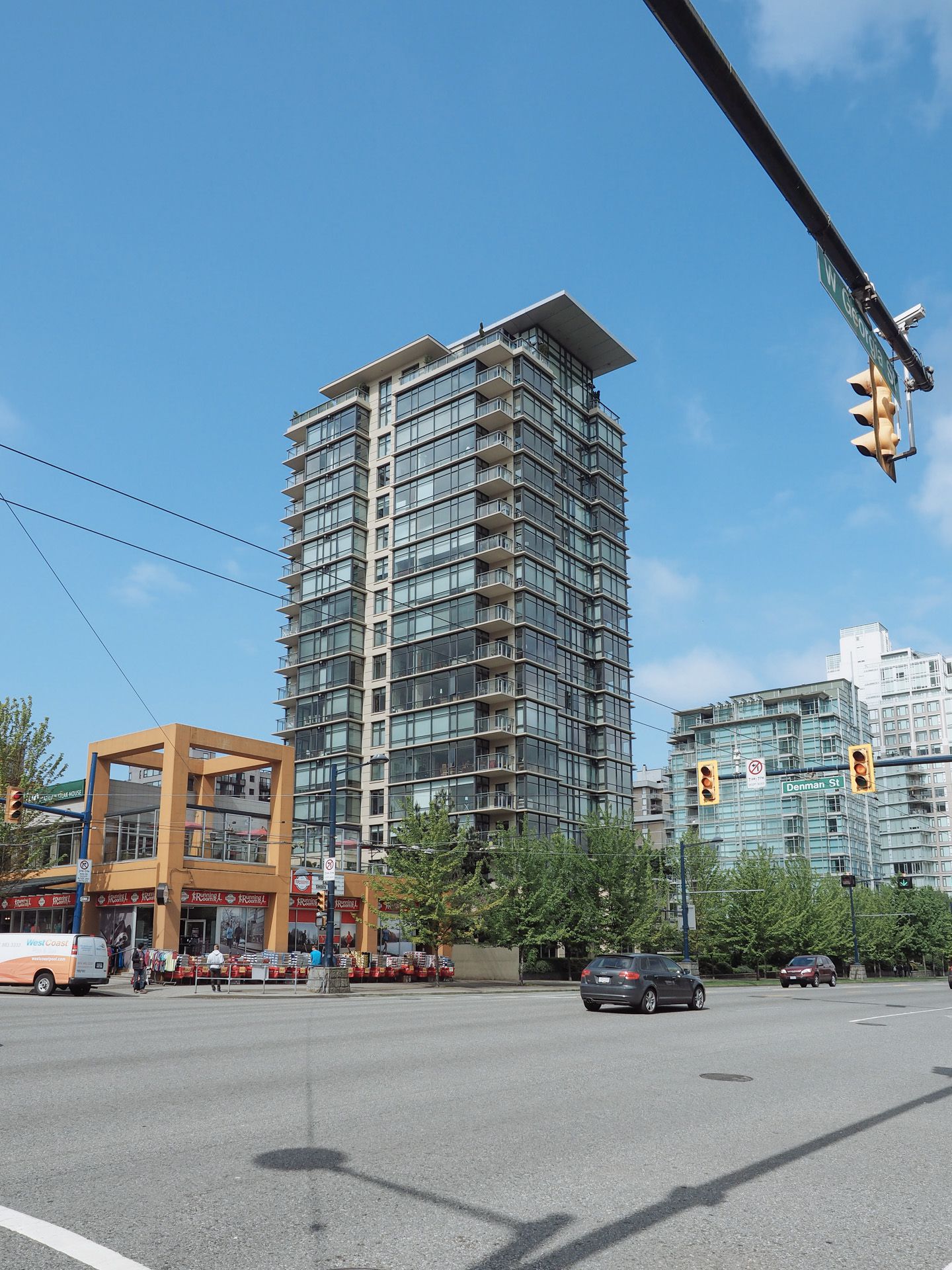 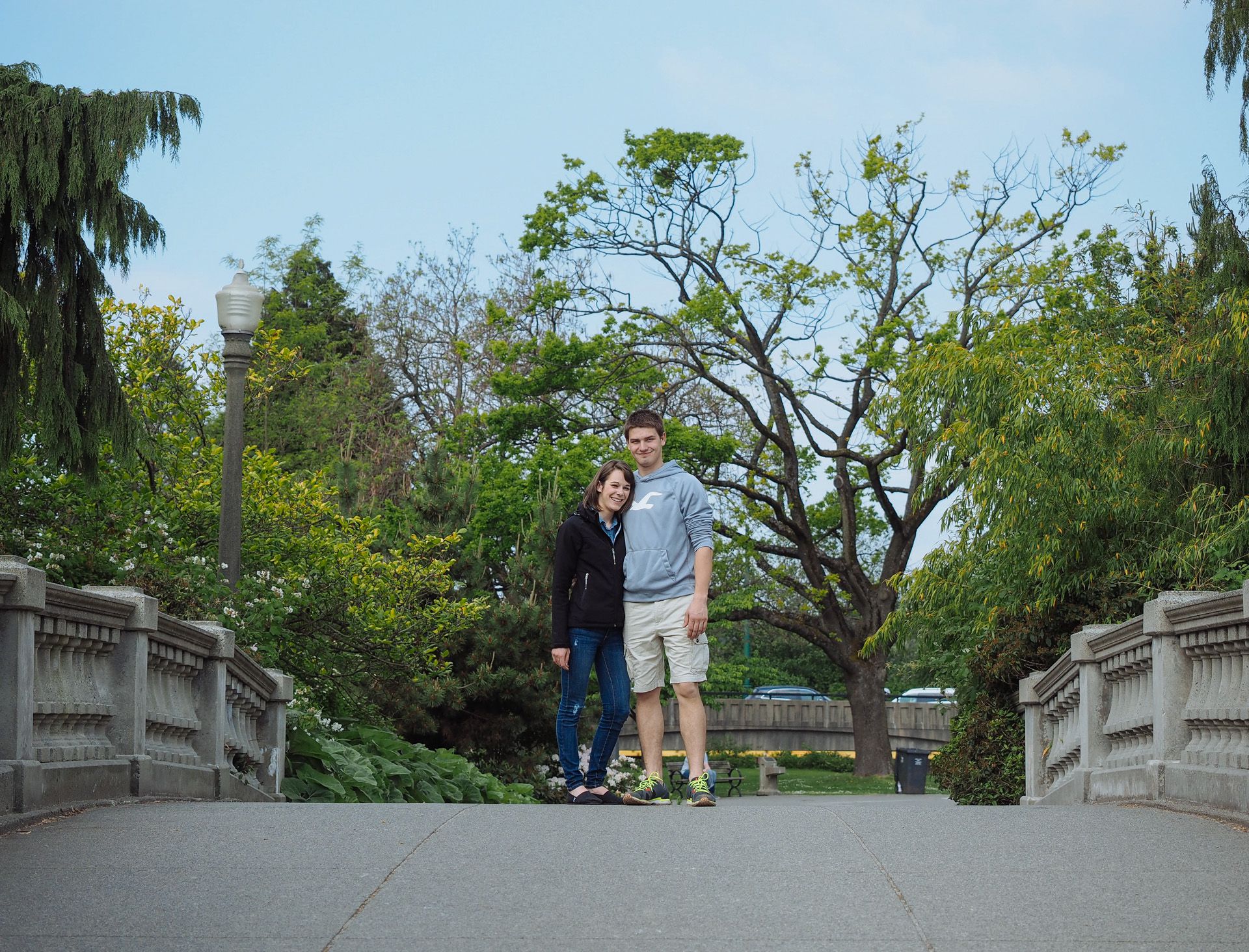 Walking through Coal Harbour was one of the most peaceful walks on our entire trip. It was early on a Friday morning and many people ran the boardwalk for their morning workout. As the clouds subsided, I couldn’t help but think I would choose to live in this location if I could move anywhere in the world.

After our walk along the boardwalk, we stopped at Spokes Bicycle Rentals located at the entrance of Stanley Park. For a mere $25/six hours/bicycle, we were able to ride the Stanley Park Seawall cycling path and then some. We may have completed the ride a bit quicker if it weren’t for some guy taking photos every 100 meters.

This cycle path was easily one of the coolest parts of our trip. Jac and I rented individual bikes and the other two rented a nifty tandem bike for the hour ride. The weather was neither too hot nor too cold and allowed for a really enjoyable (and healthy) way to work off our breakfasts. 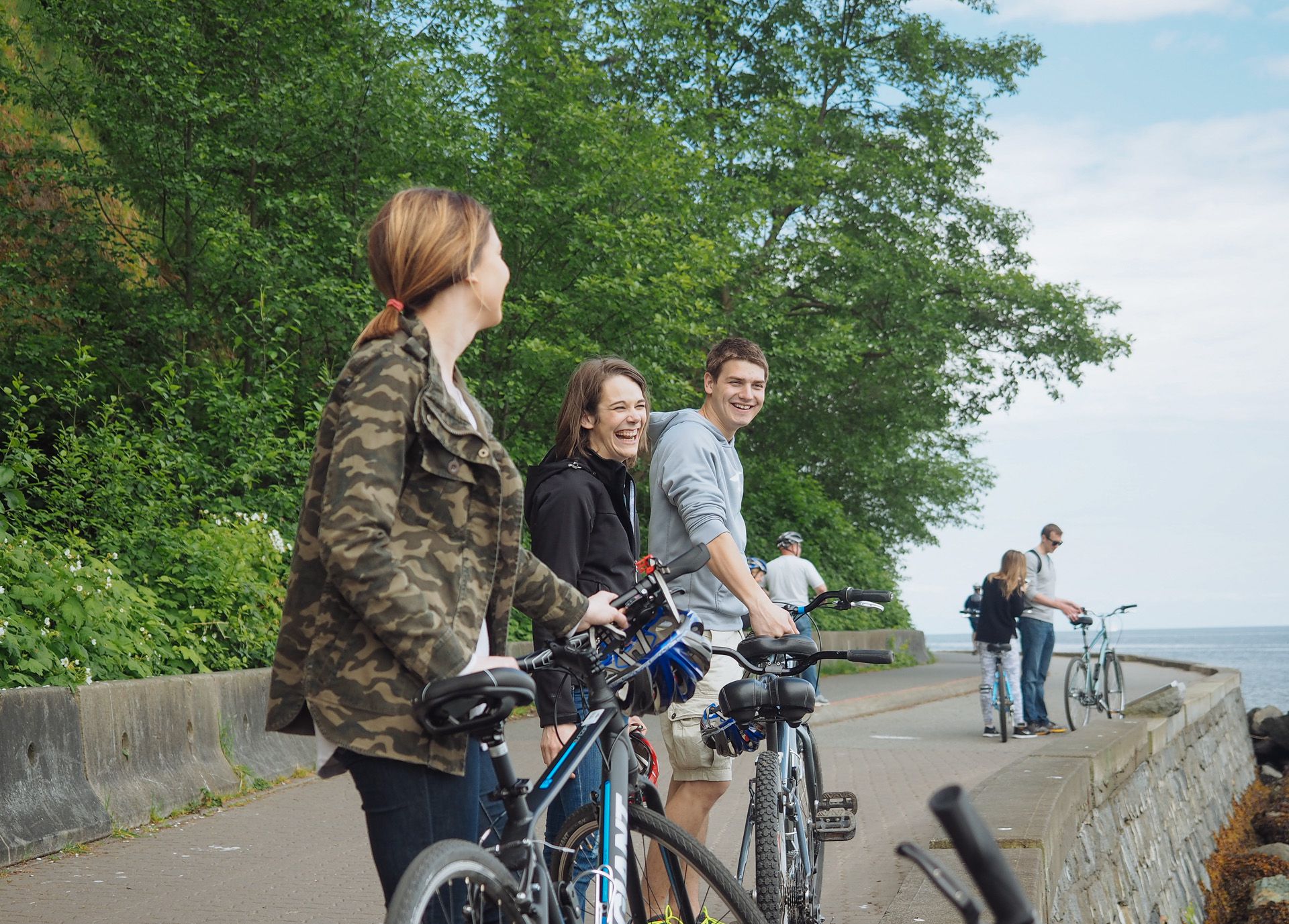 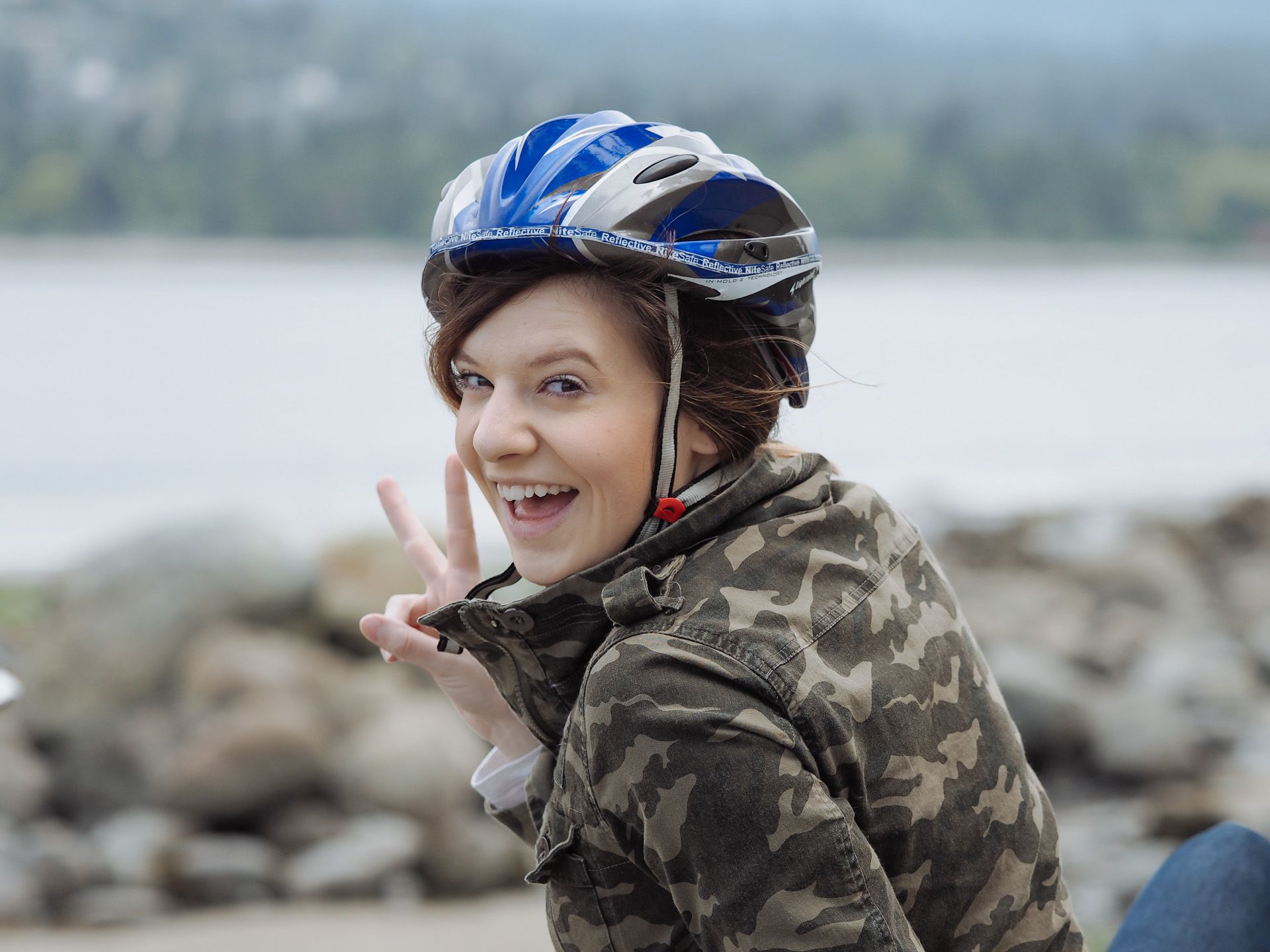 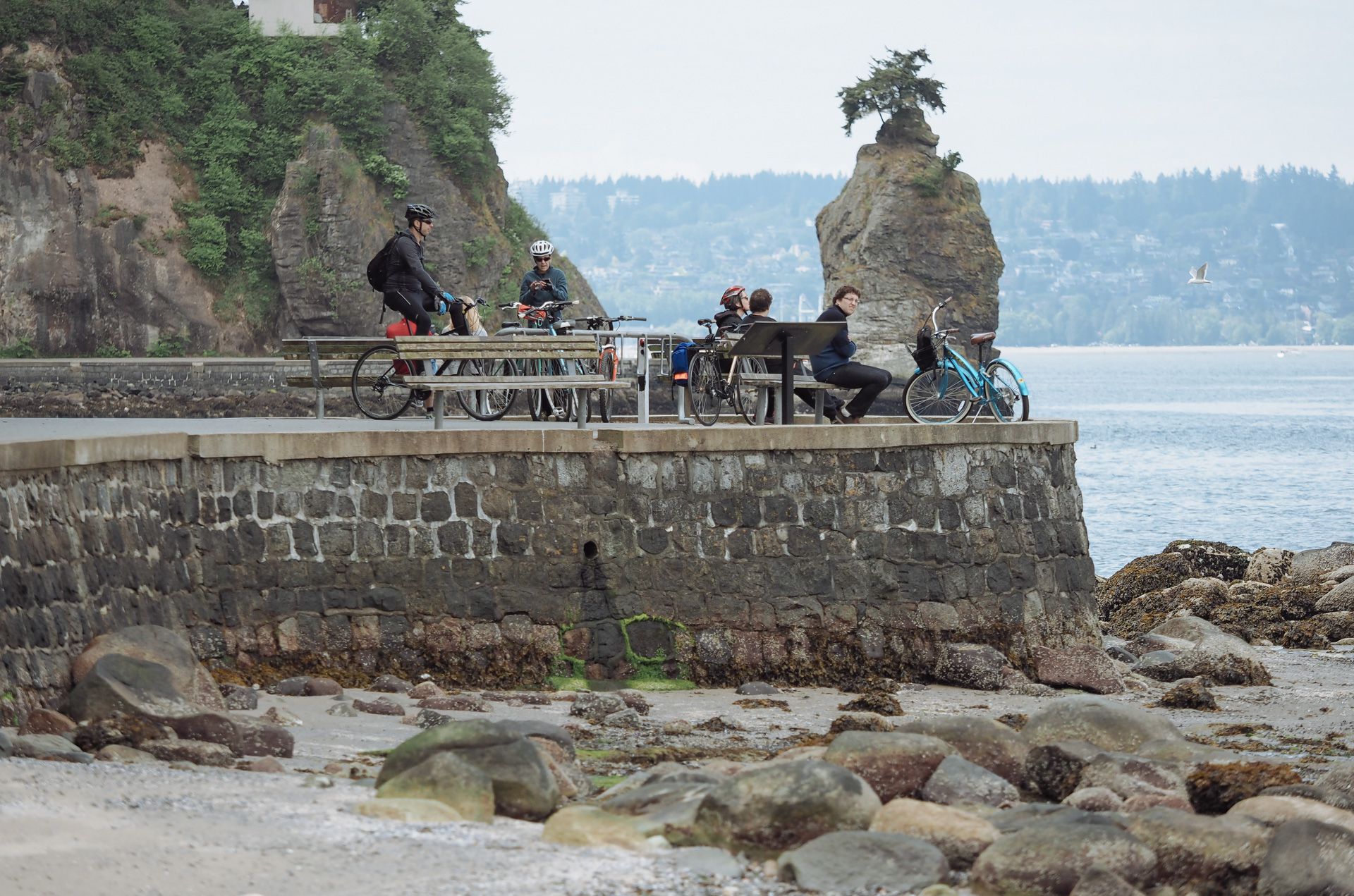 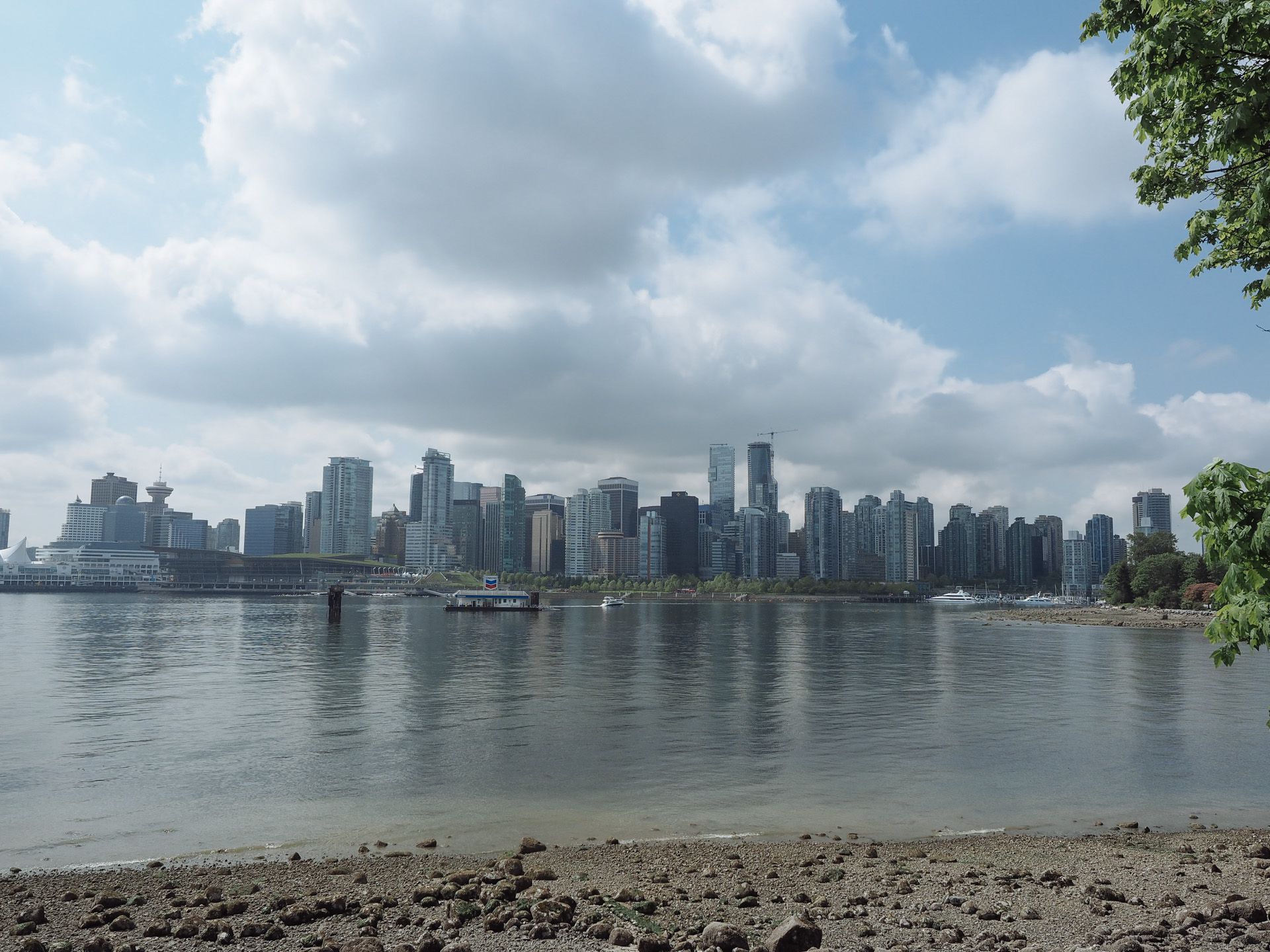 The Southwest portion of Stanley Park’s cycle ride provided a great view of the city skyline. 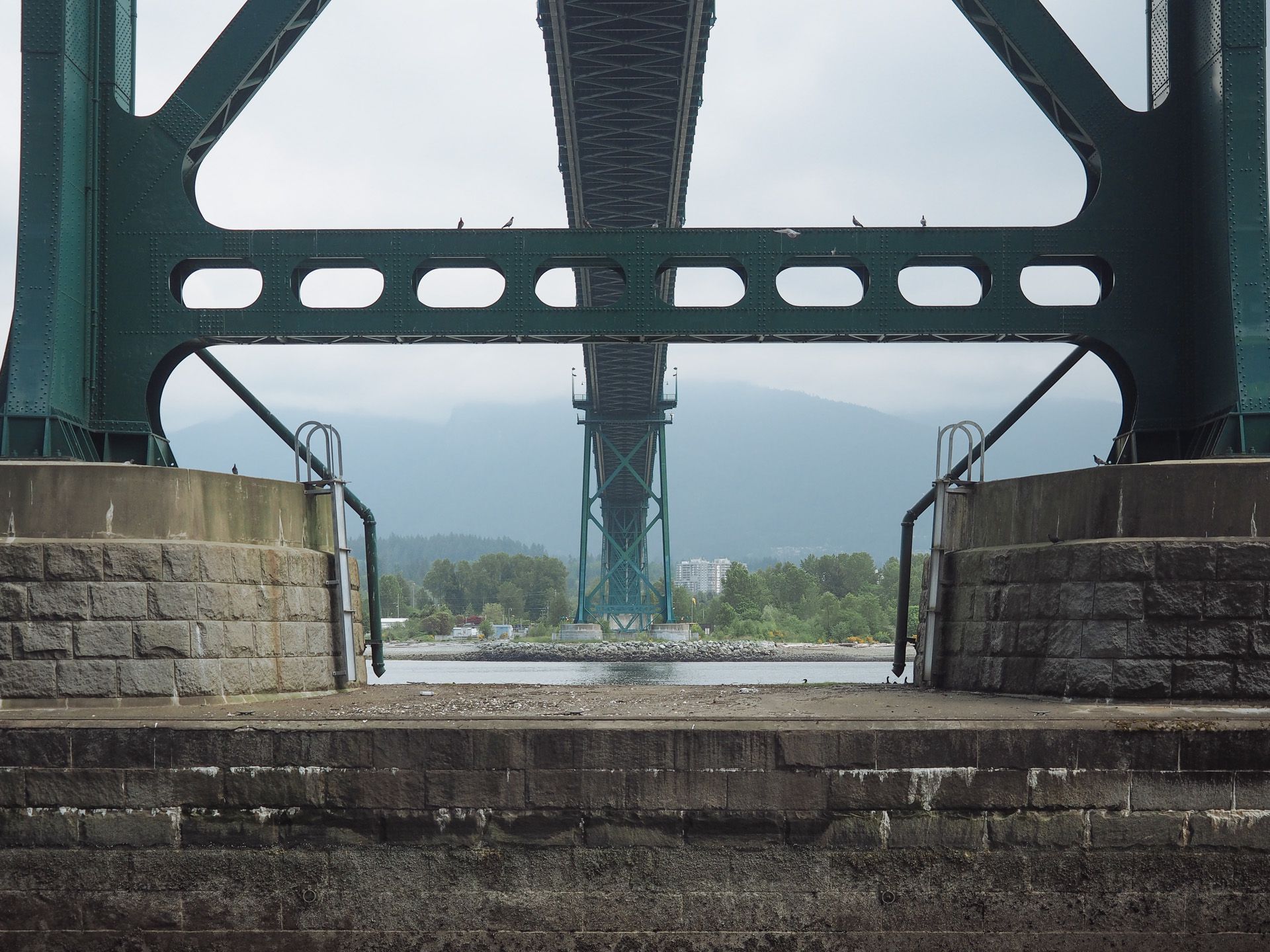 The Lions Gate Bridge appears to be one of the more prestigious bridges in the Vancouver area. We crossed the Burrard Bridge and the Granville Street Bridge as well, but the Lions Gate seems to garner the most attention.

In comparison to other great bridges, such as the Brooklyn or the Manhattan Bridge, the Lions Gate left a little to be desired. Judging Vancouver with our four days of experience, I wouldn’t be surprised if something bigger and better was built in the future. 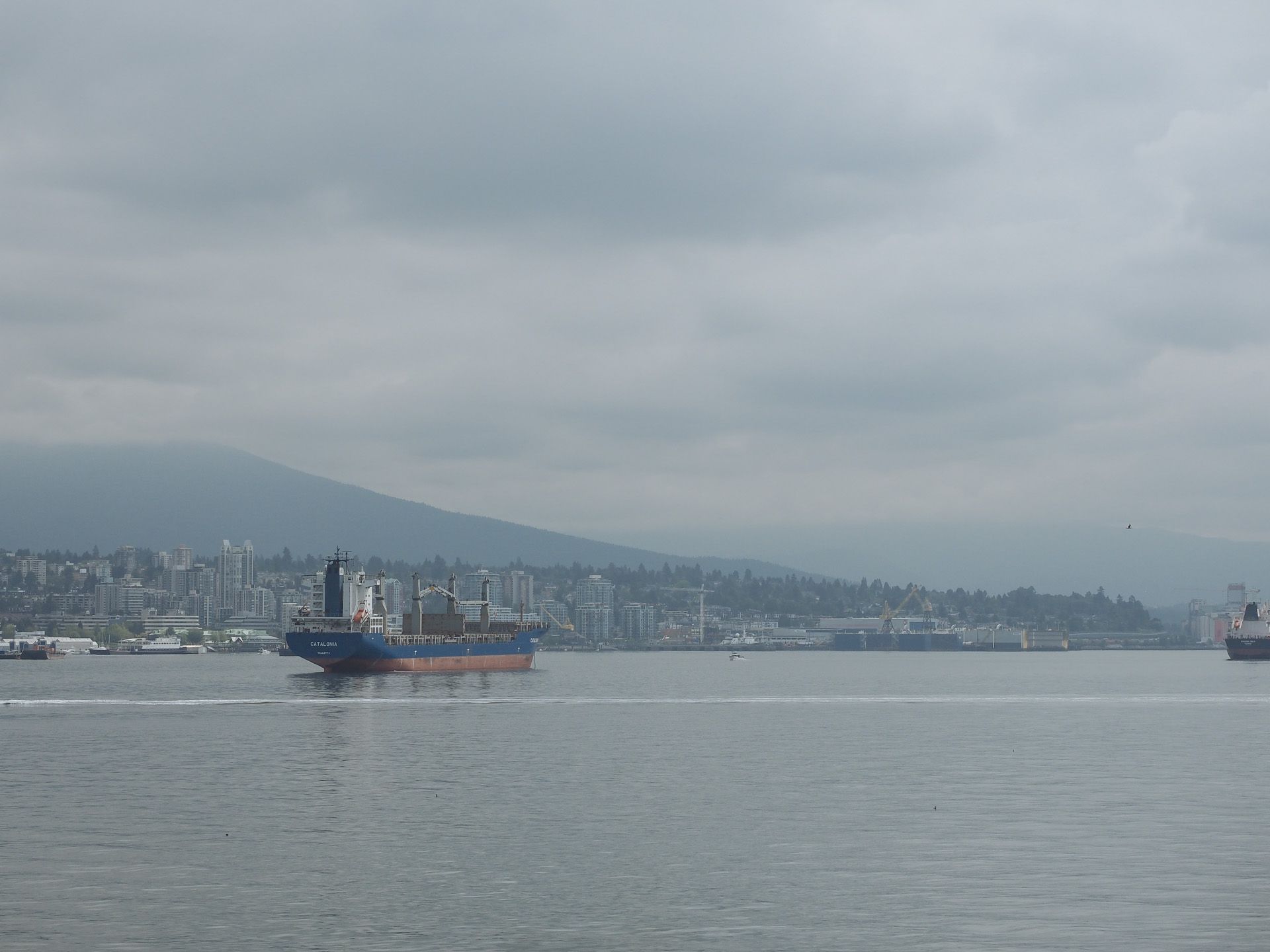 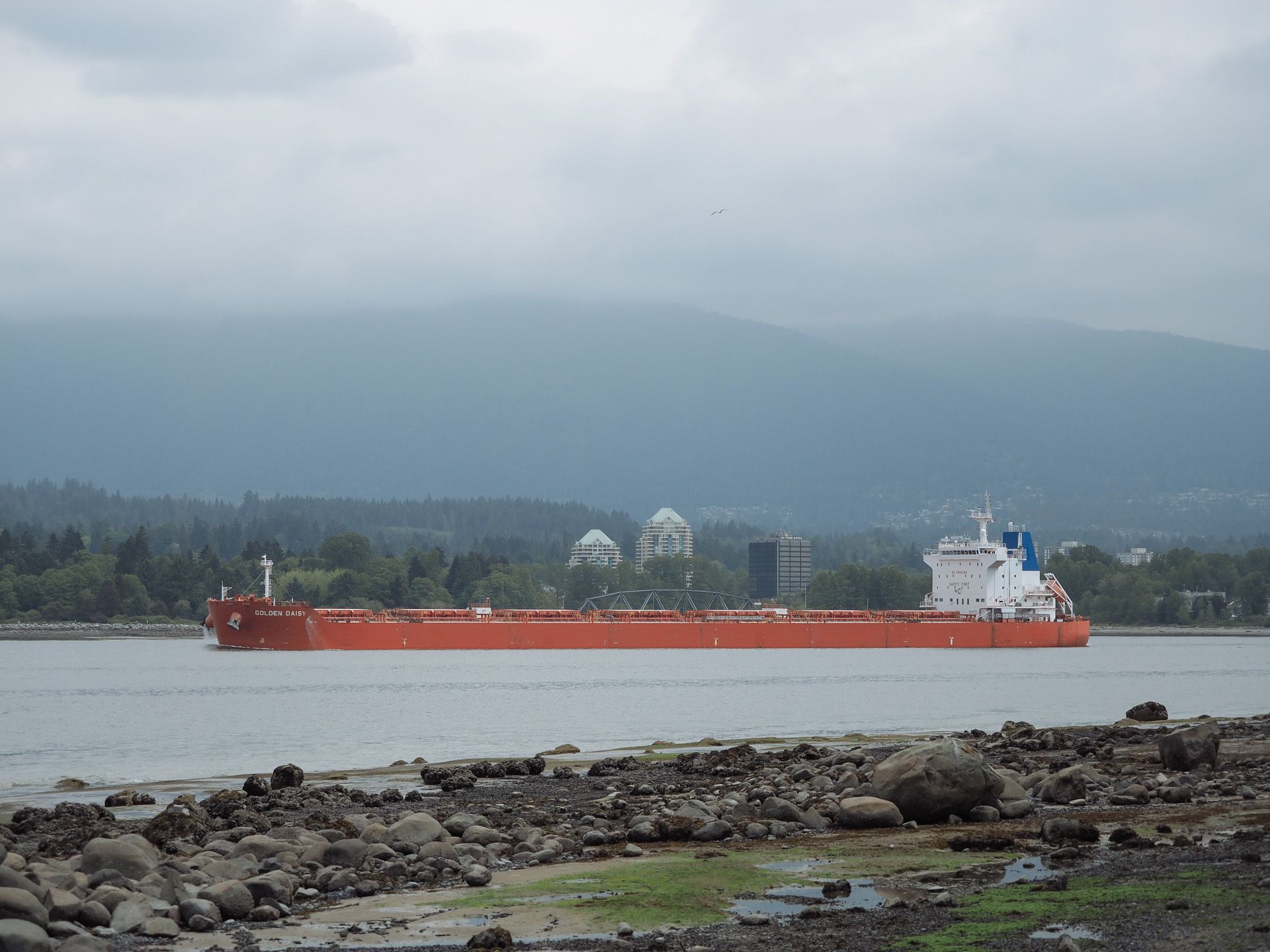 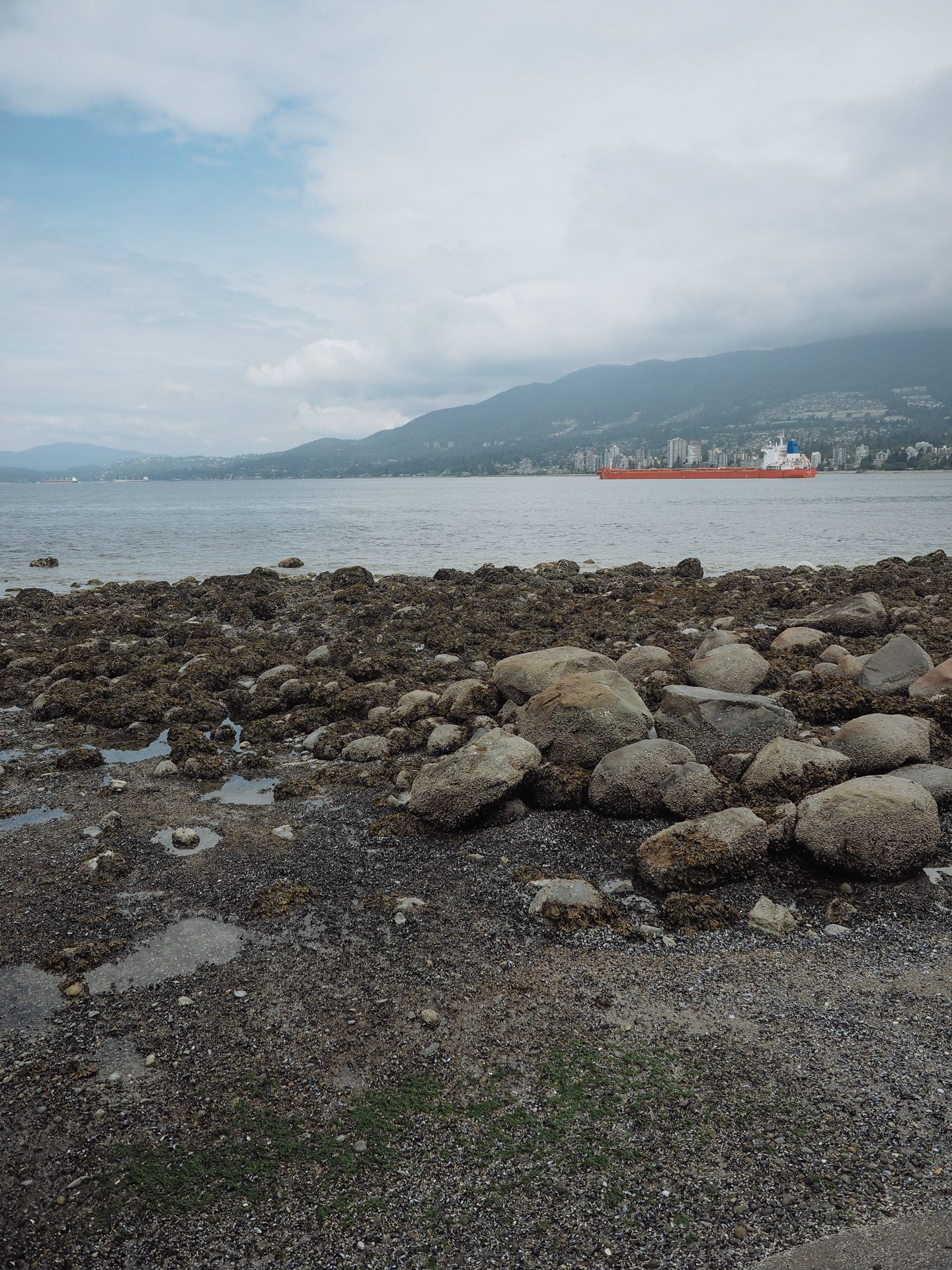 I’ve spent my whole life on the Canadian Prairies, so mariner life as a whole is completely foreign to me. While I could name a fair chunk of crop types on first sight, 1 I’d be hardpressed to understand any terminology spoken on the sea.

These ships seemed absolutely gigantic to me. I don’t believe I had ever seen a cargo ship of this size in my life. To think we send these ships out into the open ocean with thousands of containers containing millions of dollars of goods — I had to stop peddling for a few minutes just to comprehend the magnitude of it. These are floating cities on the water, and I had to stop to capture as much as I could. 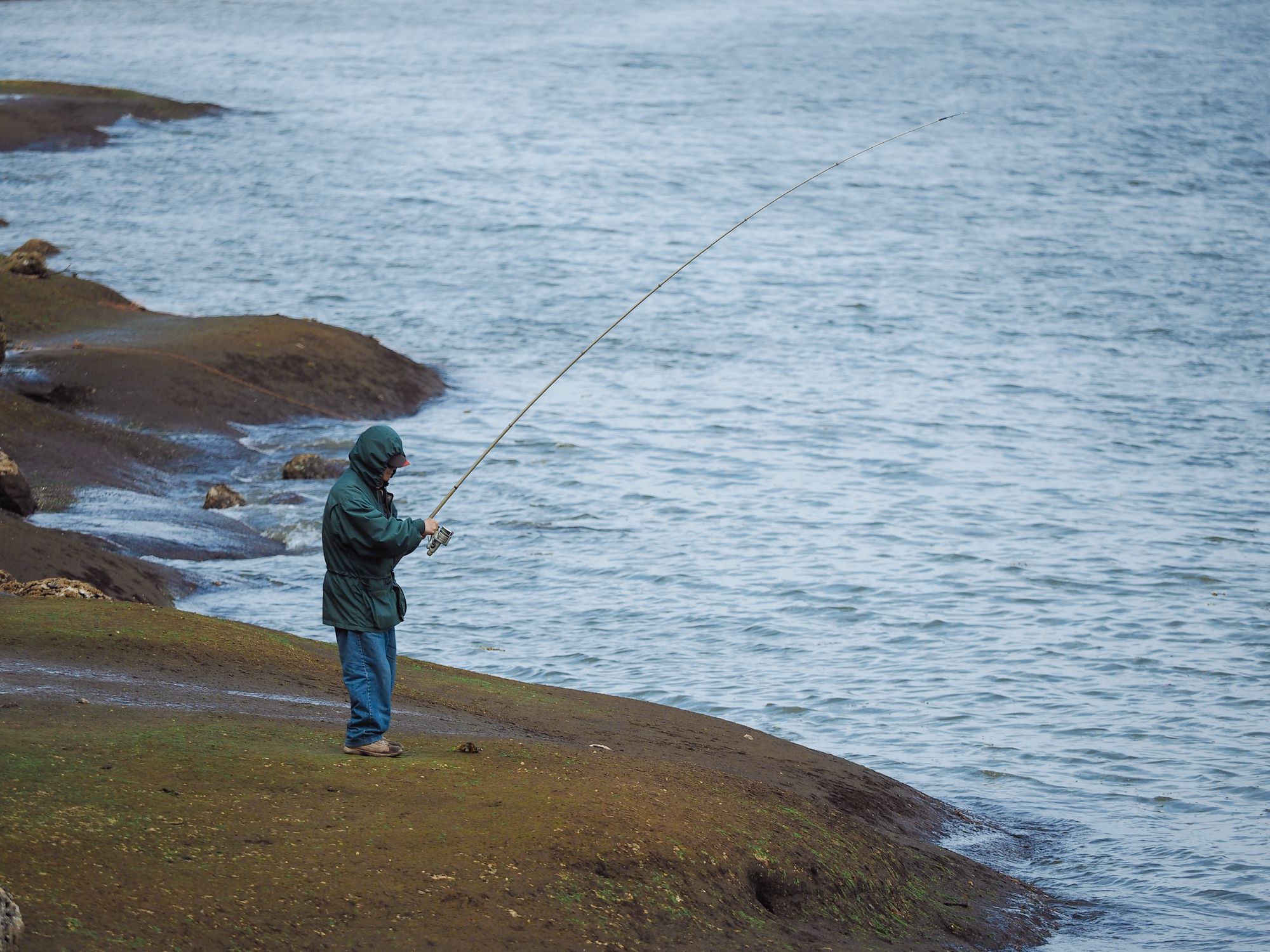 Along the way, I was lucky enough to catch a single fisherman beyond the sea wall hoping to catch a morning breakfast.

Sometimes photos speak to their creator more than they do to an audience, and this could be one of those times. This may be my single favourite photograph I have ever shot. I felt the composition correctly placed focus on his fishing rod and jacket and the way the waves rolled in just below his feet allowed me to capture that moment perfectly. To each their own.

I have yet to decide how to edit the photo, so for the sake of consistency, I’ve applied the same edits as I have for all the other images here. However, I think this image would look great in a black and white format as well. If you have some ideas on how to maximize this shot, please get in touch. 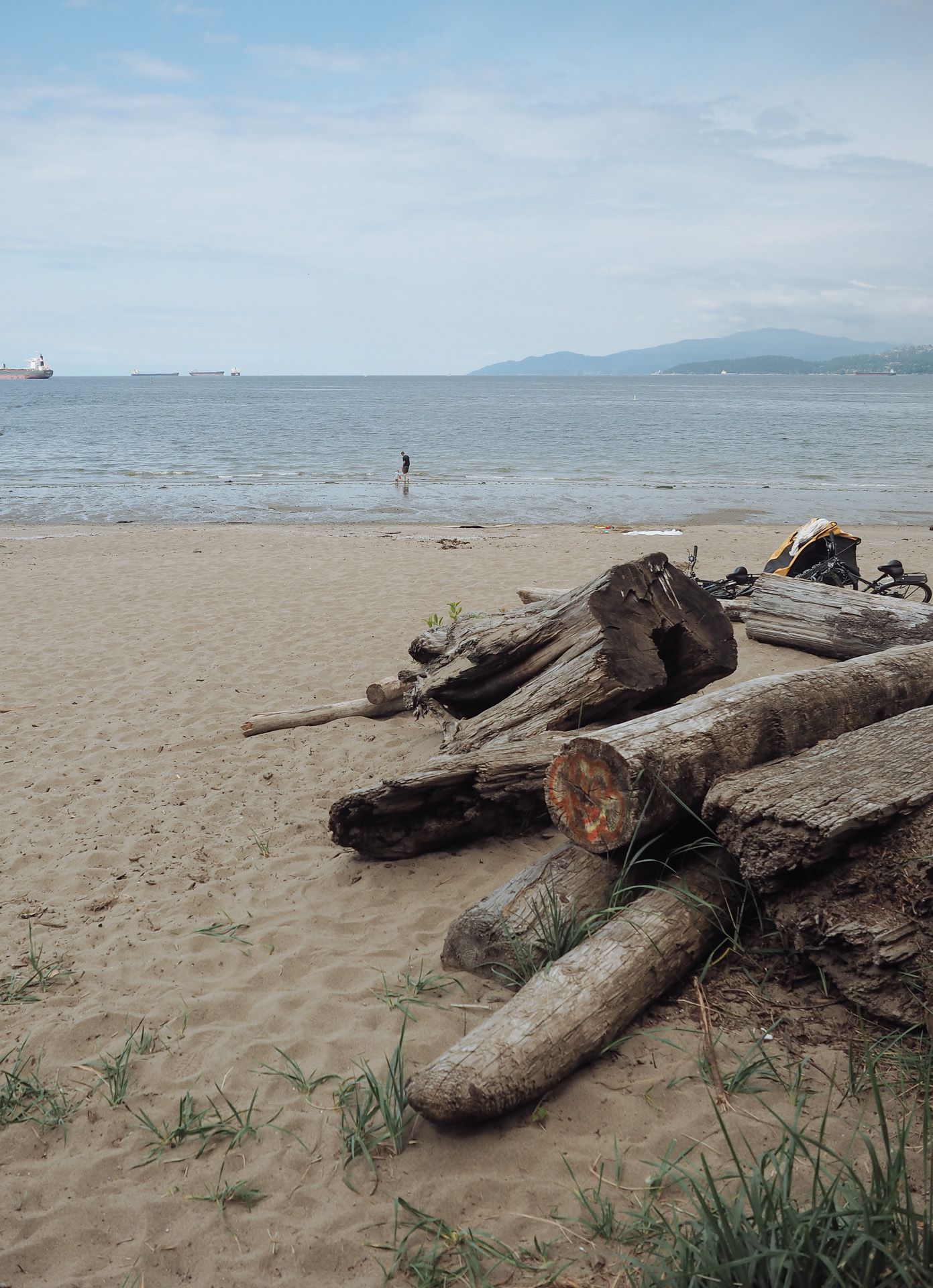 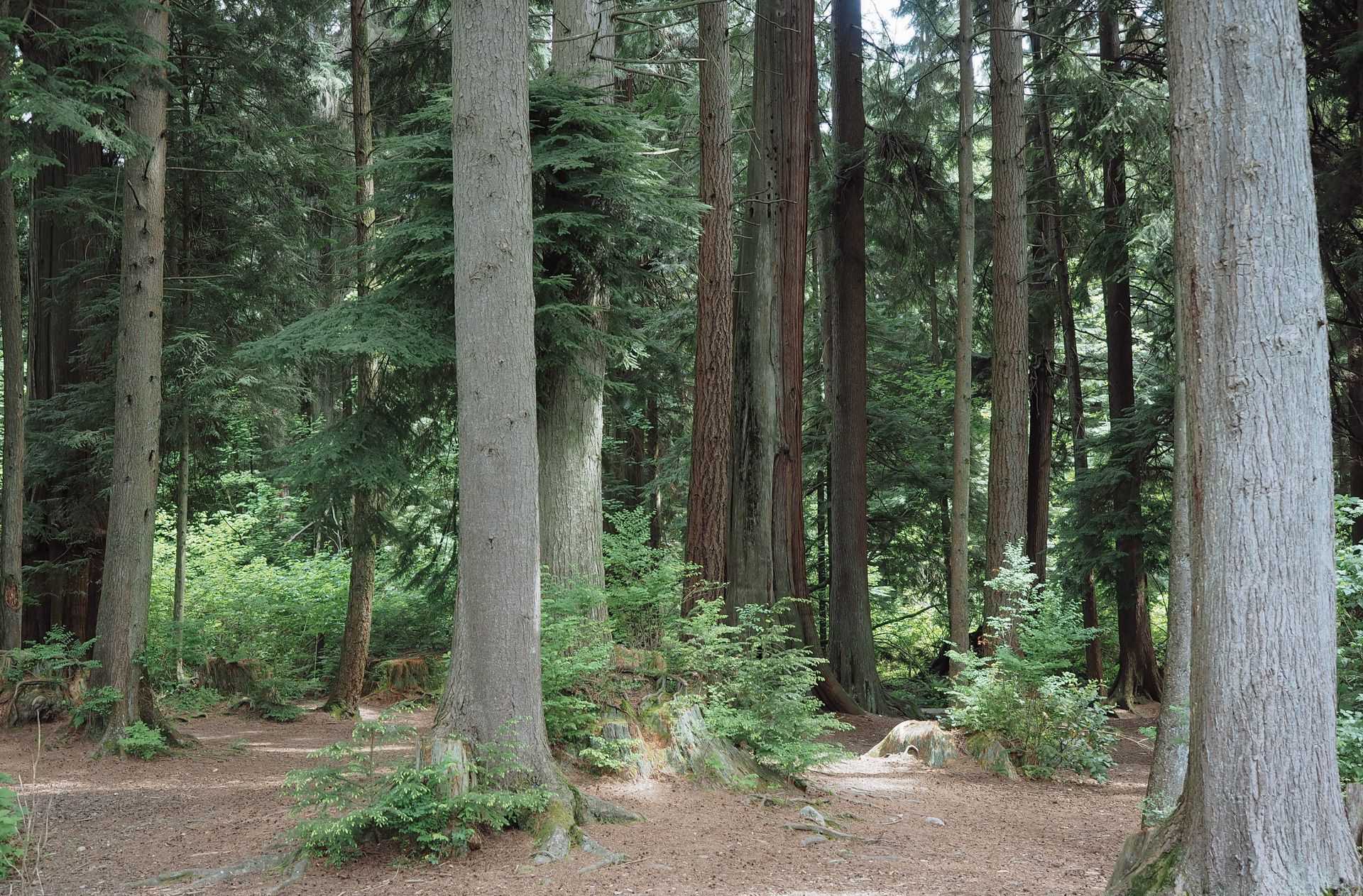 The rest of the bicycle ride consisted of more scenic views and some Stanley Park forestry. We became a bit tangled up in our directions as we ventured into the cycling paths within Stanley Park, but we were able to find our way and head to the Vancouver Aquarium for some education on the area’s marine life. 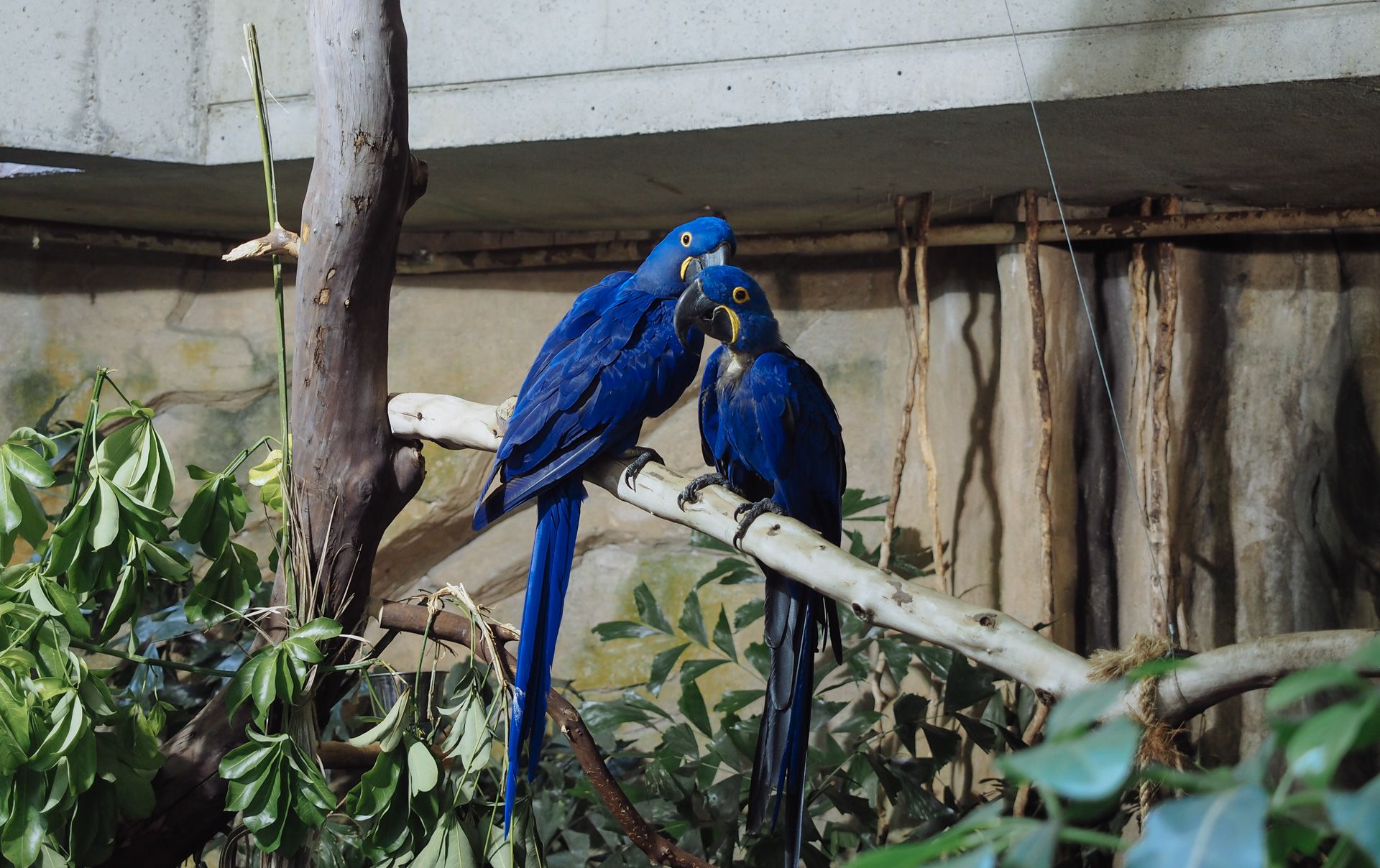 (In all honesty, I don’t think Vancouver is home to this type of bird. I shot this photo in the Amazonian section of the Aquarium.) 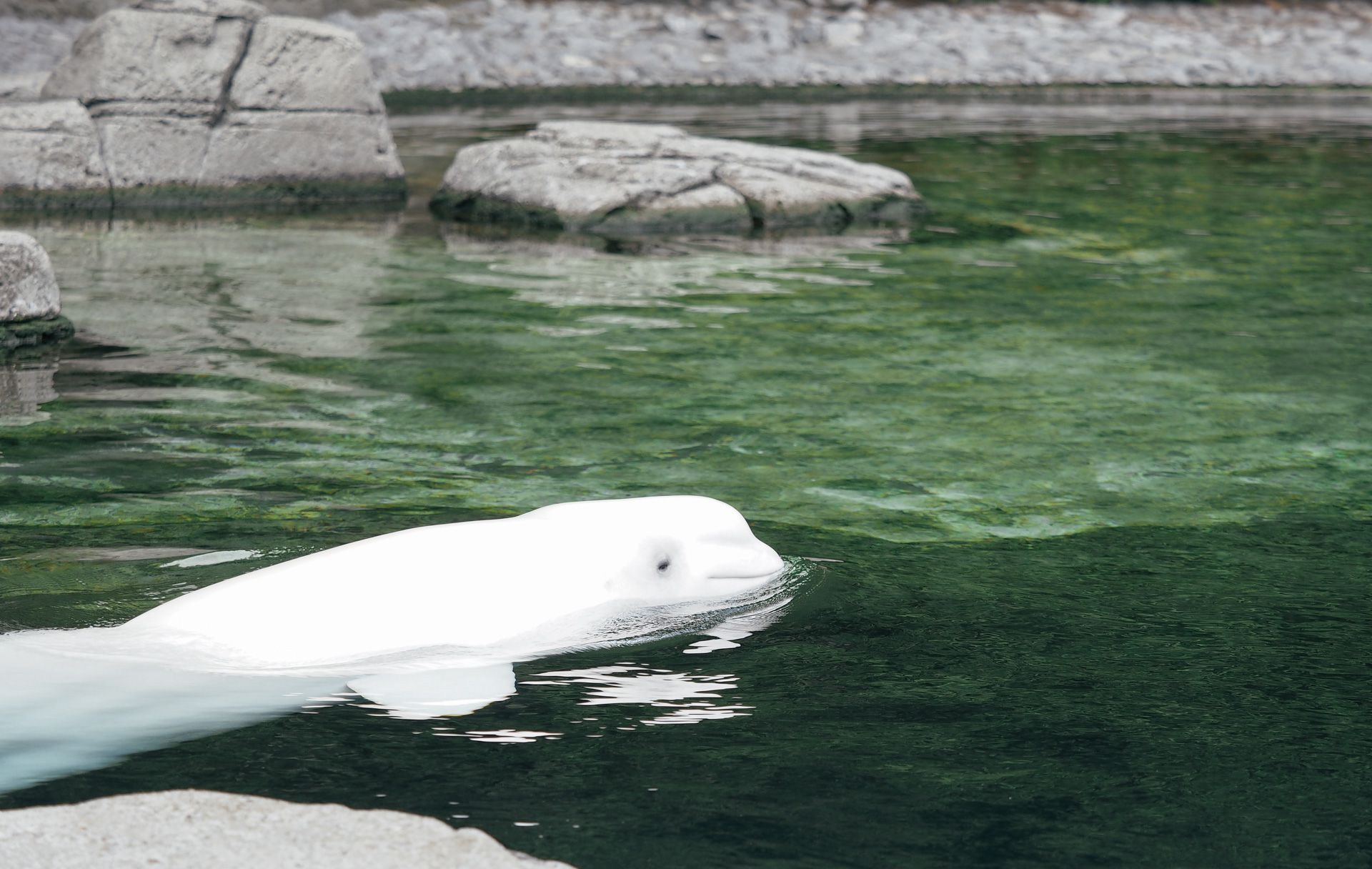 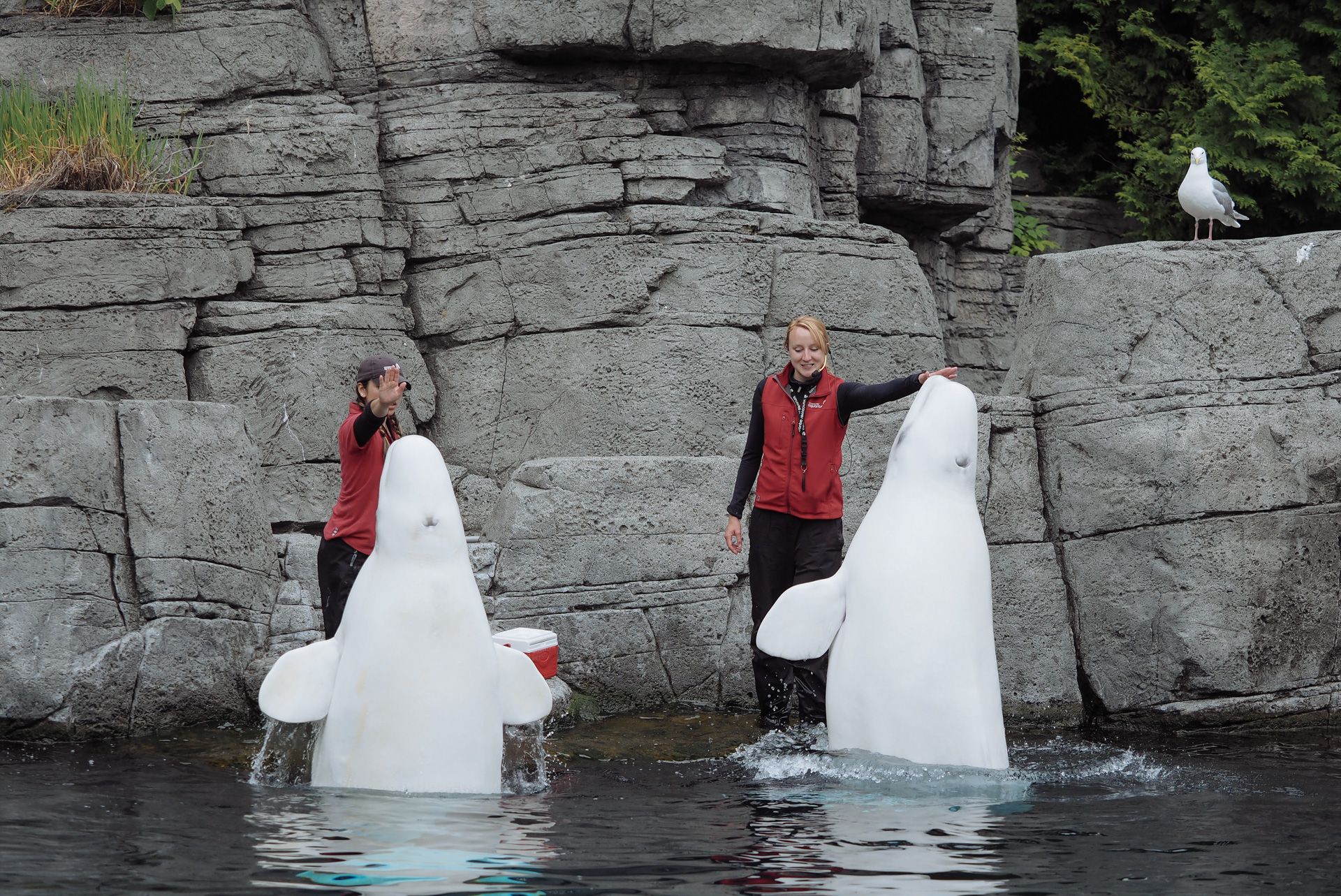 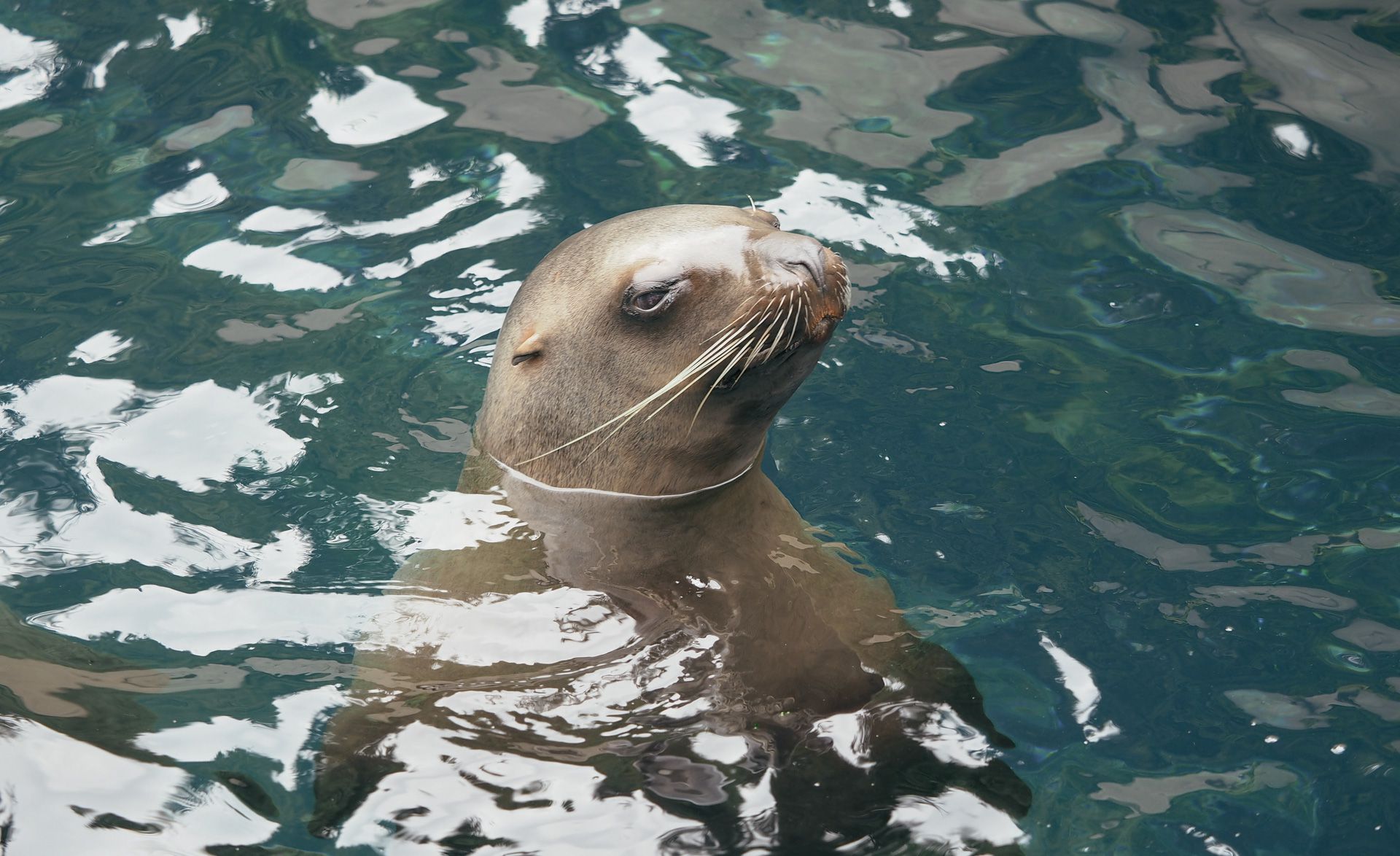 There was a cool beluga show which showcased the incredible intelligence of beluga whales. The best part of the show was the large seagull trying to snag the small fish being fed to the belugas. The trainers kept the snacks in their containers and, on numerous occasions, the seagull came within inches of snatching a lunch.

After our morning on the bicycles in Stanley Park and our afternoon at the Aquarium, we headed back to the hotel for an early supper and a quick shower. We ordered pizza, watched some of a movie, and began our trek down to Rogers Arena for the hottest show in town.

Bono, The Edge, Adam Clayton, and Larry Mullen were in town to kick off their 2015 Songs of Innocence & Experience tour. We caught the second show, which was a bit disappointing for one main reason: The Edge fell off the stage during the prior night’s show. We caught all “The Edge fell of the edge” jokes during our show instead. 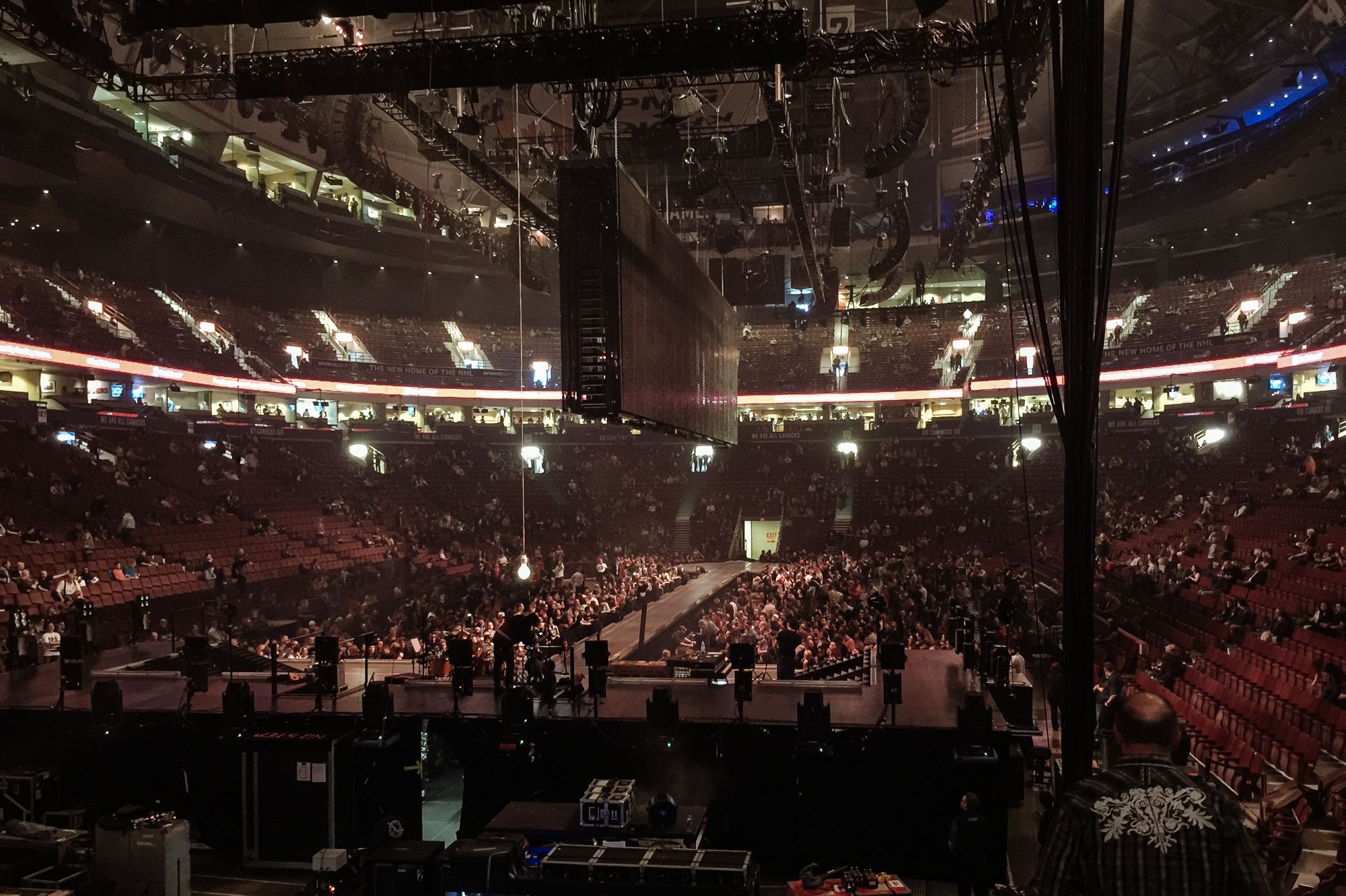 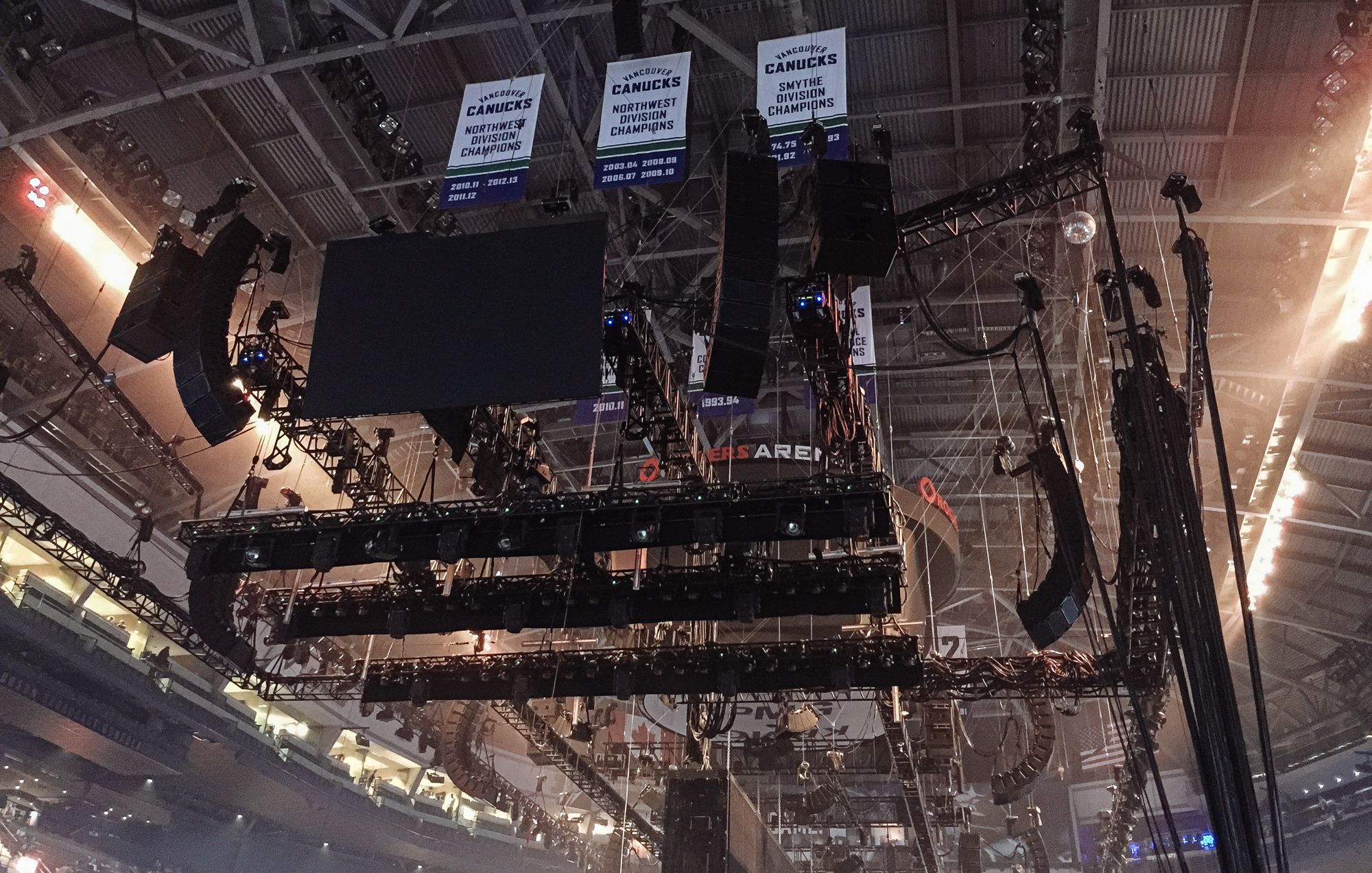 All three of these shots were shot with the iPhone 6 Plus as I was unwilling to carry my gear inside the venue. Clearly, they aren’t to the same quality as a full-fledged camera system, but I was incredibly impressed with the 6 Plus’ low-light performance. Just a few small edits and these photos were passable. 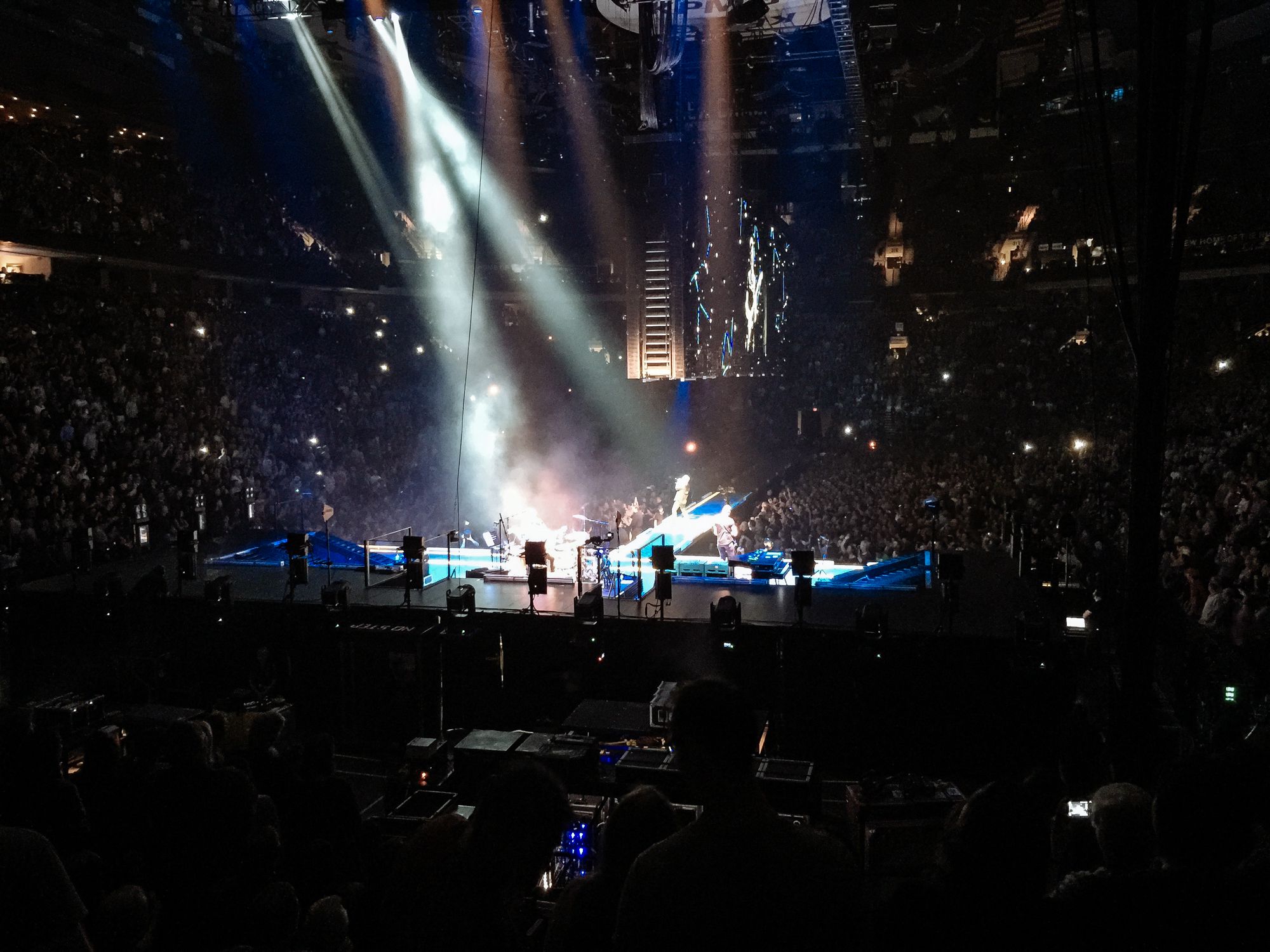 As a whole, the show was everything I hoped it would be. Bono rocked the stage quite well considering his tough accident in Central Park a few months ago. And the band played hit after hit while throwing in a few of their newest Songs of Innocence tunes. To top it off, Bono dedicated the incredible When Love Comes to Town to the late B.B. King. It was a touching sendoff I was truly glad to witness.

Here was the setlist for the second show in Vancouver on May 15, 2015:

That’s one heck of a set list. Quite clearly, the biggest omission was I Still Haven’t Found What I’m Looking For and I have yet to see this song performed live. Lastly, U2’s encore session began with Miracle Drug. I heard a few groans a few rows above me, which led to my own groan as well. I know the political significance behind the song, but the crowd was cheering for the hits from the late ’80s and early ’90s, not something from 2004.

Overall, the show was awesome. So good, in fact, that I’m considering jumping on a plane to catch one of the last performances in New York City at the end of July.

Although we walked around the actual city during day one, we spent the majority of the first half of our trip outside of the city. Day two really opened our eyes to the beauty inside Vancouver. The expansive Stanley Park is a haven for nature to grow without being trampled by human feet and the seawall cycling path was one of the most immersive travel experiences of my life.

And by the end of the second day, the allure of the city could not have made itself more clear. Vancouver seems to be the “Canadian Riviera”. It drew us in and still hasn’t let go. I’ve been researching the cost of living (hint: it’s bloody expensive) and job opportunities non-stop since we returned home.

Day three and day three-and-a-half didn’t make that allure any easier to deal with.