This is Part 3 of a three part series on our trip to Vancouver in May 2015.

You can read and view Part 1 here and Part 2 here.

Last but not least, day three. After two days of hanging around as a group of four, we decided to split into couples for a day and go our separate ways. As such, Jac and I had little to no plans for how the day would come together.

Before our day truly got started, I made a mistake and lead us too far down the line on the train. With Granville Island in mind, we hopped aboard the train at Broadway—City Hall and got off at Waterfront. For some odd reason, I thought Granville Island was at the northeast end of Granville Street.

Instead, Granville Island was at the southwest end of Granville Street. It wasn’t a small mistake.

Instead of hopping on a bus or back onto the train, though, we decided to walk up Granville Street to view some more of the city. It was a fairly long walk, but we learnt that Granville Street isn’t the cleanest of places after a long Friday night and that there are a few shops we wanted to steer clear from. 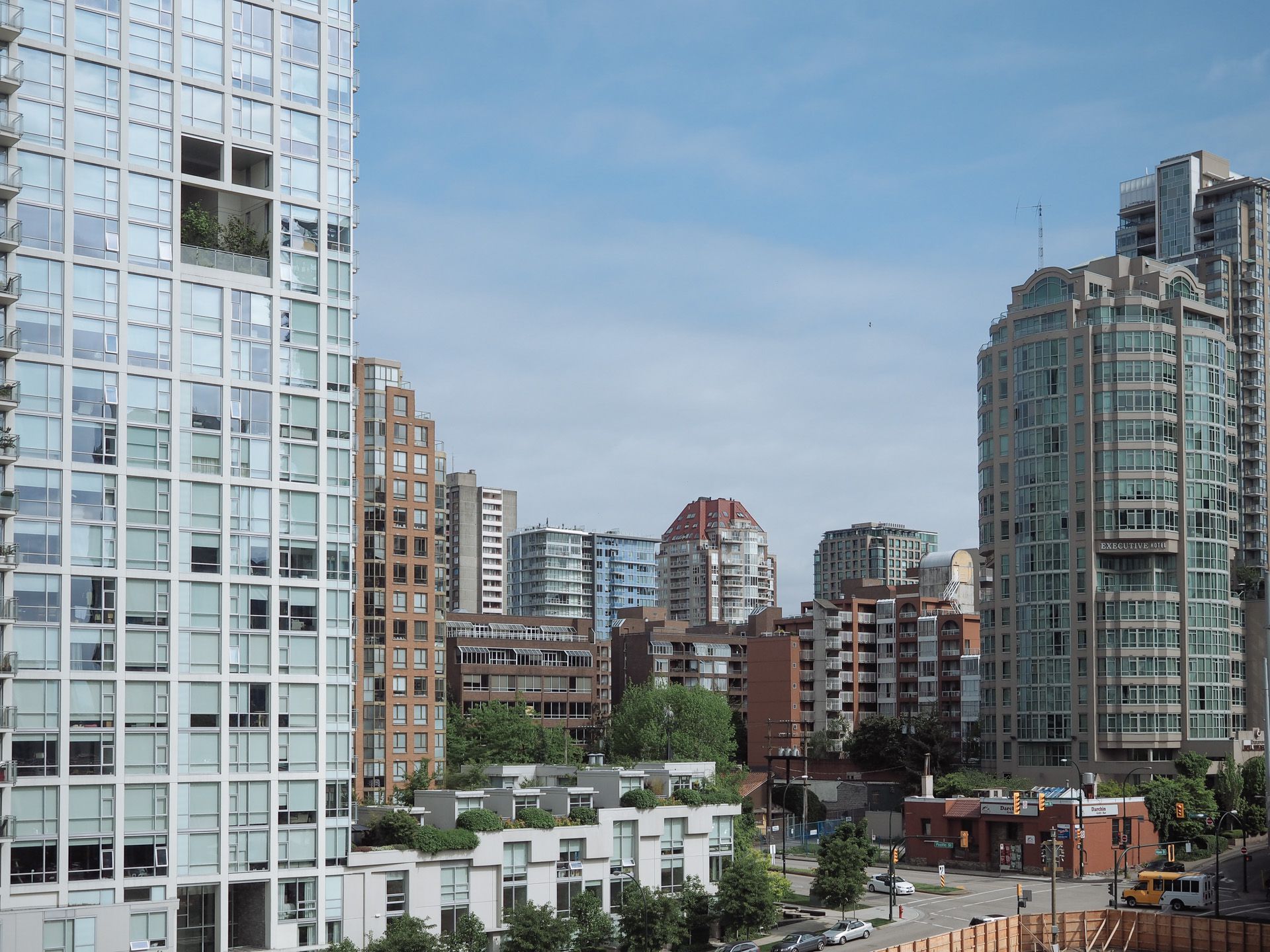 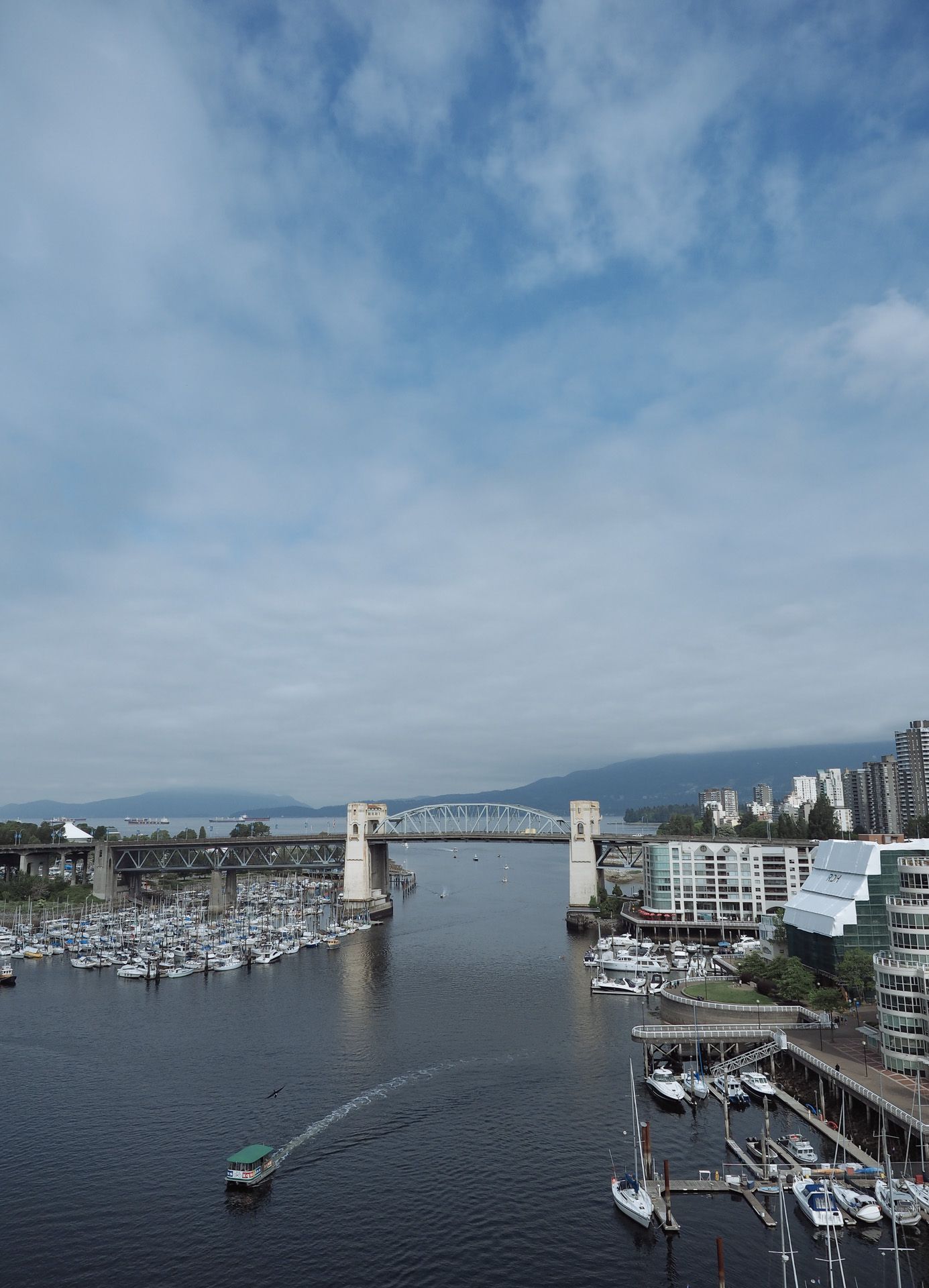 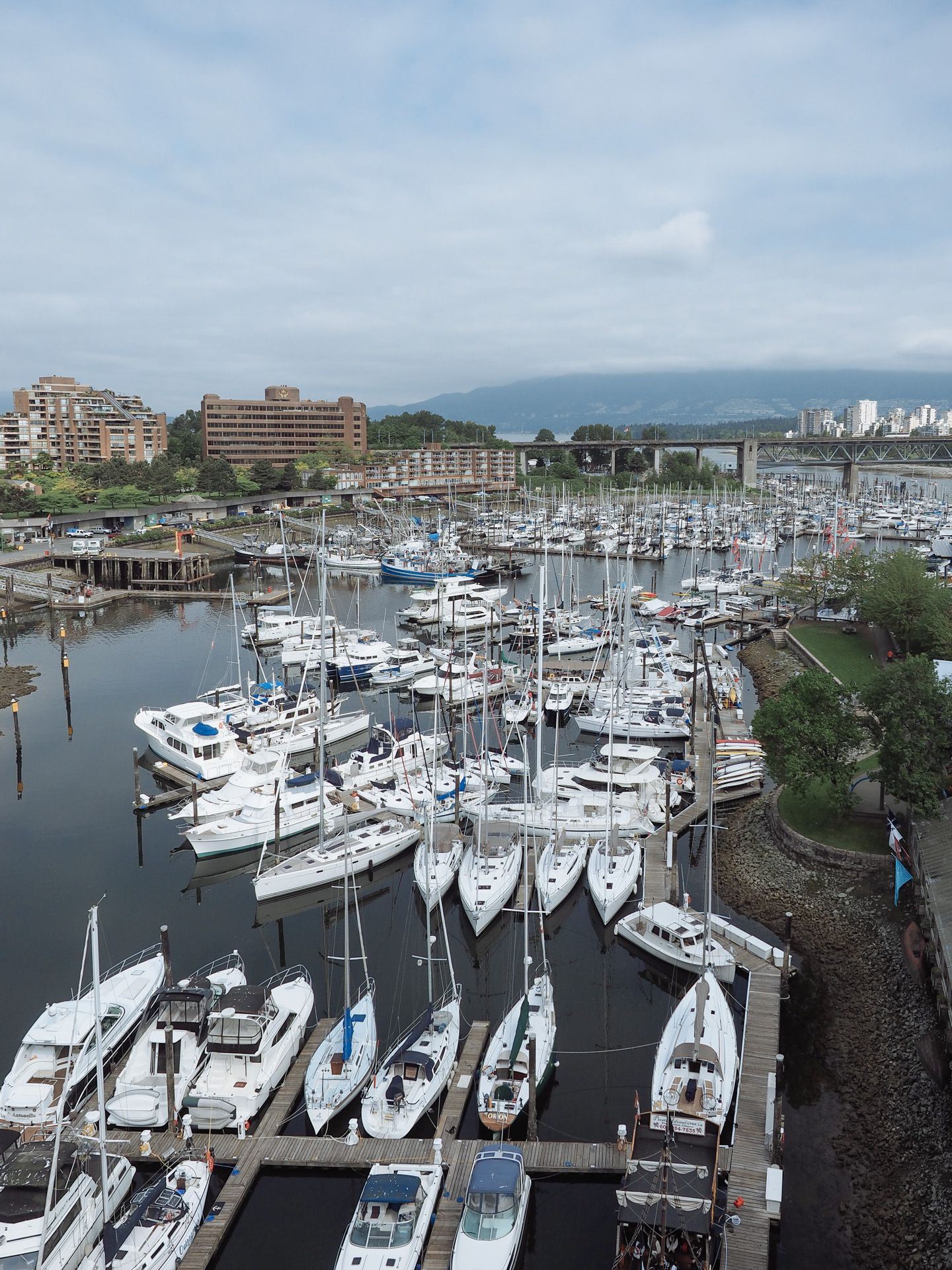 One of the benefits of making the long trek down Granville Street was the opportunity to walk across the Granville Street Bridge. It painted the Burrard Bridge on the horizon for some fantastic photos and it showed us a different view of the False Creek skyline.

I could have stood at the top of that bridge for an hour and still wanted more time to take in everything down below. 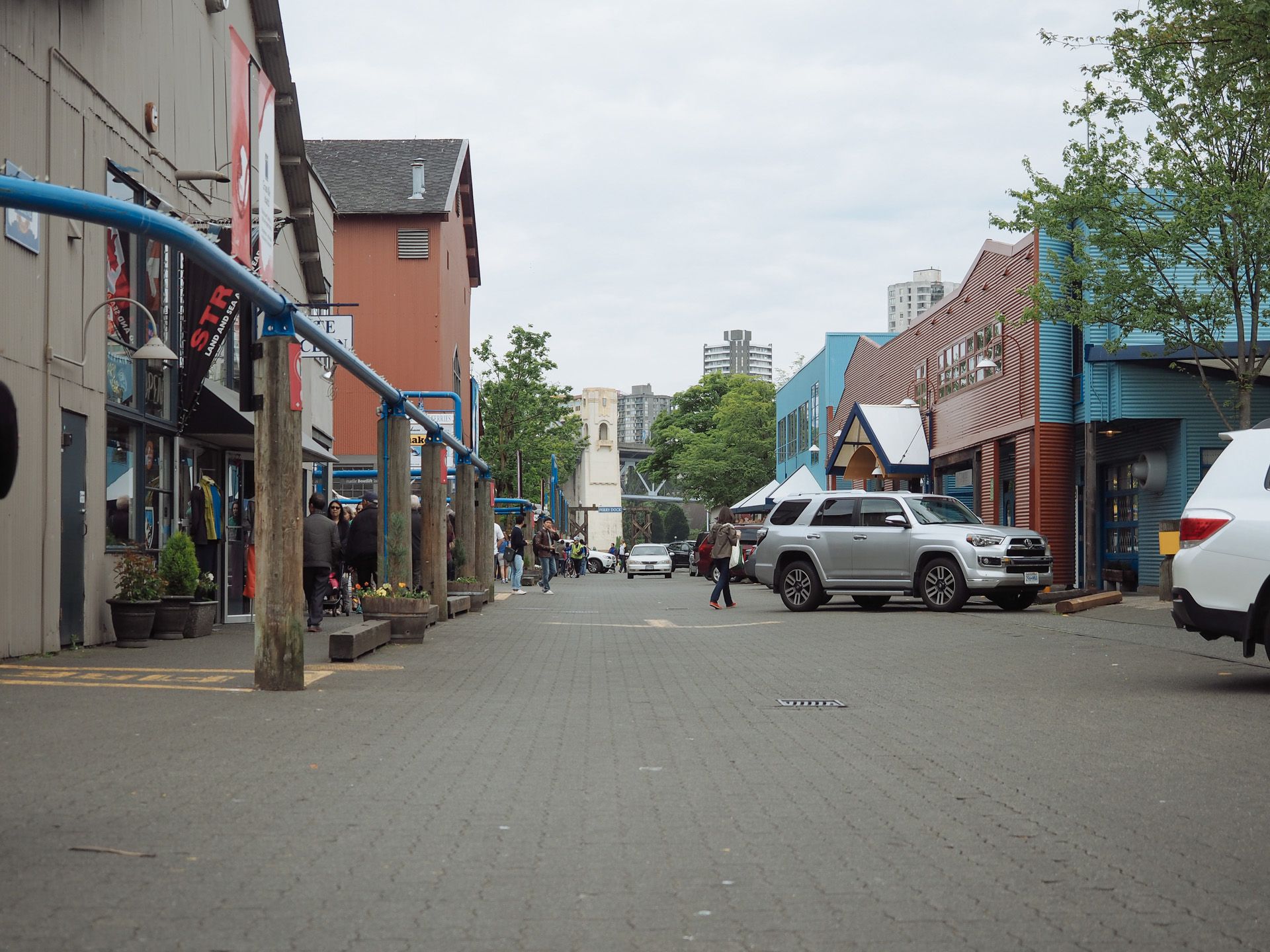 Granville Island is essentially a large public market district in the middle of the city. It boasts some unique restaurants and some of the coolest shops we could find. I found myself walking into artisan shops on numerous occasions to marvel at the large paintings and photographs hanging on the walls. There was a wine shop that housed every kind of wine I could ever imagine and there were public squares for sitting and resting. Overall, the district had a hip and intimate feeling to it. 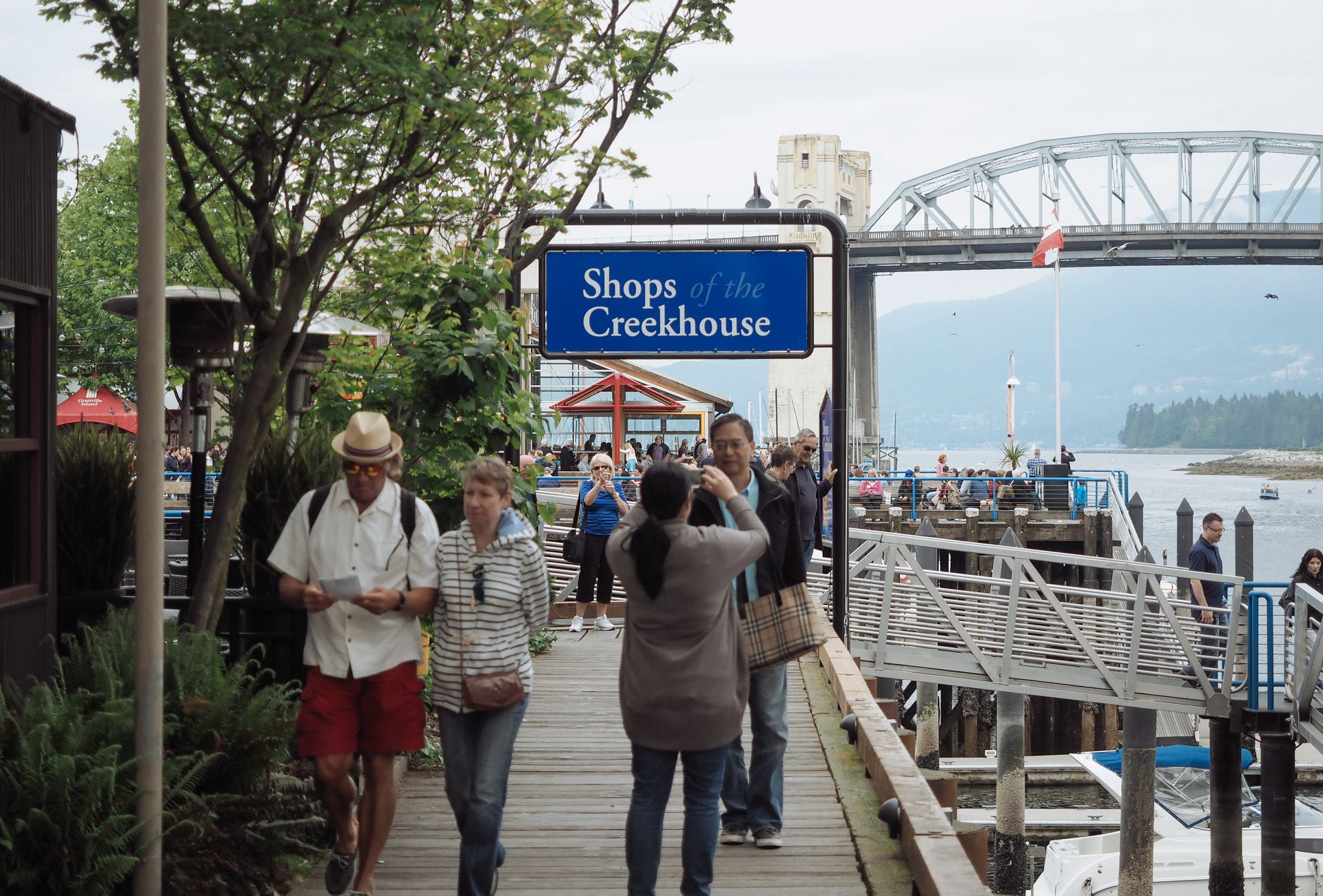 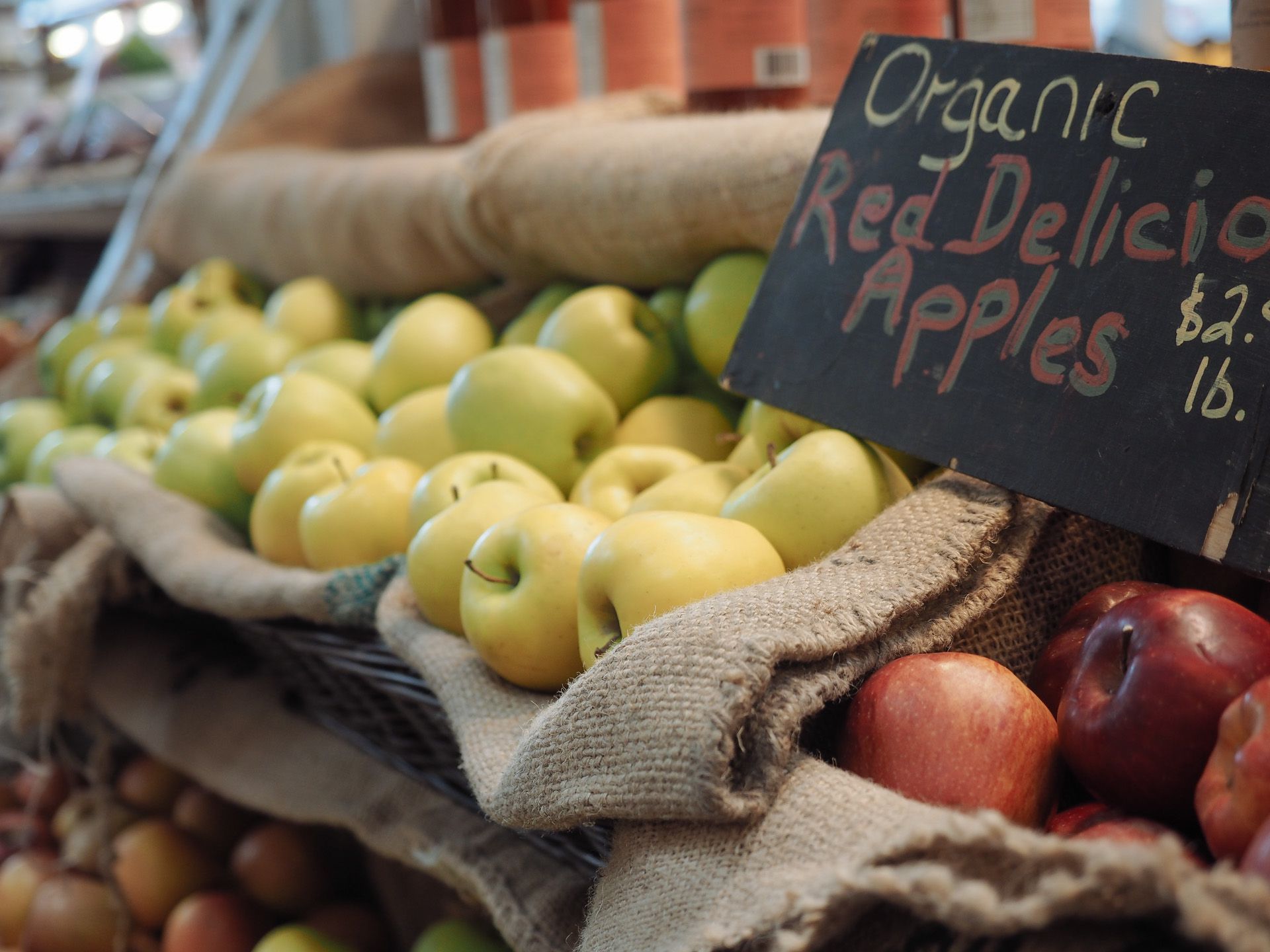 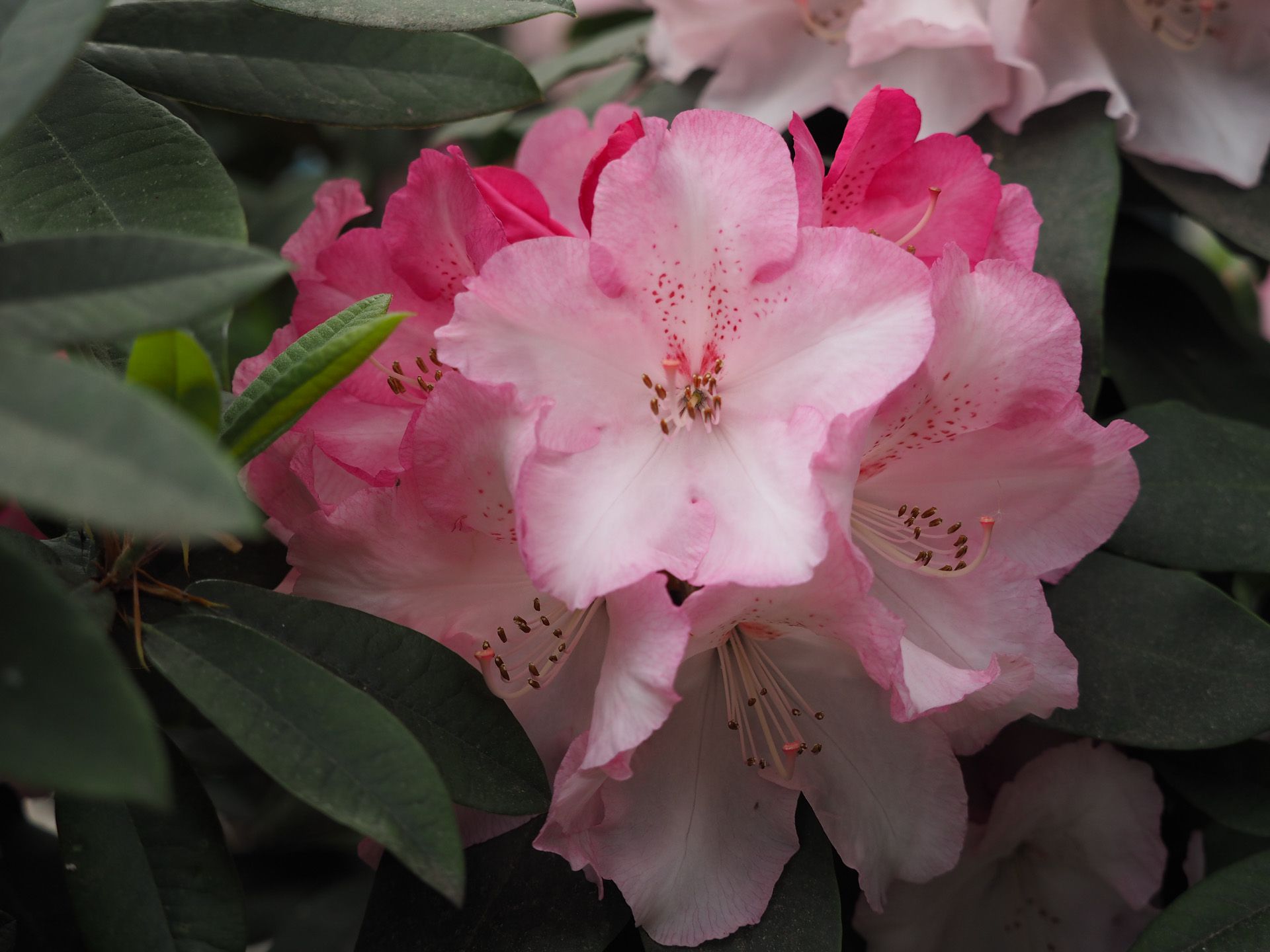 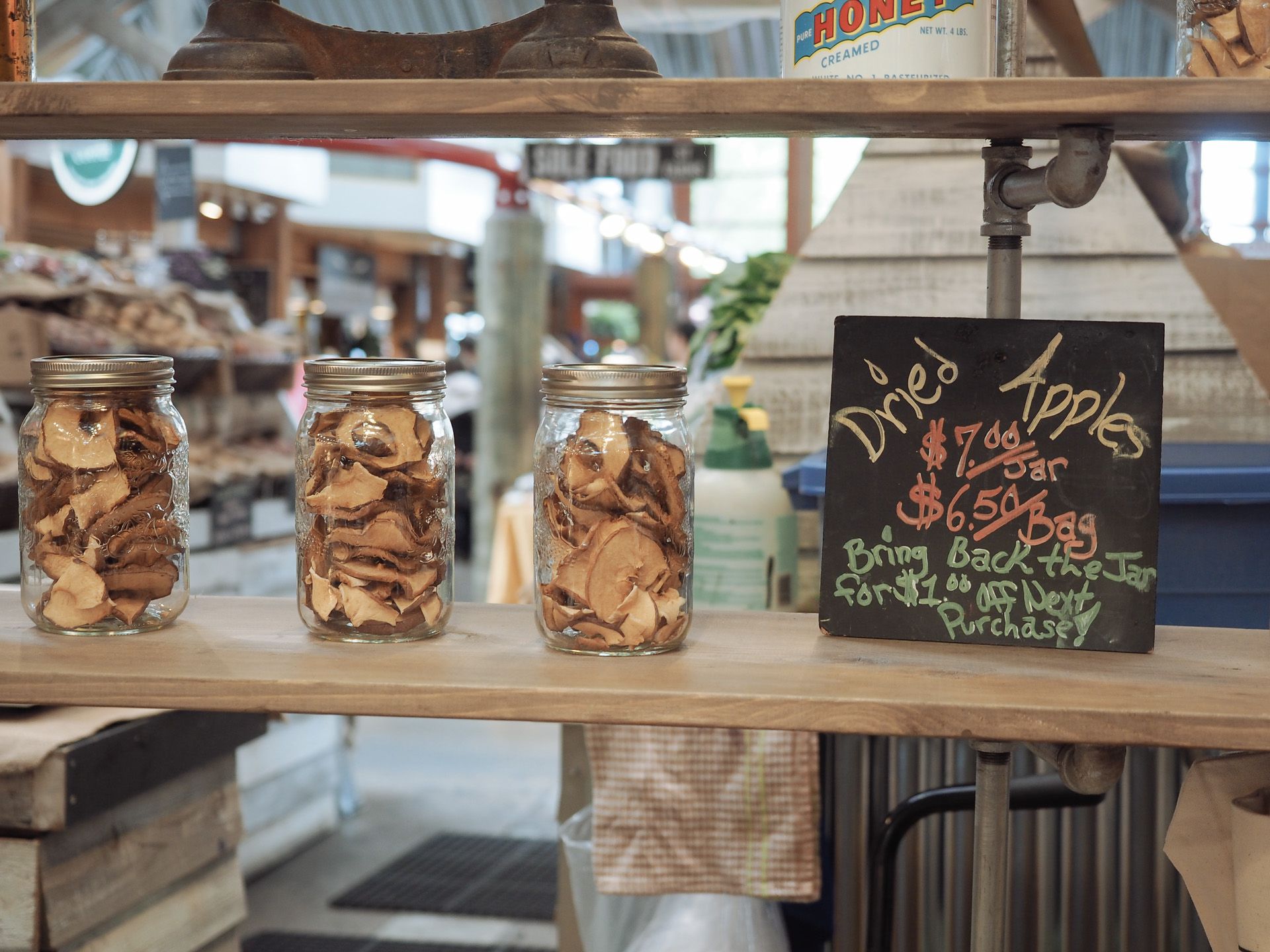 However, the cost of the public market set me back a step. I was blown away by the expense in doing your grocery shopping at the market. I’m unsure if this is standard across the world, but prices seemed astronomical. One lady looked to purchase a small bag of 30 crabapples. After hearing the price of the bag, she decided to only take about 15 crabapples. Those 15 crabapples still cost her about $14.

My parents have so many crabapples growing in their garden they have to throw hundreds of them out every year. At almost $1/crabapple, I think we need to find a way to export them to Vancouver. 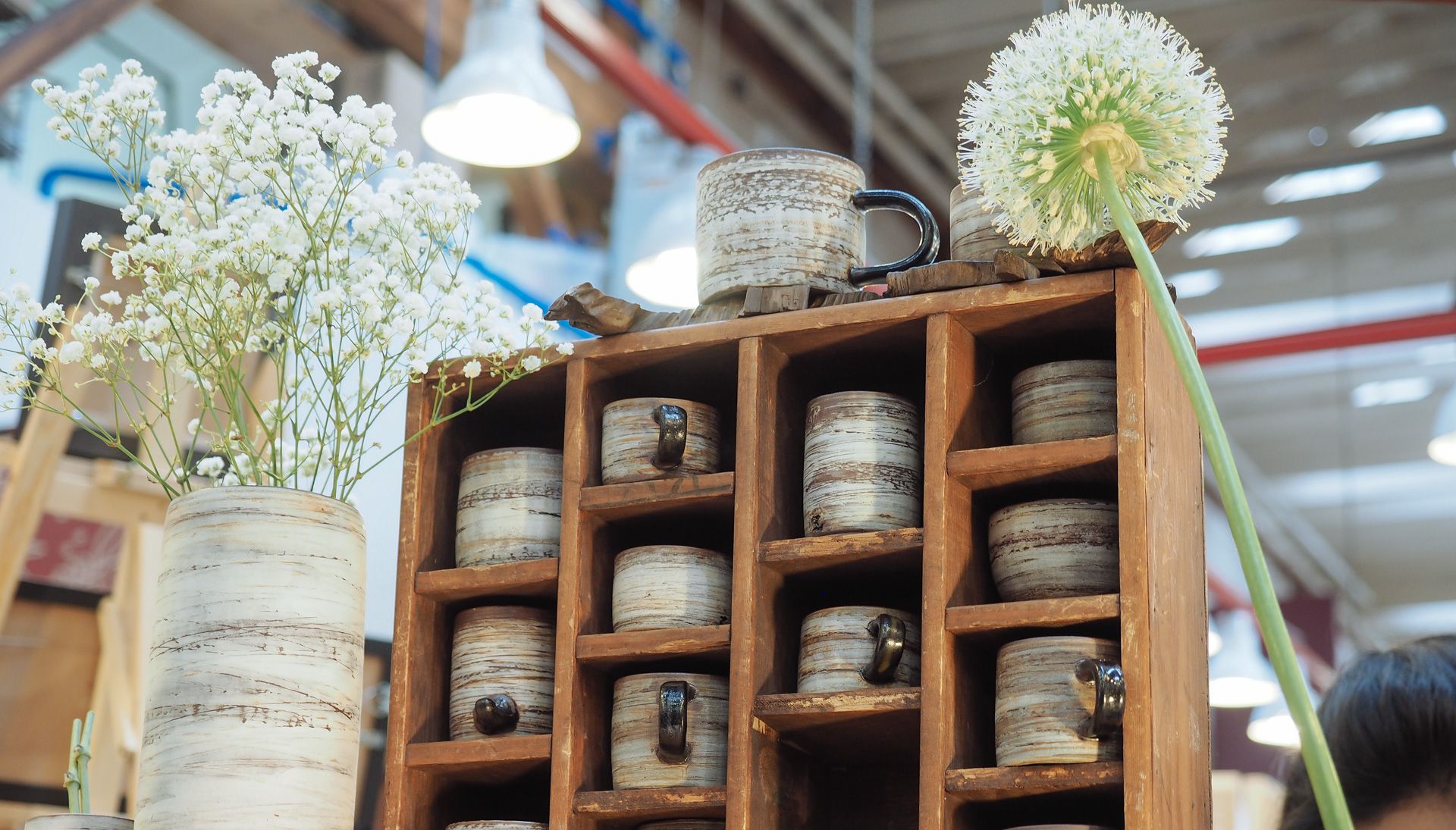 If those prices were high for other goods, such as the pottery seen above, I would be far more understanding.

But for simple crabapples? Come on. 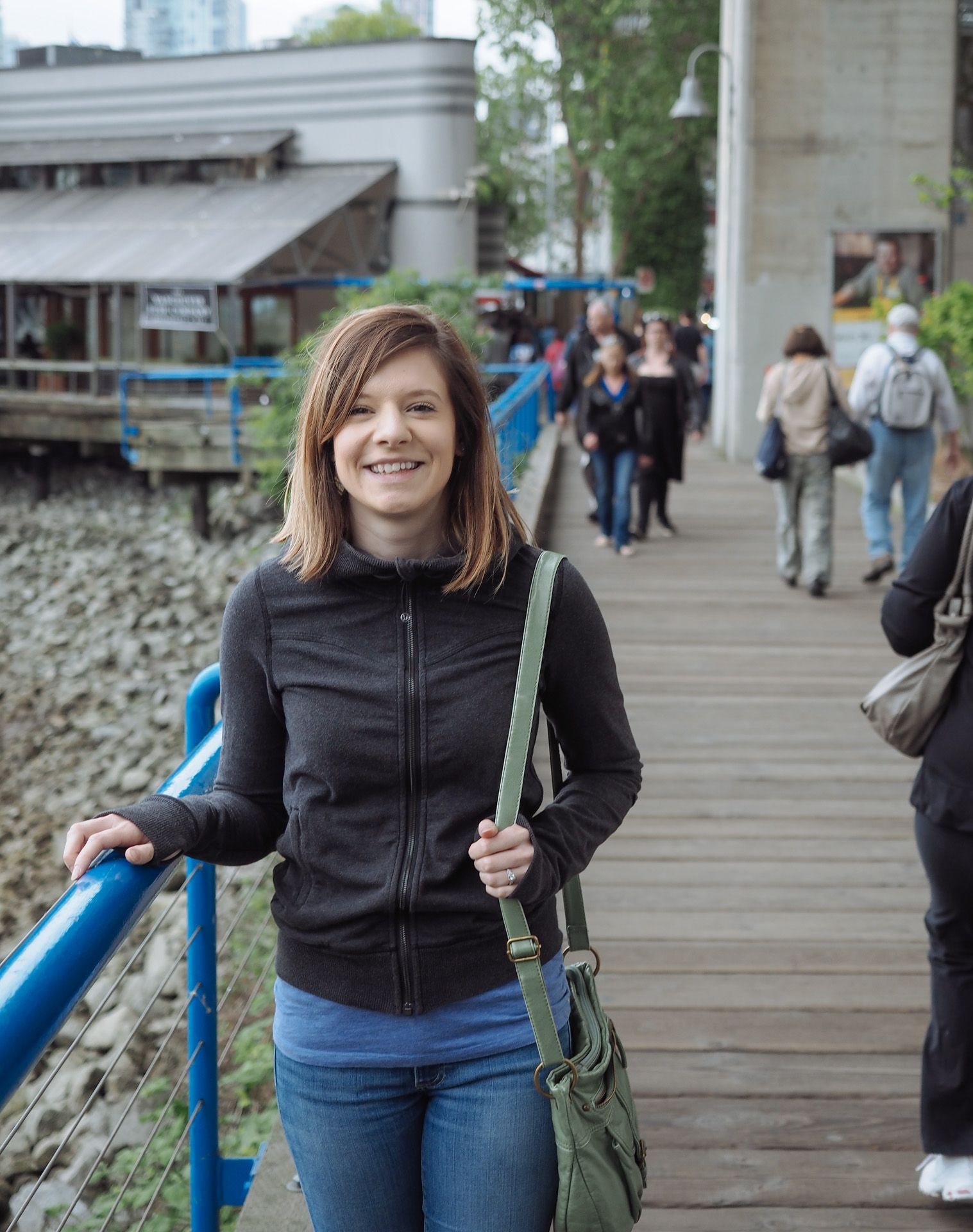 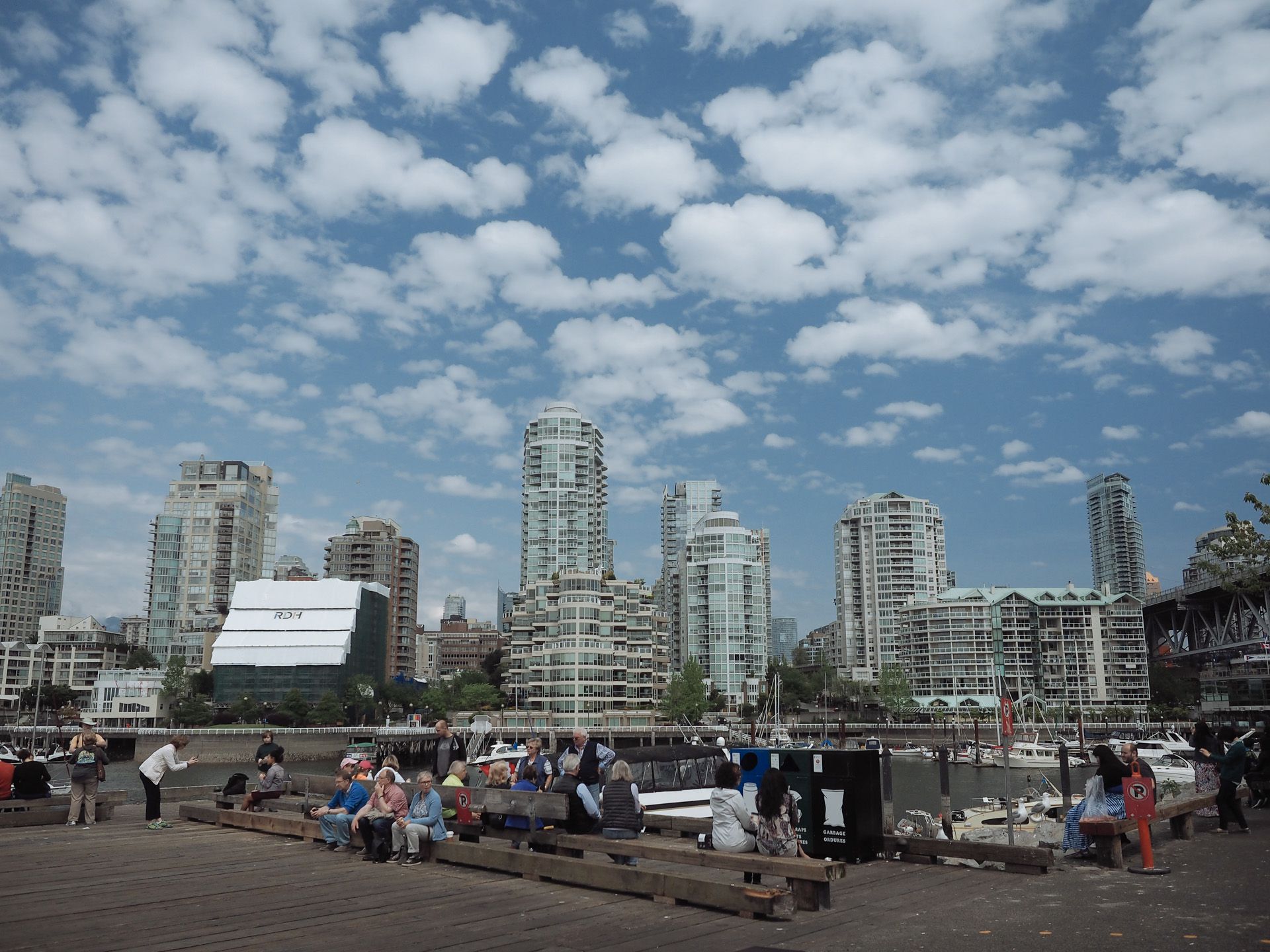 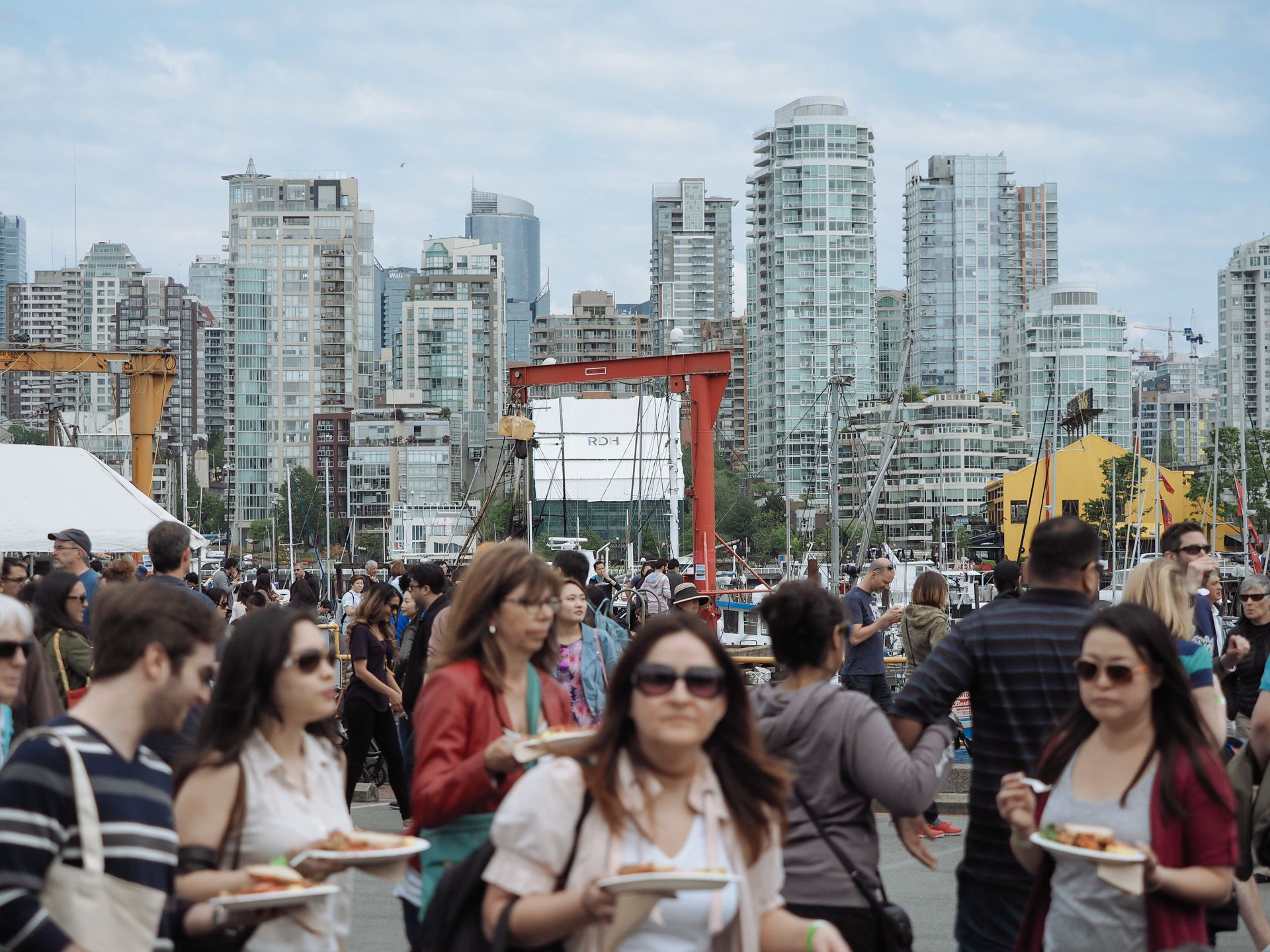 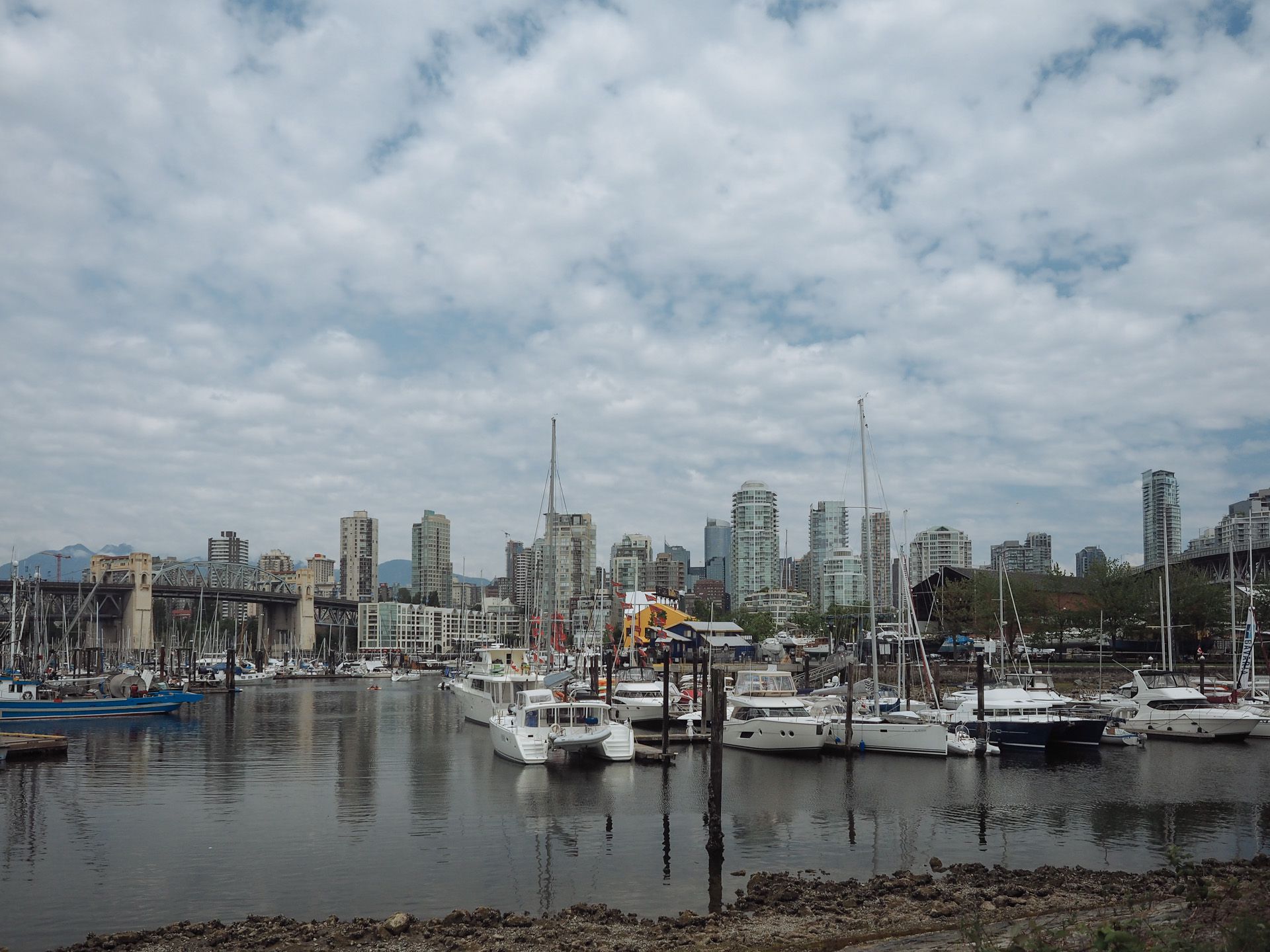 Outside the market, Granville’s character reigned supreme. It was another great chance to shoot photos of the all-glass buildings lining the waterfront and the clouds screamed for some polarizer use. I, along with many other photographers, had a lot of fun street-shooting the Granville area. There were cameras everywhere. 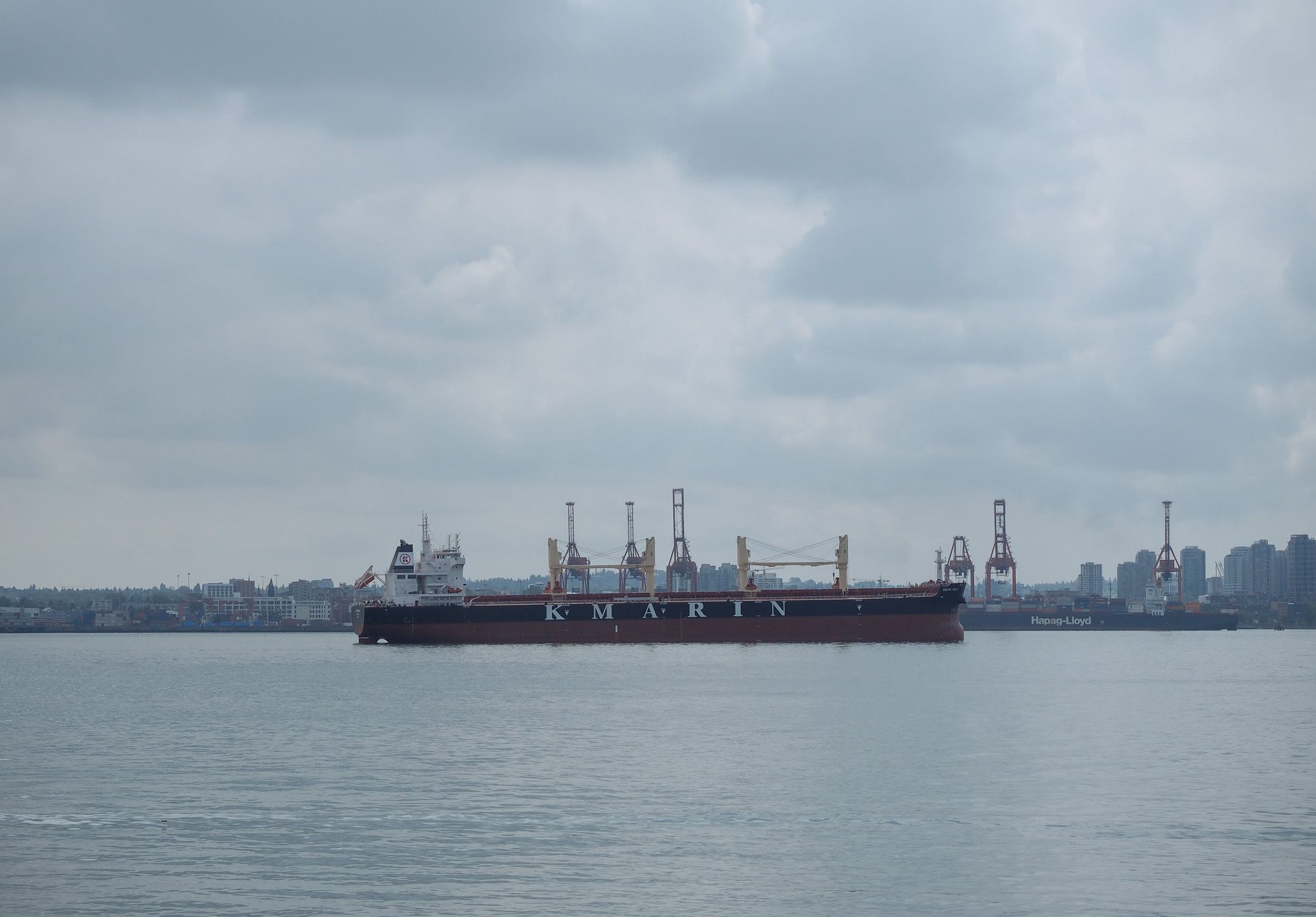 After our Granville Island exploration, we hopped aboard a bus that took us back to the Waterfront train station. Waterfront is the end of the Canada Line, but it is the entrance to the SeaBus which takes travellers to North Vancouver. Since it was included in our TransLink Day Pass, Jac and I hopped on the 15 minute SeaBus ride to North Vancouver.

So we made a quick, rash decision to take the almost two hour bus ride to West Vancouver and walk through Lighthouse Park.

It was the best decision we made during our trip.

Getting to Lighthouse Park via bus was a little more work than we had undertaken to that point in time, but it was fairly straightforward after all the help from the bus drivers.

We took bus 253 from Lonsdale Quay to the Park Royal Mall and then transferred to bus route 250 - Horseshoe Bay. Finally, we got off at the Beacon Lane bus stop.

The bus dropped us off seemingly in the middle of nowhere. Beacon Lane is just that — a lane. You walk down this cozy lane — almost intrusively — until you reach a provincial park hidden at the end of the road. I’m not sure why Vancouver chooses to hide Lighthouse Park — it’s easily the most beautiful park we visited during our trip. 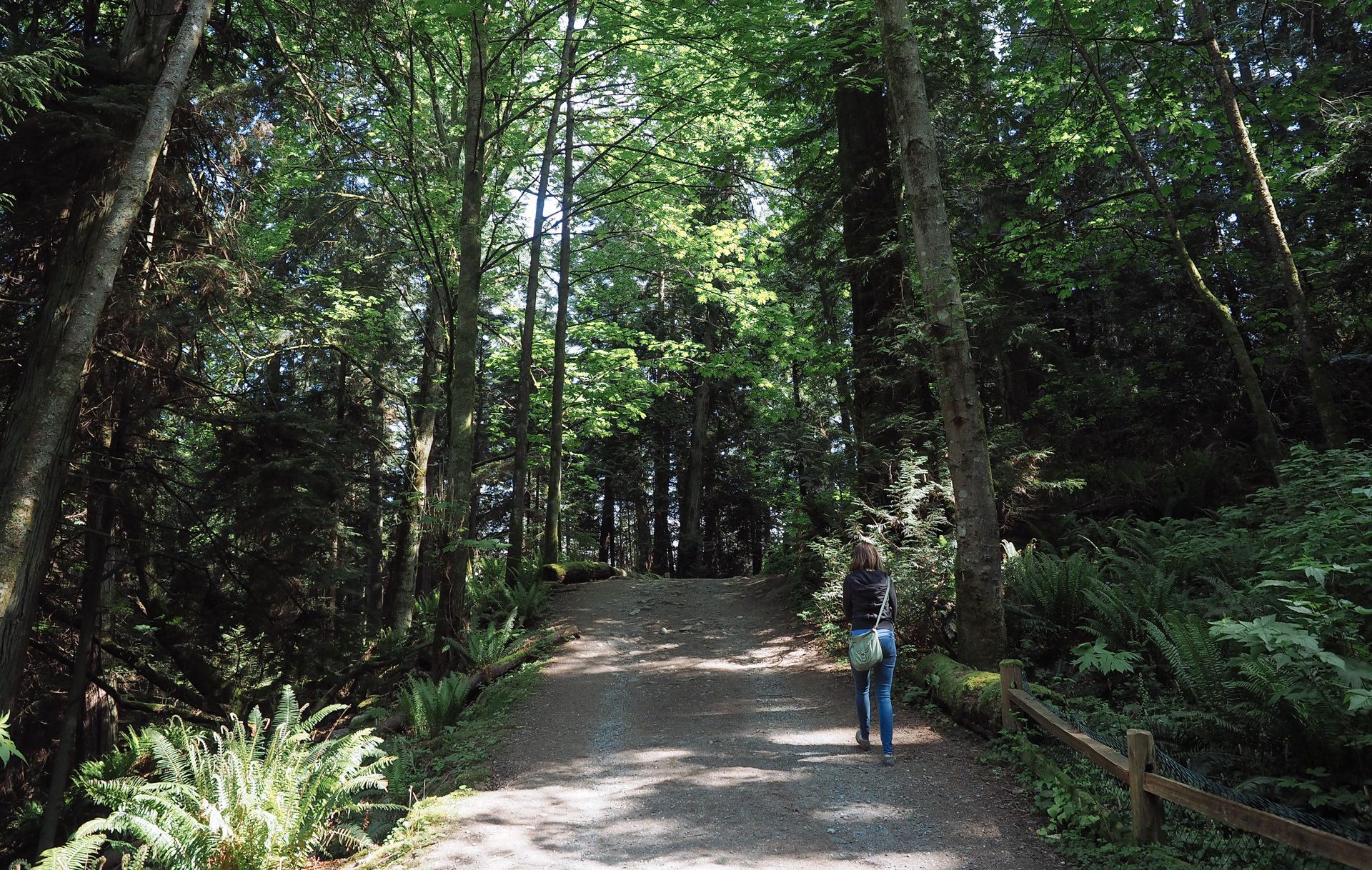 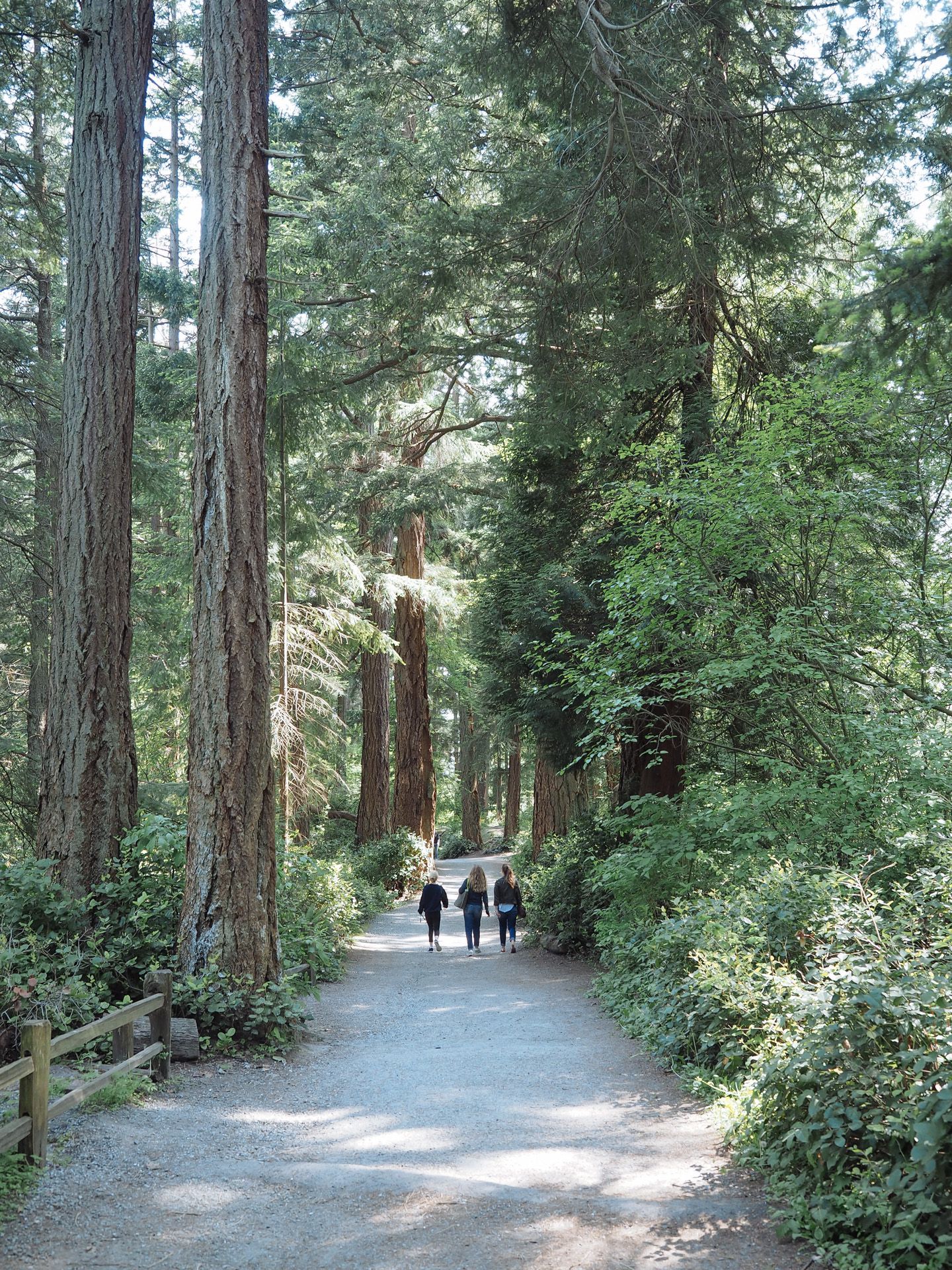 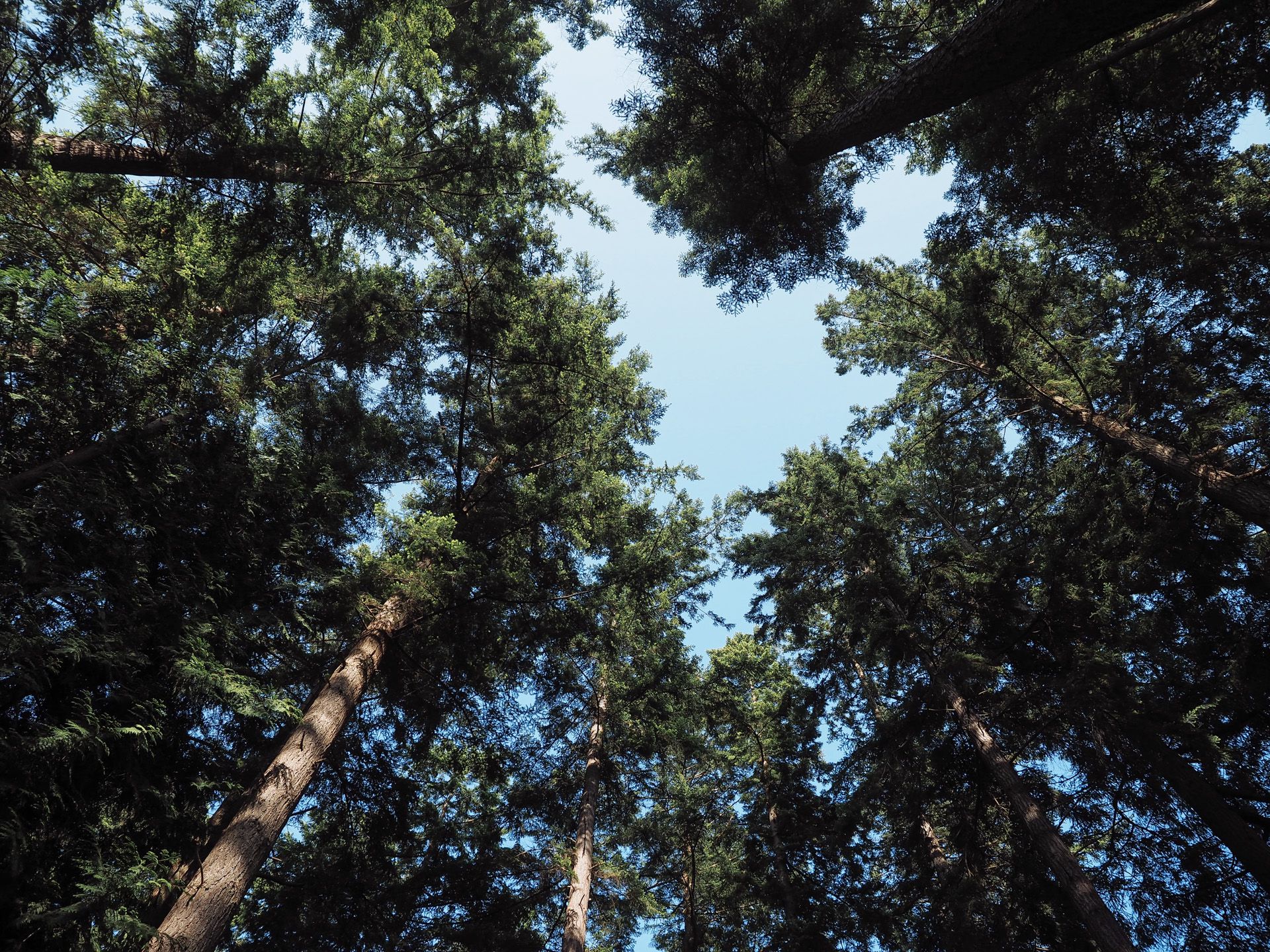 The gigantic Douglas Firs soared above our heads and created a quiet environment for hikers and explorers to find some peace from the big city life. Although nature thrived in the park, many of the main paths were partially paved and there were washrooms with proper plumbing. Not-so-travelled paths were still visible and attainable, although Jac and I did have to climb the occasional rock to get to the next spot. 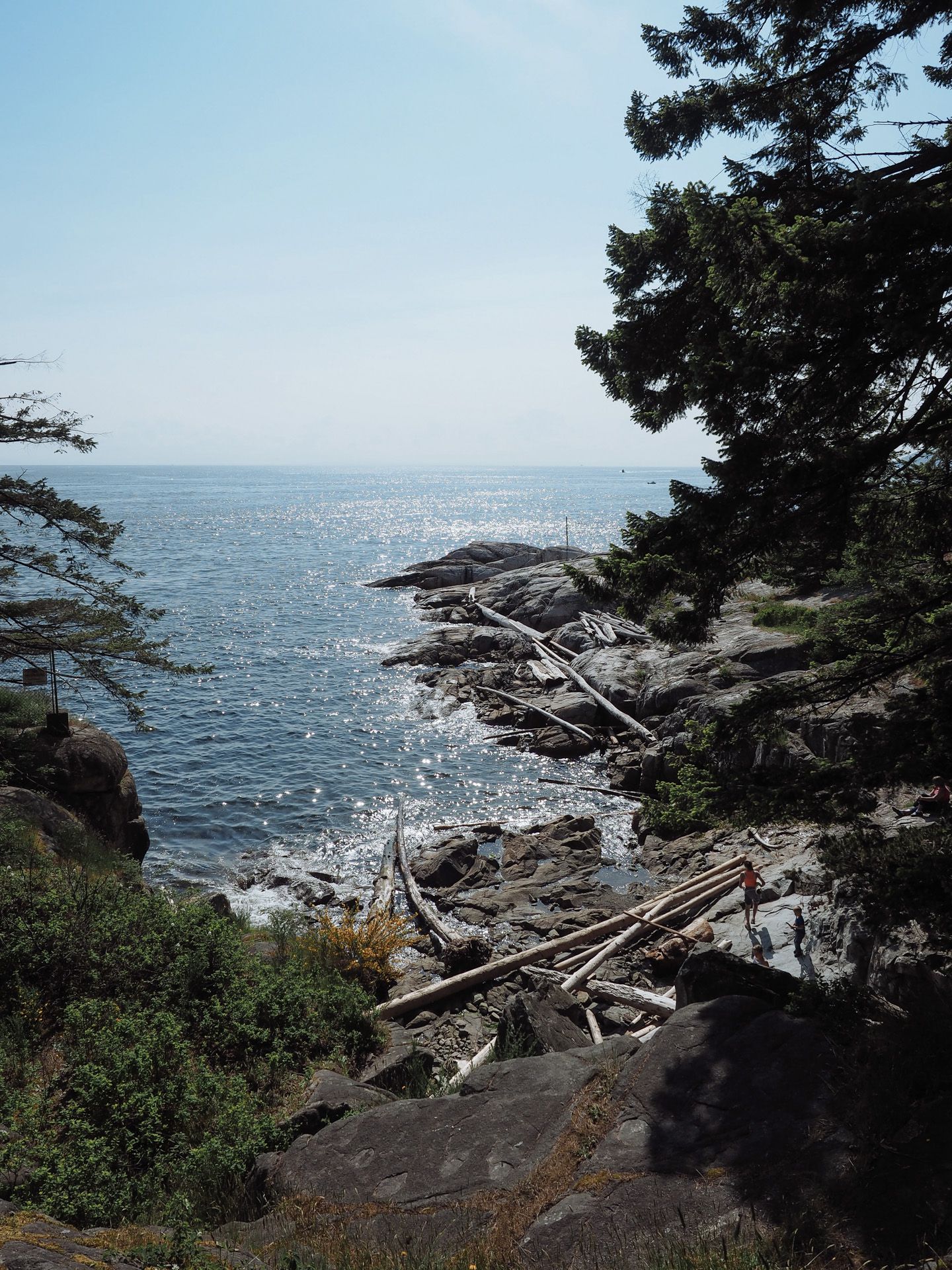 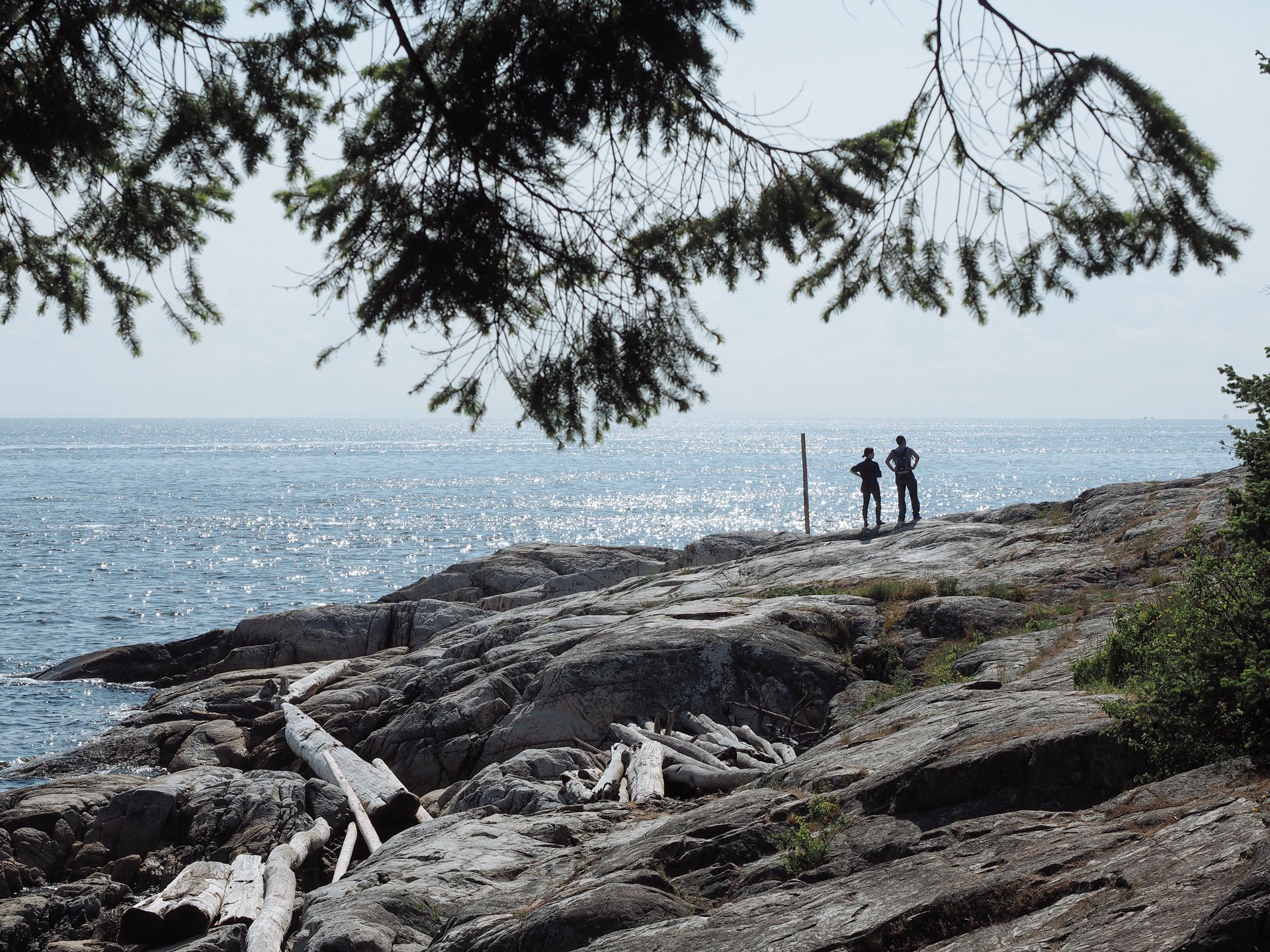 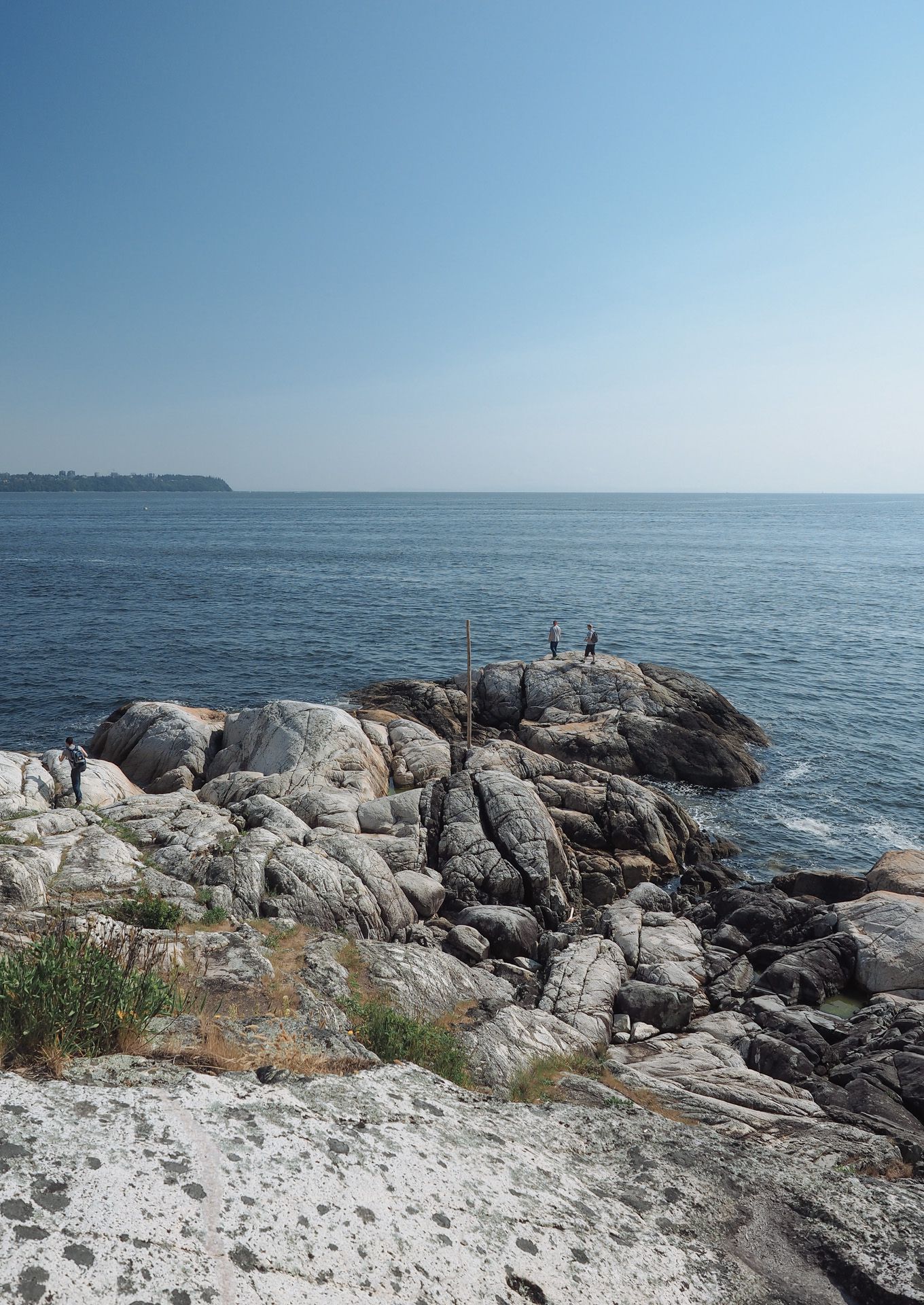 What awaited us at the end of the hiking trail was nothing short of breath taking. Combine the scene with a perfect set of fluffy white clouds, and my camera didn’t stop firing.

I probably took 75 photos of that lighthouse. I just couldn’t get enough of it. 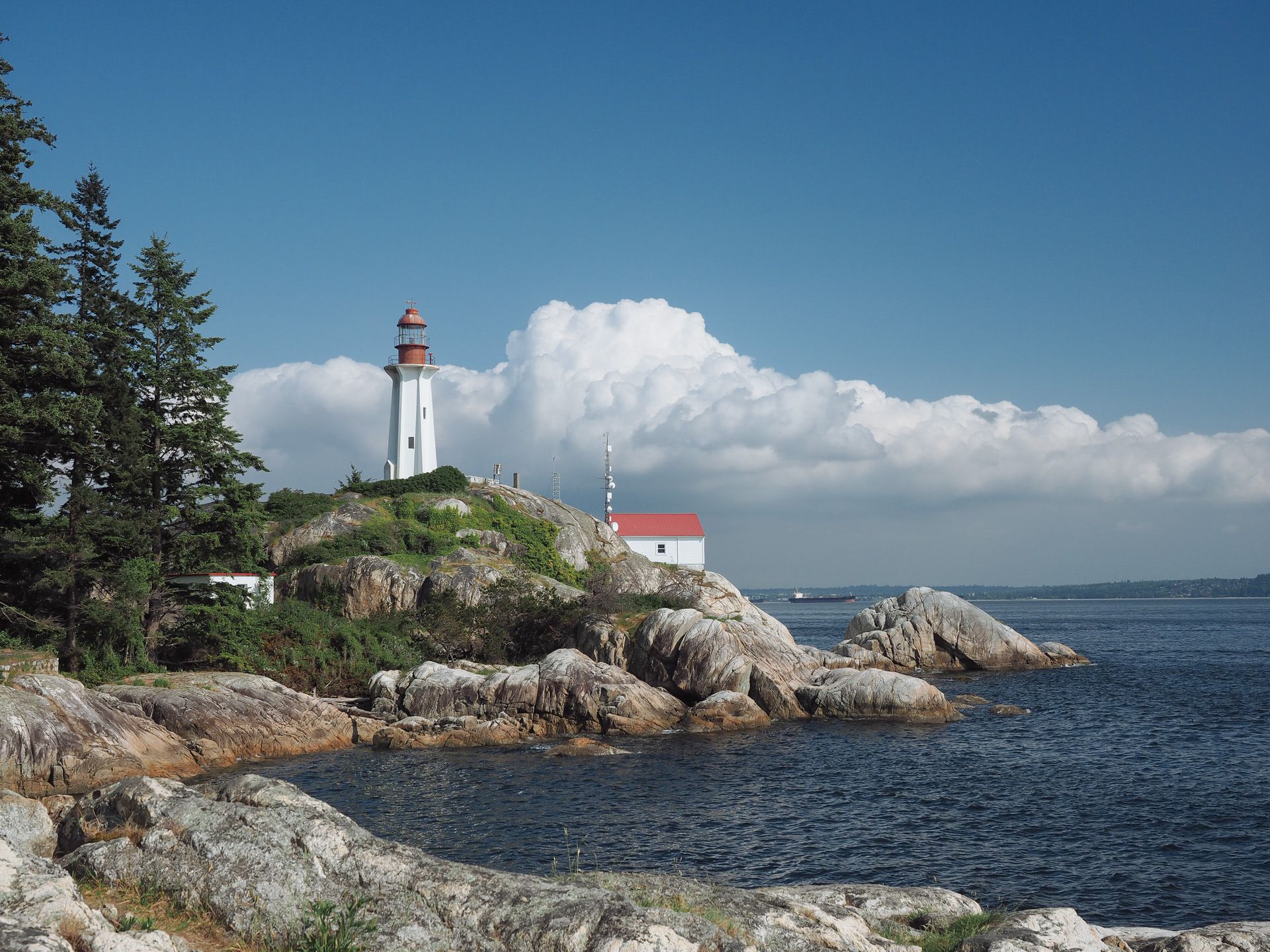 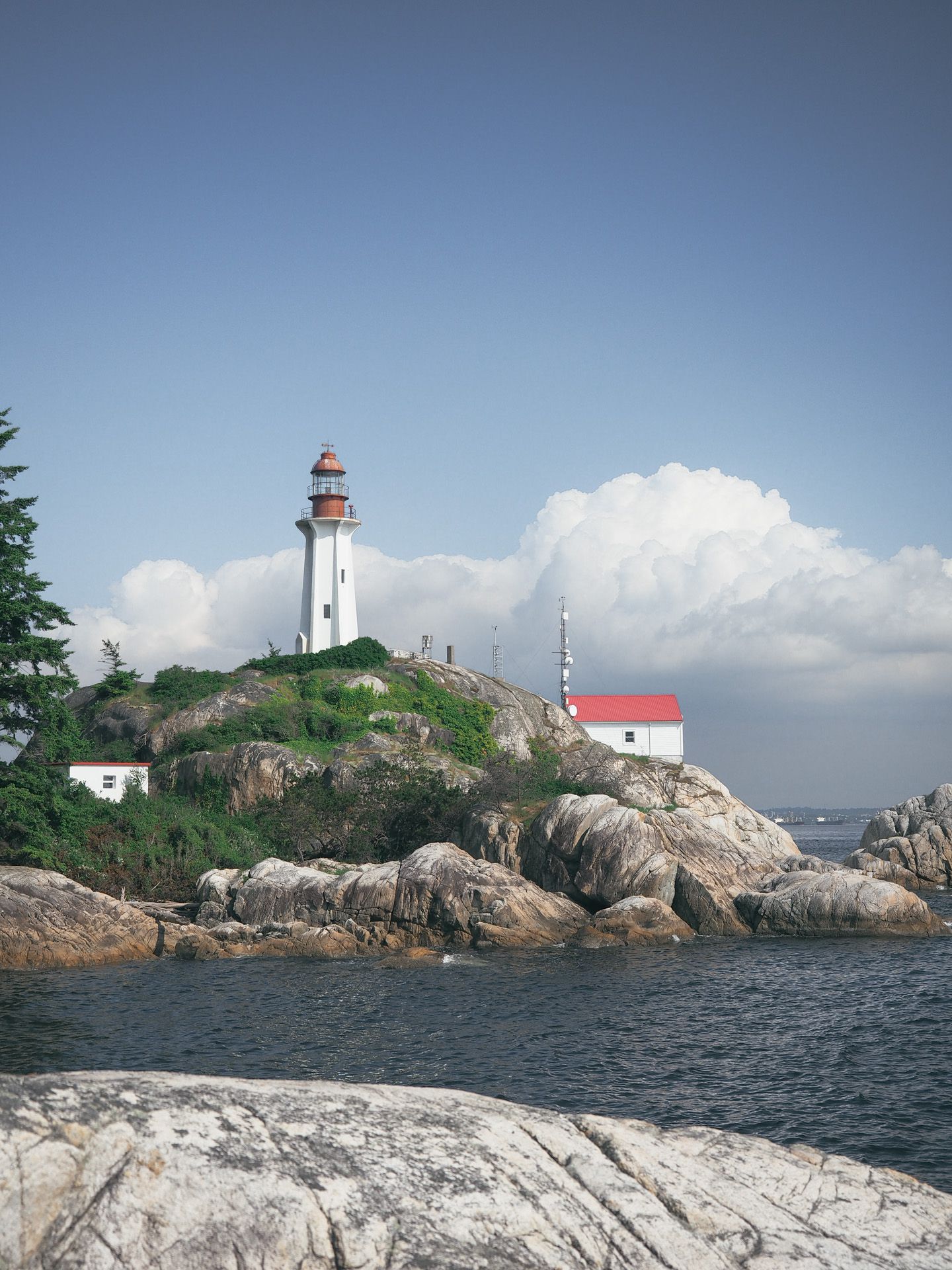 Lighthouse Park sits right at the tip of West Vancouver, where ships enter the Vancouver port from the treacherous Pacific. Again, although I’m not a mariner of any sort, I can only imagine the sense of relief this lighthouse provided for sailors coming home from sea.

The sunlight was dazzling that Saturday afternoon and the flickering glares from the ocean took our breath away. We sat on those rocks for over an hour, basking in the sun with our white Manitoban skin.

It was a beautiful day. 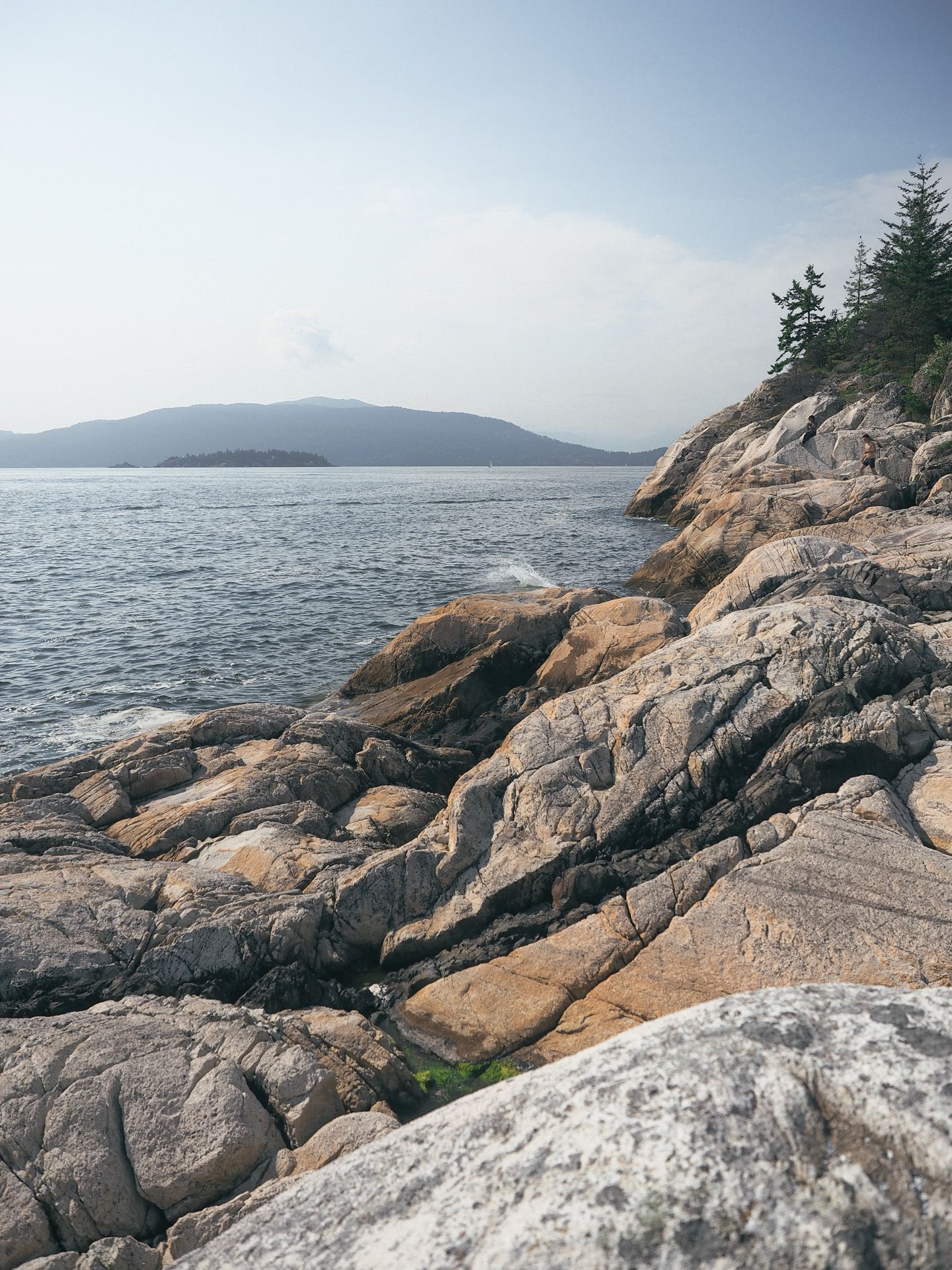 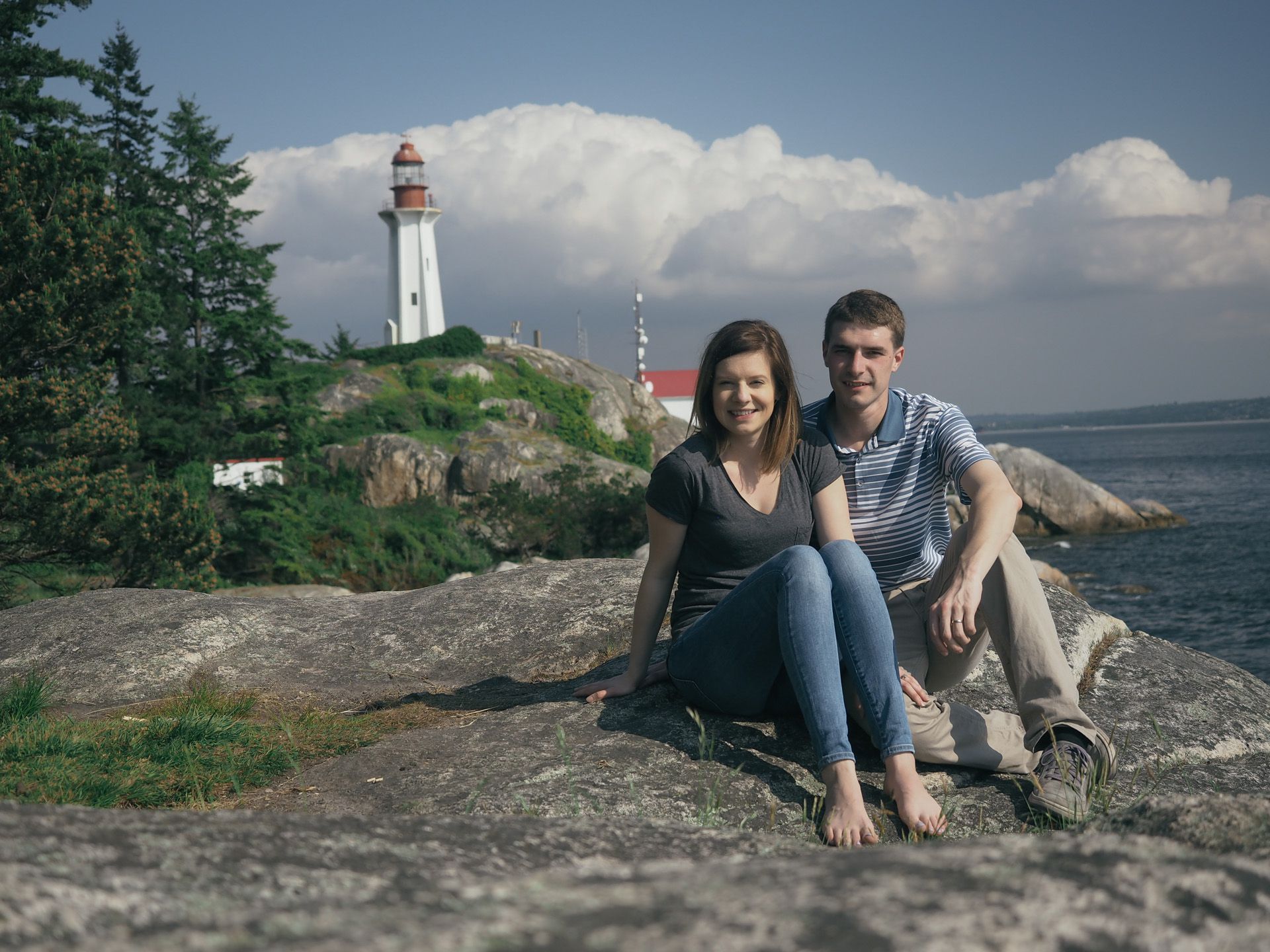 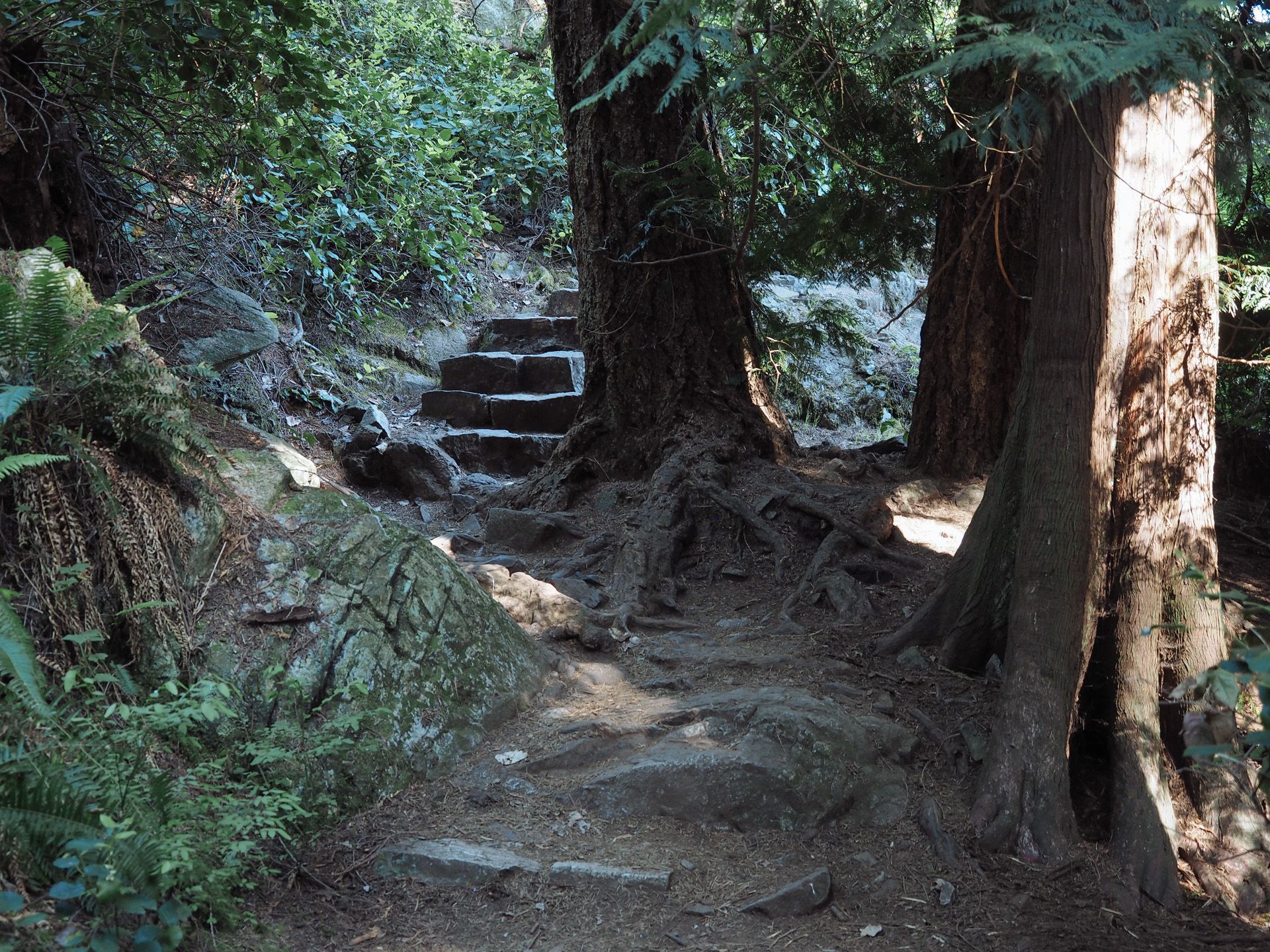 When we finally convinced ourselves it was time to leave, we hiked the trek back through the provincial park, up Beacon Lane, and waited at the bus stop for about a half hour. We took the same route back from whence we came.

By the time we returned to our hotel, it was well past 8:00PM local time. We showered and ditched the camera before a late evening supper. After all the different restaurants we had tried over the last three days, we decided to head to The Keg for a celebratory dinner. I learnt that day I passed my course and, although it was just another course, I was a little proud of the success. What better way than to wash down a beautiful day with a glass of wine and a perfectly cooked steak.

Our last day in Vancouver was a relatively short one. Our flight left at 7:00PM local time, so we had until 5:00PM or so to voyage.

While there, they decided to try out some paddleboarding. The whole “physical activity” wasn’t the sort of thing Jac and I were up for that morning and early afternoon, so we walked through the unique Spot Prawn Festinal and then hopped on a bus down to the Waterfront station. From the station, we made the short walk to Vancouver’s historic district of Gastown.

There are many districts in Vancouver worth visiting for the sake of beauty alone, and Gastown is right at the top of the list. The streets are lined with cobblestone and the buildings have one of the oldest styles of architecture in the city. 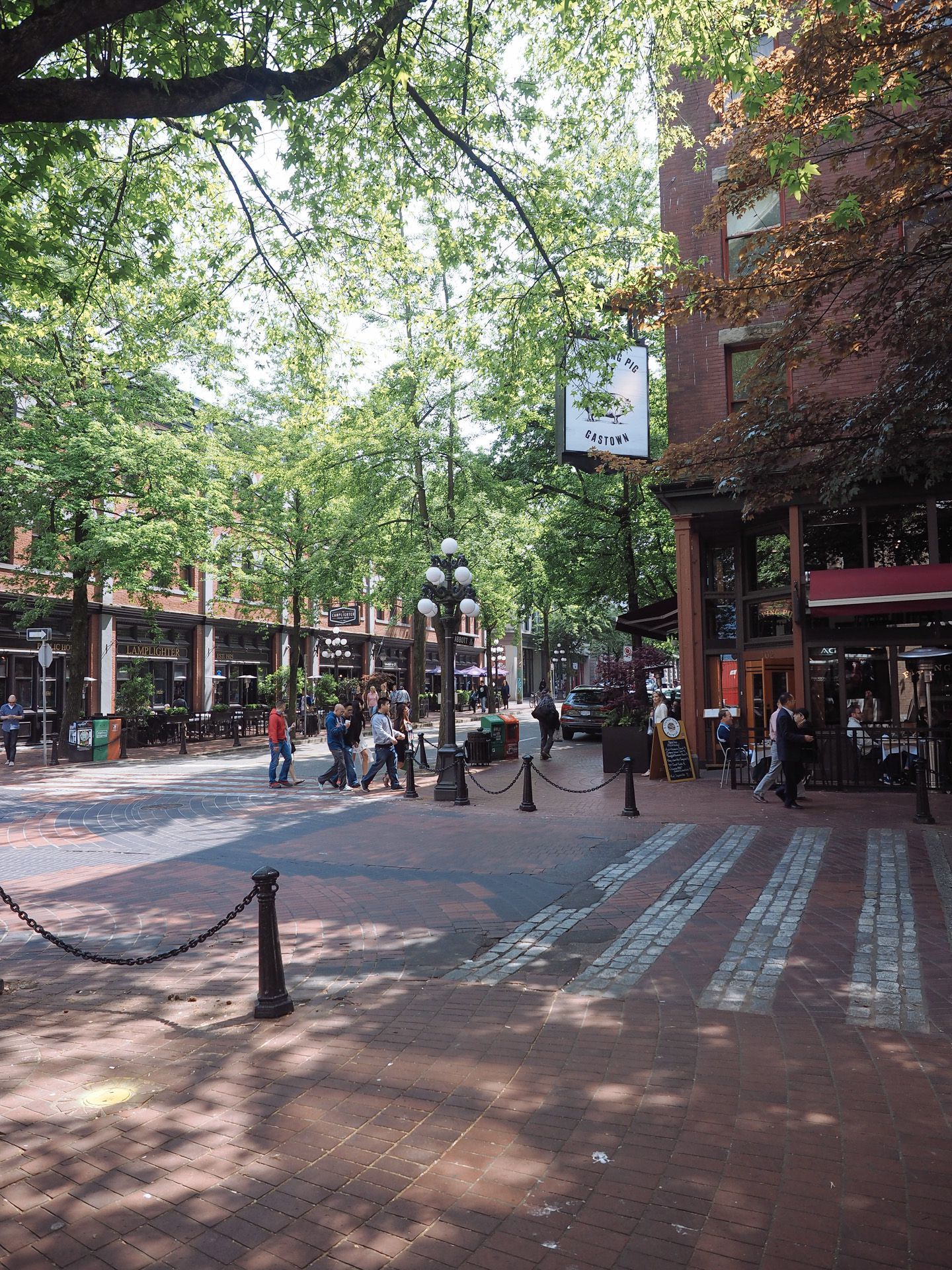 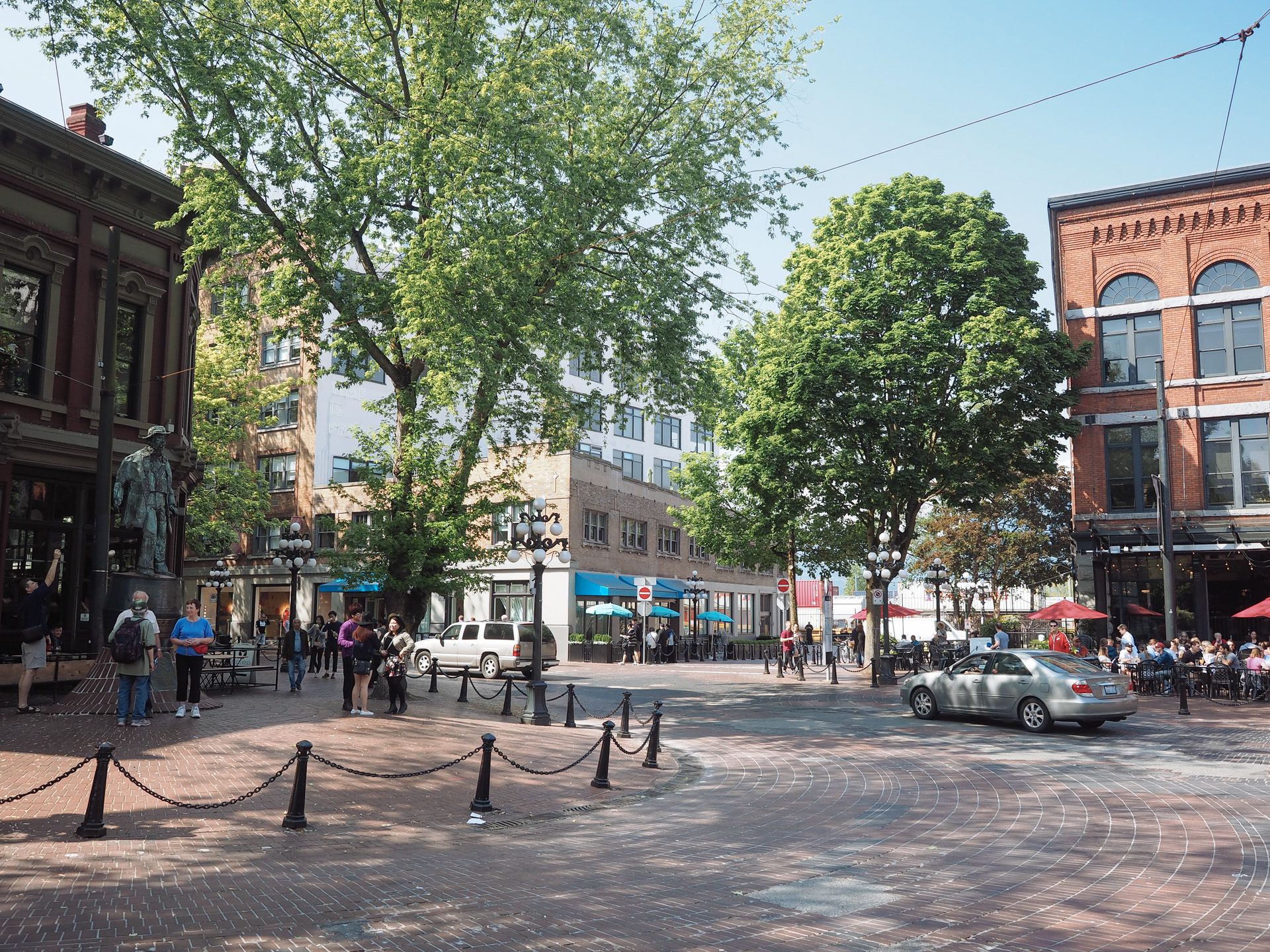 I’m not as well travelled as some, but architectural styles are an easy aspect to compare from city to city. Architectural styles travel in waves and in historic periods, and Vancouver’s Gastown district was a nice reminder that this city still went through an “old’n day” period at one point in time. With every other building being made of glass, it would be easy to mistaken Vancouver for a very young city which sprung on the heels of a gold-rush-type event. Instead, Gastown served to show Vancouver’s earlier roots. 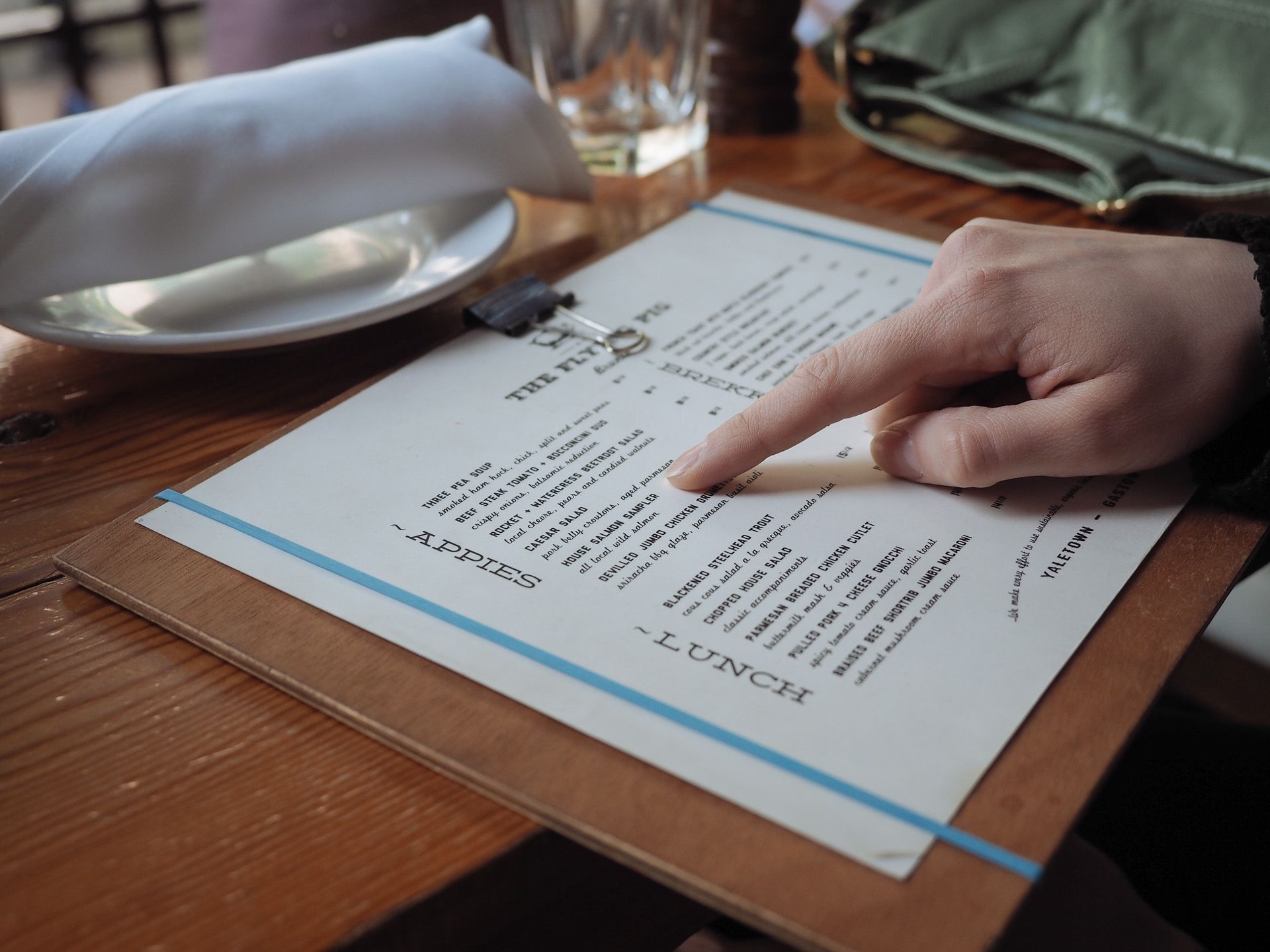 One of my favourite people to follow these days is Paul Stamatiou. He visited Vancouver a while back and I remembered his section on Gastown while we were walking those very streets. I quickly pulled up his post to find his restaurant of choice: The Flying Pig. We quickly found the restaurant and decided to try it out for ourselves. 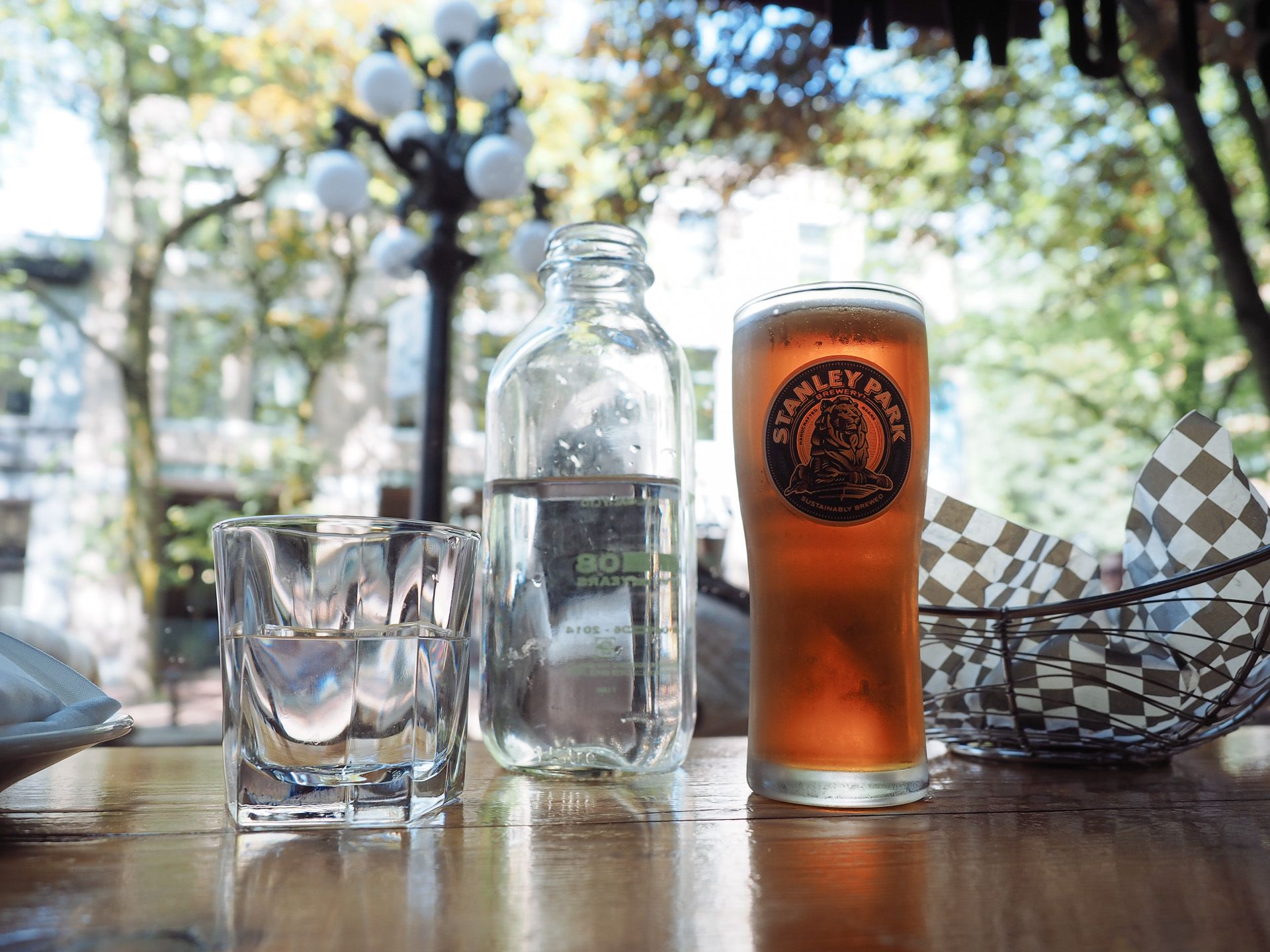 I had yet to try any locally brewed beer, so I jumped on the Stanley Park Amber the moment we walked through the door. The beer was delectable and sprung a recent obsession with beer tasting.

Both Jaclyn and I also hadn’t jumped aboard the whole seafood thing despite the marine nature of Vancouver. Although not rare in Manitoba, “specialty” seafood like smoked salmon, salmon tartare, candied salmon, and salmon eggs were completely foreign to us. We decided to jump off the diving board and go for The Flying Pig’s Salmon Sampler.

It opened my eyes further than I would have ever imagined. 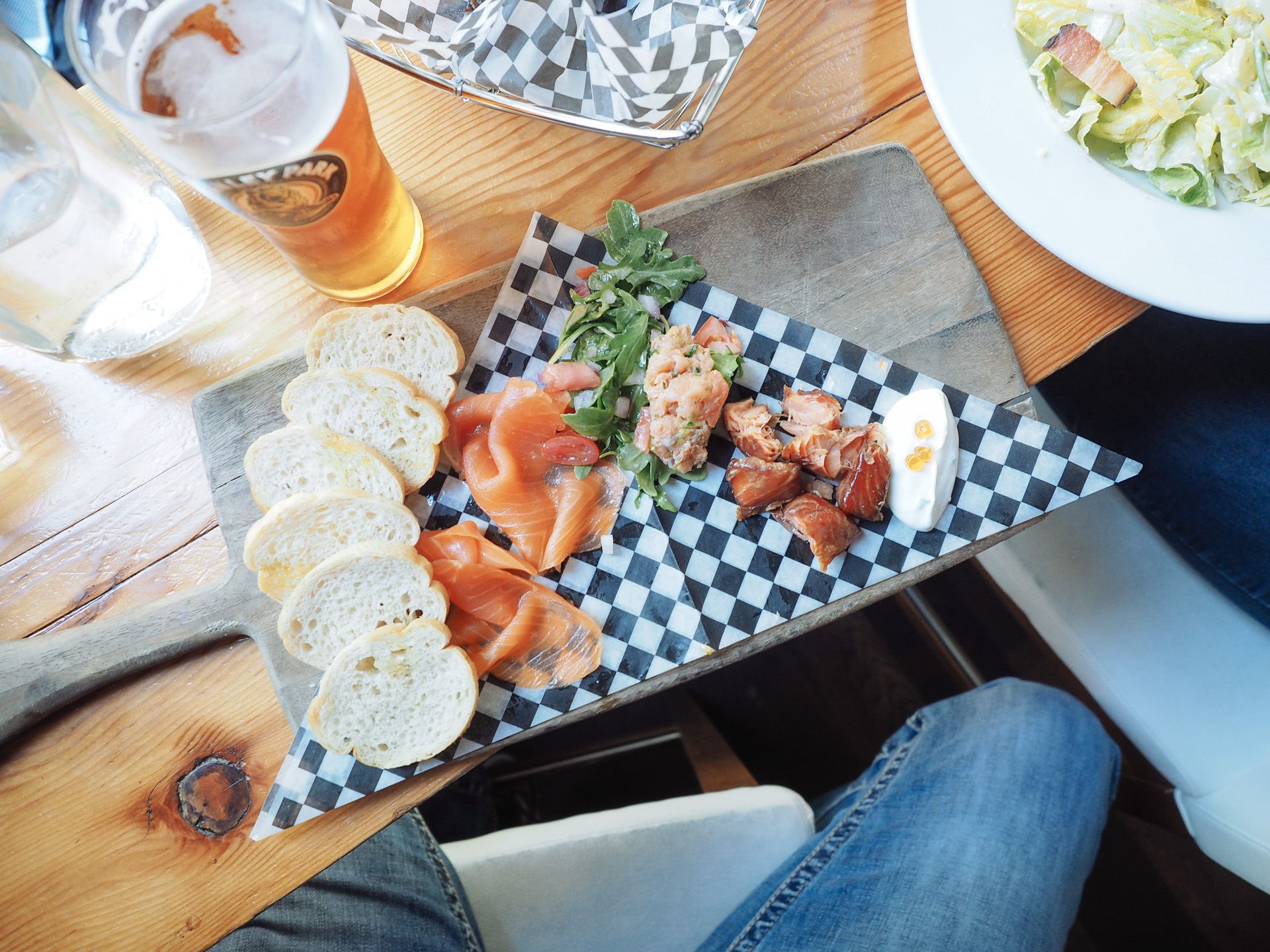 In all honesty, I thought the smoked salmon was raw (naive, I know) and it took some gulping to get it down. After I realized the nature of the smoked salmon, it became one of my favourites on this plate. Mostly though, candied salmon blew away the rest of the options.

After our late lunch at The Flying Pig, Jac and I jumped aboard a Richmond-headed Canada Line train to return to our hotel to meet the other two and pick up our bags. From there, we hit the train again to YVR Airport before jumping on a plane back to Winnipeg.

Of course, as I often complain about here, arriving in Winnipeg on the Sunday of May Long Weekend was the least of our pleasures. We deboarded the airplane in shorts and tee-shirts, only to be blasted with a mid-May snowstorm that made our normal hour-and-a-half ride home into a three-hour ride home. The snow-slash-sleet combined with heavy winds made for ice pellets which ripped out any amount of happiness I felt only three hours prior.

But in all reality, our trip was fantastic and opened our eyes to an entirely new train of thought: relocation. Never before had Jaclyn and I considered the idea of relocating to an entirely different area to start our careers and our family. Every travel opportunity we had had prior to Vancouver had an international destination, meaning any dream of relocation was quickly shattered by having to acquire work visas or green cards. The simplicity of moving within Canada, however, painted the allure of Vancouver evermore permanently in our heads.

The Greater-Vancouver area is true to its “Canadian Riviera” physique. The streets are clean and free of those putrid sewer and garbage smells you wiff in New York City or Paris.

The weather is fabulous — the waitress at The Flying Pig said she had seen two short blips of snowfall in the last five years.

Job opportunities are both plentiful and substantially higher paying than the same jobs in Manitoba. And, from an accountant’s point-of-view, Jaclyn and I would pay upwards of $10,000/year in less income tax if we moved and started our careers in British Columbia. We may need that extra $10,000 per year in order to combat Vancouver’s highly expensive standard of living, but I’d like to take that challenge head on.

Oh, and there are no mosquitoes.2

The entire trip made us question why we choose to live where we do. And although there are still a few factors holding us back from moving right now, I’m interested to see how opportunities unfold over the next year or two. If one thing leads to another, maybe Jaclyn and I will call Vancouver home.

In the meantime, we’ll look back on our May Long Weekend in Vancouver as a picturesque, temperate, and truly enjoyable experience.