This may very well be the most unique review I’ve ever written. It’s not every day hockey and memo books are discussed in the same review. 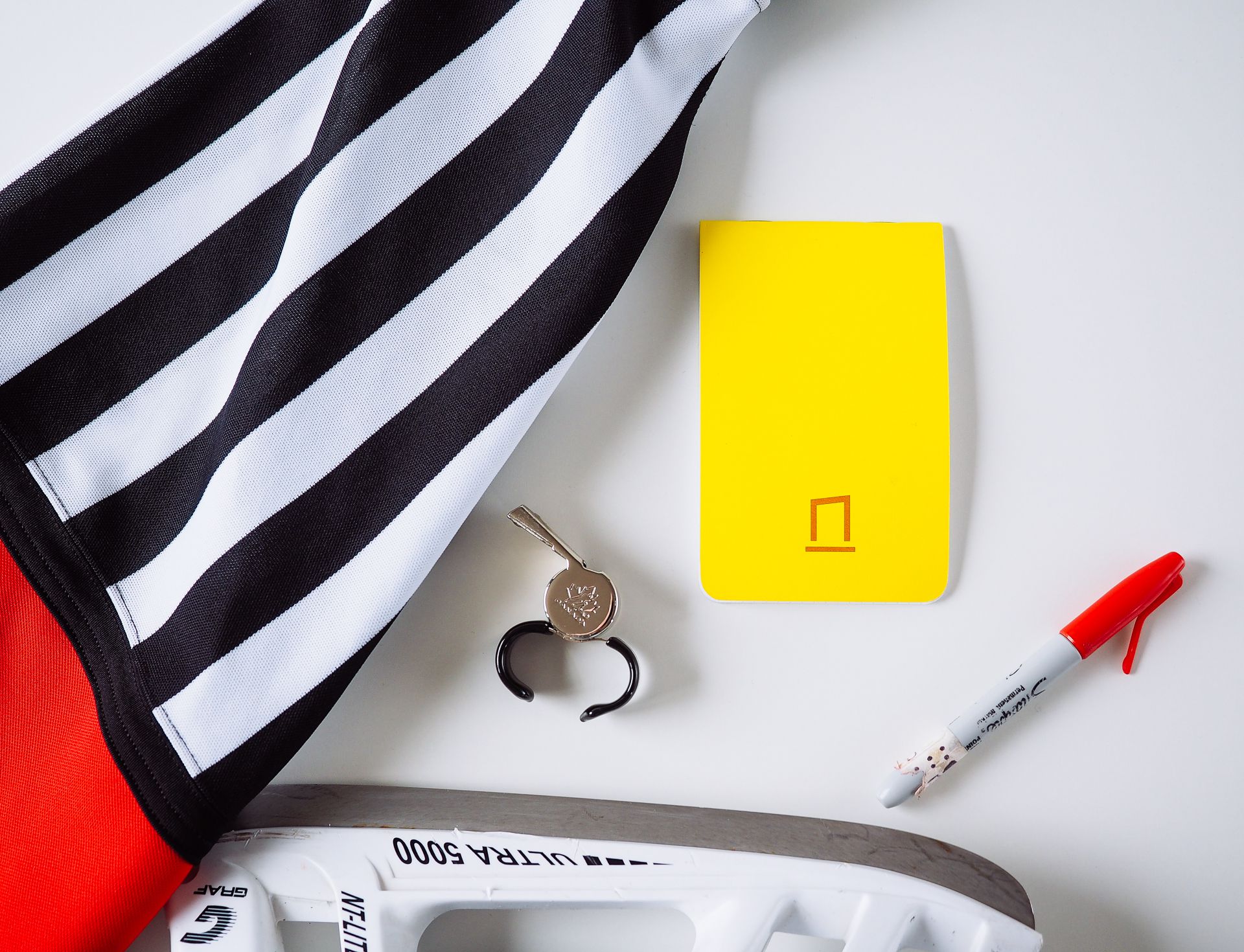 I’ve written on The Newsprint for well over a year now and I have yet to delve into the topic in which I am most experienced. My day job and writing experience pale in comparison to my experience on the ice as a hockey referee. 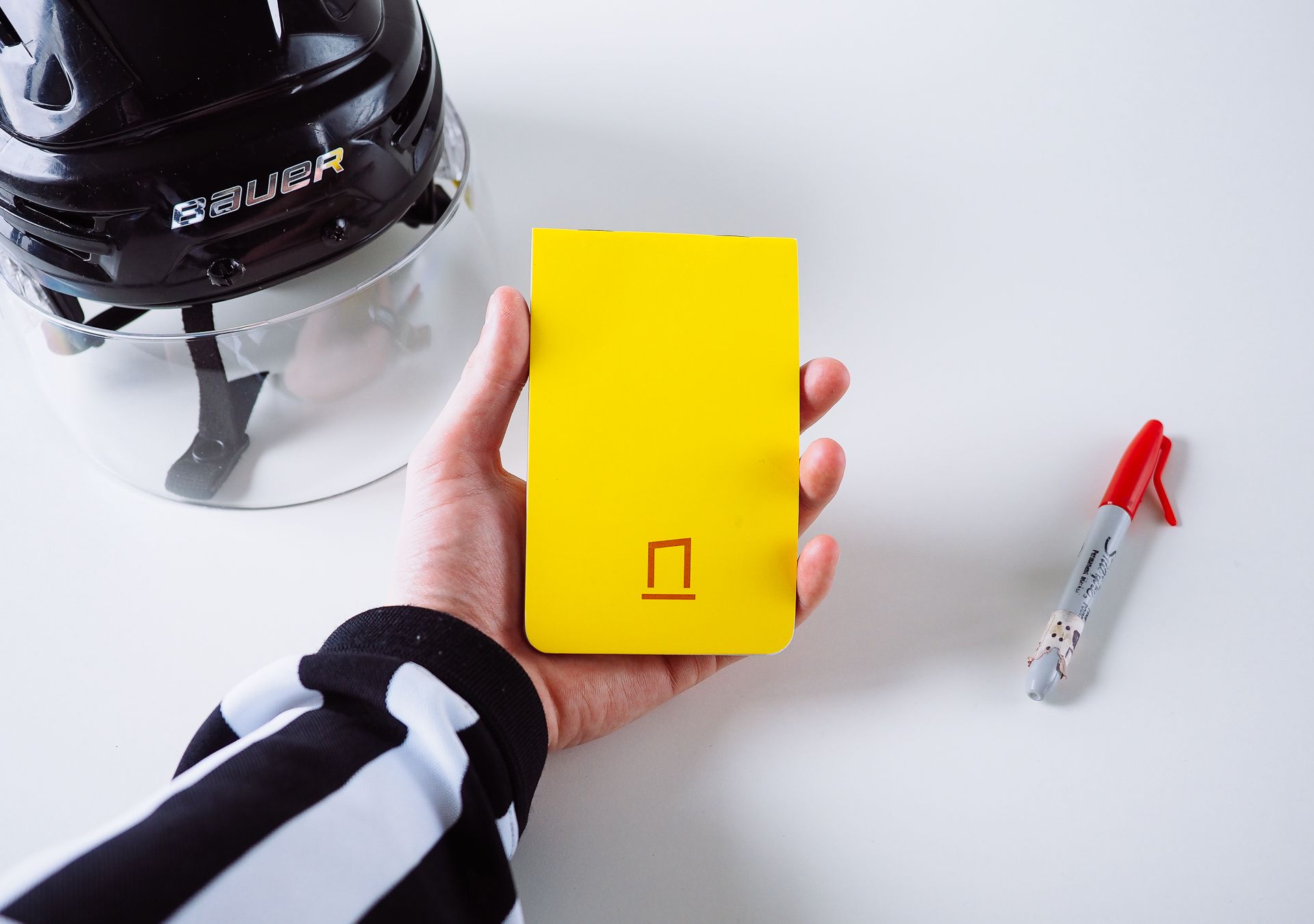 I became a hockey referee when I was 13 years old. At the time, my dad insisted I try it out to earn some cash and to help learn a different side of the game. Little did we know it would be the job that would pay for my university degree and a professional education afterwards.

I am a Level V Hockey Canada official, which demands a 90% passing grade on an essay-like rulebook test. It also demands physical testing statistics be maintained and improved upon year over year. And, luckily for me, it means I have the chance to work the highest levels of hockey in the province.1

Hockey refereeing has to be one of the least forgiving jobs on the planet. I have seen all kinds — players spitting at timekeepers, players biting other players, and coaches threatening to beat kids up in the parking lot after a game. I’ve also seen some amazing things, like small teams representing their community on the national stage and young men turning into respectful, hard-working adults. 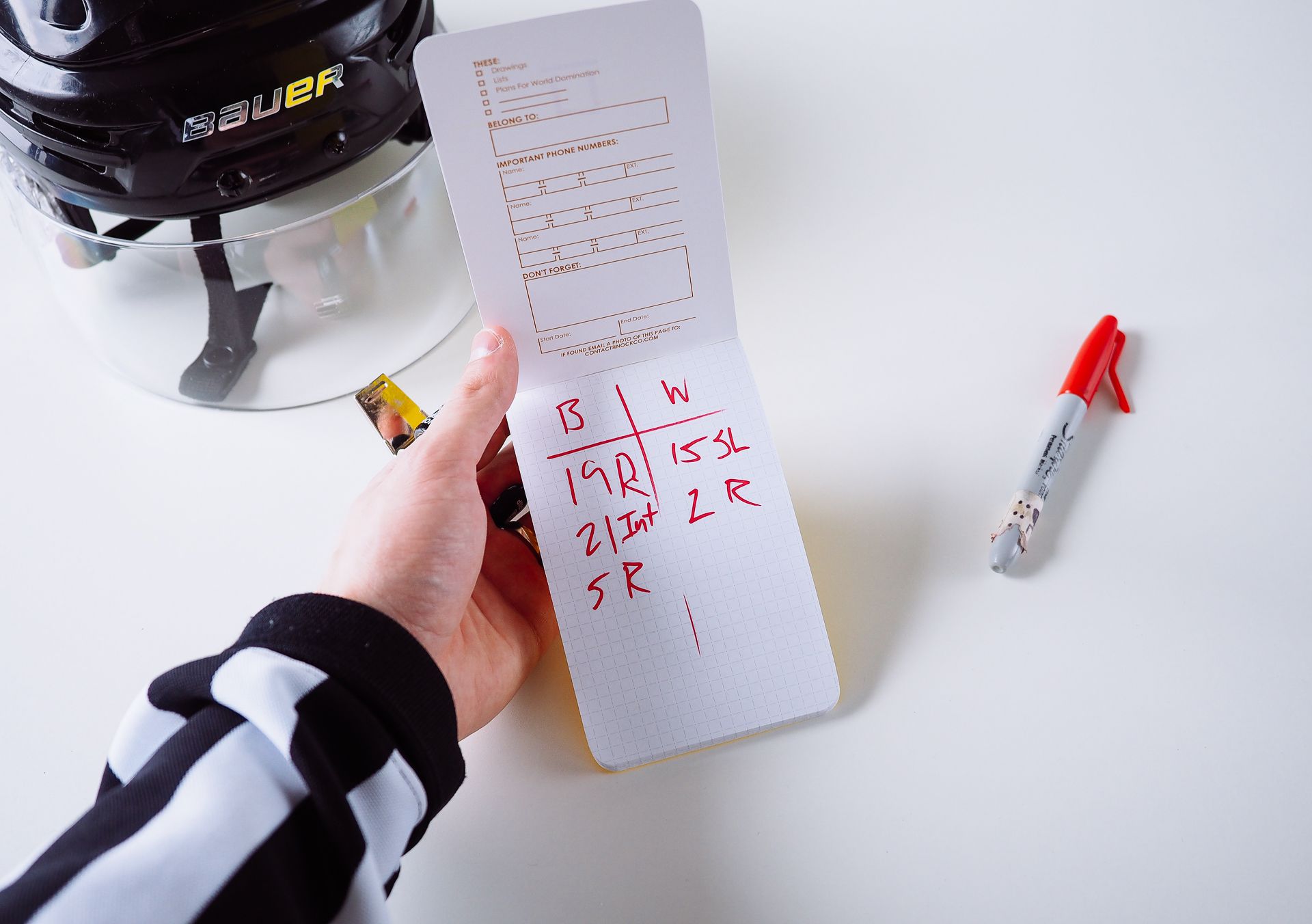 Unfortunately, the terror stories are the ones that stick in your head. For those instances where the game goes south, every referee carries a “riot pad” in their pocket alongside a writing utensil. Generally, this riot pad is little more than a top-bound notebook alongside a Sharpie. But, for those aware of their tools, not just any riot pad will do.

I have searched for a proper riot pad for quite some time. Ideally, the riot pad would be top-bound with the option for a leather cover so as to avoid inevitable deterioration in a front pocket. It would also have good enough paper so I could write on both sides of each page. And lastly, the paper would need to handle a Sharpie marker.

Why a Sharpie? I work in rinks of all shapes, sizes, and temperatures, and it’s essential to use a writing utensil that doesn’t freeze. Sharpies are the ideal candidate for the job.

For a long time, I’ve used a side-bound Moleskine memo book as a riot pad. I couldn’t find a proper reporter style, top-bound notebook that suited my needs.

So, finally, after 10 years of hockey refereeing, I found a proper top-bound notebook. The Nock Co. DotDash pocket notebook is the best notebook I have found to be my riot pad on the ice. 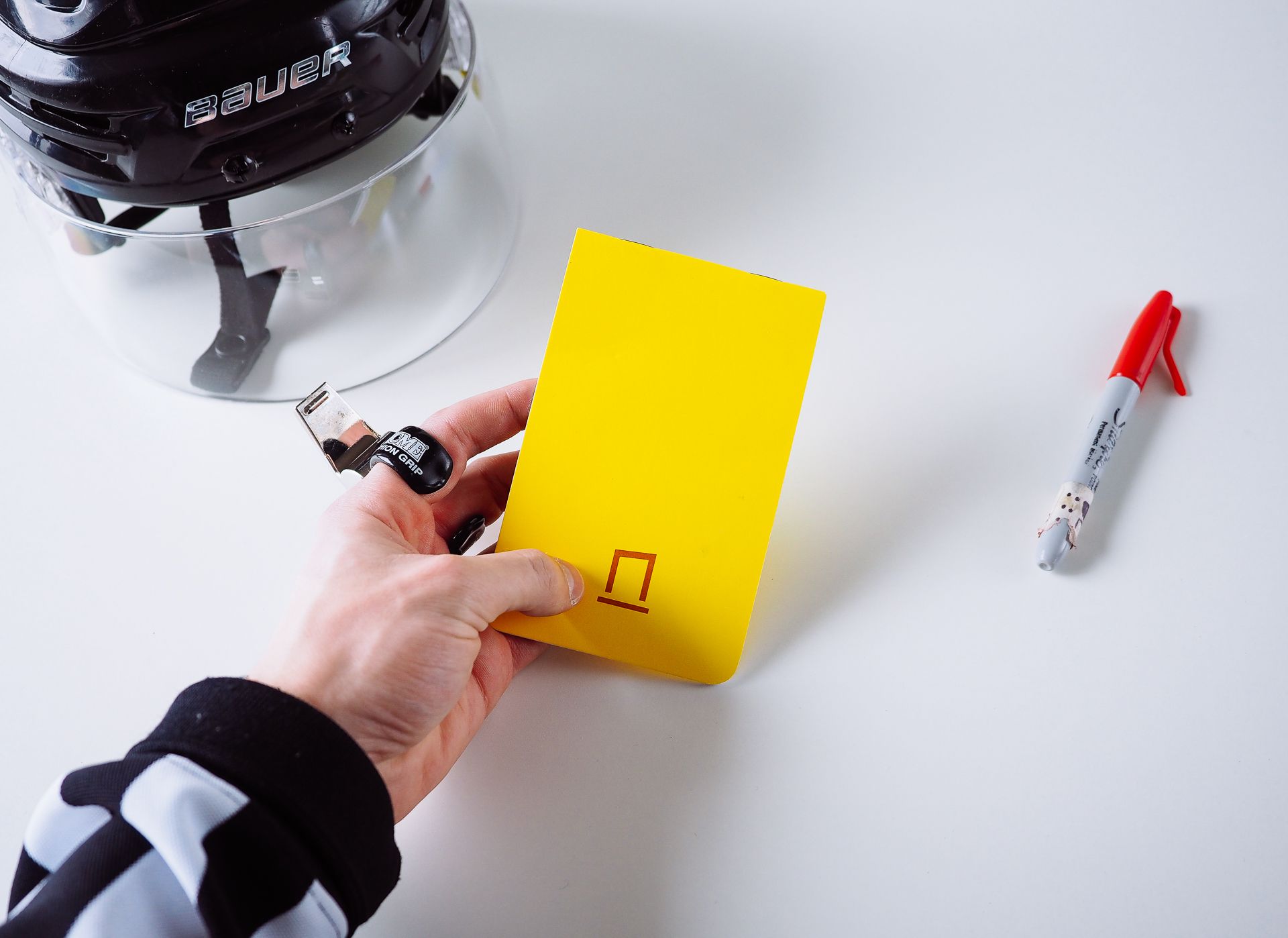 Right off the bat, the DotDash’s covers ideally meet my riot pad requirements. The 80 lb. covers have a matte feel to them and resemble the matte feeling of Field Notes Brand’s Drink Local edition.

The matte covers are flexible and contour nicely to my front pocket. My book has naturally bent after many games this year, but I expected the wearing of the book to be worse by now.

The 3.5” by 5.5” dimensions are a little on the big side for carrying in my referee pants, but the book’s flexibility allows it to be carried without being noticed. 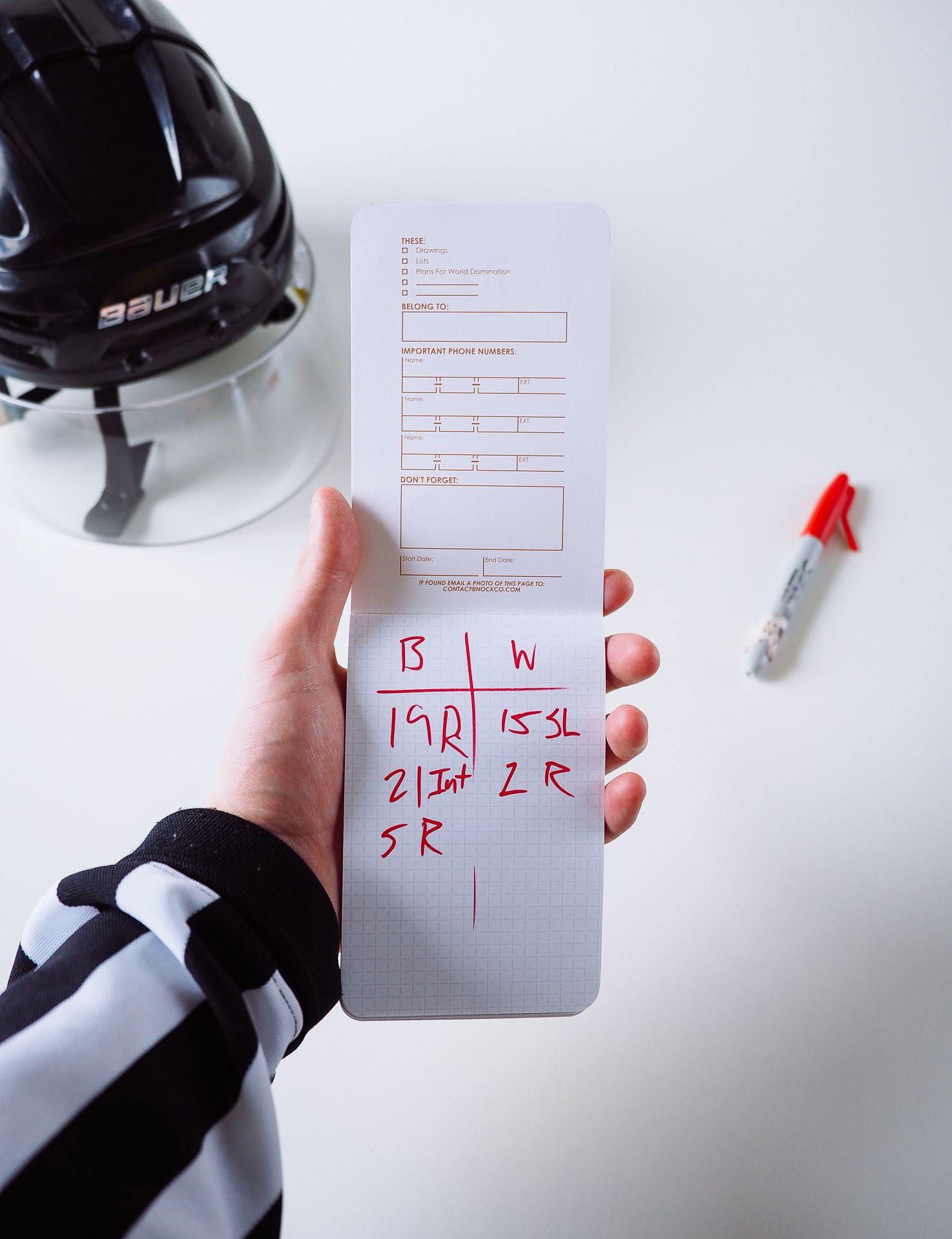 The size of the book has worked to my advantage when I’ve had to pull out the book during a game. Large pages allow for plenty of writing room and I am thankful for the extra space. Generally, notes are jotted down very quickly2 and legibility goes by the way side. Having extra space helps the legibility camp a bit.3

The inside front cover, like a Field Notes, has a documentation template ready to be filled in. Unfortunately, neither of three check boxes suited my particular situation and I wasn’t ready to write “Riot Pad” with a blunt Sharpie on the inside cover. I chose to keep the page nice and clean instead. 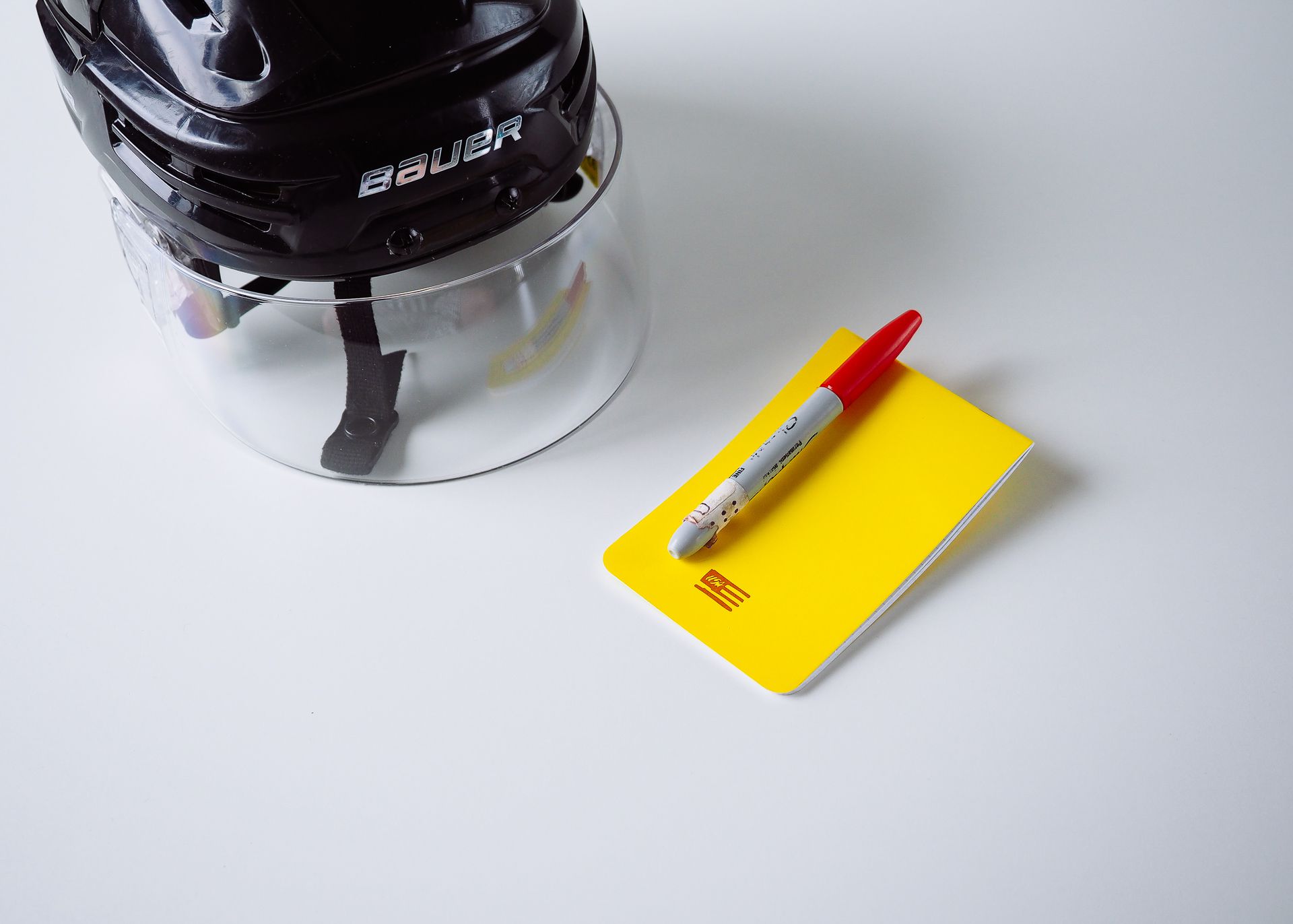 The back cover has a minimal amount of branding. Nock Co. is known for their American-sourced and American-made goods, and the little amount of branding that is present is purely American. I admire a patriotic touch like this, although I wish I could find some Canadian companies doing the same thing.

The striking yellow has caught some attention while on the ice, and rightfully so — this DotDash yellow is in your face and very loud. We officials are highly recommended to maintain a neutral appearance on the ice; black helmets, pure white laces, black skates, and white tape (if necessary) are required to be worn at all times. Pulling a bright yellow notebook out of my pocket doesn’t break any specific rule, but it can definitely throw someone for a loop the first time they see it. I would love to find a DotDash leather cover to hide this colour when on the ice, but I love the colour away from the rink. 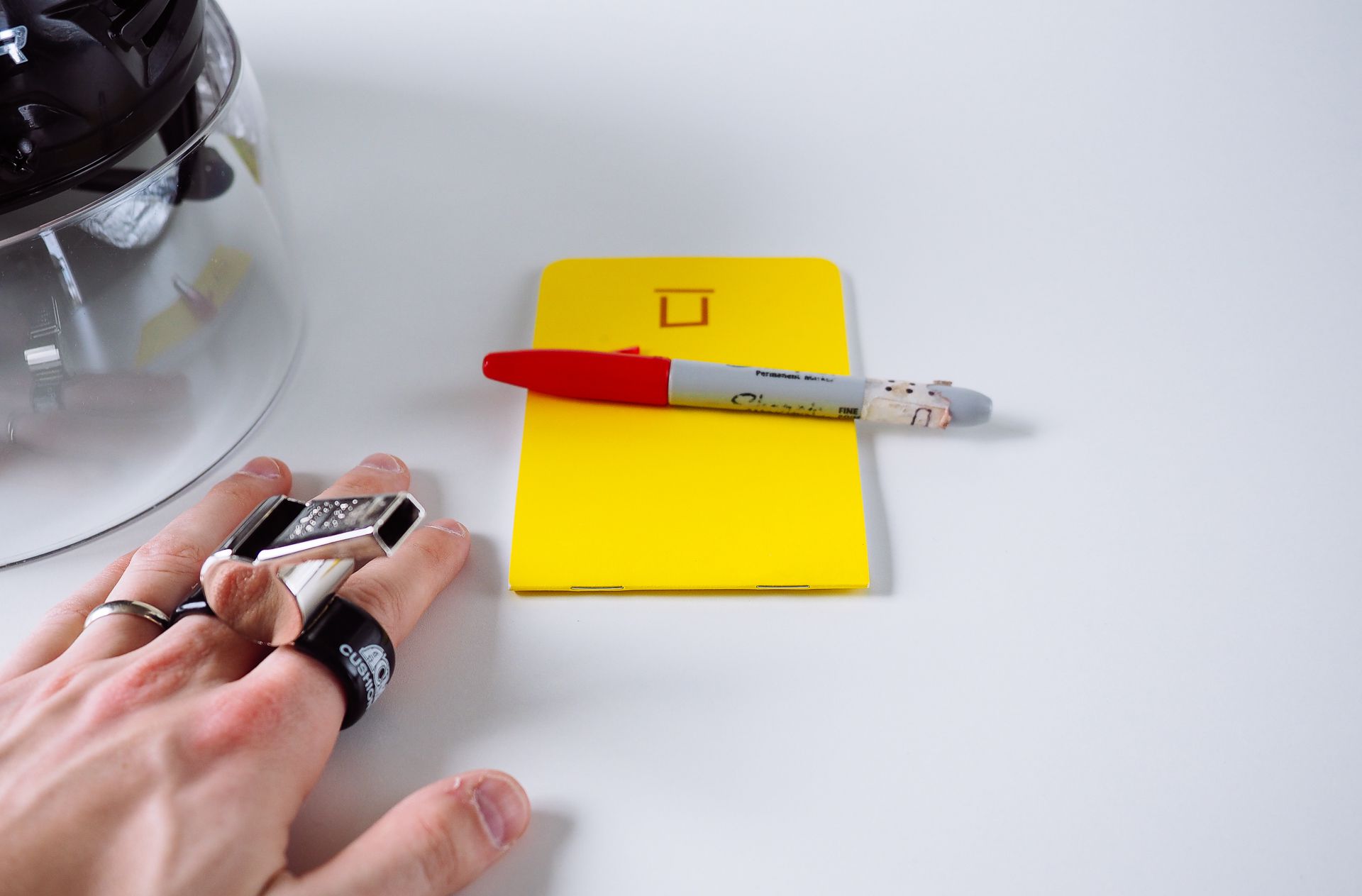 As mentioned earlier, the DotDash notebook is a top-bound notebook with two staples instead of the general three-staple binding found in other popular memo books. I really like this trait. The top-binding allows for a unique utility and brings Nock Co.’s notebook out of the crowd. Usually for me, any memo book that remotely resembles a Field Notes is immediately written off. Nock Co.’s DotDash notebook is made for a slightly different use and I’m excited to have a little variety in my tool kit. 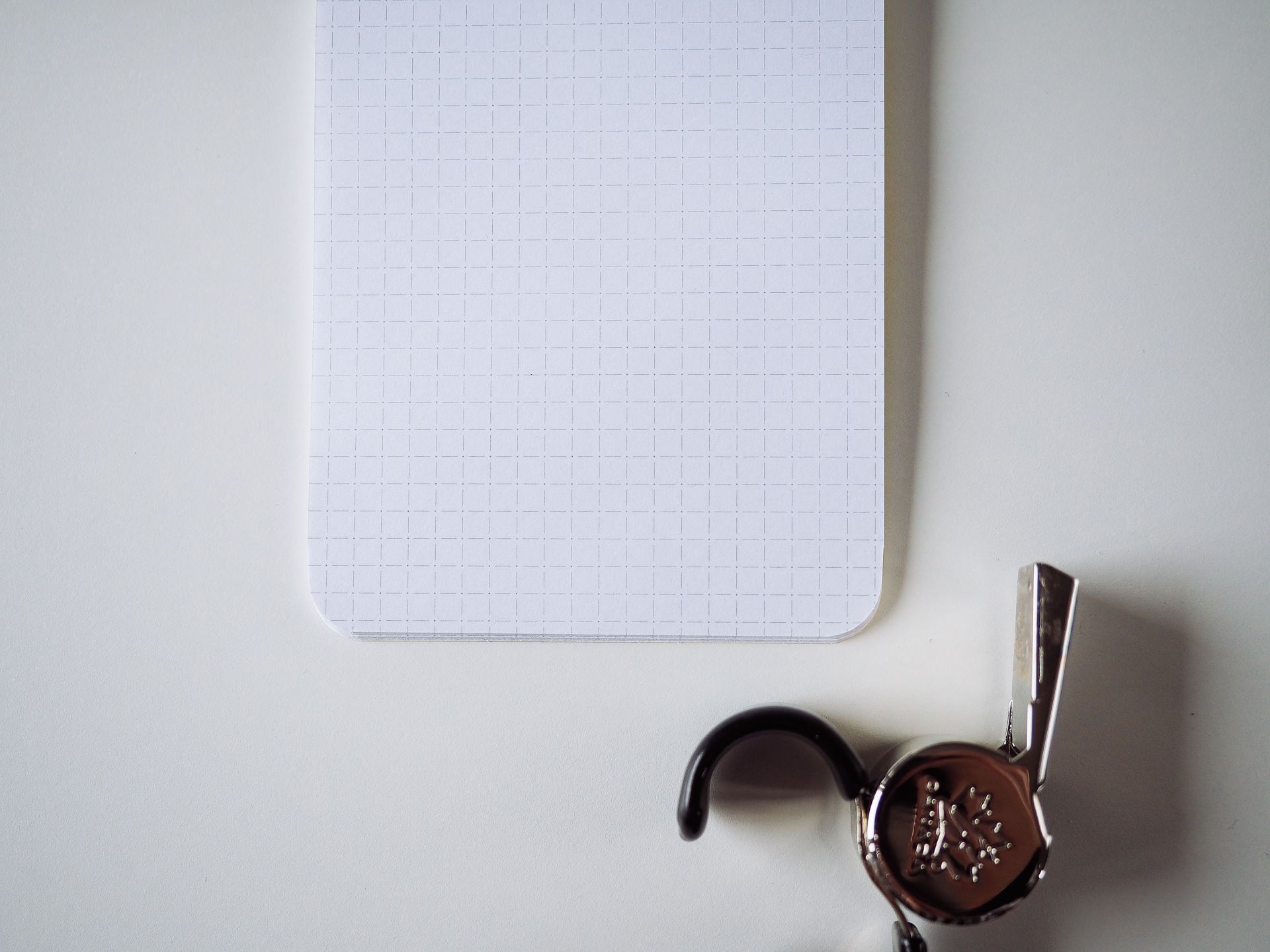 The inside paper is very standard for memo books of this size and price. Like Field Notes, the paper is a 50 lb. paper which absorbs pens, pencils, and markers exactly how you’ve come to expect.

The DotDash name comes from the unique grid printed on each page. Each grid square has a dash and the intersections between dashes are marked with a dot. Full grids can be extremely distracting and dot grids often get out of the way too much. This DotDash grid is one of a kind and is my favourite grid pattern to date. The hazy blue colouring of the dot dash grid is a classy touch as well. 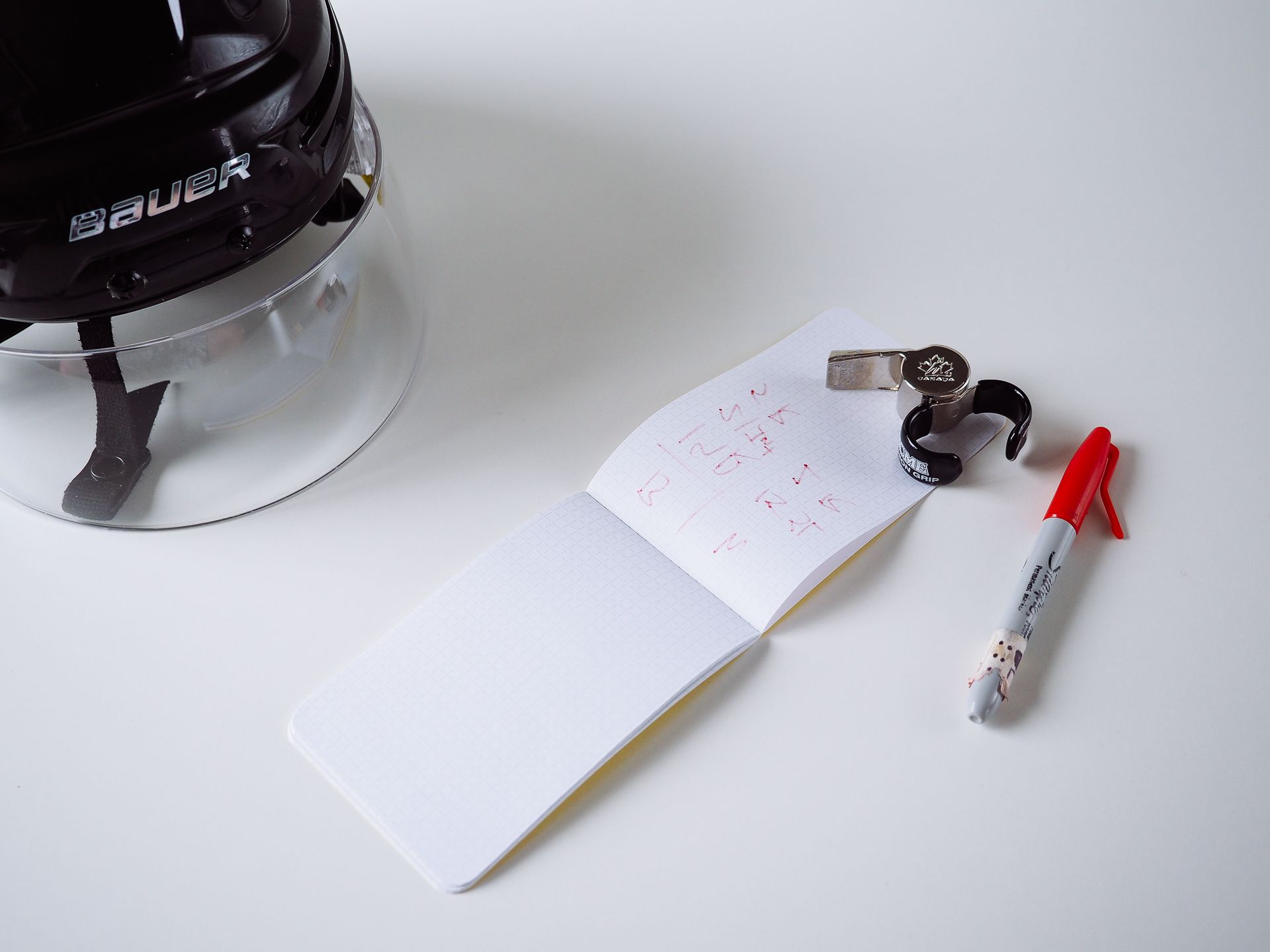 Like all 50 lb. papers, fountain pens and ballpoints act quite normally on the DotDash’s paper. I have used my books exclusively with Sharpies however, and I’ve found a fair amount of show-through and bleed-through on the opposite side of the page. It’s a rare season where I go through an entire notebook, so I’m not too worried about only using one side of the page. However, if you have a different use case than I do and use Sharpies on both sides of the page, be prepared to deal with a fair amount of show-through and bleed-through. 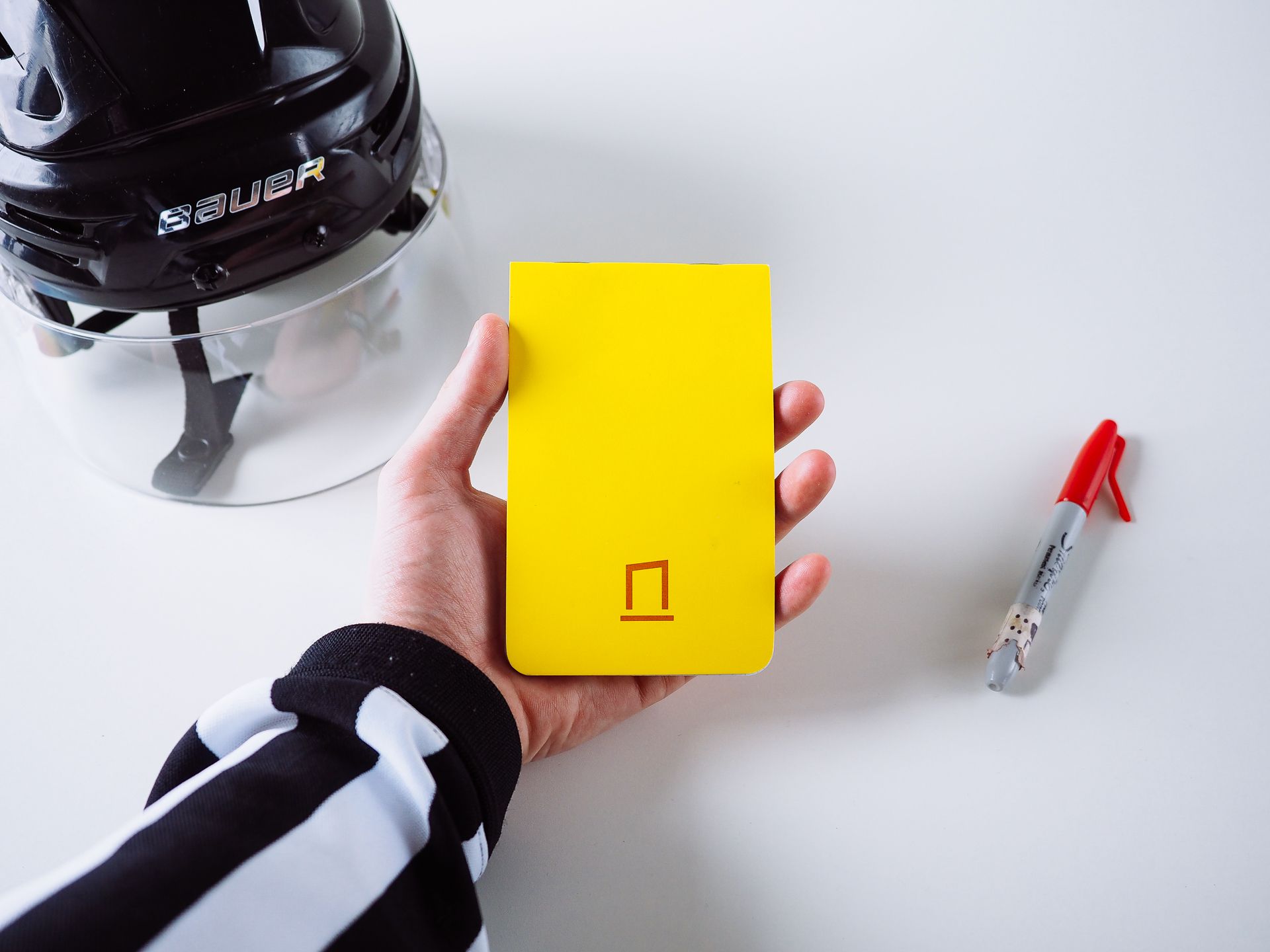 I’ve written a lot about memo books in the past, but never have I put one to the ultimate riot pad test. The Nock Co. DotDash notebook is the first notebook to reside in my referee pant’s front pocket and very well may be the last.

The DotDash’s matte finish and top-binding allow for it to be a perfect writing pad for nasty situations on the ice. The 3.5” by 5.5” dimensions are a bit odd for a reporter style notebook like this, but I like the way it feels in the hand and how much room there is to write on each page.

Unfortunately, I use a Sharpie when on the ice due to colder temperatures, so show-through has become something I work around when on the ice. For the few times I have to pull out this writing pad during a game, writing on only one side of the paper really isn’t a big deal.

Despite the DotDash’s flexible ability to contour nicely to my pocket, I’d love for a leather case to protect my notebook and to hide the bright yellow cover. I think the Nock Co. yellow brings so much character to the table, but it brings too much character to the ice as a hockey referee. If someone took advantage of my million dollar idea and created a nice leather cover to protect my new DotDash notebooks, I’d be ready and prepared for anything the game of hockey could throw my way.

Overall though, this notebook is a pure winner. Whatever your use case, I’m sure the top-bound DotDash notebook will fill a unique roll in your workflow. And better yet, you’d be supporting some fantastic fellows by picking up a pack or two of these books.