A First Look at For All Mankind

I doubt it’ll happen, but I’d love for Apple to bundle an Apple TV+ subscription with the purchase of a new device. I’d be set for life! With the minimal back catalog and a completely brand-new, fresh-faced company producing these shows, the current bundle is a strong bet to get Apple TV+ into as many retinas as possible.

So, I happily obliged yesterday and started my one-year free trial. And being a space odyssey film lover, For All Mankind was the obvious first choice.

My biggest concern about TV+ and Apple’s original shows: forcing it. Apple is not a film or TV production company. They are a hardware company who magically blends in powerful, easy-to-use software to make the ultimate user experience. TV shows could be a branched off extension of this, but it’s not immediately evident.

Another way to say it, Apple doesn’t need to be in the TV show business. They’re choosing to be here, for the sake of (what I’m assuming) are high, service-based margins.

TV+ will work on the low end of this margin scale for the foreseeable future — For All Mankind (and See, in particular) don’t appear to have any corners cut or shortcuts taken. The moon-based shots and space sequences in For All Mankind’s pilot episode are very well done.

Actors aren’t taking any shortcuts either — Eric Ladin’s Gene Kranz feels identical (albeit, substantially shorter in stature) as Ed Harris’s Kranz from Apollo 13 (the one with Tom Hanks; probably my favourite movie fo all-time).1 Colm Feore’s German-American role as Wernher von Braun inside Houston puts him at stark contrast with the rest of the characters around him. These two, alongside Wrenn Schmidt’s Margo, stood out from the rest of the pack. Schmidt’s Margo feels like a character waiting to explode — there’s so much potential in her character that I can’t wait to see unfold over the first season.

Now, about it being “forced”: My biggest concern is that For All Mankind exists for the purpose of existing, rather than a story that needs to be told. Put another way: I’m concerned Apple has created For All Mankind to fill out it’s Apple TV+ launch catalog instead of producing a show to tell a unique, must-tell story.

There are lines in this first episode that highlight this. Certain lines could have been left out of the dialogue, with the audience filling in the blanks. Other bits of dialogue felt forced (particularly the part about the Apollo training crews having to be “pissed off” after losing the race). And the whole “race to the bar” scene felt completely disjointed from the rest of the episode.

Apple is learning, to be sure. There will be growing pains along the way. This first episode is good, not great. This show could become great very easily.

I’m going to watch the remaining For All Mankind episodes, as I think there’s a world of directions Apple could take this show. Episode 1 wasn’t a failure — it’s an intriguing show with good visuals and few visible shortcuts taken.

Lukewarm. That’s the word. I’m lukewarm on the first episode. 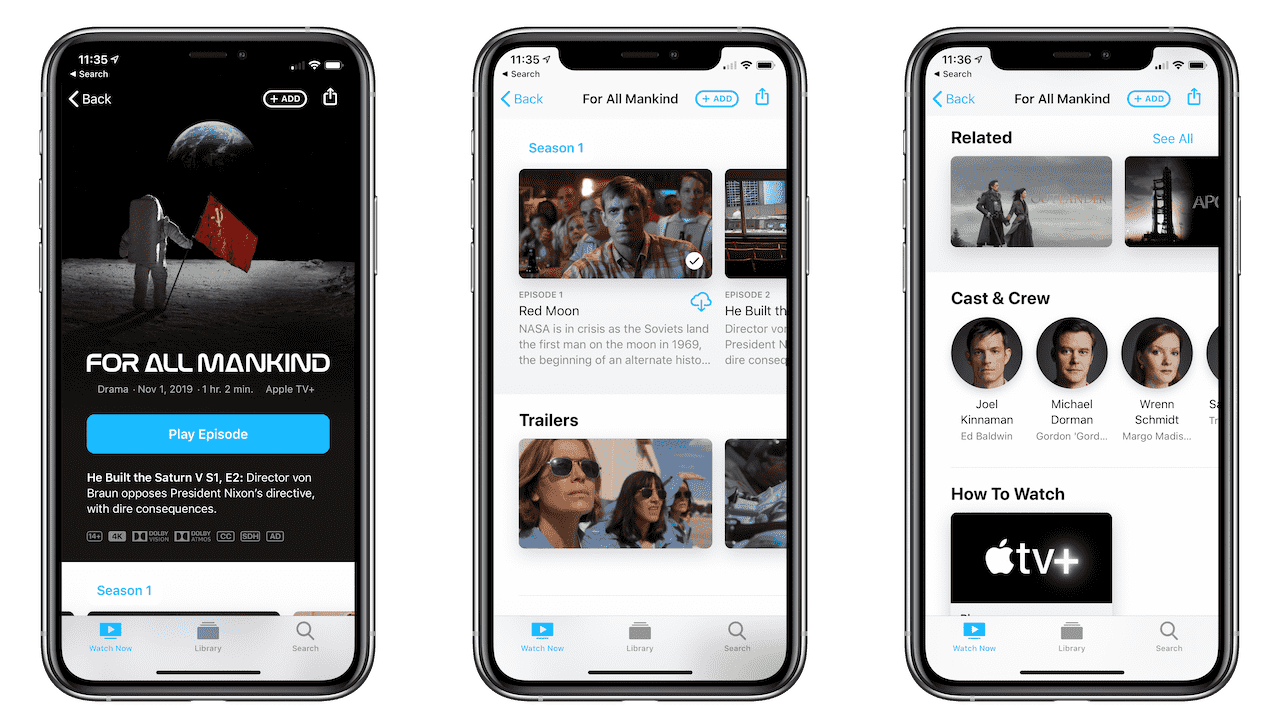 A quick thought about Apple’s TV+ app experience: I love the visuals, big blue action buttons, and simplistic trailer/cast/related sections. The design of these landing pages is fantastic and they quickly invite you into the show.

Plus, For All Mankind’s title font is the best title font I’ve seen in years.

Update: Jaclyn and I watched the first episode of The Morning Show last night, and I’d give it a higher rating than For All Mankind. Aniston and Witherspoon’s initial chemistry was brilliant.

As for the initial ratings — I imagine this is another case of the disconnect between critics and general audiences. There’s a reason the “Best Picture” winners each year are relative no-namers. I wonder if The Morning Show suffered as a result.