I think I’ve said it before, but I love reading and dissecting home screen articles. It’s fun to over-analyze every intricate detail about apps and where to store them on your iPhone and iPad (like thumb length and proximity to your thumb’s reach diameter), and it’s just fun to discover how others use their devices. 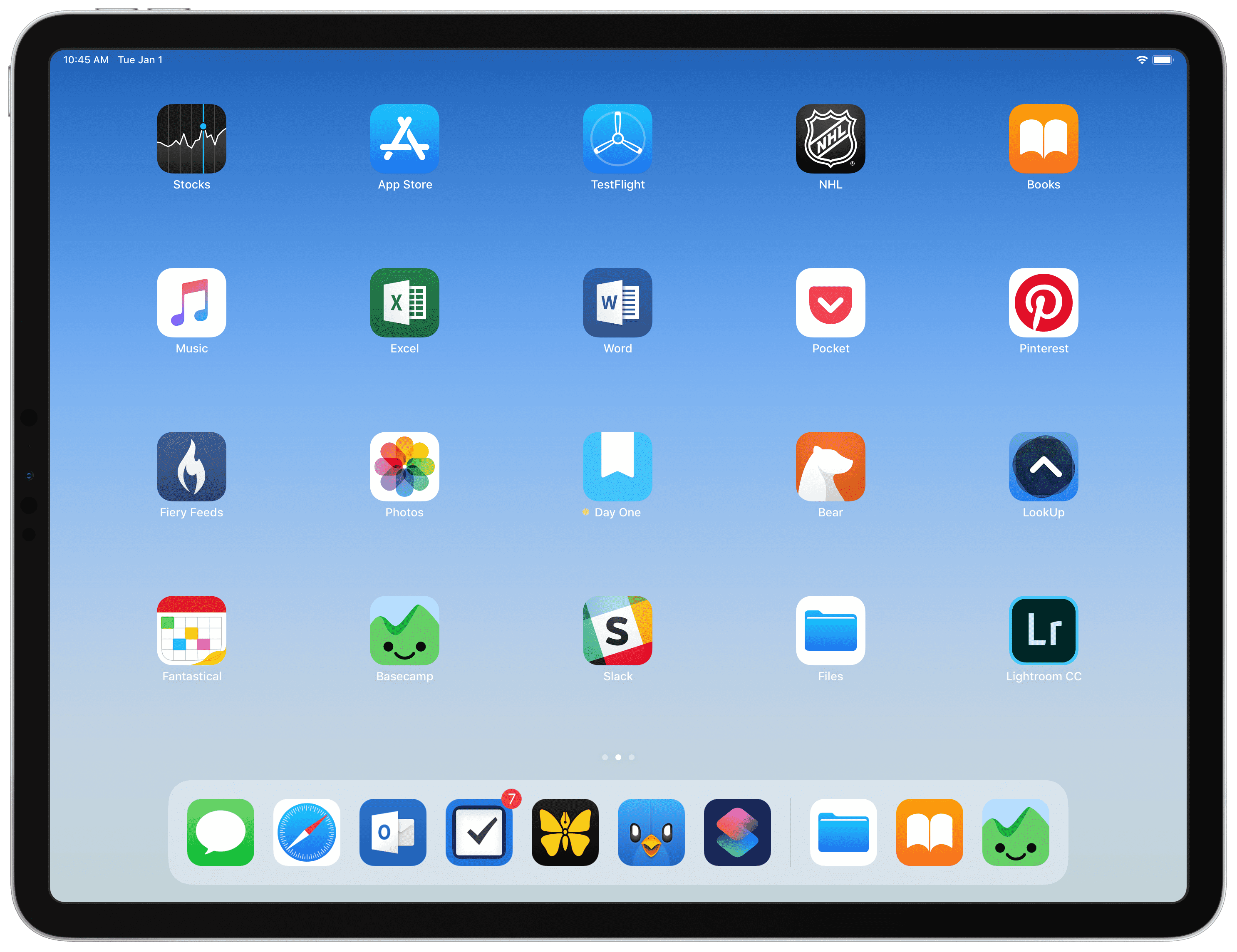 Is the new iPad Pro my main computer? Maybe. I’m not exactly sure. I’d have to measure down to the minute to determine which screen I’m staring at the most during the day. It’s certainly used more often than my iPhone, but probably doesn’t surpass how much I use a Windows PC at the office during the day. I use the iPad to write when I get tired of looking at the external display in my home office; I use the iPad to browse the internet, message, email, and read my Pocket queue while on the couch or at the kitchen table; and I use the iPad as my all-around communication device when I’m at the office-office.

I’m officially tired of this perpetual measurement of how much I use each device and whether my device “kit” is practical, rational, and fully utilized. Rather than worry whether I’m using my iPad enough, I think it’s smarter to focus on the actual thing I want to do.

That’s my rant about whether the iPad Pro has replaced my main computer. I guess it has. Maybe it hasn’t. Who cares?

Here’s a look at the apps I have on my home screen, which seems to change less and less as I discover apps that meet my needs perfectly.

And for the dock:

Shortcuts has changed how I work on the iPad and is the main reason for supplanting many tasks I formerly completed exclusively on the Mac. I have been able to move a daily Sweet Setup task of updating our deals page over to the iPad with a string of five different workflows, and I have a range of shortcuts I use to capture blog posts for The Newsprint, alter URL paths when copied from Transmit, and so on. 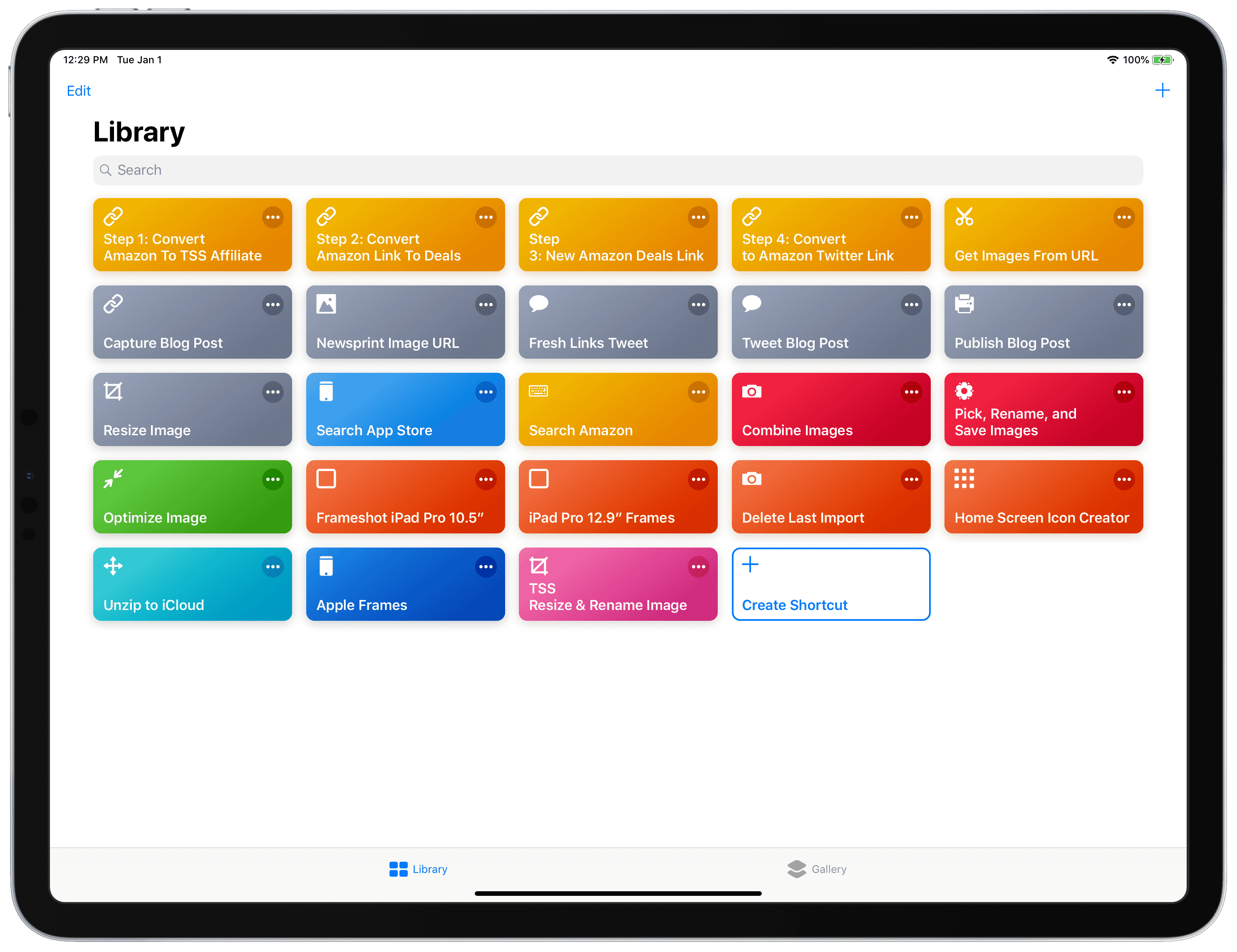 Putting these screenshots into device frames is also way easier using Shortcuts thanks to Federico Viticci’s handy shortcut. I used to complete this task tediously using Sketch or Photoshop. Now, what used to take 30 minutes now takes less than 15 seconds. The future!

I created two simple searching shortcuts for the App Store and Amazon. It takes the search query, finds the app on the App Store or the product on Amazon, and copies a URL with an affiliate tag to my clipboard. The Amazon search shortcut utilizes an app called Associate to do this. Both work well and meet my specific needs.

Lastly, the pink shortcut at the end of the list is used for uploading imagery to The Sweet Setup’s Wordpress CMS. Jeffrey Abbott created this for his own use and shared it with me, and I’ve evolved my edition of the shortcut over time. This shortcut takes an image (which I drag and drop into Shortcuts for memory purposes), resizes the image, uploads the image with a specific URL, copies the URL to the clipboard, and prepends the copied clipboard to a specific draft in Drafts 5. If I have multiple images, Shortcuts completes this process in a big loop, meaning I have very few button presses to upload and generate all the URLs needed for large image sets on The Sweet Setup. The amount of time Jeff’s shortcut has saved me is probably days at this point.

As I said, apps are added and taken away from the home screen on a weekly basis, and I find myself creating quick shortcuts too often for productivity’s sake. Nevertheless, the iPad is an increasingly useful device in my day-to-day work. If Adobe can bring batch copying and pasting to the iPad, that’ll be another straw that breaks my Mac’s back.