A Day at the Petasos Beach Resort & Spa in Mykonos, Greece

Researching and putting together our 17 day trip consisted of perusing endless websites, travel reviews, and recommendation lists. Putting Cinque Terre aside, four of our first five stops were big touristy destinations. Nailing down an itinerary that covered a wide range of points of interest was more difficult than we’d have liked. 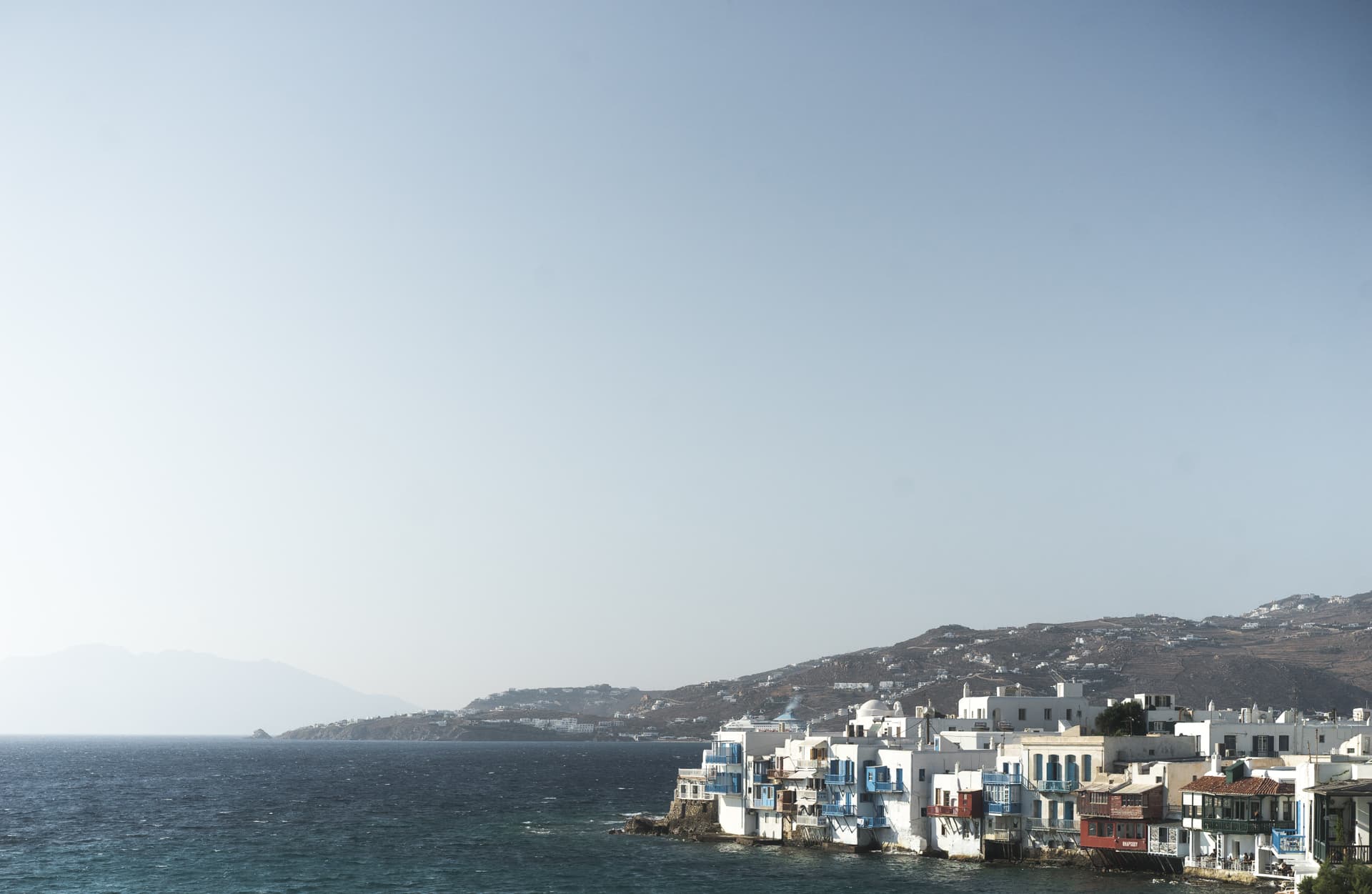 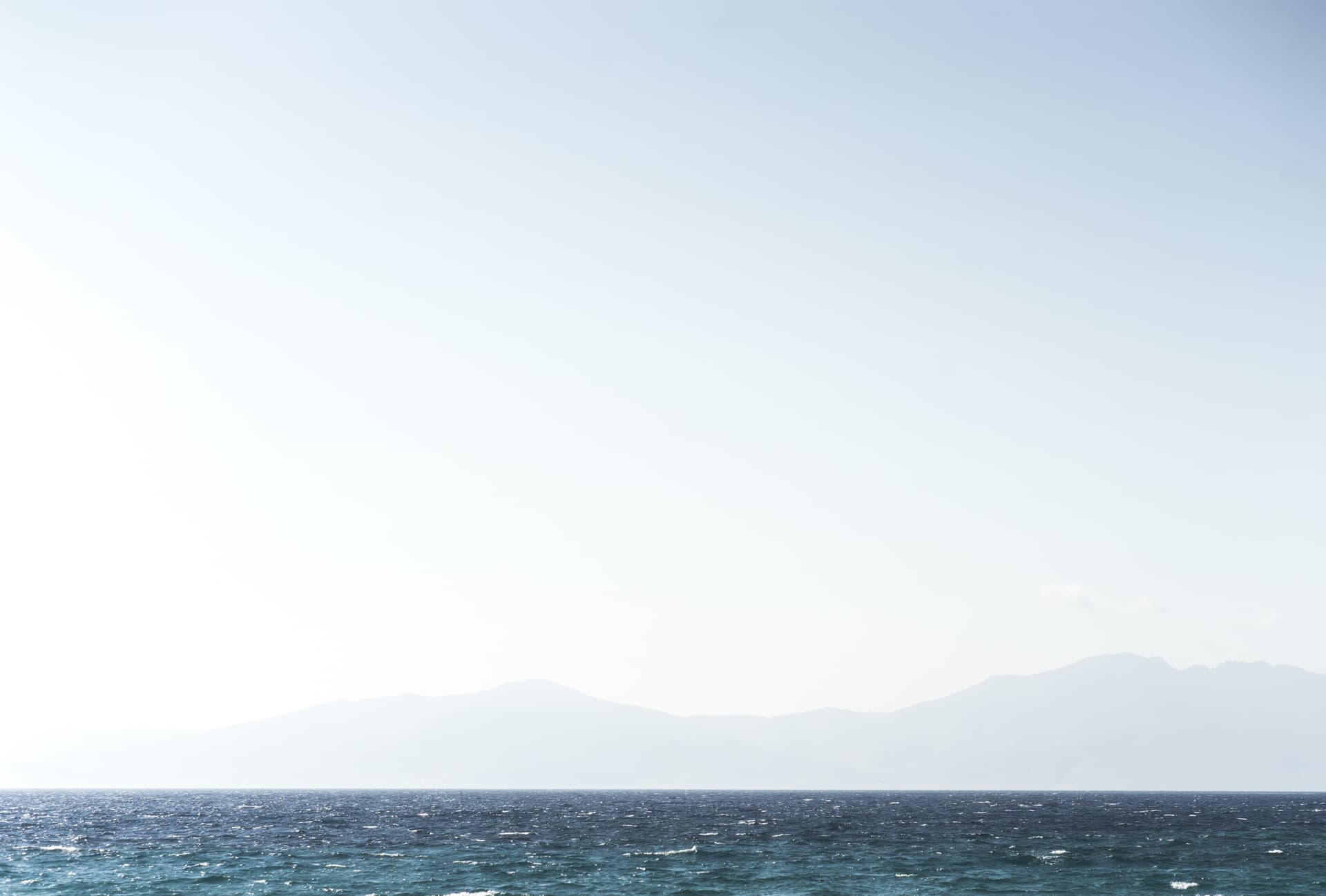 Mykonos and Santorini, in the same fashion, are tourist destinations first, and cities second. Both islands have been built by tourists, for tourists, and have some of the most expensive hotels and restaurants to be found anywhere in the world. The amount of travel information on the web is, expectedly, infinite.

This said, the only website we needed for Myconian hotel research was Santorini Dave’s list of luxury hotels. Santorini Dave covers more than just Santorini and Mykonos, and his lists of high end hotels are thorough and spot on.

We used David’s list of the 15 Best Hotels on Mykonos as our starting to point to gauge prices and accommodations on the island. His list is spot-on, with the highest-end, best-reviewed hotels ranking right near the top. Although pricy, David’s list served us well. 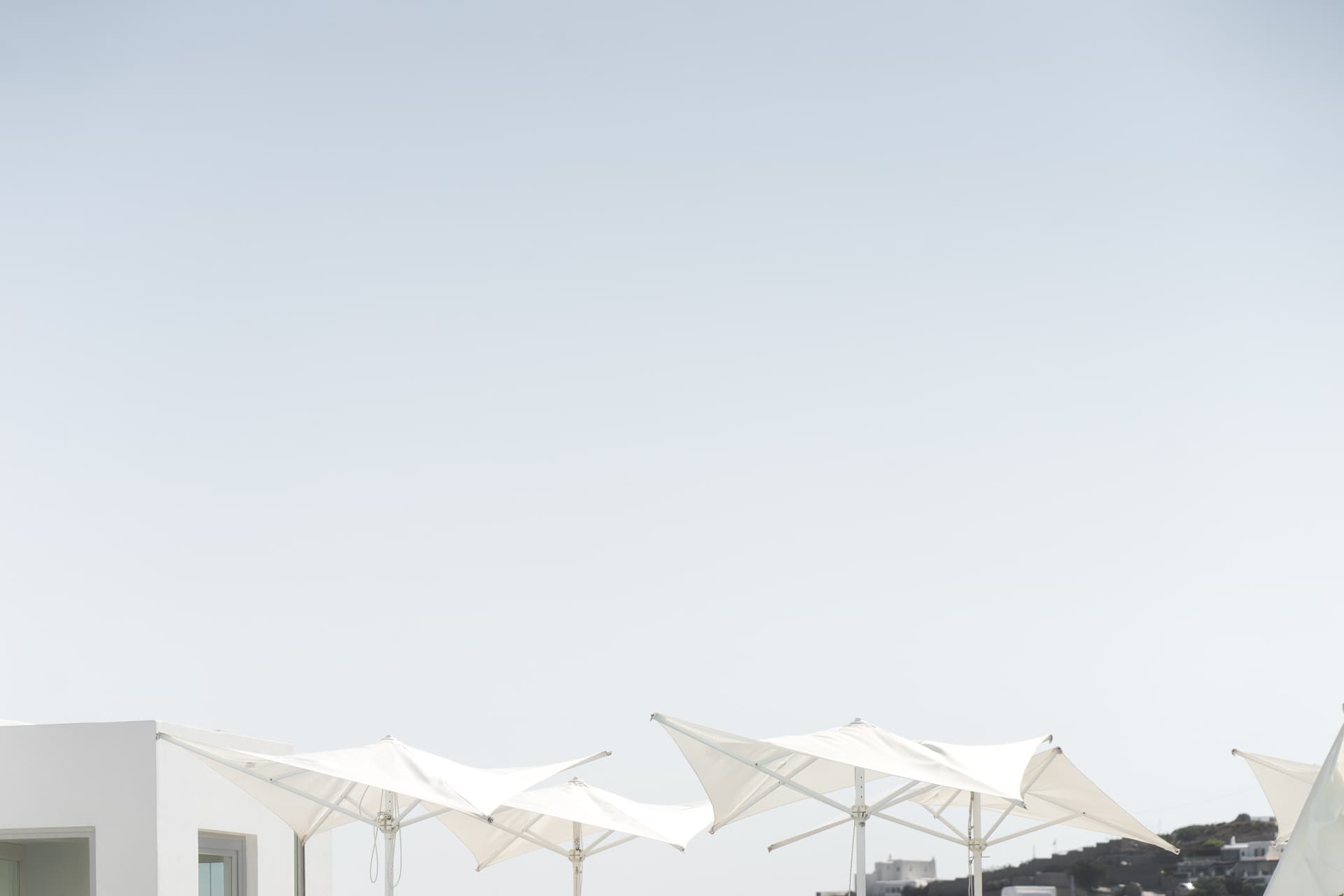 At the bottom of the list was a little easter egg which came with its own share of bias:

Full disclosure: this is where I’m staying this summer with my wife and kids. Great hotel a 1-minute walk to Platys Gialos beach and many restaurants and tavernas. Bus to Mykonos Town stops just outside the front door. Very nice pool and large sundeck look out over the water. Beautiful! 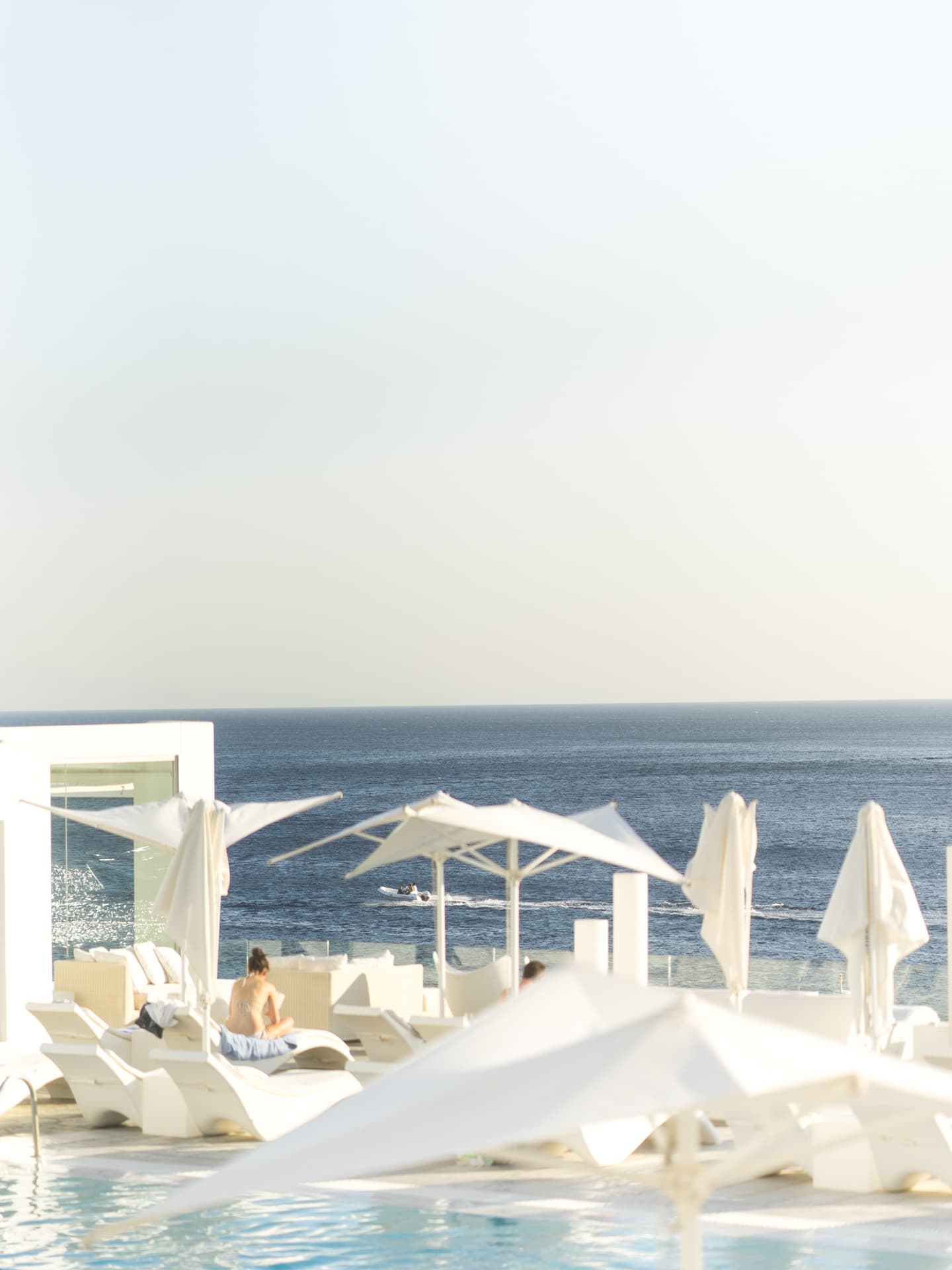 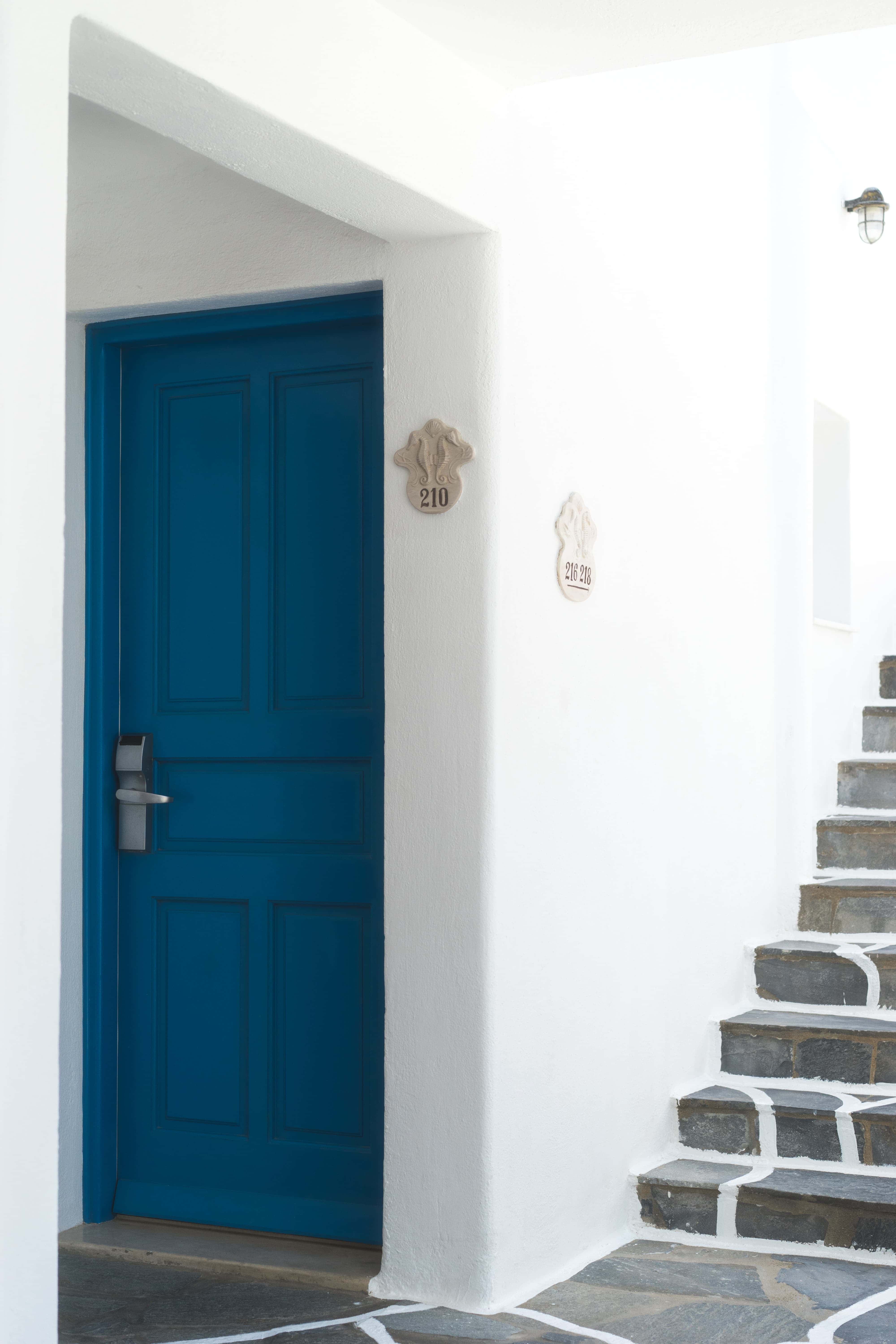 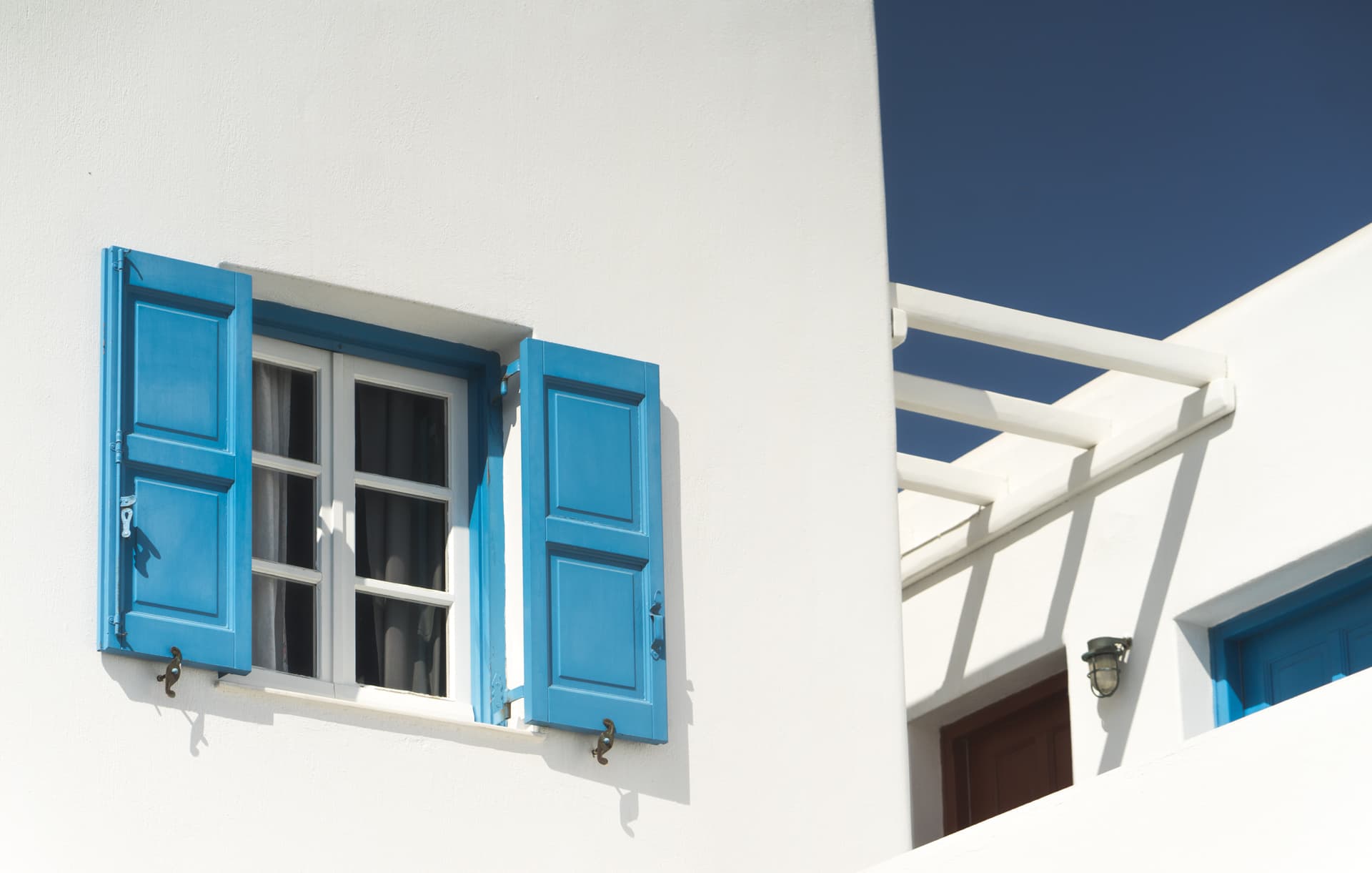 Petasos Beach Hotel & Spa is the last hotel on Santorini Dave’s list, but the photos (and the inexpensive price, in relation to the others on the list) really caught our attention. We doubled down a little on price and ponied up for what we expected to be a little two-day-vacation within a vacation. A flight delay and a missed connection meant we only stayed at Petasos for a single day, but it turned out to be the best day of our 17-day Europe trip, bar none.

Petasos Beach Hotel & Spa is located in Platys Gialos, about a 10 to 15 minute drive from the airport. From the moment we booked with Petasos, we were in touch with the hotel to ensure all details were covered. Petasos sent an 8-seat Mercedes bus to pick us up from the airport, and although we arrived before check-in, the hotel had us for an exquisite continental breakfast unlike anything we ever imagined. We grabbed a table sitting above the water and ate pancakes, eggs, fruit, Greek yogurt (of course), and drank Greek coffee while the lovely Cycladic breeze blew in our faces.

Our flight delay and missed connection took a lot out of us, so after breakfast, we checked into our room, showered, napped for 30 minutes, and proceeded to spend the majority of the hot day at the Petasos poolside. 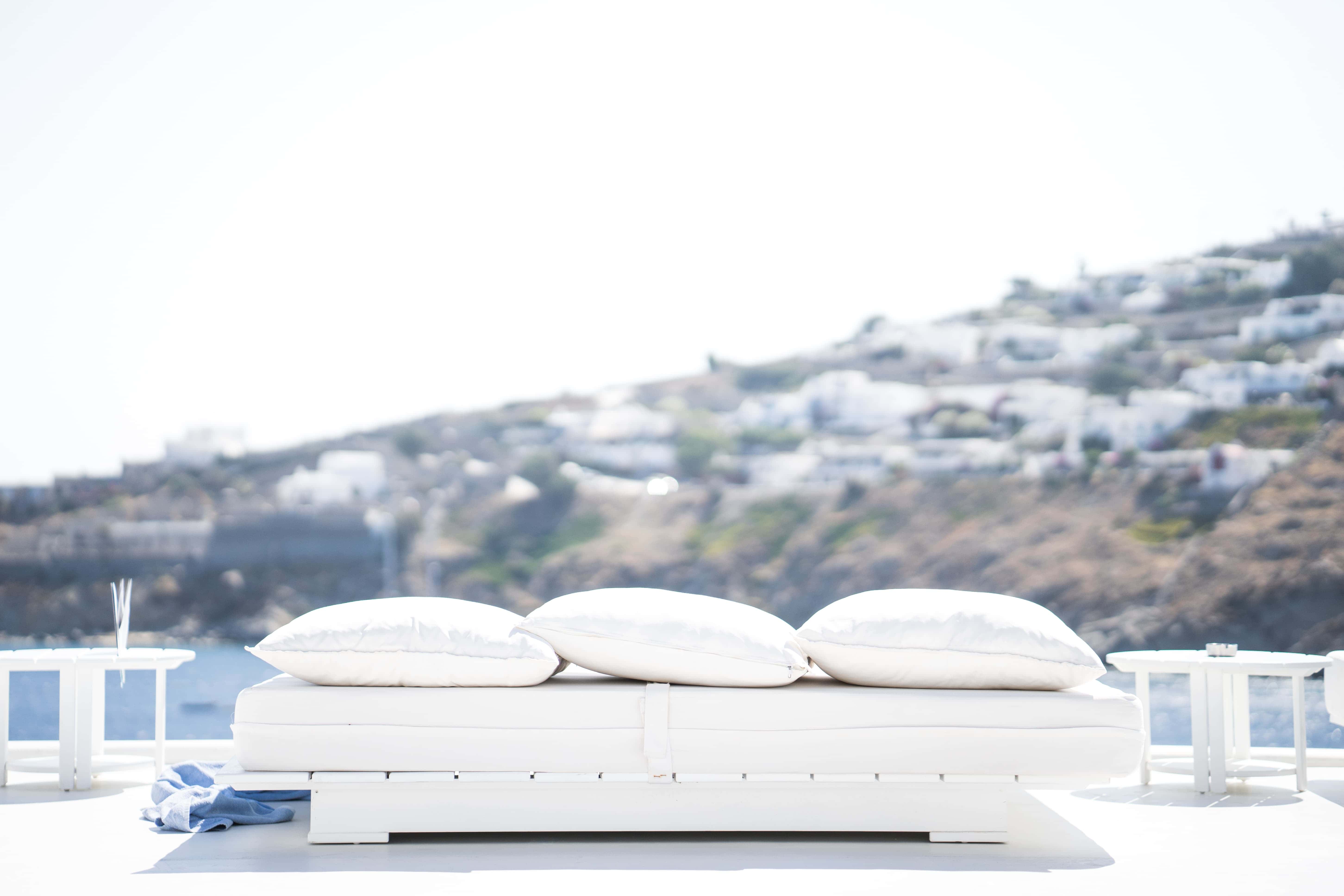 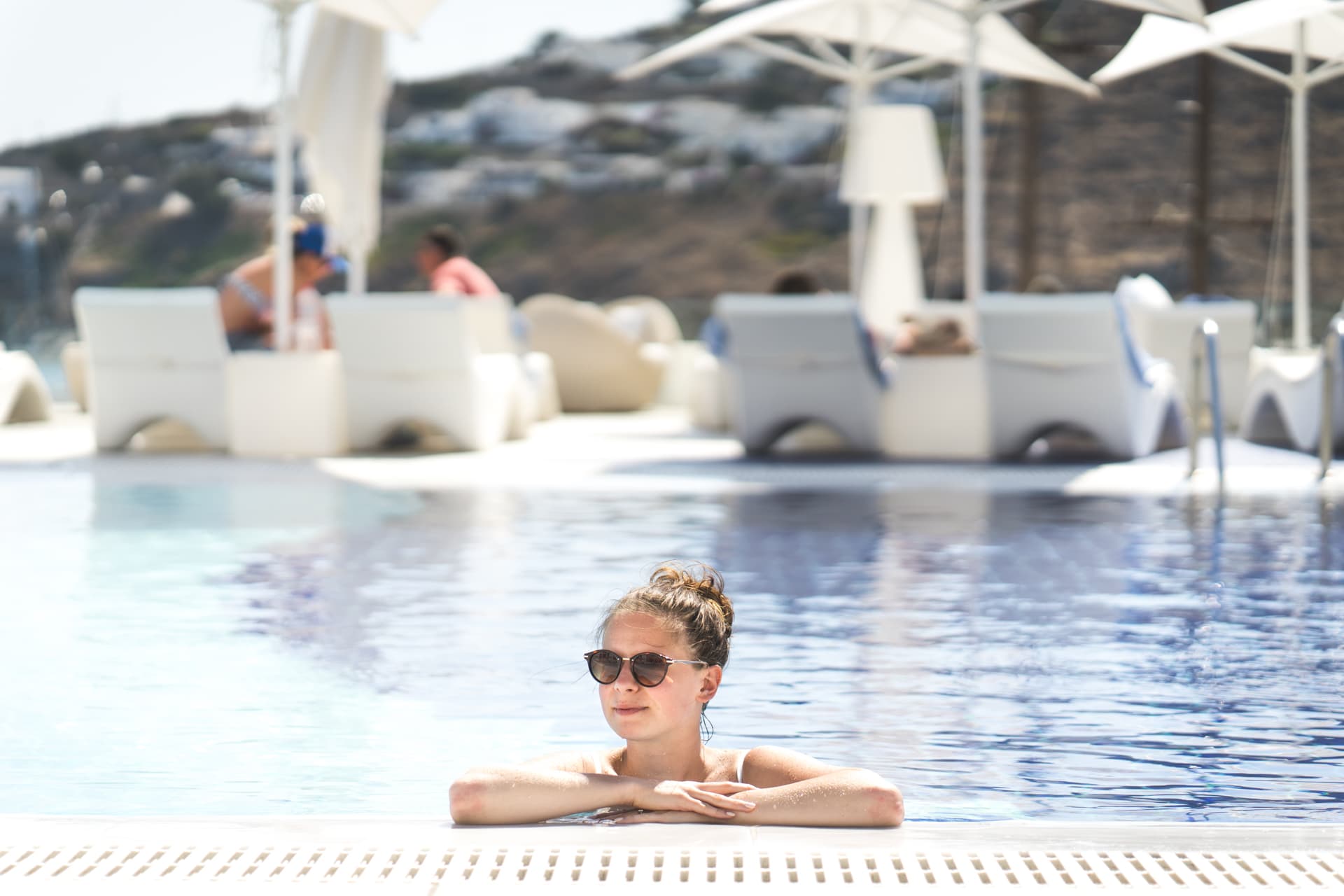 The pool and deck are simply stunning. The deck overlooks the beach at Platys Gialos, with many sunbathing beds surrounding the salt-water pool. On both ends of the deck are restaurants; one for lunch and afternoon beverages at the pool, and the second for the incredible continental breakfast and fine dining experience in the later evening.

Hidden behind the VIP Restaurant was Petasos’ very own private beach. All the sand was groomed perfectly, with more beach beds to be had in the blazing Greek sun, and a lovely swimming area built into the Mediterranean rocks. 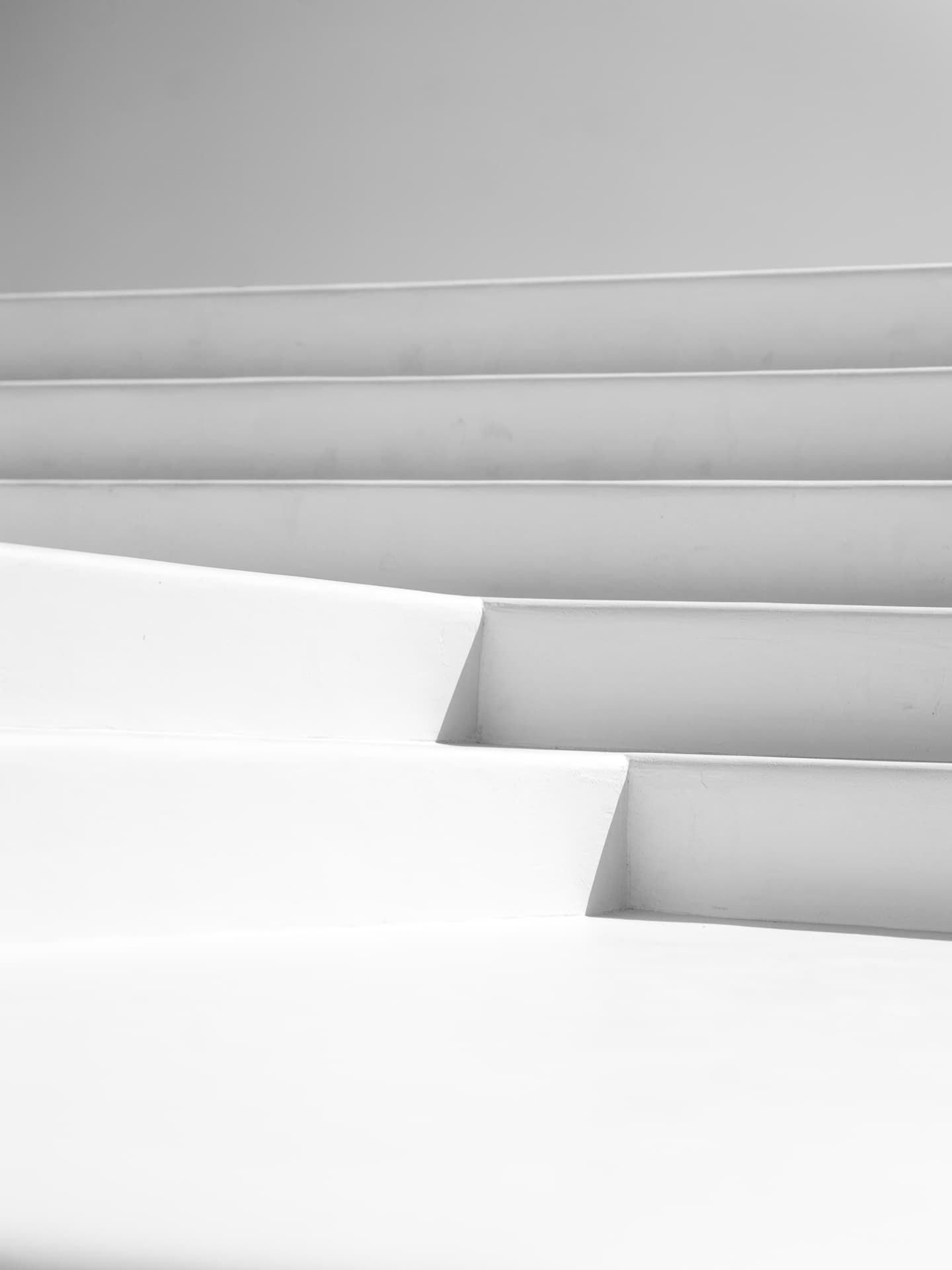 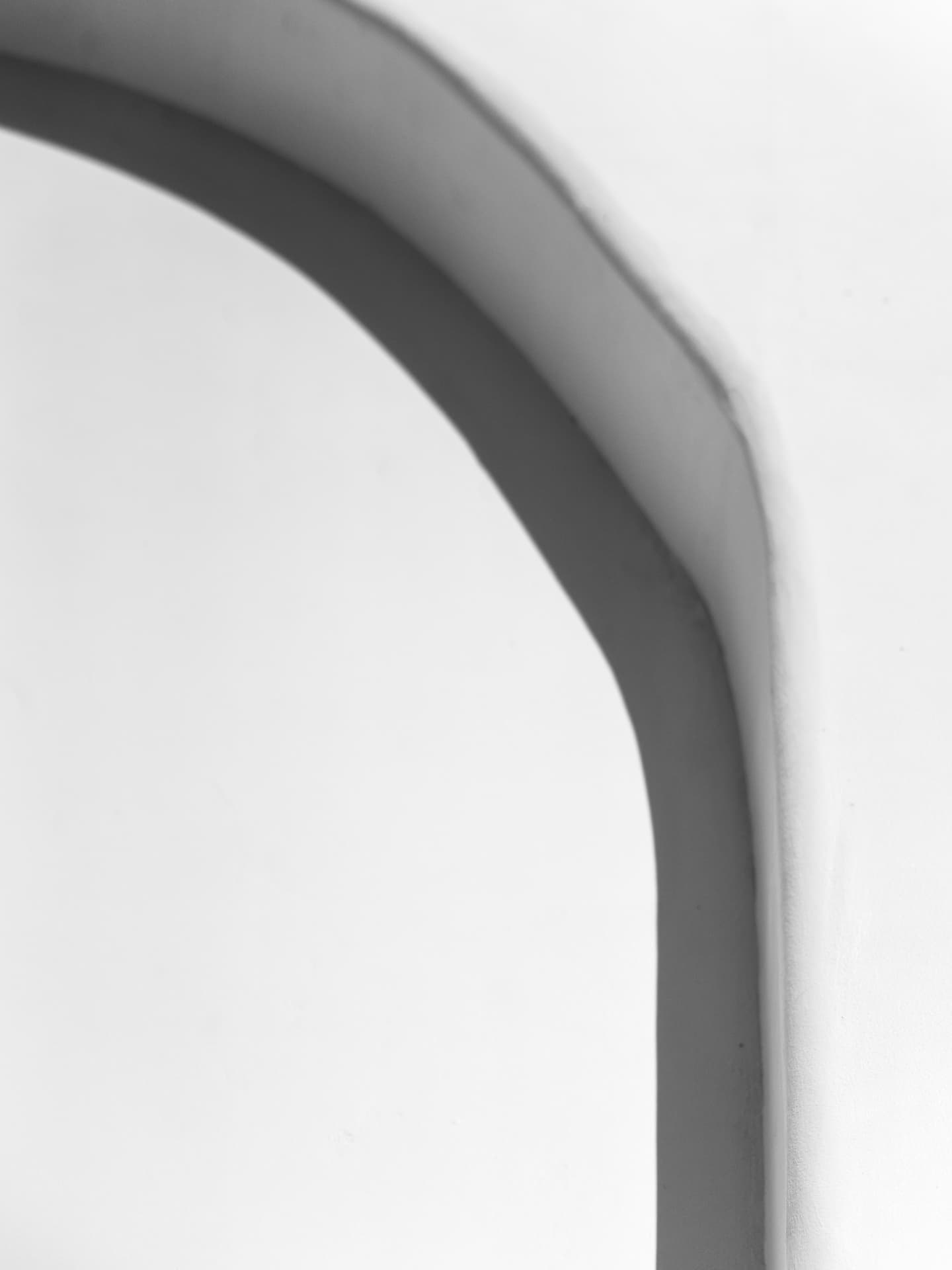 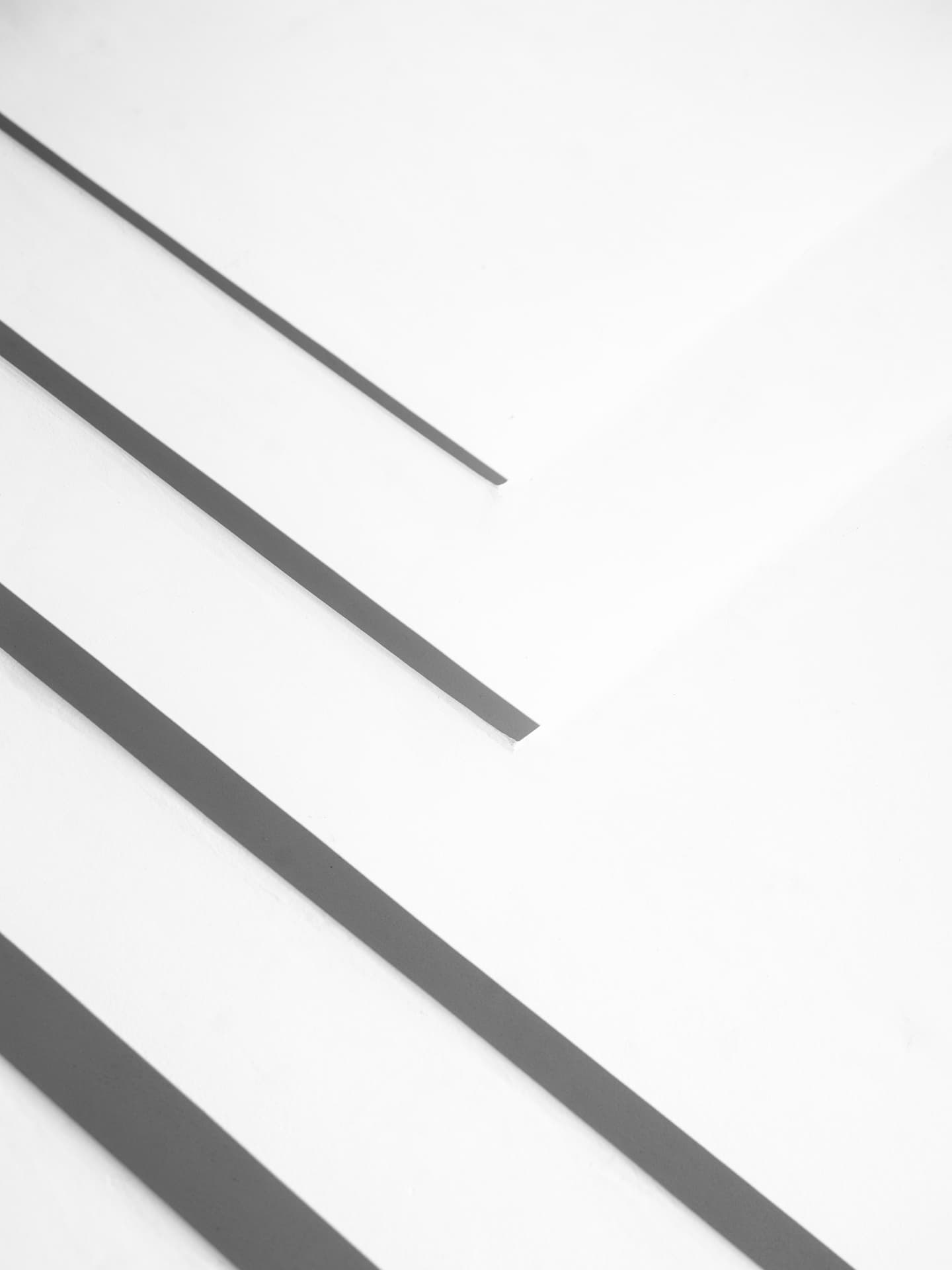 With all the amenities around us, we spent the majority of the day on the Petasos deck and beach. We ate lunch at the restaurant, drank a few Mythos and pińa coladas, and burnt our already-burnt Canadian bodies in the sun. It was, quite simply, one of the best afternoons of my life.

We only had a single day in Mykonos because of that flight delay, so we jumped on the local bus (which just happens to stop right across the street from the Petasos resort) and took the 10-minute bus ride to Mykonos Town. 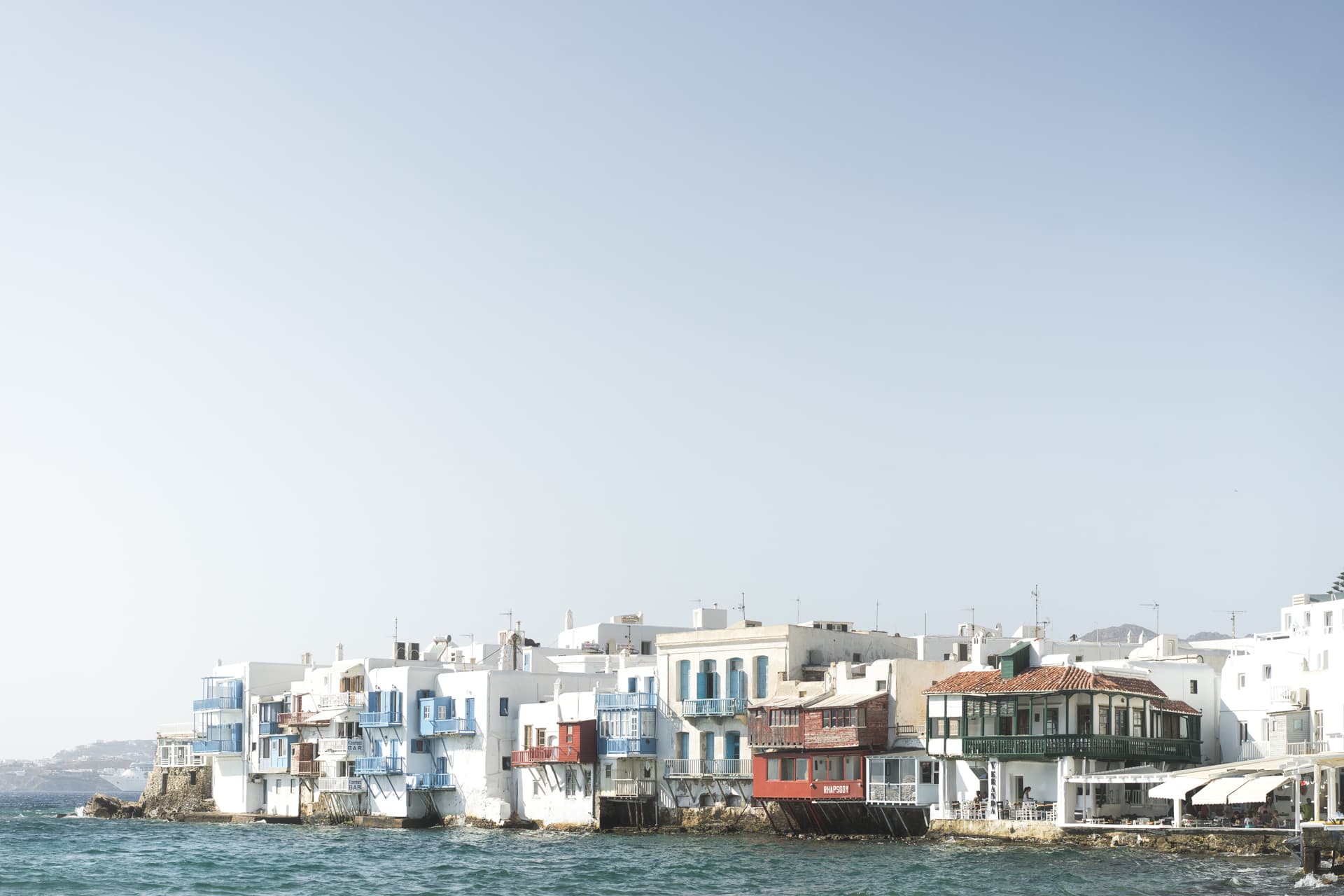 Had we had an extra day, we would have enjoyed Mykonos Town to its fullest potential. The town is filled with classic Greek architecture seen in all postcard photos. The Cycladic wind pushes the Mediterranean right up to your feet in Little Venice and helps to ease the heat. 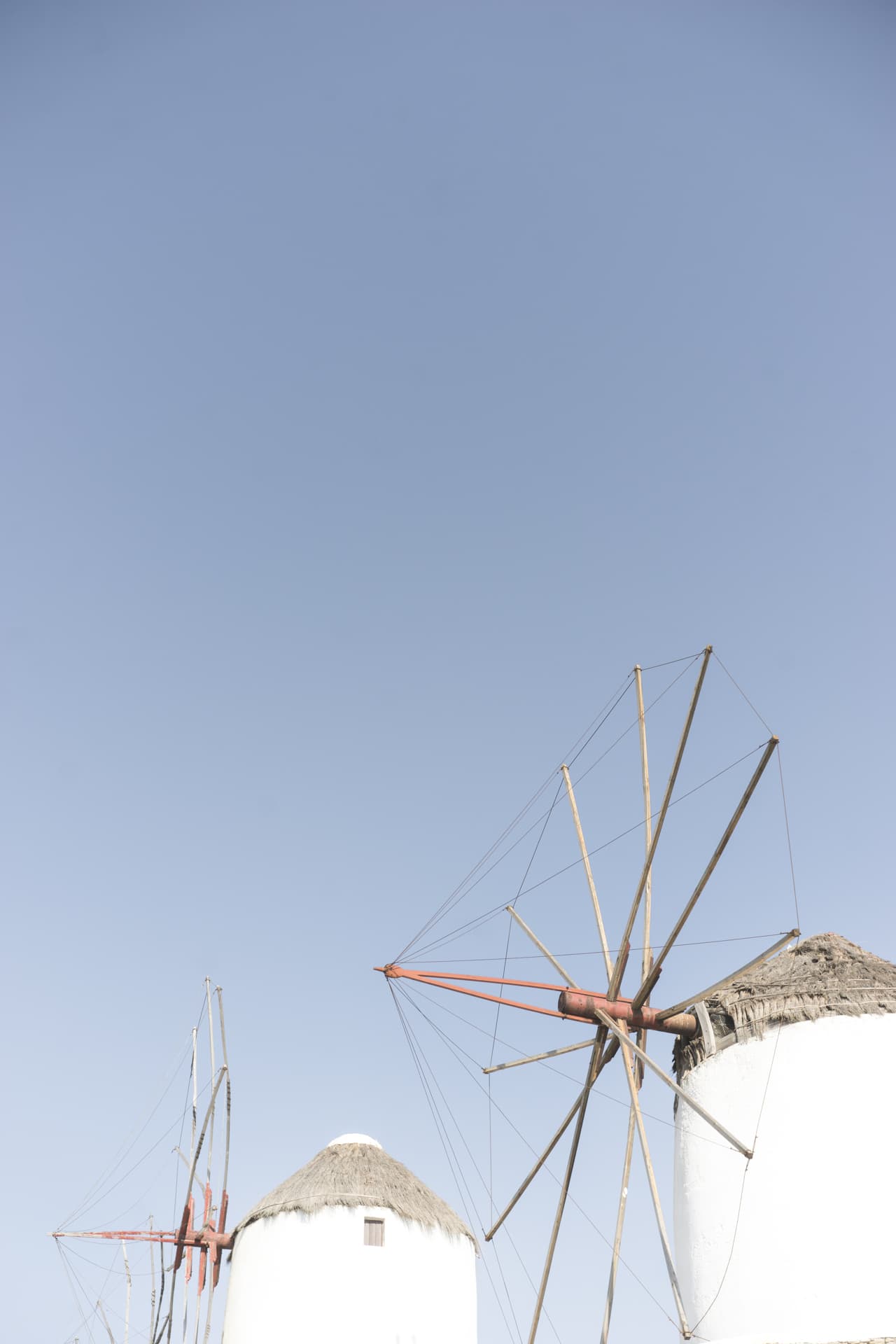 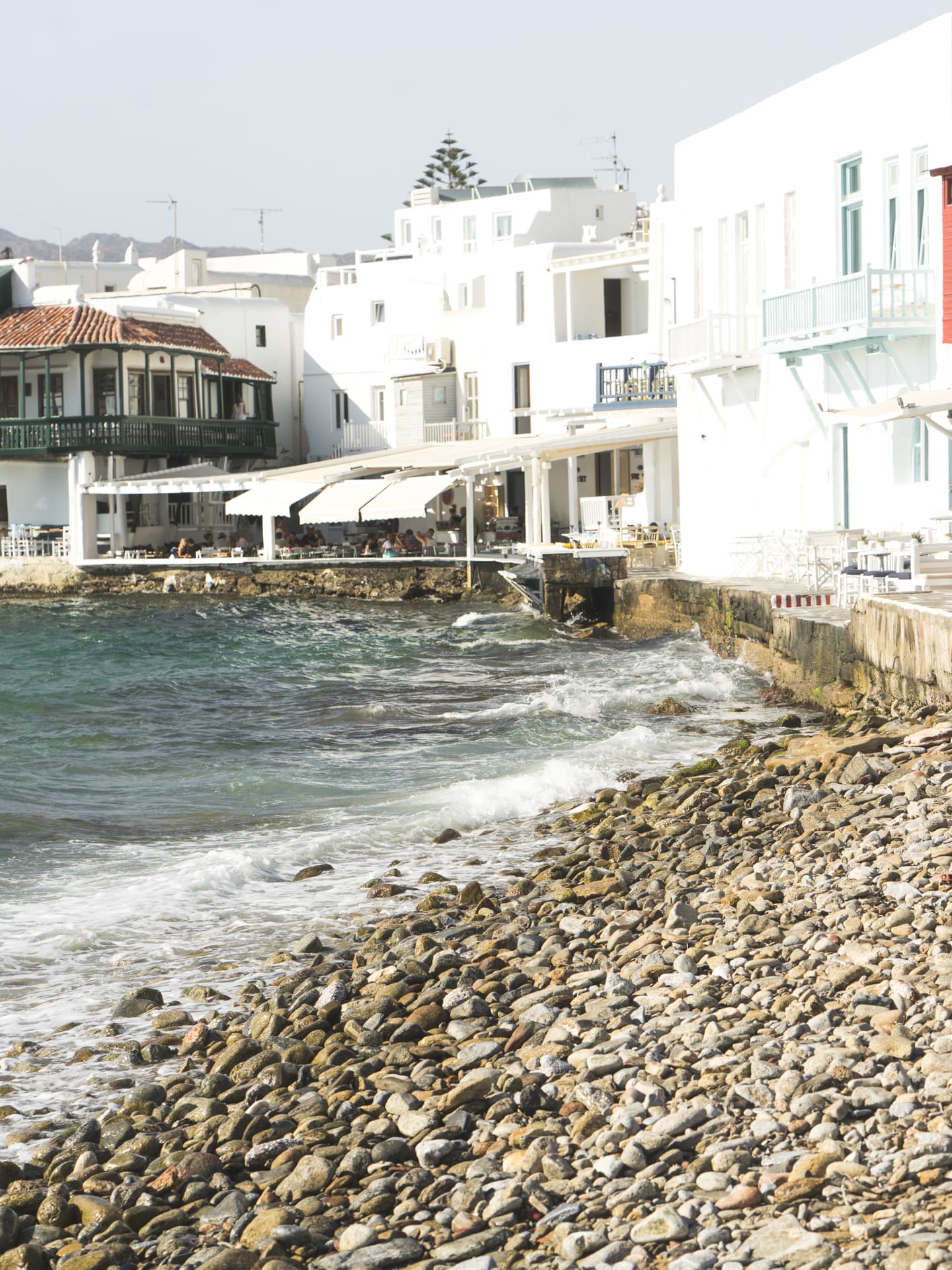 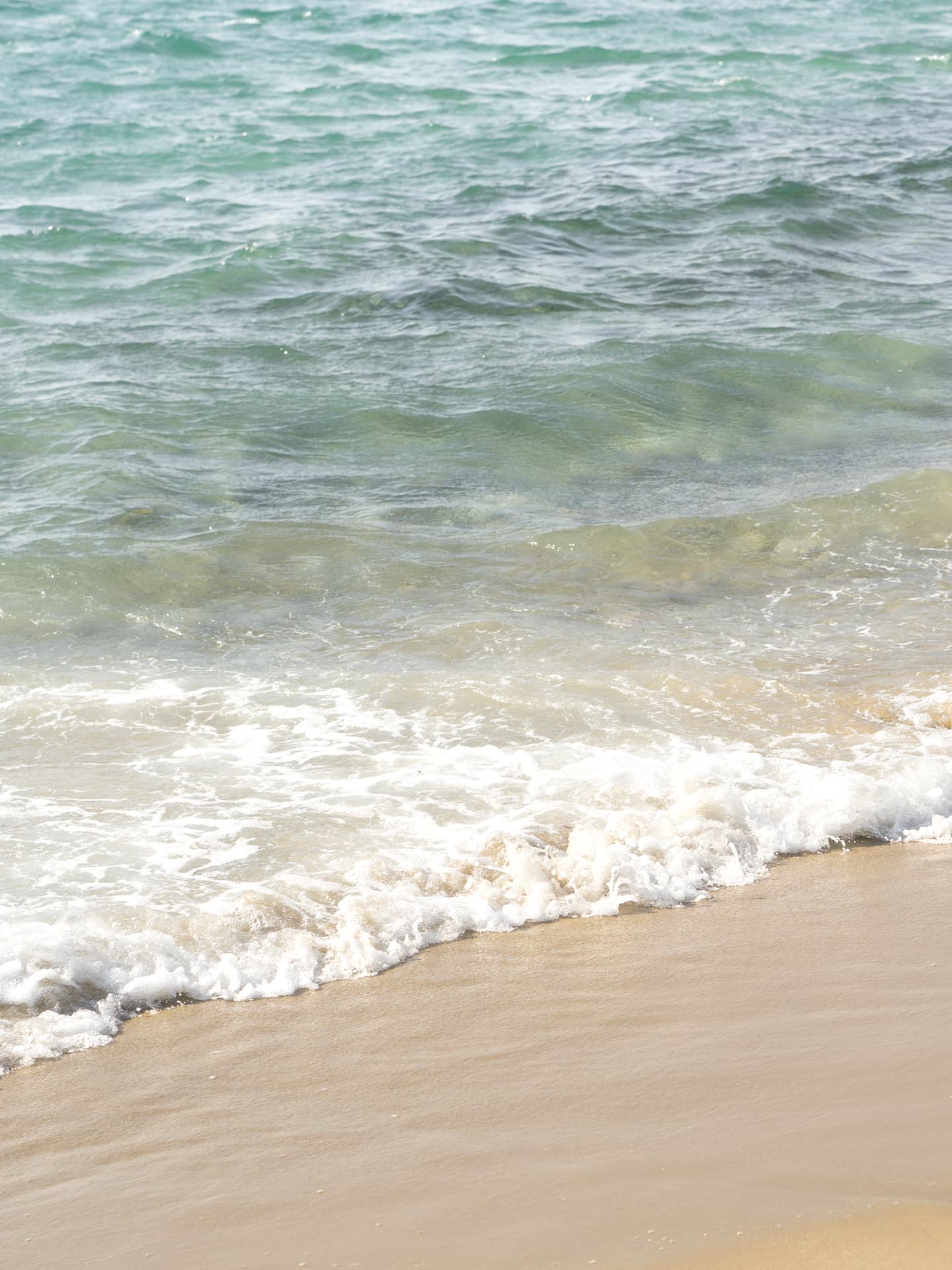 A short two minute walk from Little Venice has you eyeing the famous Mykonos Windmills. The windmills themselves are classic, old — it’s hard to imagine them ever operating on any efficient level. But photos and videos don’t deliver the full Myconian Windmill story: that Cycladic wind is simply unstoppable on the windmill hill. A parking lot behind the windmills had cars layered with dust and sand. Climbing the rocks down to the beach against the wind was it’s own challenge. With winds like this, there’s a reason the Myconian windmills have stayed around as famous landmarks, and as currently-operable windmills. 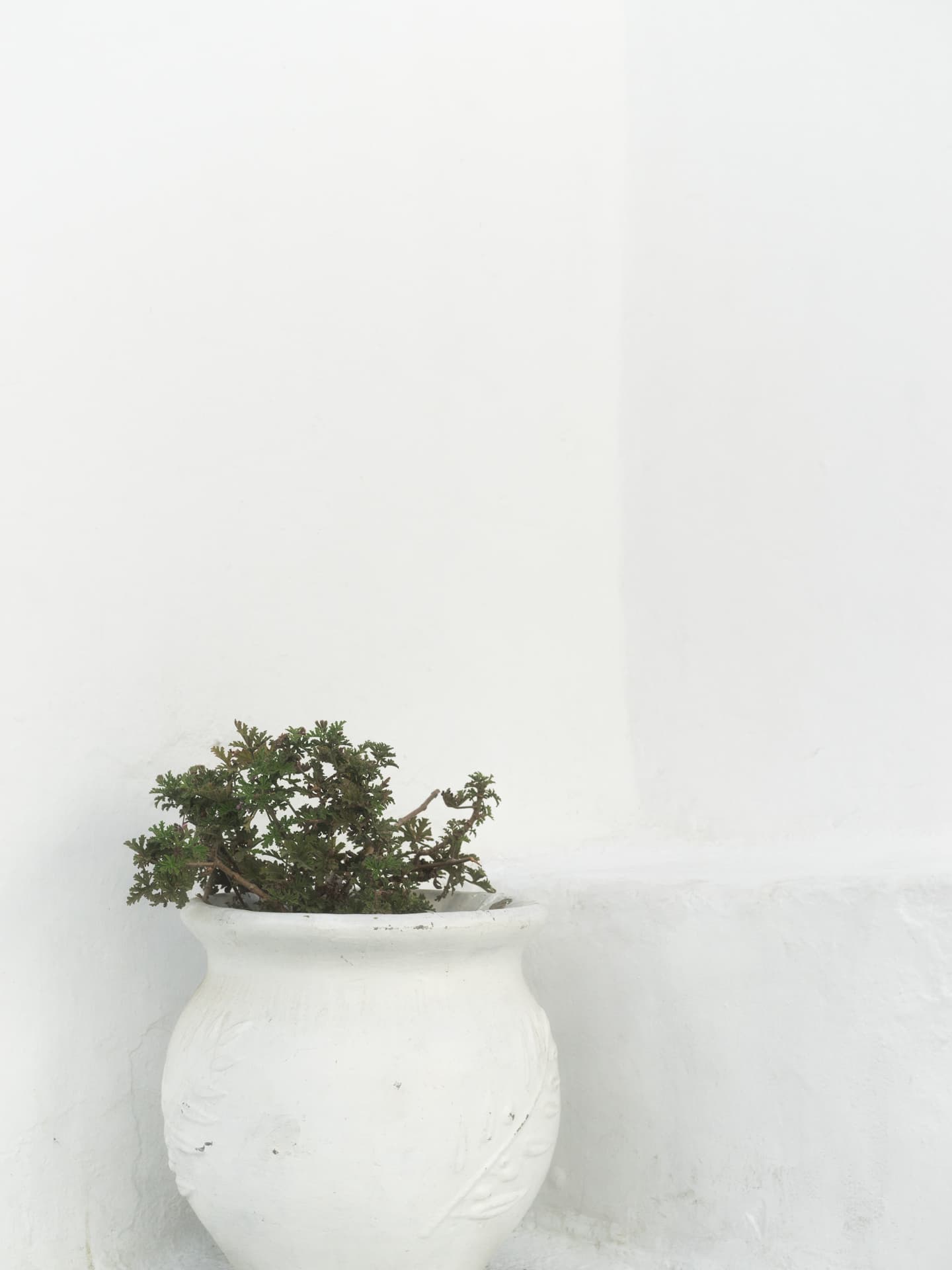 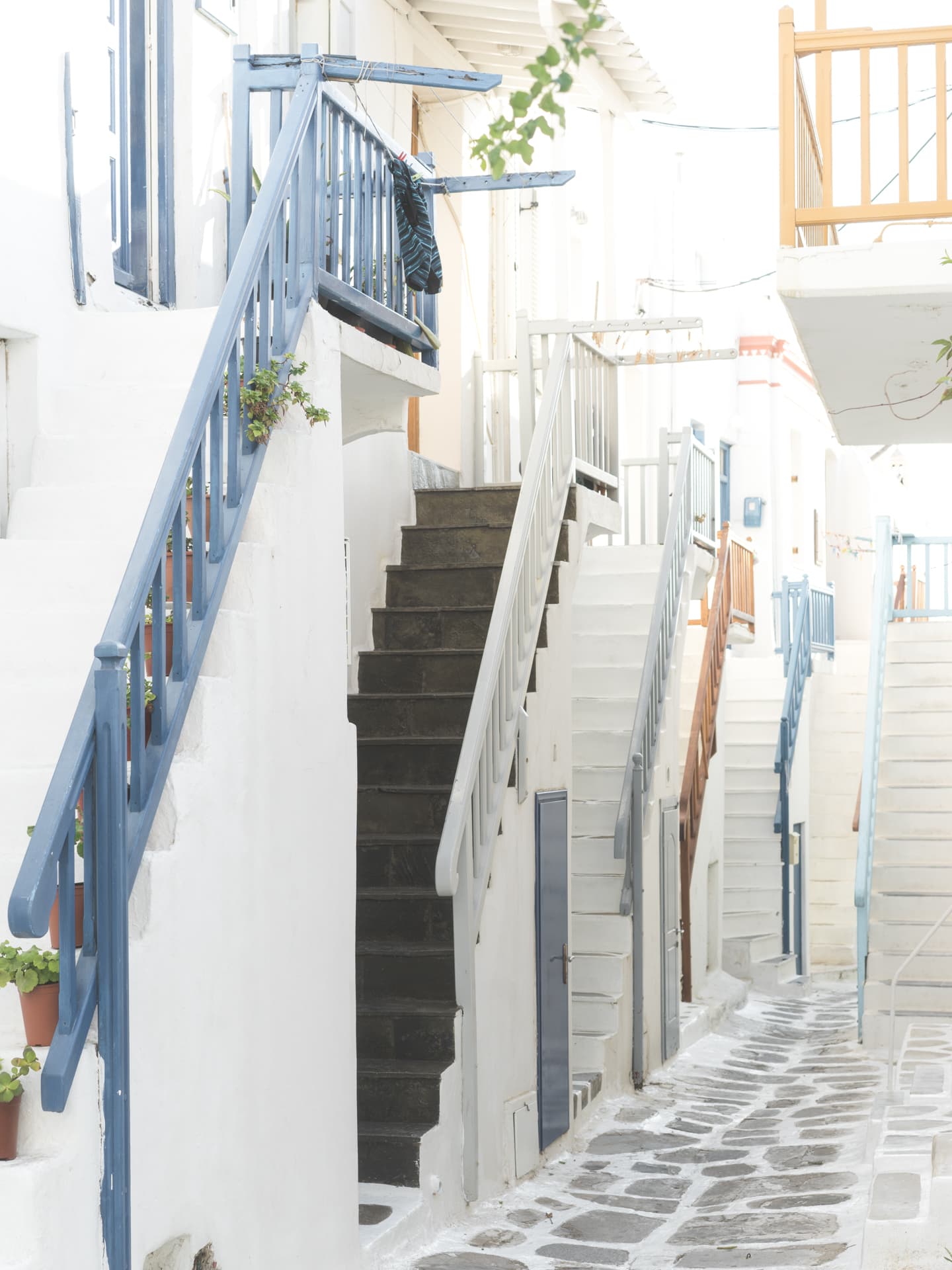 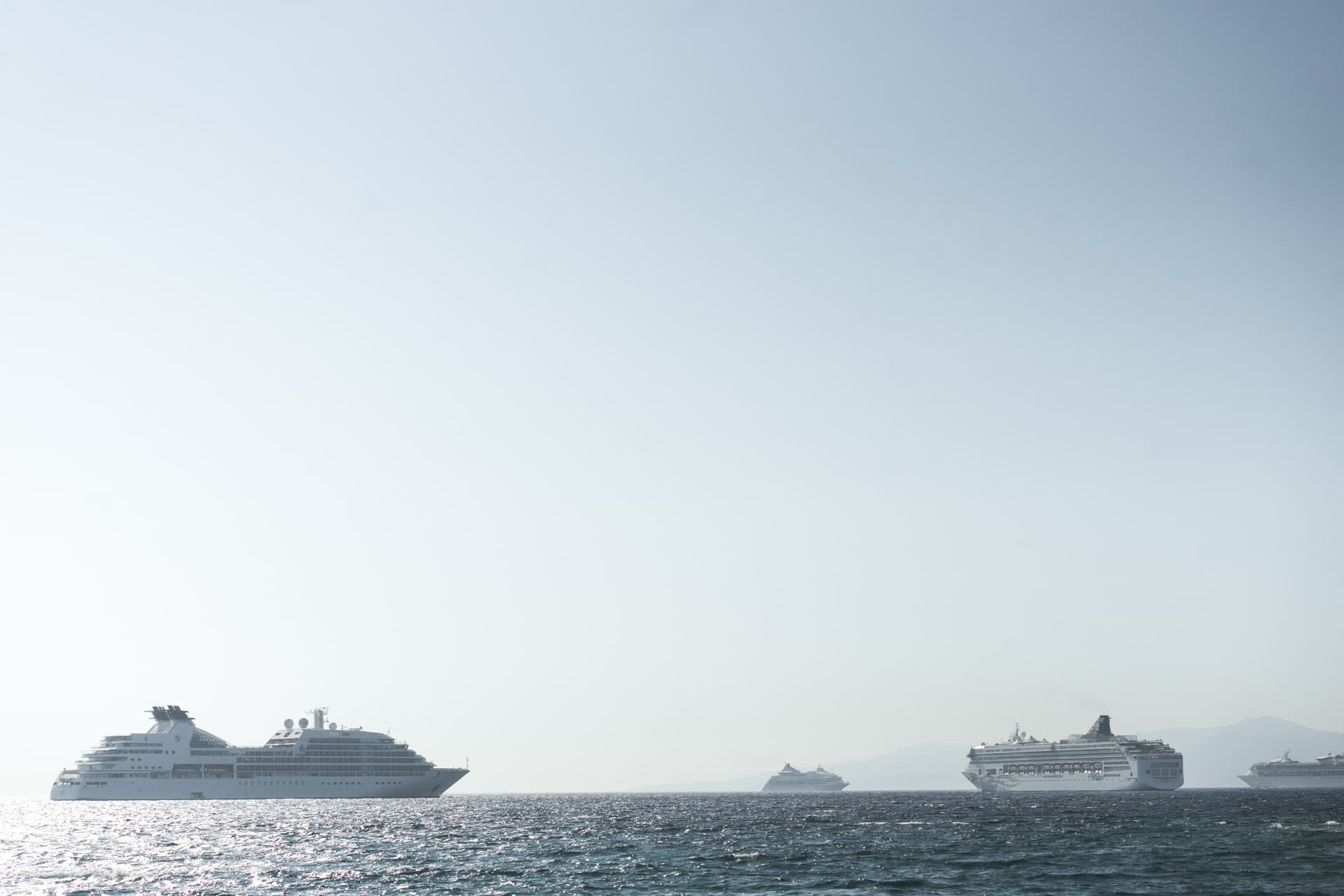 If you’re taking the three-hour ferry to Santorini from Mykonos, you have to venture to a ticket validation office in Mykonos Town. This was a short walk along the promenade from Little Venice and allowed us to take in more of the town. If you’re hungry, there are a number of exceptional restaurants along the water that are sure to give you a Greek delight.

After validating our tickets, we walked back to the main bus stop to return to Petasos, but not before having classic Greek baclava. If you don’t try baclava while in Greece, you’ve missed the point of the entire trip.

Greeks apparently eat dinner much later than North Americans. We returned to Petasos around 7:00PM and headed to the VIP Restaurant for the acclaimed experience. We walked into what felt like a deserted restaurant, only to learn that the general dinner time for Greeks and travellers alike was between 8:00PM and 9:00PM. 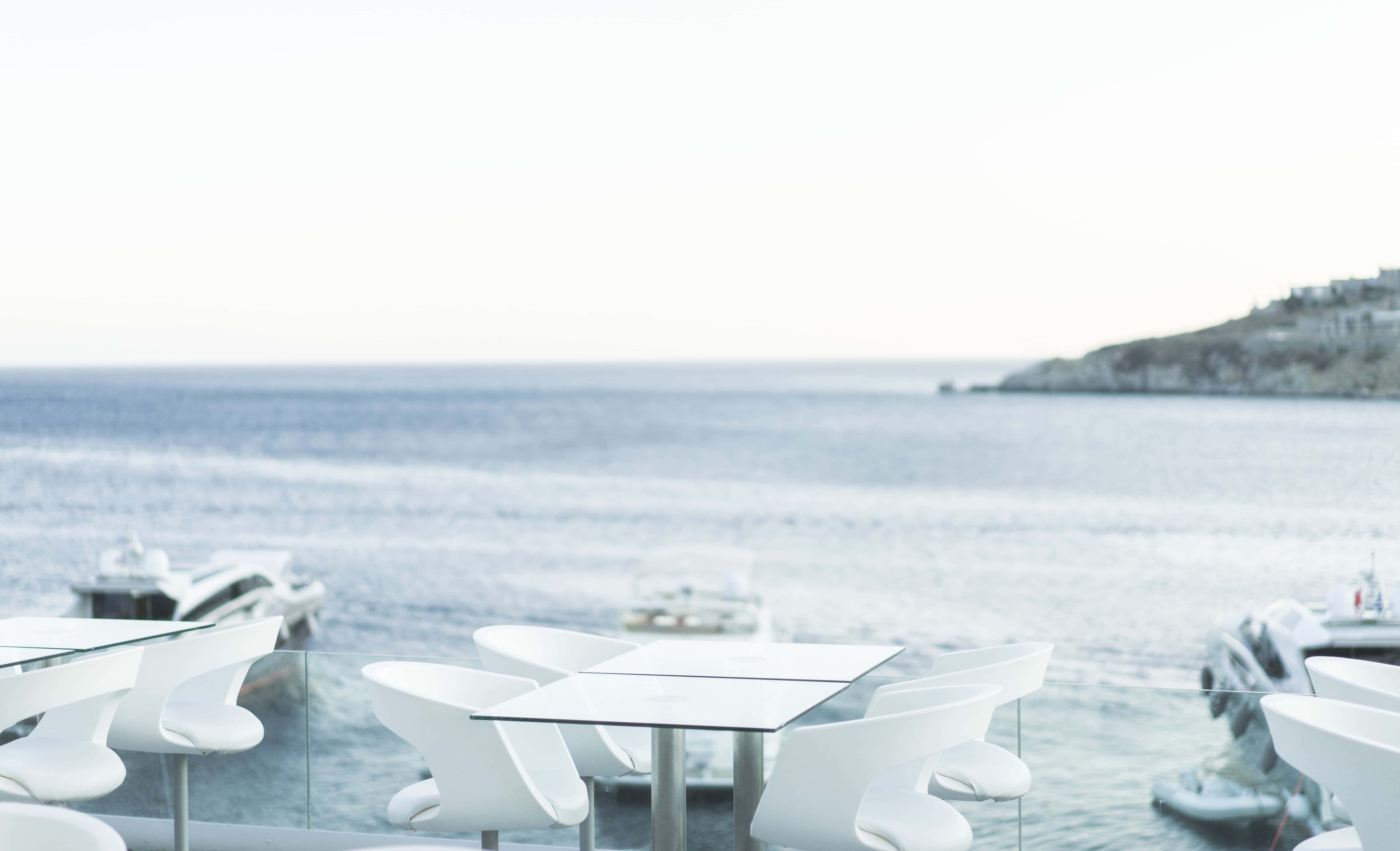 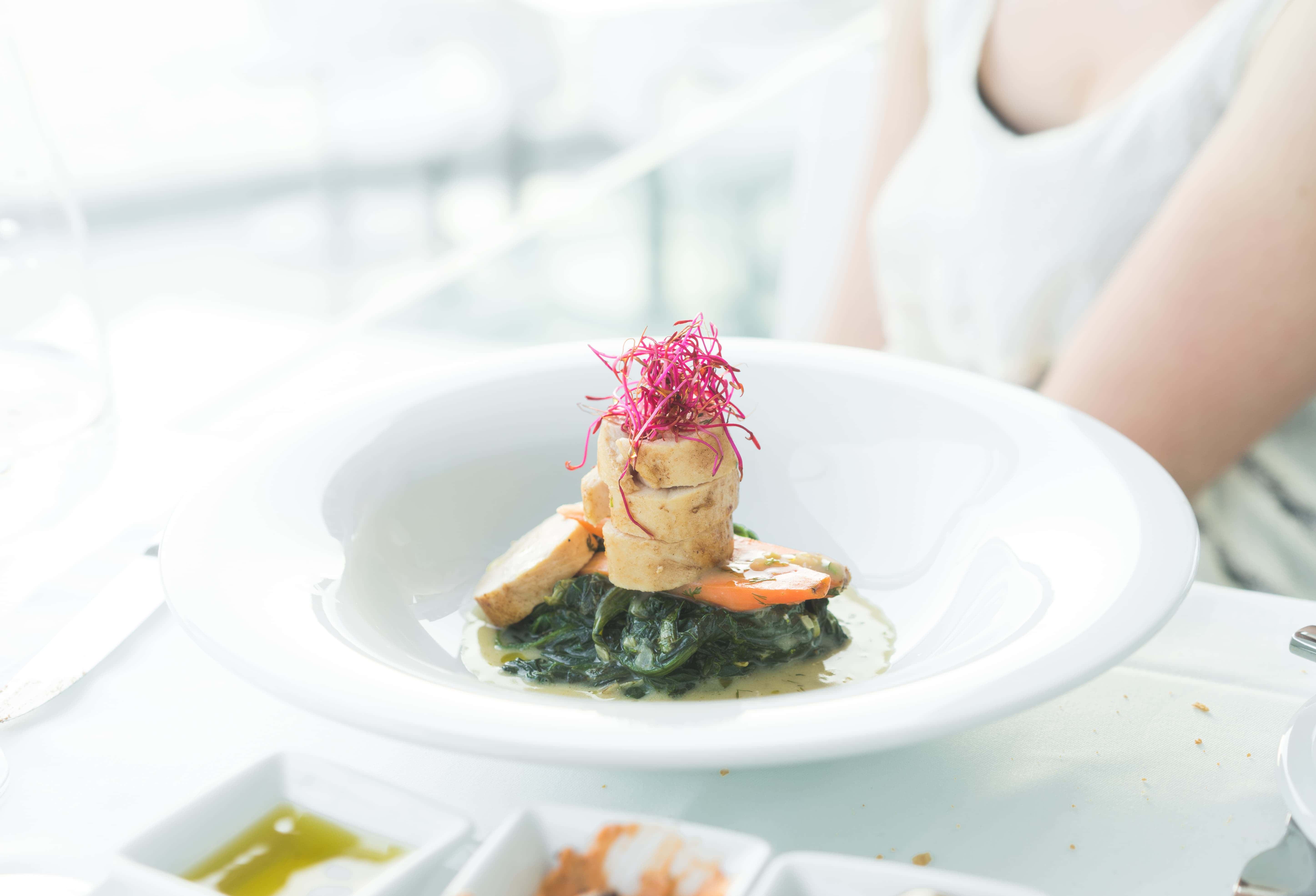 Nonetheless, Jaclyn and I grabbed a table on the water in the deserted restaurant and proceeded to enjoy the most amazing dining experience of our lives. Servers lit candles, offered us appetizers, poured different types of wine, served first, second, and third courses, and delivered one of the tastiest desserts I’ve ever tried. We sat above the water, ate and drank genuine Greek cuisine, and enjoyed the sunset behind the peninsula’s horizon. The resort, as a whole, was simply fantastic, but this dining experience was our very favourite part of the entire trip. 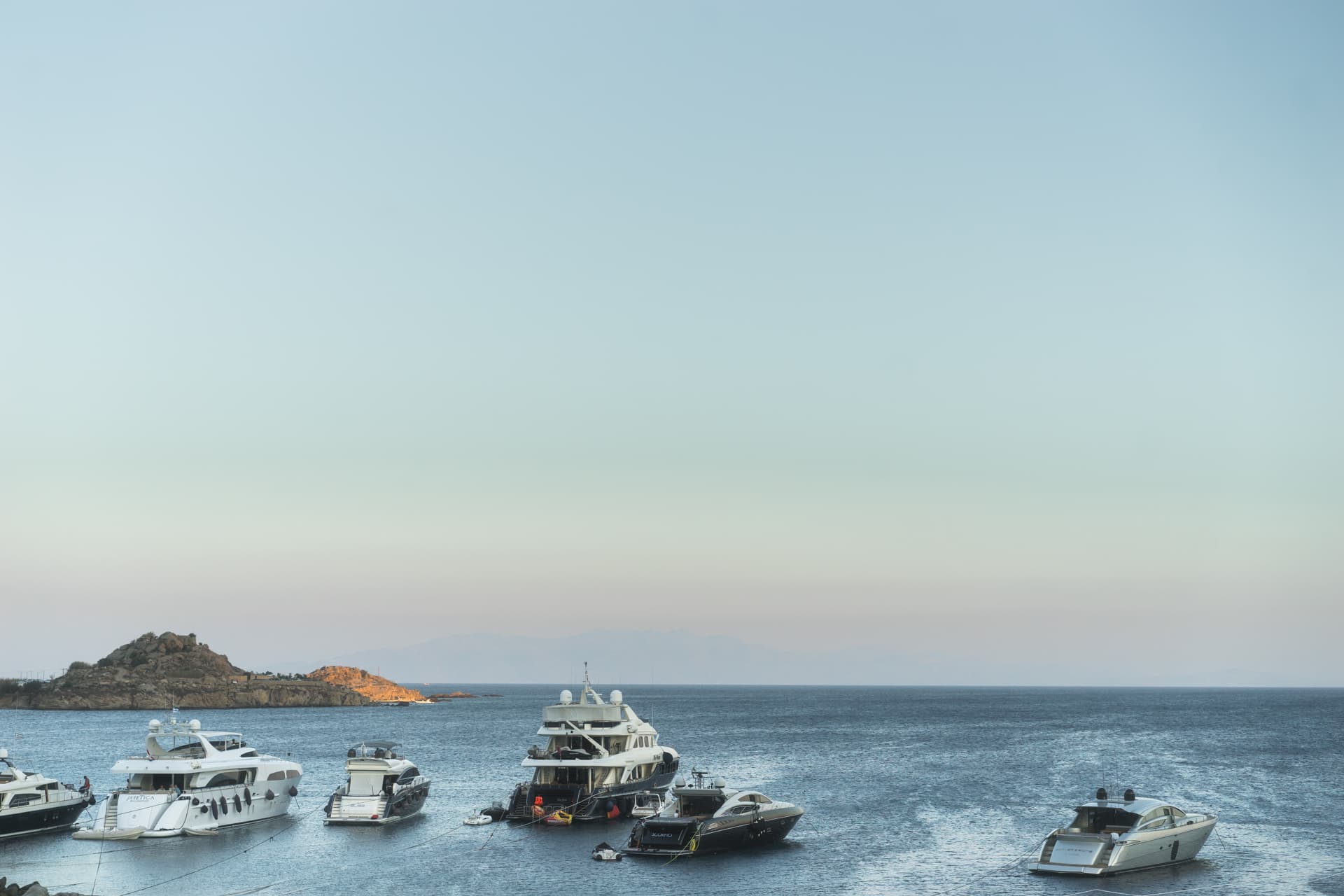 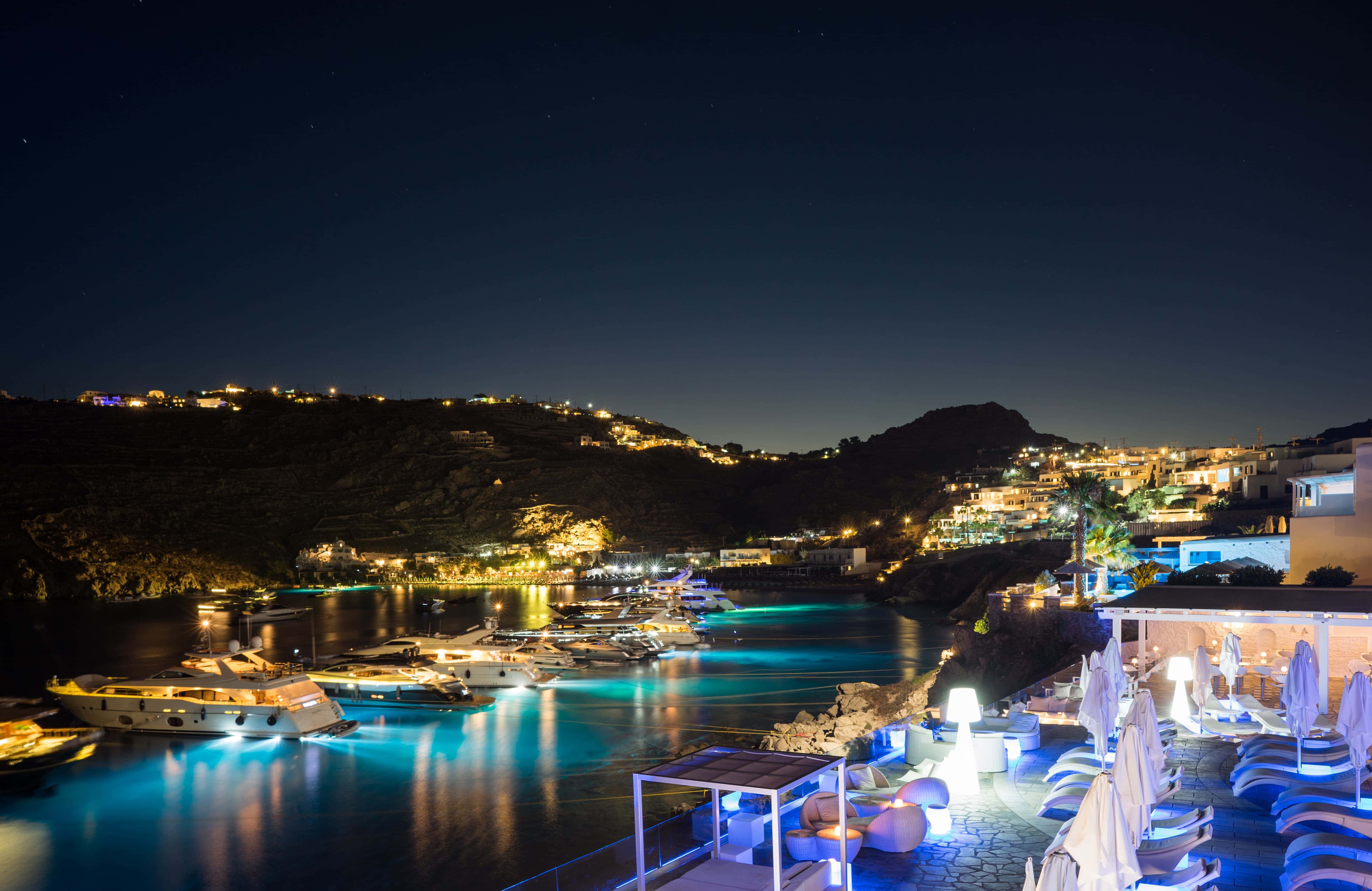 Of course, as everyone else filtered into the VIP Restaurant for dinner, we headed to the top of the restaurant to catch the night views and to capture some long-exposure photographs. The only thing that could have made this evening more enjoyable is if it had taken place on one of the yachts anchored to the Petasos rocks.

Our time at Petasos Beach Hotel & Spa was short, but it sure was sweet. We were treated like royalty from the moment we landed at the airport to the moment the Mercedes Benz dropped us off at the sea port. Gentlemen awaited at the door to take our bags, while hospitable ladies walked us through check-in, breakfast, the resort, and dining in the late evening.

The only caveat, as I’ve learnt in writing this post, is the current difficulty in booking a room at Petasos. I’ve gone as far into the future as I can on most travel sites, but have found Petasos to be fully sold out well into 2018. Maybe a shorter stay will provide an available room or two, and maybe you’ll have more luck than me, but at this point, getting into Petasos will be just as hard as leaving Petasos. 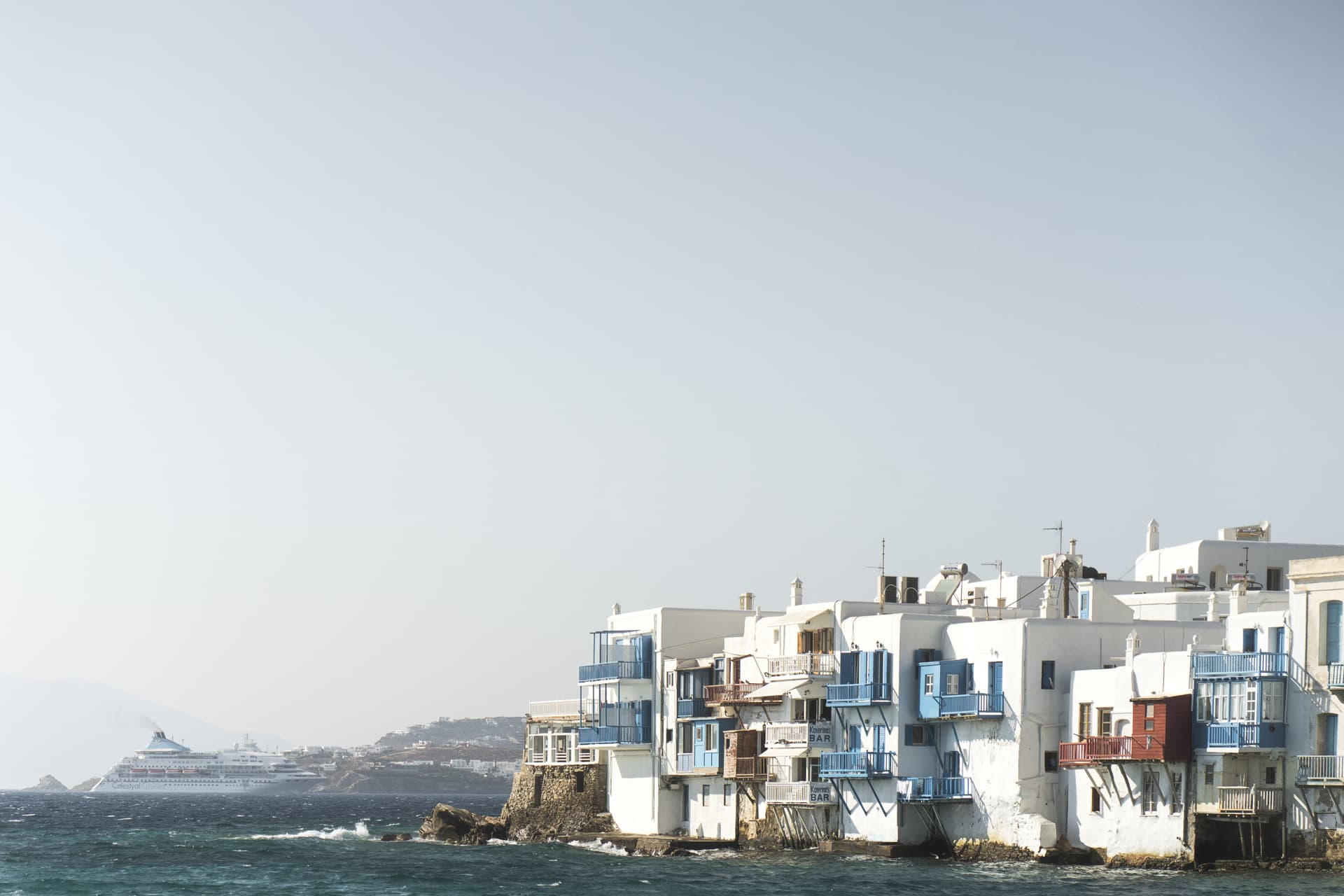 There are times and places to spend money and to enjoy some of the luxuries of life. We contemplated spending a large amount per night to enjoy Cereal-recommended Hôtel de Nell in Paris. Instead, we opted to enjoy (what should have been) two days of Greek luxury in Mykonos. Even though it was only a single day, it was easily our favourite day on our trip, and is likely to have us return sometime in the future.