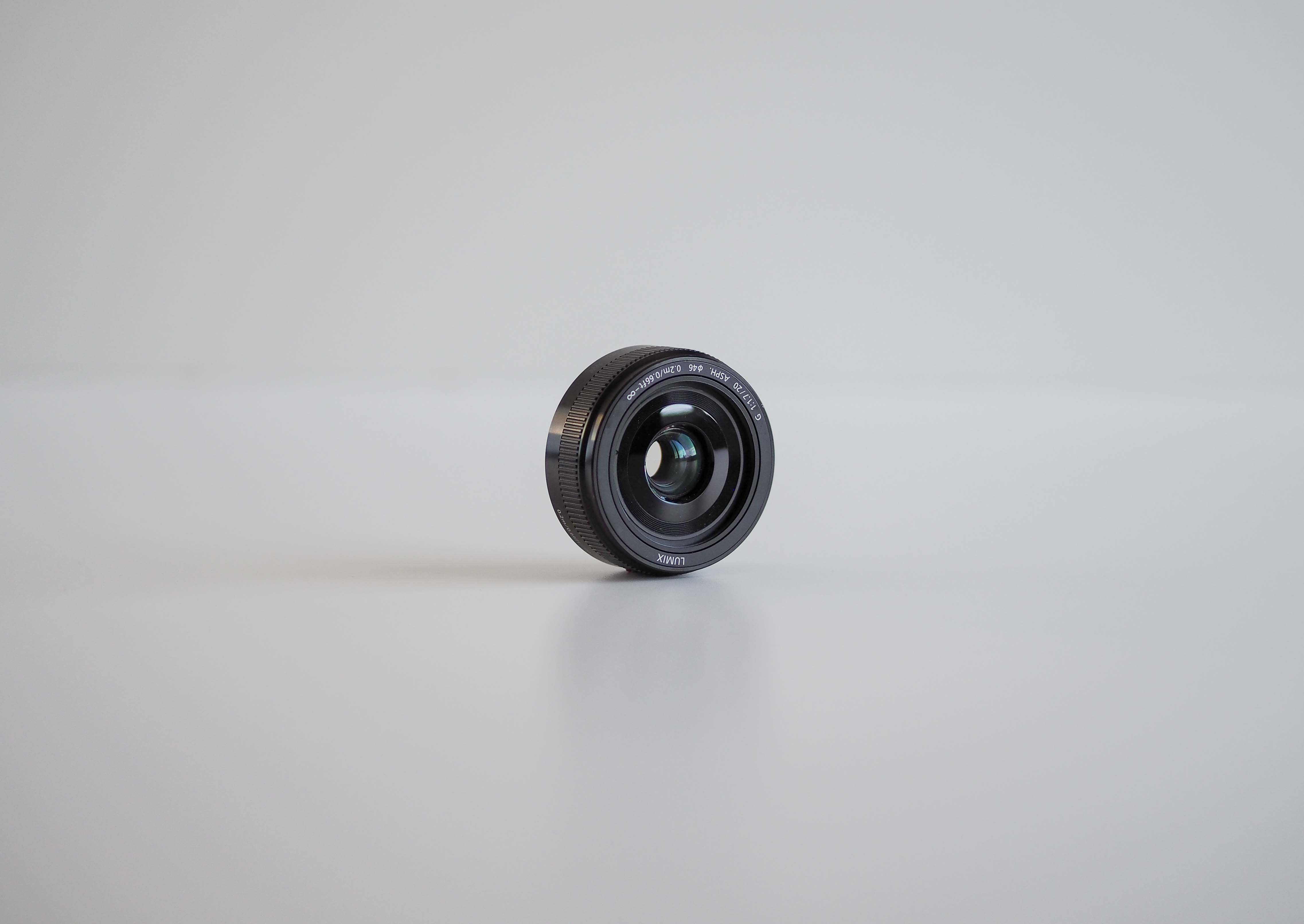 It’s bold to say that something is the best, but I can’t see any other lens being more valuable in a very young Micro 4/3 lens collection. The Olympus 17mm f/1.8 lens is nice and shoots wonderful bokeh, but it costs $100 more than the Lumix 20mm. The Panasonic Leica Summilux 25mm definitely provides better image quality than the Lumix 20mm, but it’s also twice the size and $200 more. Overall, the Panasonic Lumix 20mm pancake lens provides the best combination of image quality, portability, and price for any first time Micro 4/3 lens buyer.

I touched on the Panasonic Lumix 20mm lens in my review of the Olympus OM-D E-M10 camera body back in September 2014. I’ve learnt many things since that review though, and I figured the lens deserved a review of its own.

Photos of the Panasonic Lumix 20mm lens attached to the OM-D E-M10 camera body have been shot by Josiah Wiebe. 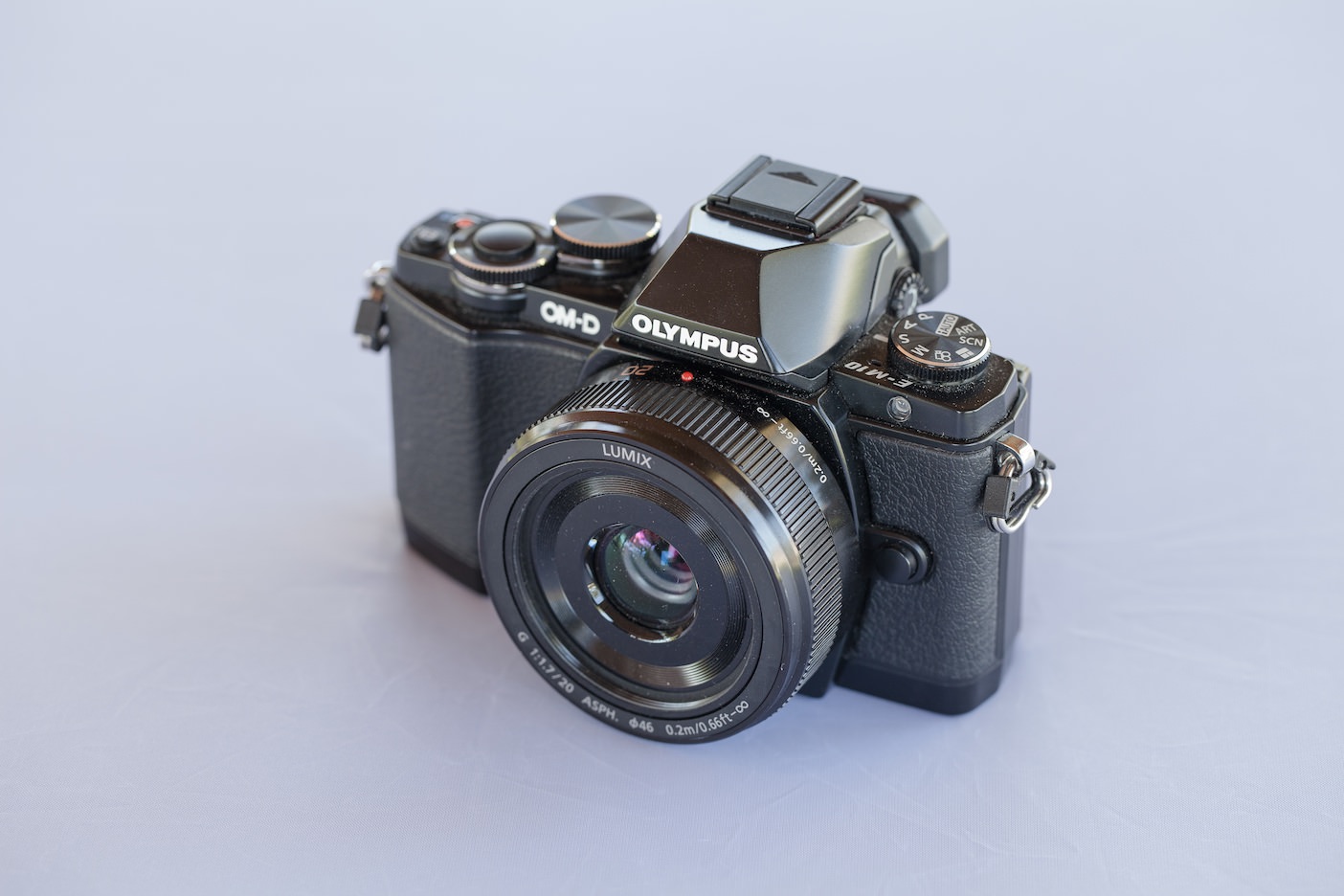 The original Lumix 20mm did come with an autofocus shortcoming though, and this led to a revision in 2013. The revised 20mm pancake lens comes with a sturdier, metallic structure, and better autofocusing capabilities. Overall though, version one and version two of the Panasonic Lumix 20mm are essentially the same lens.

I’d like to get the technical jargon out of the way before getting into the true nature of this lens. 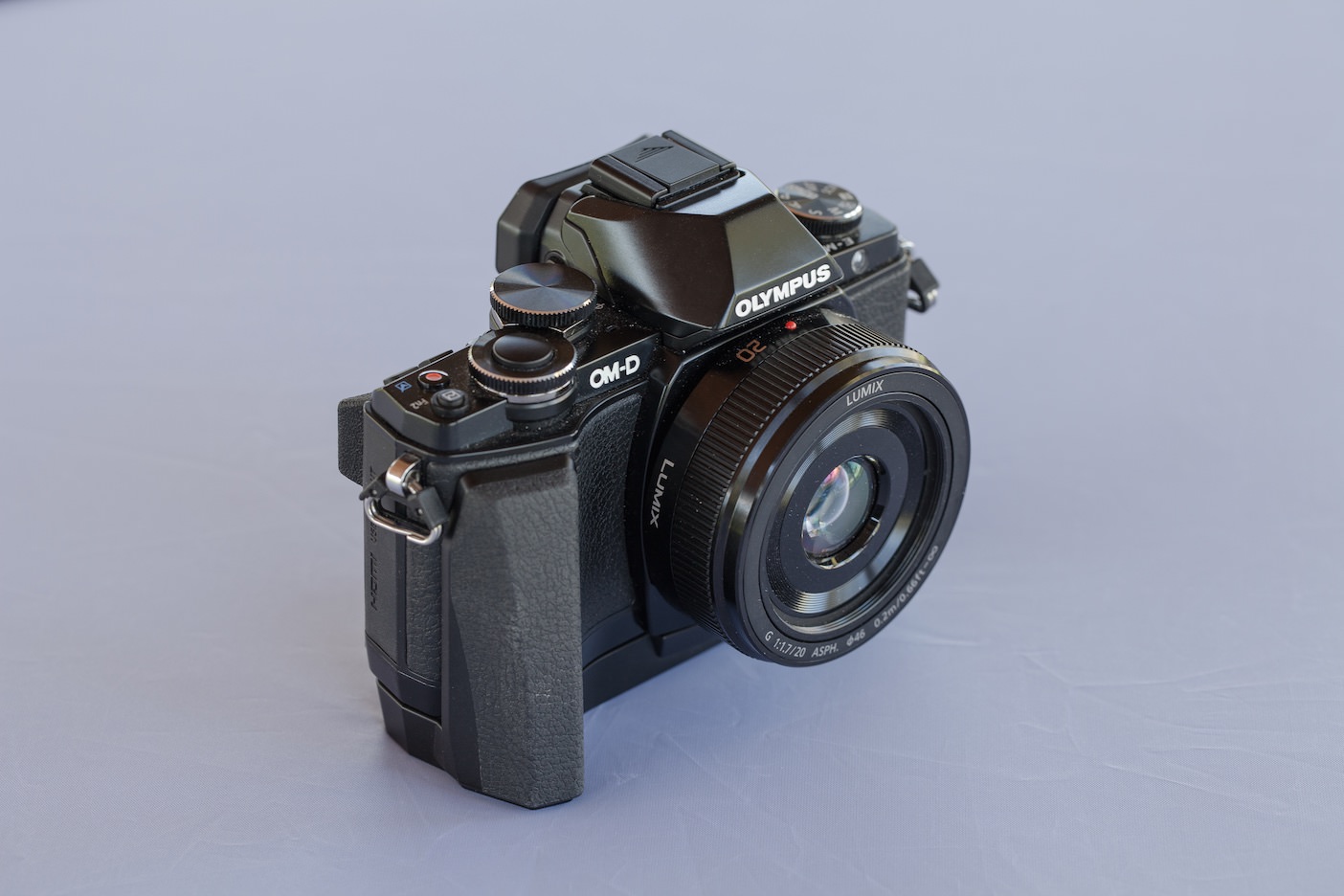 First and foremost, the Panasonic Lumix 20mm lens offers a 40mm full-frame equivalent focal length, which is generally considered to be an odd focal length in the world of 35mm and 50mm lenses. Regardless of its oddity, the 40mm equivalent is a very natural focal length and is fairly close to the natural human field of view. As a result, what you see with your own eyes is often what you get with the 20mm Lumix. 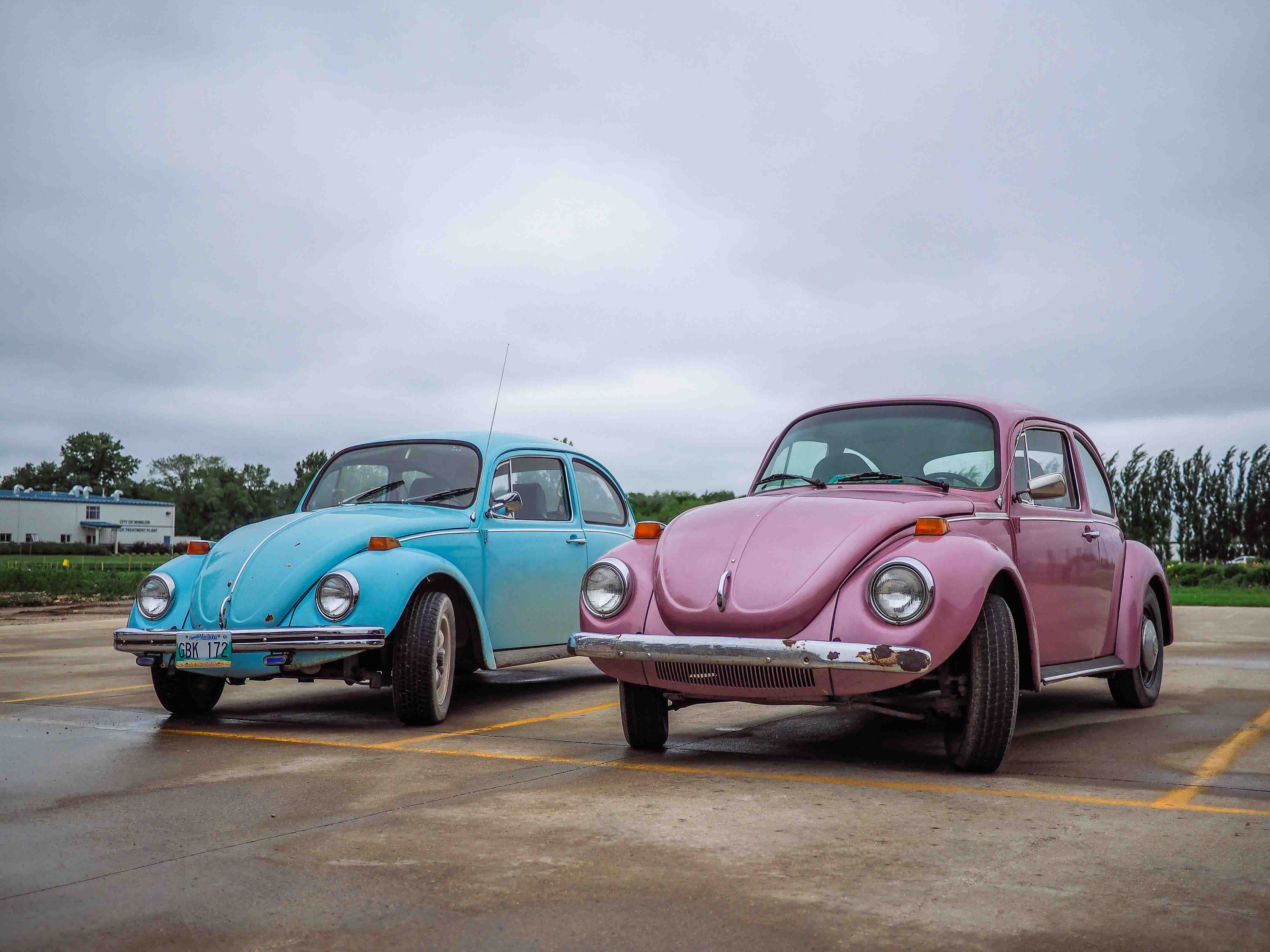 Ninety-nine percent of the shots on The Newsprint have been shot with this natural 20mm (40mm) focal length and I can’t see any other focal length being more flexible.

The caveat to the Lumix 20mm lens is that it’s a prime lens — many potential purchasers will be expecting the lens to zoom in and out.1

Some may look at this as a negative, but I feel the optimization of the lens at an exact focal length does wonders for the Lumix 20mm. Not only does it act as a constraint (which often helps with the creative process), it teaches the ins and outs of photography. Photo composition becomes a major tenet and area of focus when shooting photographs with a prime lens. This should speak directly to anyone jumping into photography and wanting to learn as fast as possible. 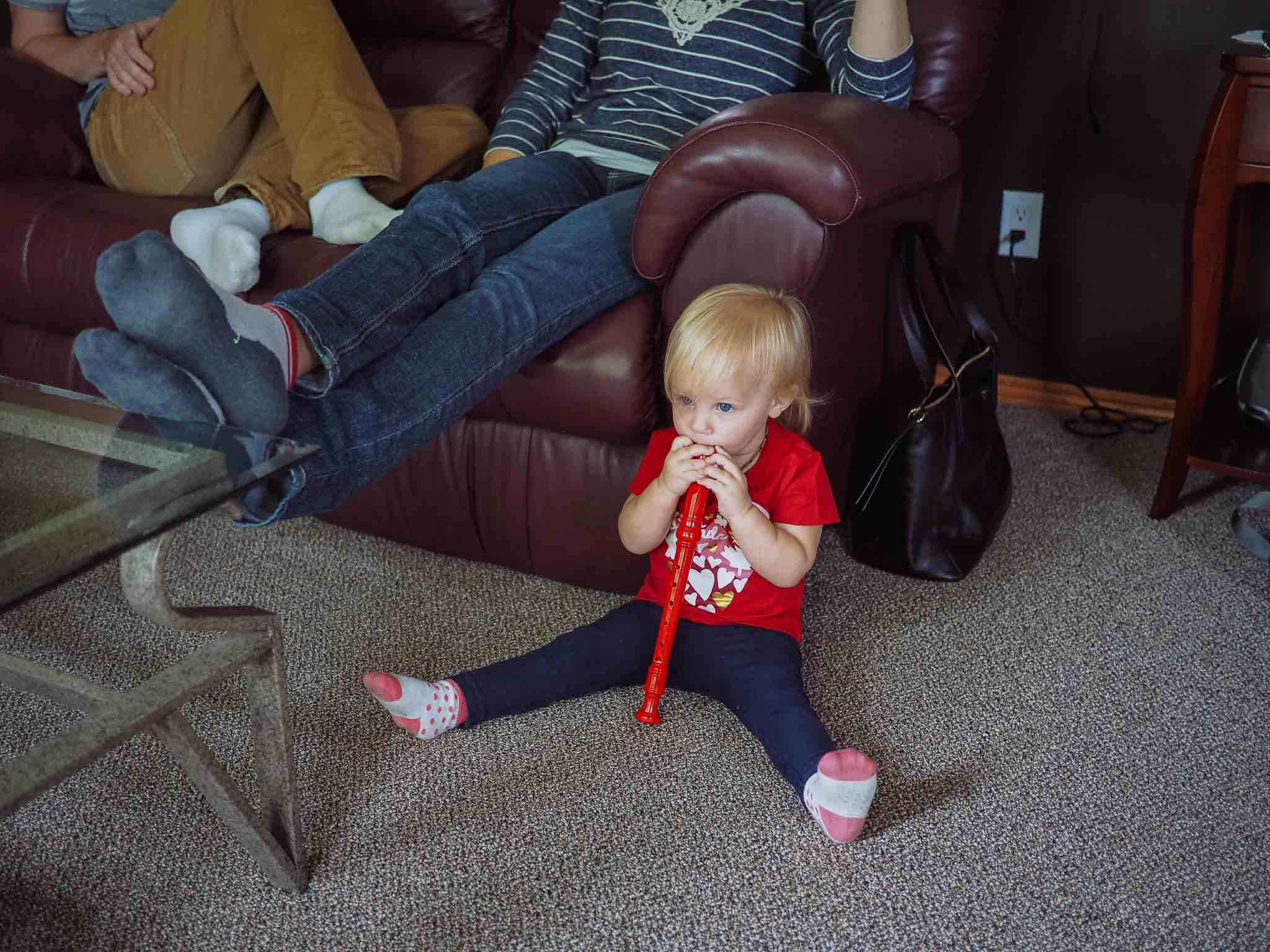 The f/1.7 aperture is speedy and allows light to pour through the glass. Shooting photos in a dimly lit basement is possible thanks to faster shutter speeds enabled by the Lumix 20mm lens. Thanks to this large aperture, and the overall size and weight of the pancake lens, keeping this lens on your camera body for shots of kids in the basement is actually feasible. 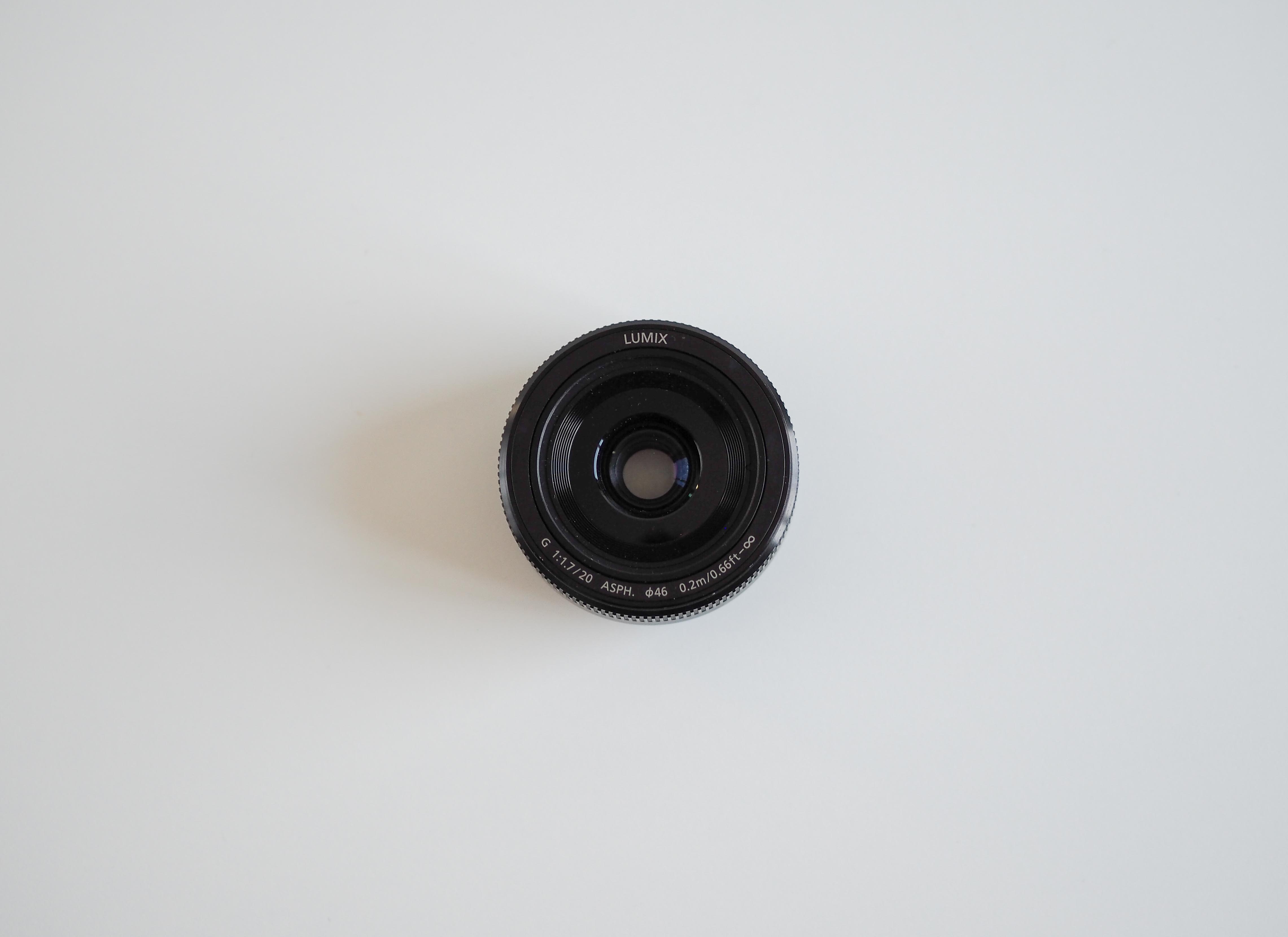 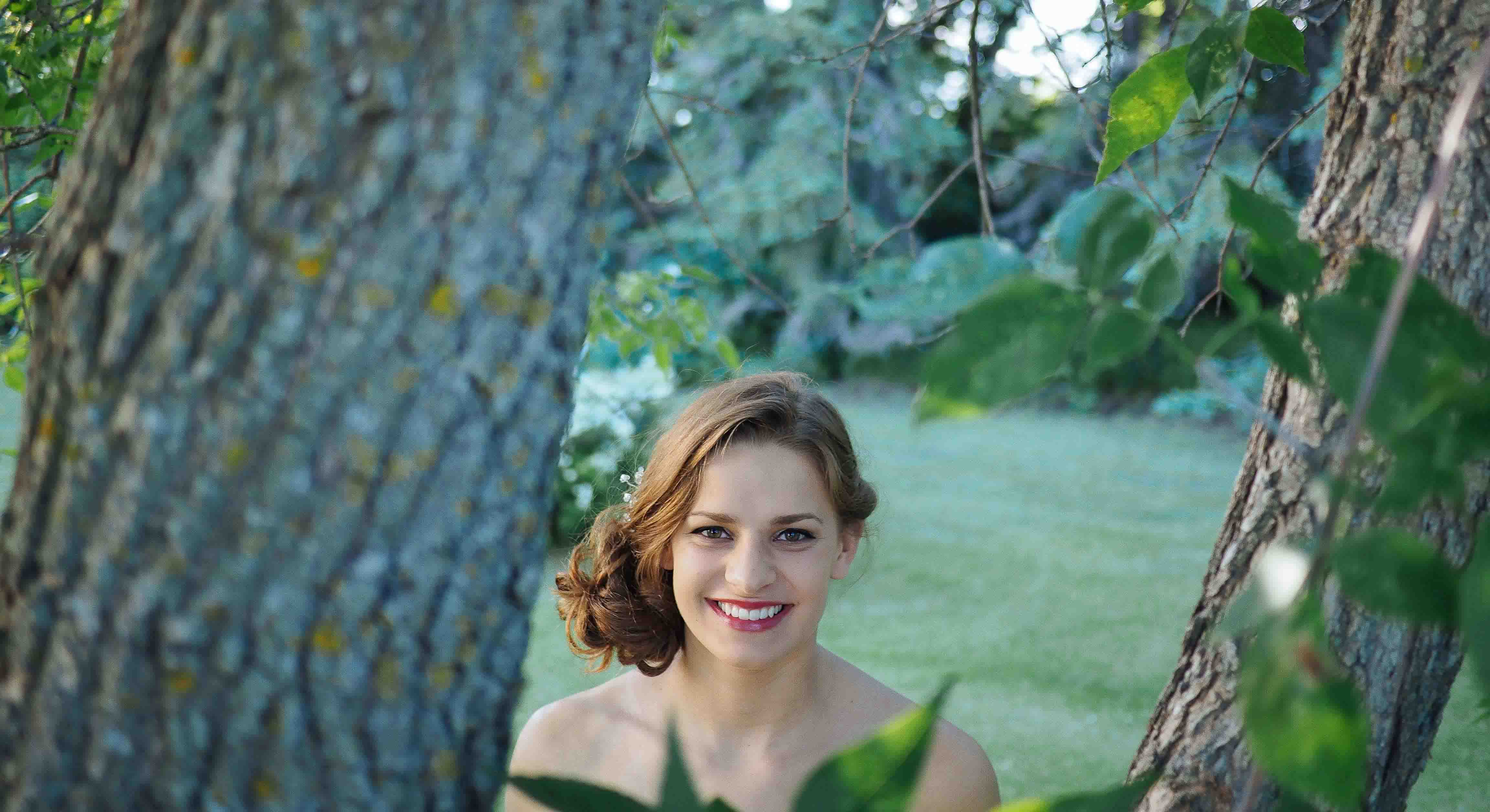 Lastly, the lens is equipped with seven aperture blades. This helps create a smoother background when isolating a subject in a photo. Seven aperture blades has become a very common trait these days and the 20mm lens doesn’t lag behind in any fashion.

The hallmark feature of the Panasonic Lumix 20mm is its unmistakable size. The lens is super thin and compact, allowing for maximum usability and versatility. I’ve often found I forget the Lumix lens is attached to my E-M10 camera body when out and about. It’s the only lens in my collection I feel comfortable shooting one-handed while holding away from my body. 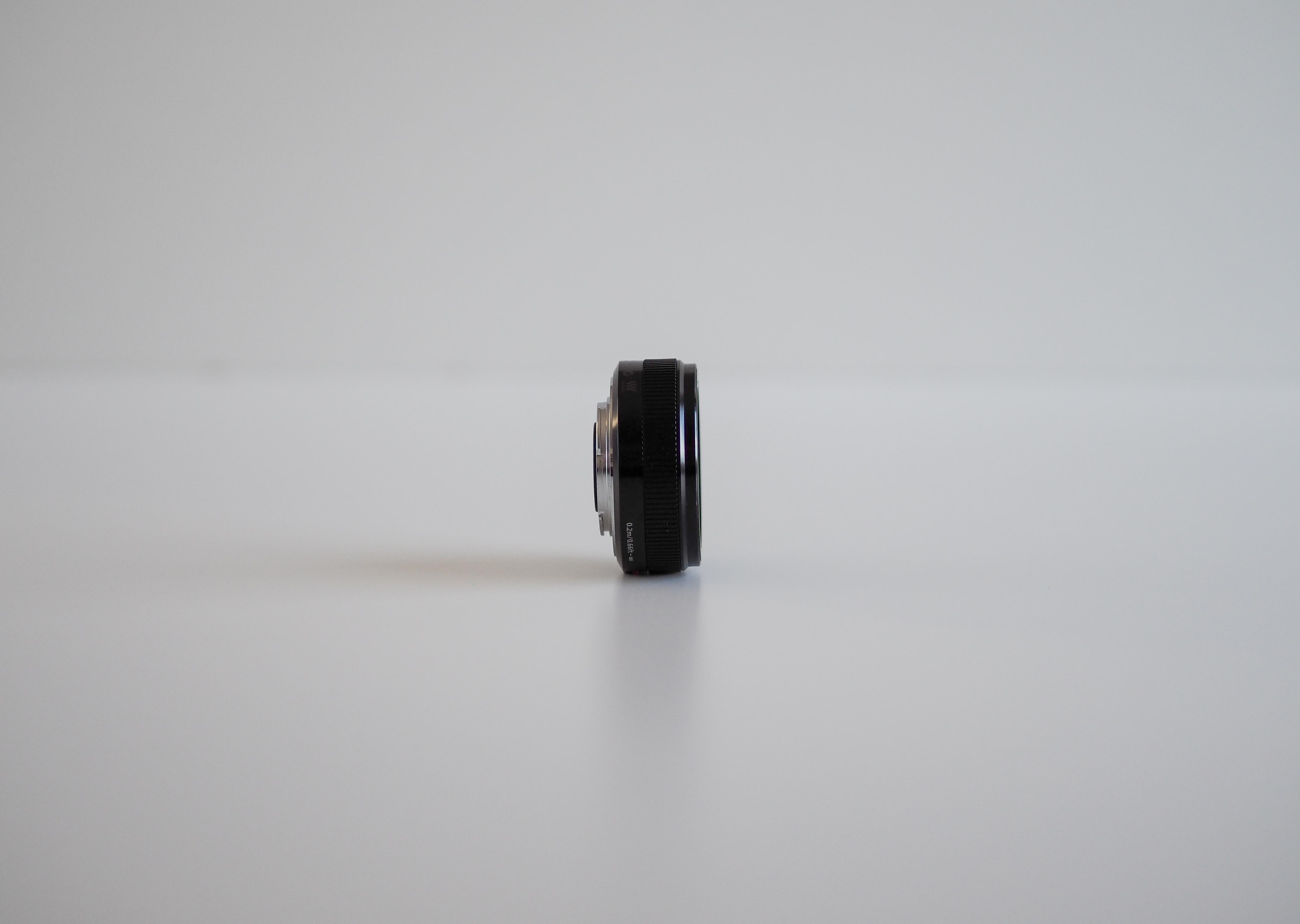 The Panasonic 20mm pancake lens has a metal structure that improves its durability and rigidity over the previous generation. Yet, despite its metal body, the lens is still significantly lighter than most lenses in the Micro 4/3 library. 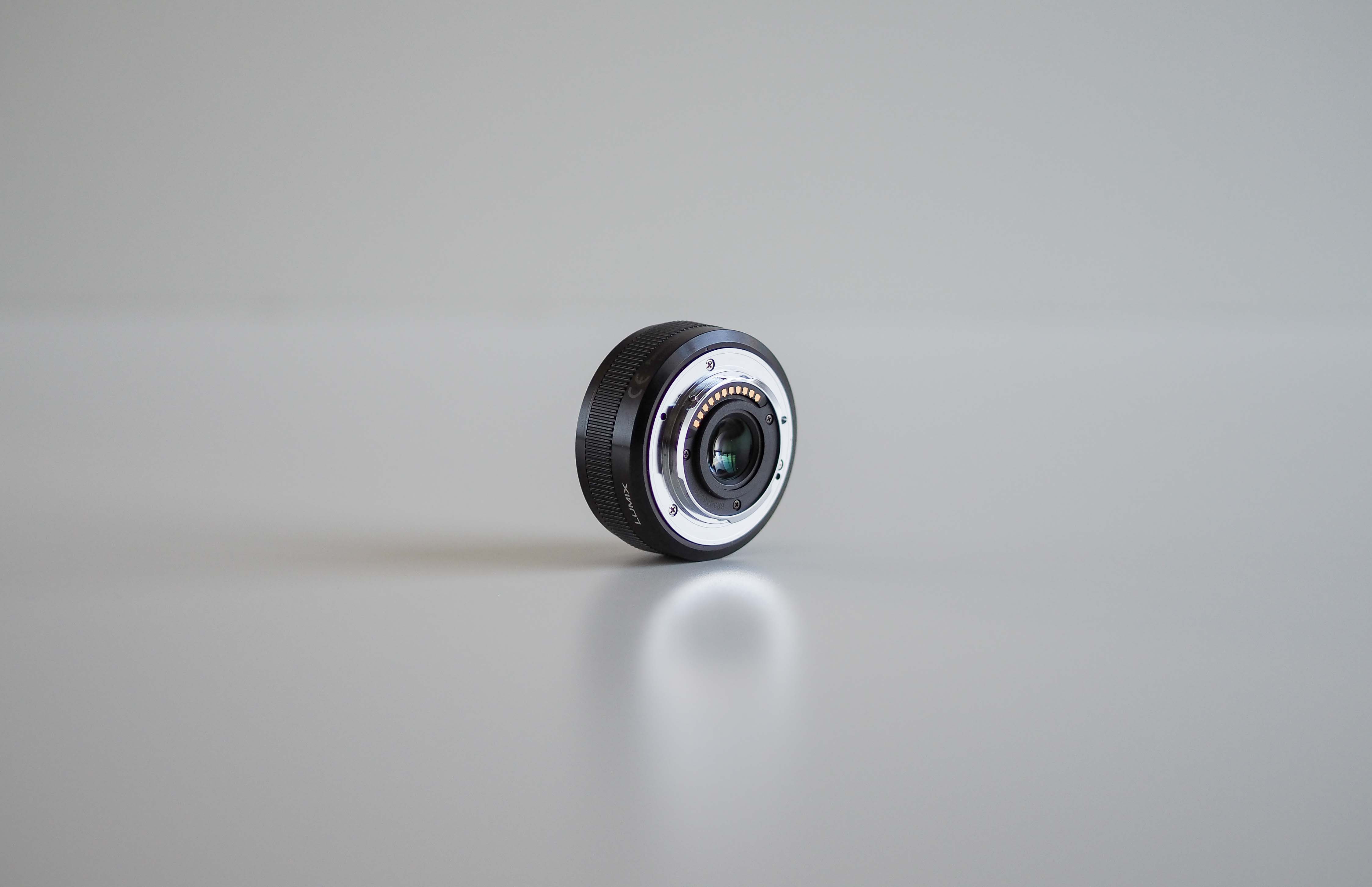 The lens mount is made of metal, adding extra durability to the lens. A metal mount isn’t as necessary for the 20mm Lumix lens however — generally, metal mounts eliminate breaking at the point of contact between the mount and the camera body when the entire rig is picked up by the lens. Since this lens is so thin to begin with, I can’t see many people choosing to pick up their camera by grabbing the lens. 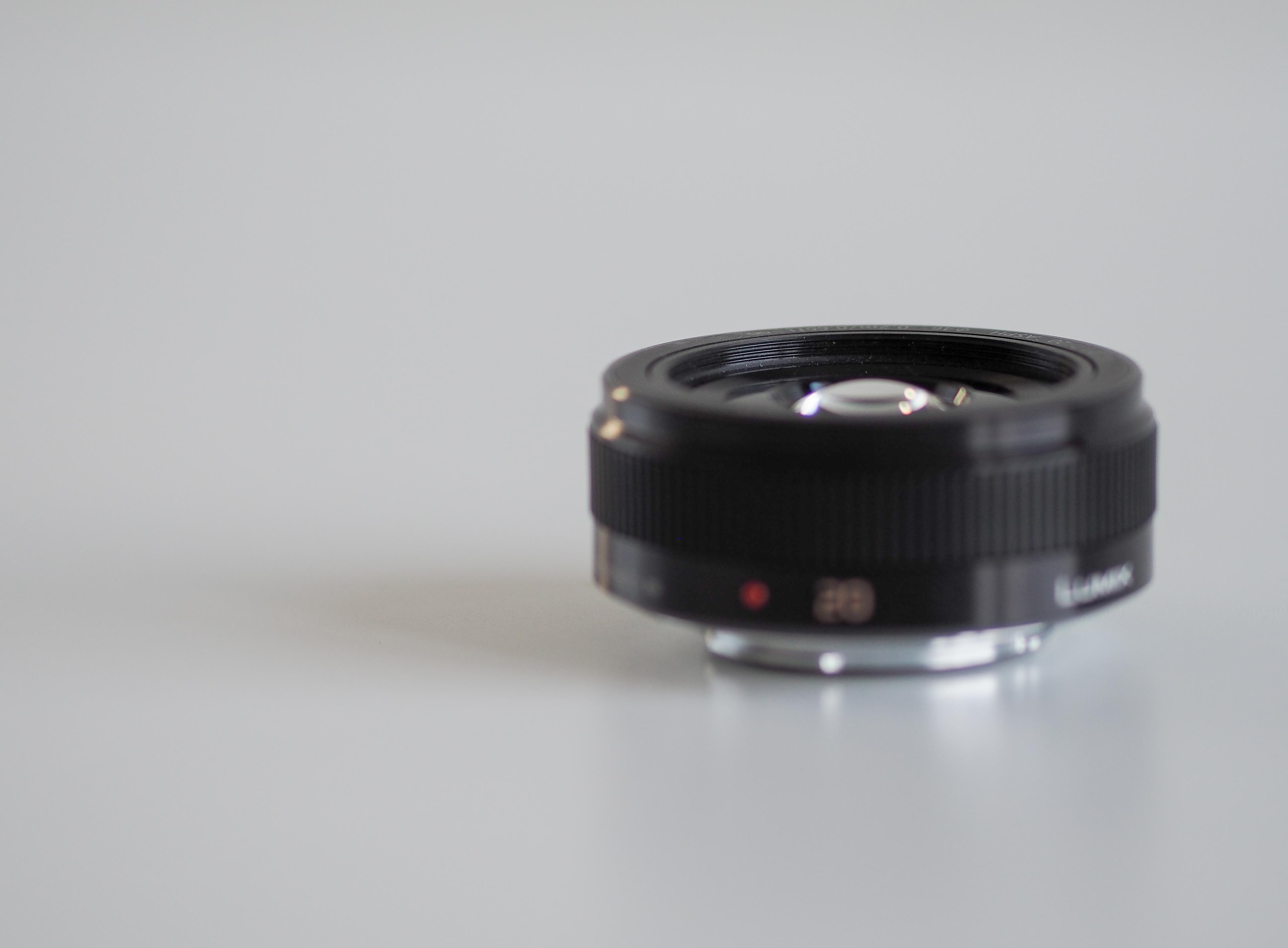 The Panasonic Lumix 20mm comes with a 46mm filter size if you care to attach circular polarizers or graduated neutral density filters to the front element. Considering the 20mm’s natural focal length, using this lens to shoot landscapes will quickly become the norm. Having the ability to attach filters to the front element is not only nice to have, it may become a necessity as you travel through the photography journey.

There has been some talk regarding the Lumix 20mm’s autofocus capabilities and most of that talk is not misplaced. However, when comparing to the baseline kit lenses that come with the E-M10 or other Micro 4/3 camera bodies, the Lumix 20mm still rocks. 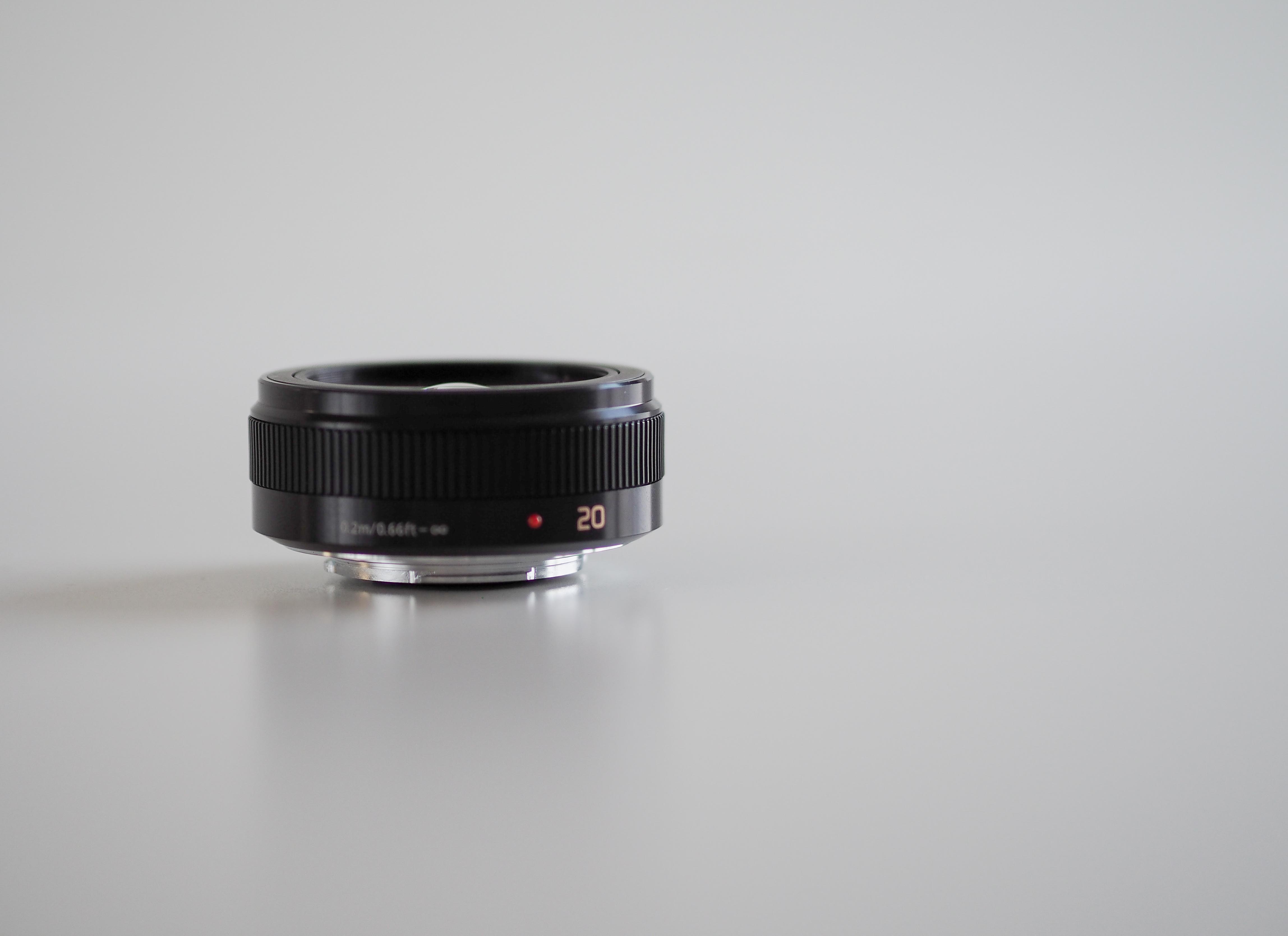 The autofocus system is quiet and fairly smooth. I have noticed the aperture blades click to find a healthy aperture in Aperture-Priority shooting mode, but this only happens in awkward lighting situations. 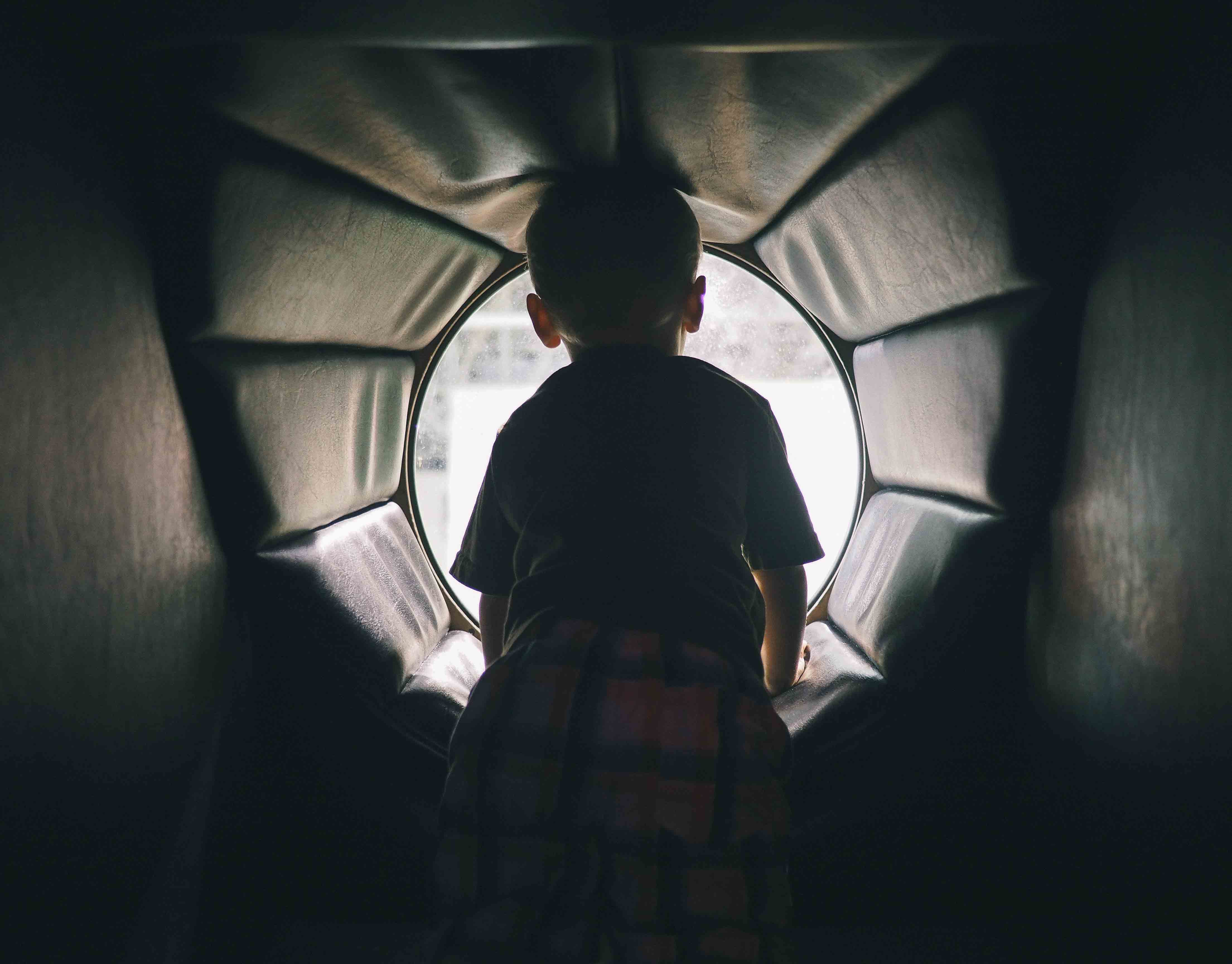 I wouldn’t say the lens’ focus system is slow per se; I would instead say that it’s not as fast as some higher quality lenses. When compared to the Olympus 75mm f/1.8, indeed the autofocus would be considered “slow”. However, when put up against the 14-42mm f/3.5-5.6 kit lens, the Lumix lens is snappier than most people give it credit for. 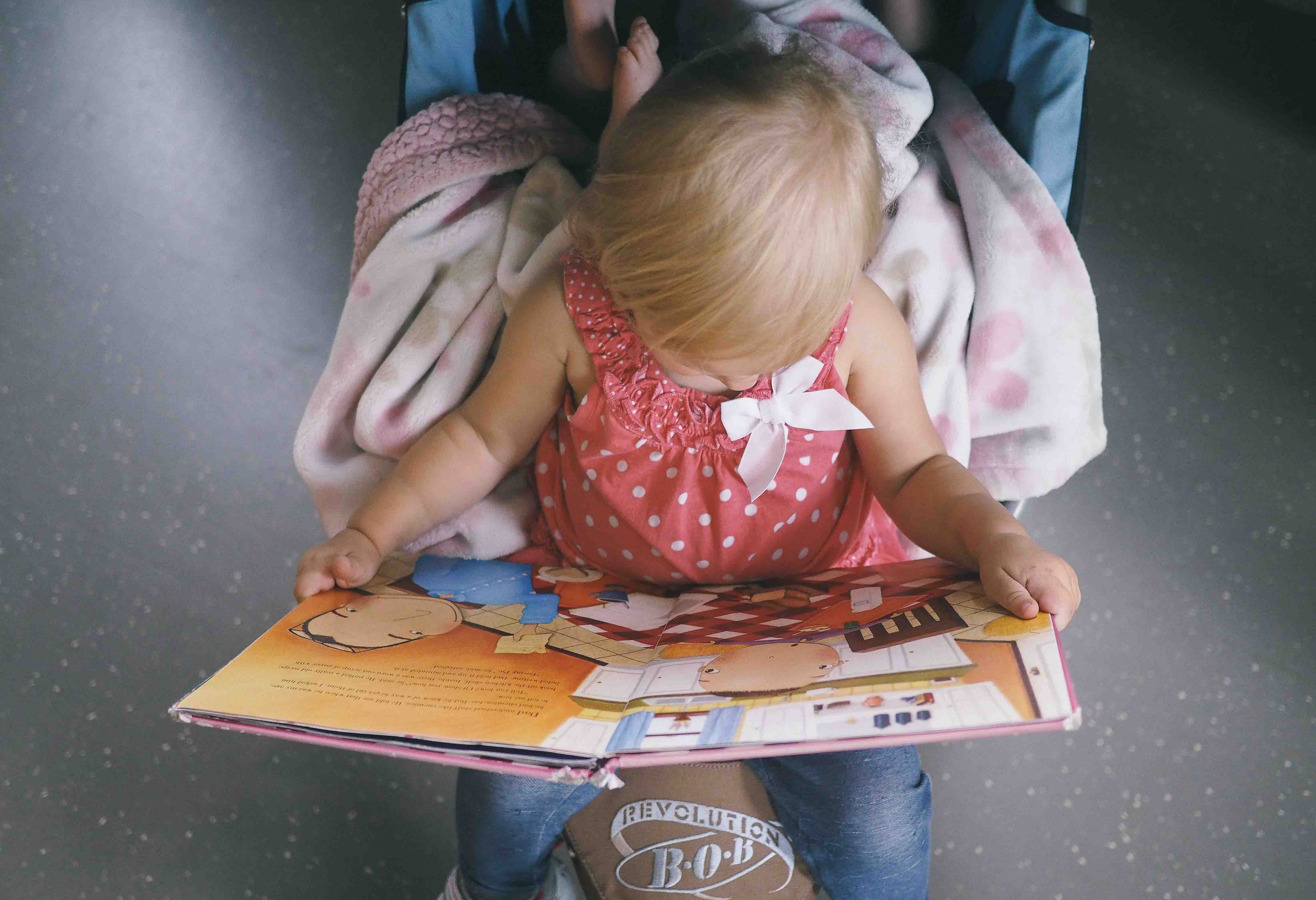 The opinions surrounding the Lumix 20mm’s autofocus abilities, I feel, are a bit misplaced in this day and age. For its price and utility, the 20mm pancake lens can’t be expected to focus as fast as Olympus’ Pro zooms or top-end primes. This pancake lens was designed to be a perfect starter prime and, to that end, its autofocus speed is right where it needs to be.

This is where all the meta jargon can be cast aside and the real story comes to play. The 20mm lens is the single lens I credit for teaching me how to shoot more mature photographs. “More mature” can mean many things. To me, properly composed photographs are the key to telling a story and represent maturity in a photographer. 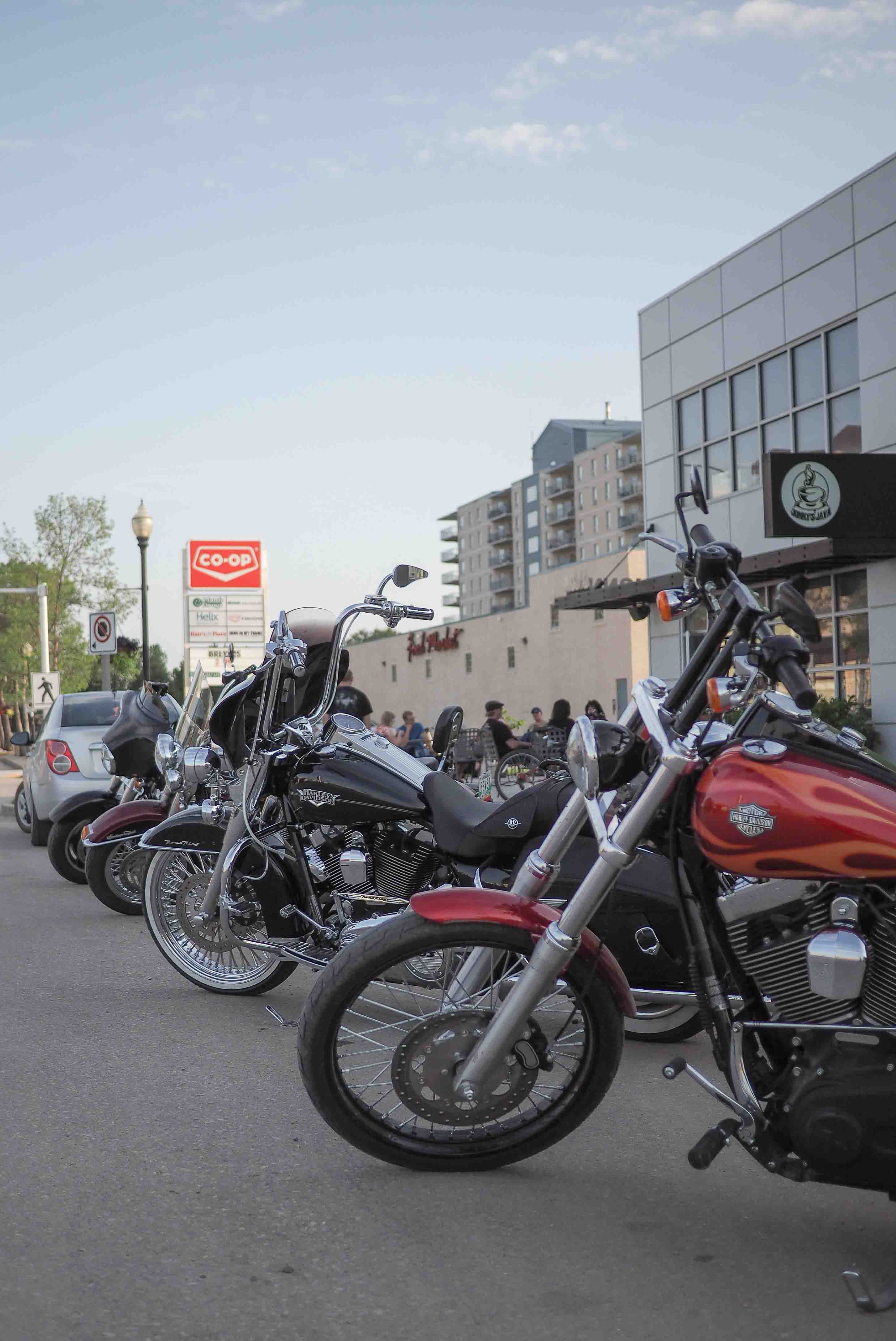 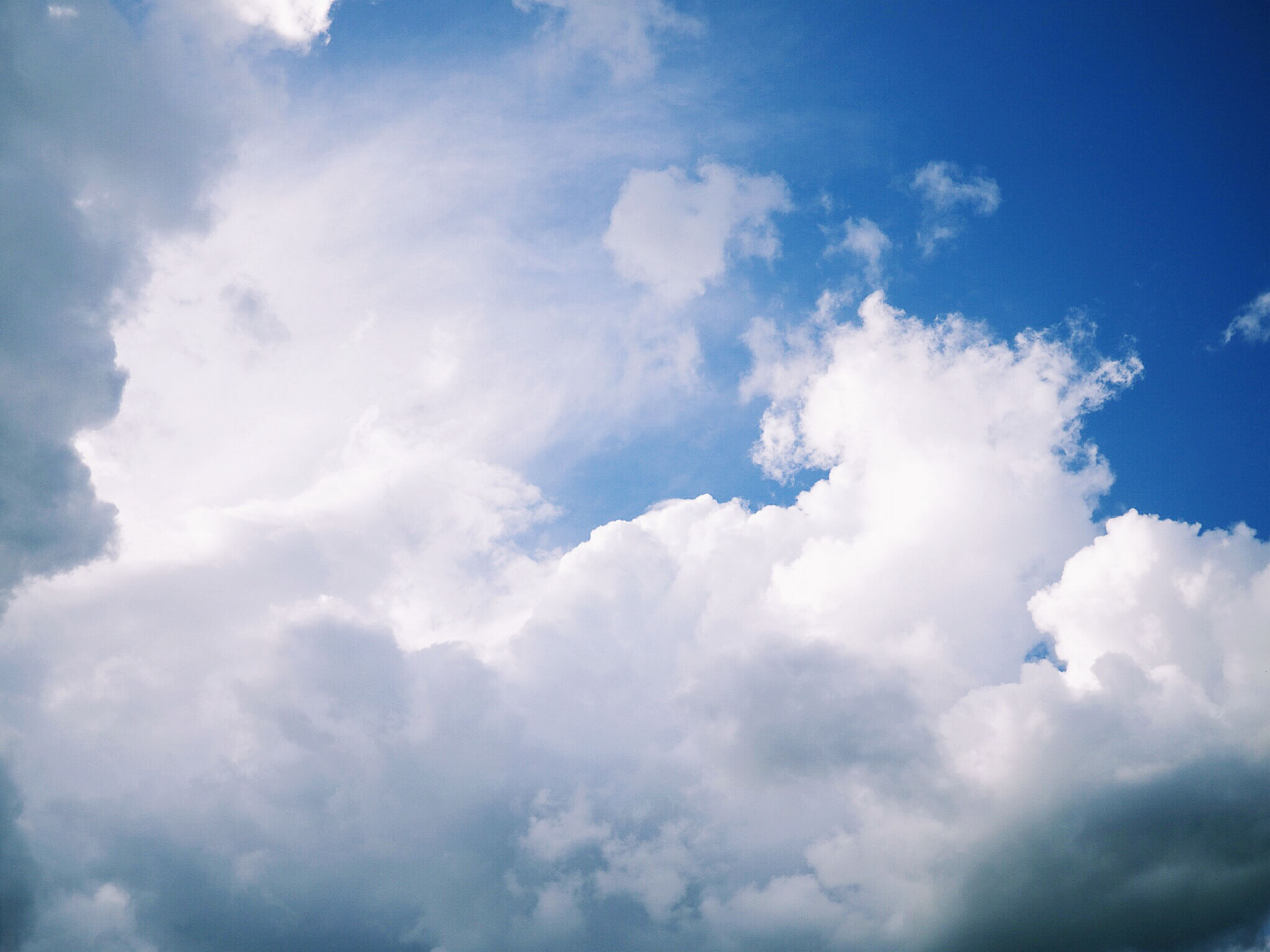 I once spoke extensively about photography with a local professional. He taught me that “only God himself could sit in the center of a photograph.” This is a hard rule to live by and often times this rule needs to be broken. However, general composition rules such as this are driven home when using a prime lens.

Manipulating the Rule of Thirds to suit your needs is a talent that needs to be refined and sharpened over time as well. A prime lens forces you to step backward or forward depending on the situation, and if you can’t move forward or backward any further, new composition may be in order. Finding a way to harness these photography rules with a prime lens can be humbling and enlightening at the same time. 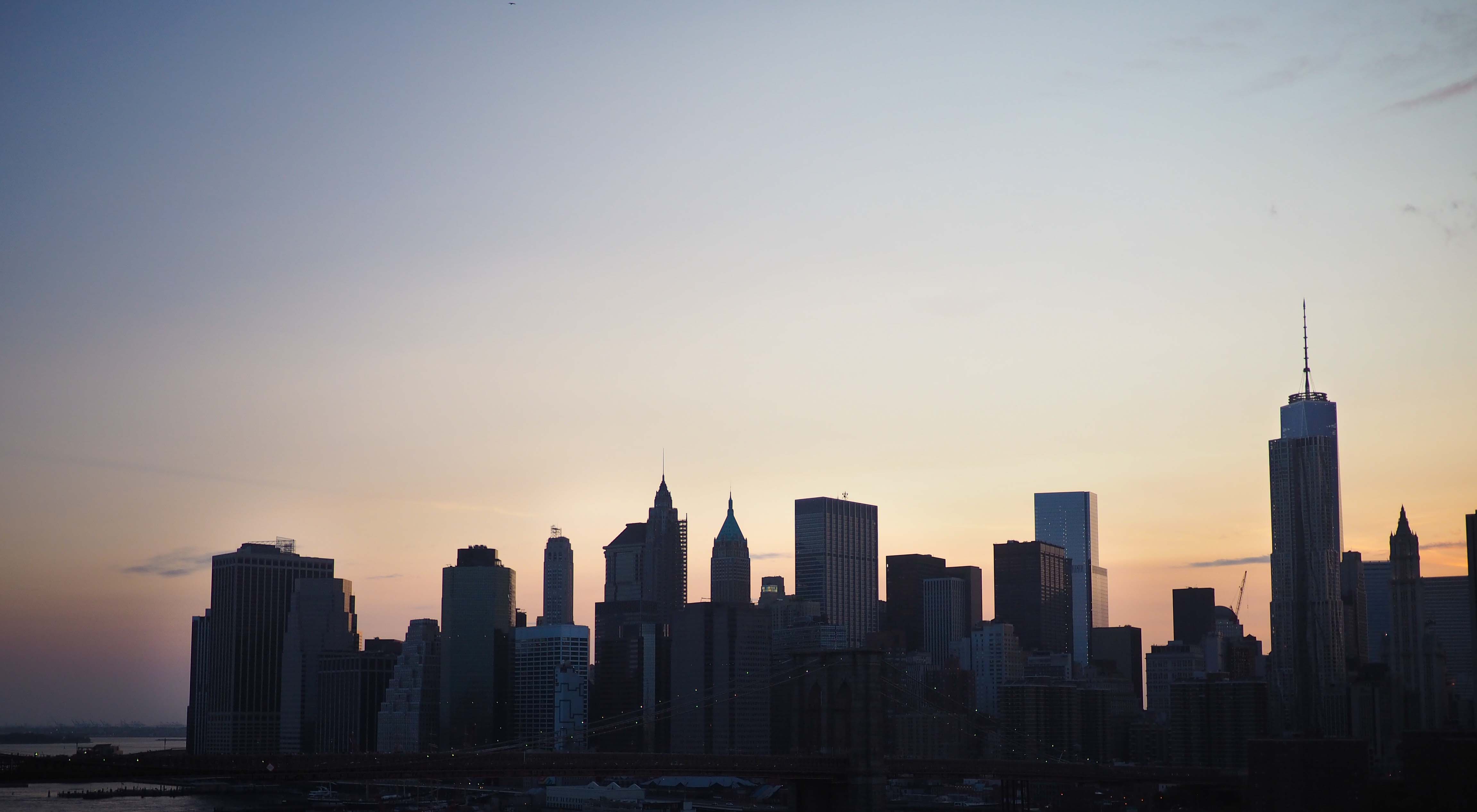 The Lumix 20mm pancake has provided me the opportunity to develop this composition maturity. It led me to step a bit closer to street scenes while in a bustling city, and it urged me to be patient enough for the vehicle to drive further away from a landscape.

Since the 20mm focal length is essentially the same length as I see with my own eyes, imagining an image in my head has become far more normal than I ever expected and I have found myself becoming less trigger happy with the shutter. Before firing, the Lumix pancake lens urges me to look, to consider, and to compose. In the same way film camera bodies urge patience and procedure, the 20mm pancake urges photographic qualities that aren’t developed with standard kit lenses. 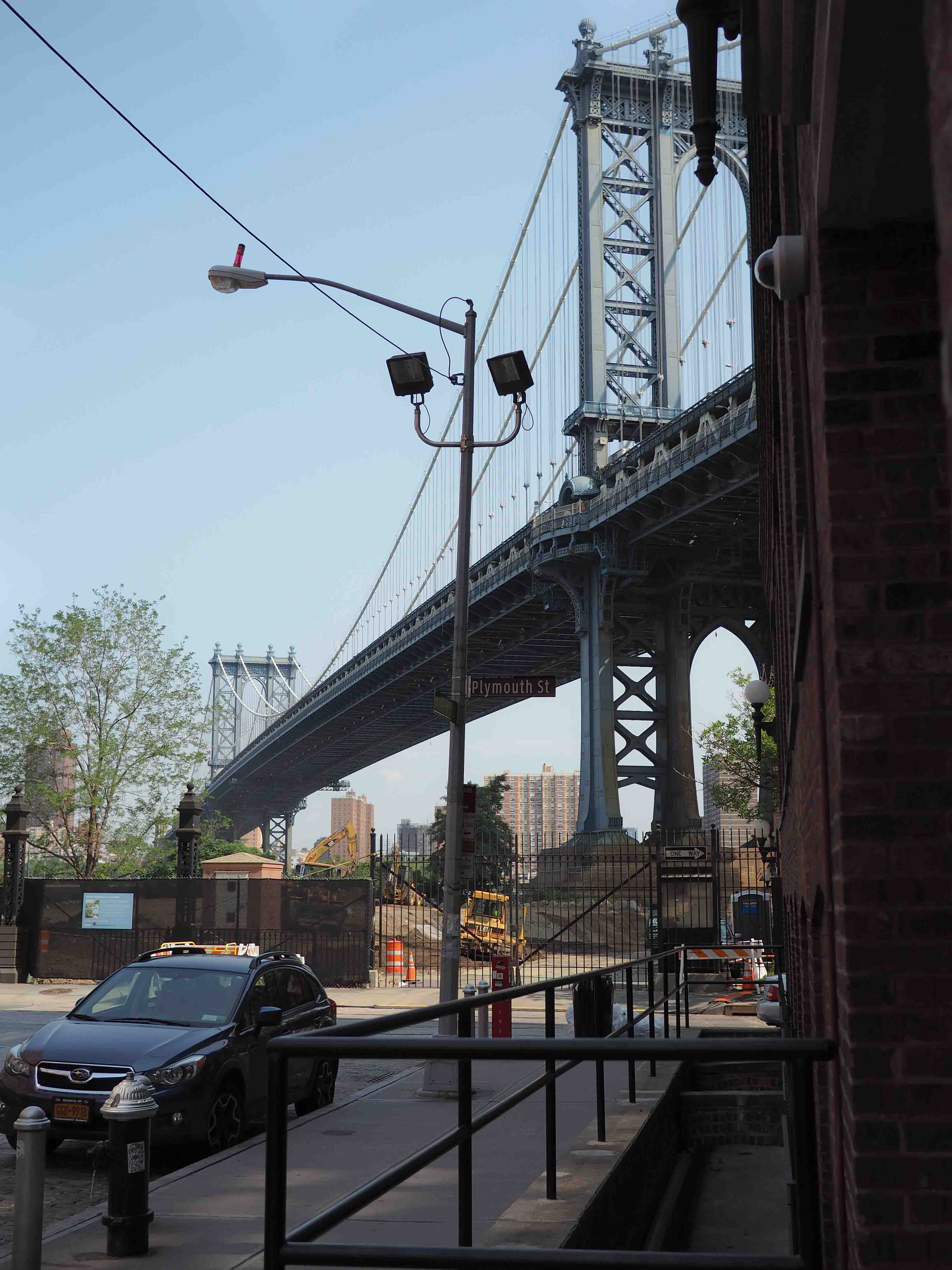 As always, the most important aspect of any piece of photography equipment is the quality of the image it produces. And seeing as almost every photography on this site has been shot with the 20mm lens, I would be remiss to say the lens doesn’t live up to standard. 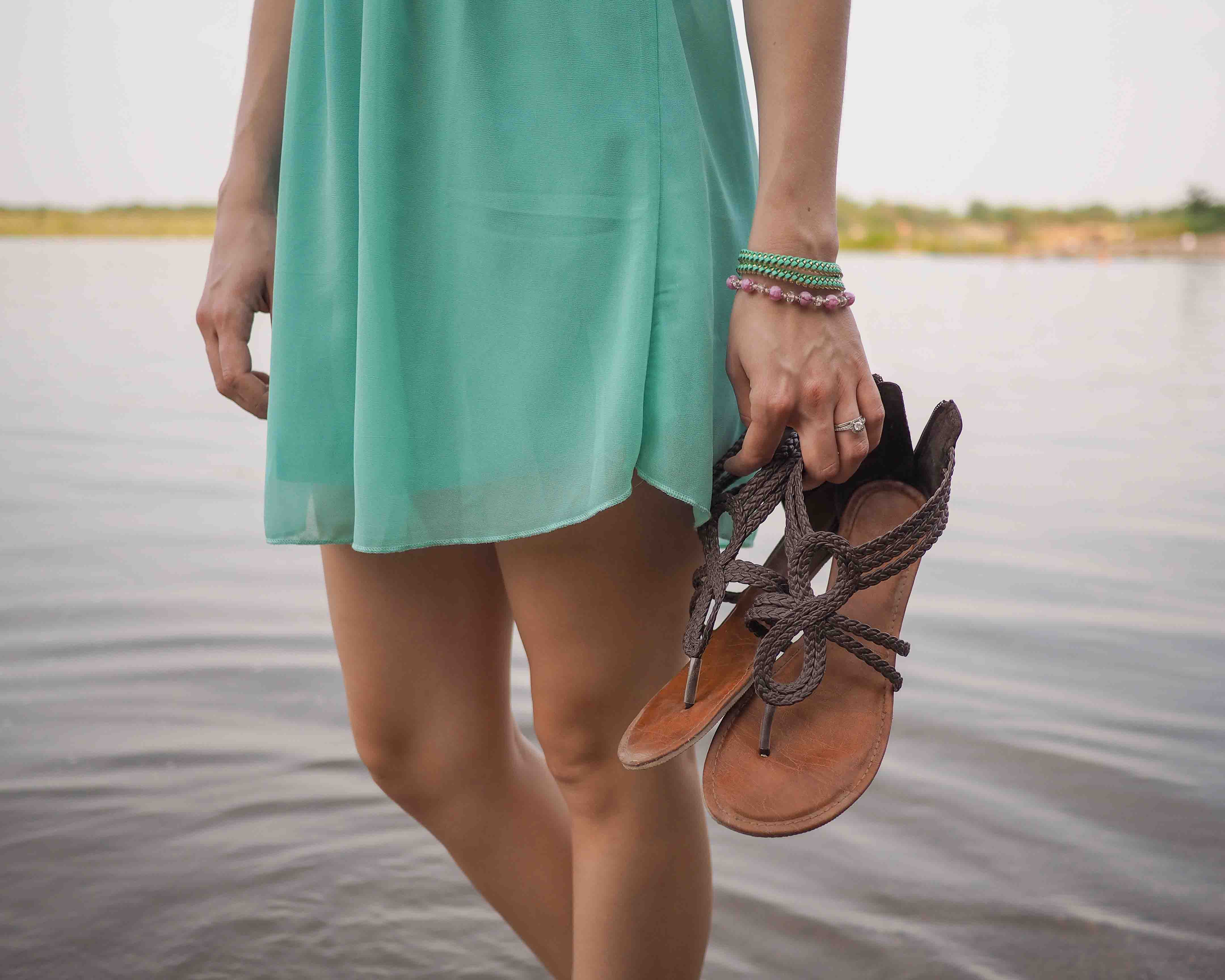 The only flaw in image quality I have noticed is its softness when shot wide open. At f/1.7, loads of light pours through the glass onto the sensor, but a smidge of sharpness is lost in the process. Stop the lens down to f/4.0 and the softness is completely eliminated. Stopping down for extra sharpness is often more worthwhile than creating the creamiest of creamy backgrounds. If you find yourself forgetting to change aperture settings as you shoot, hammer it into f/4.0 and shoot to your heart’s content. 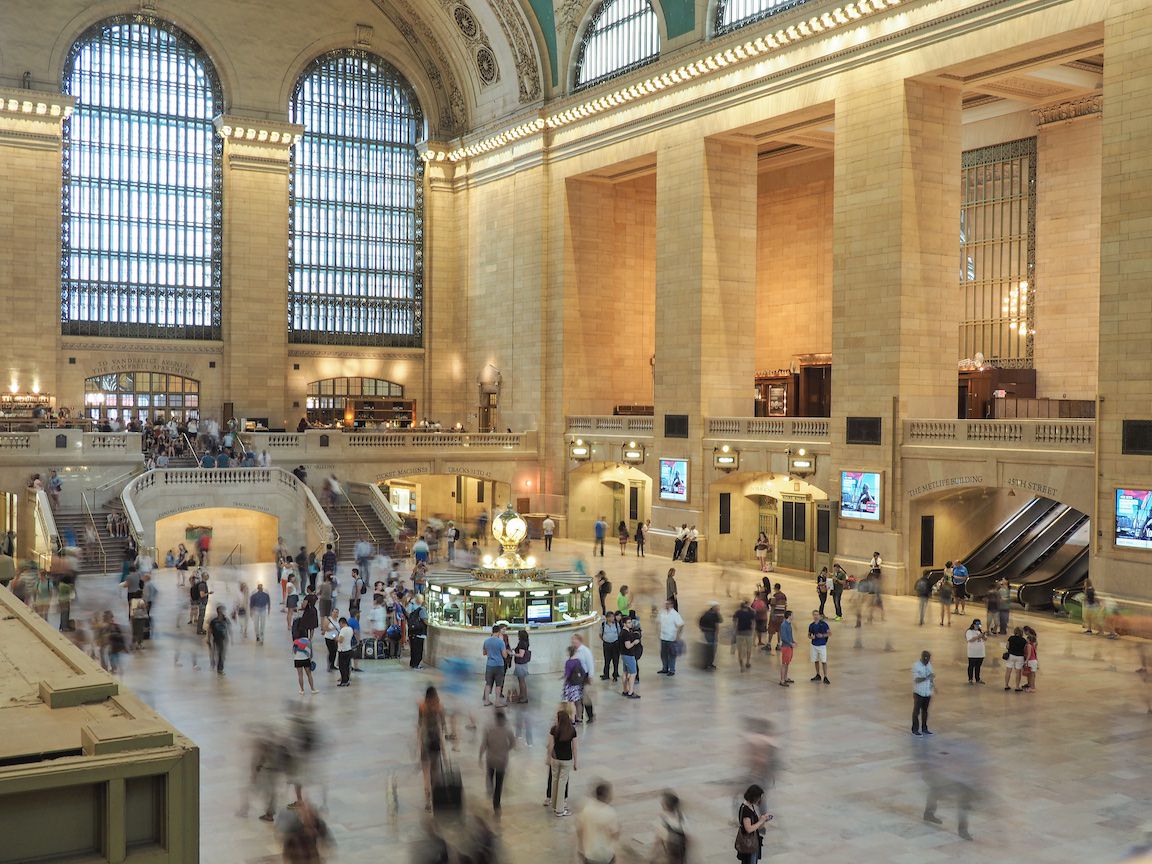 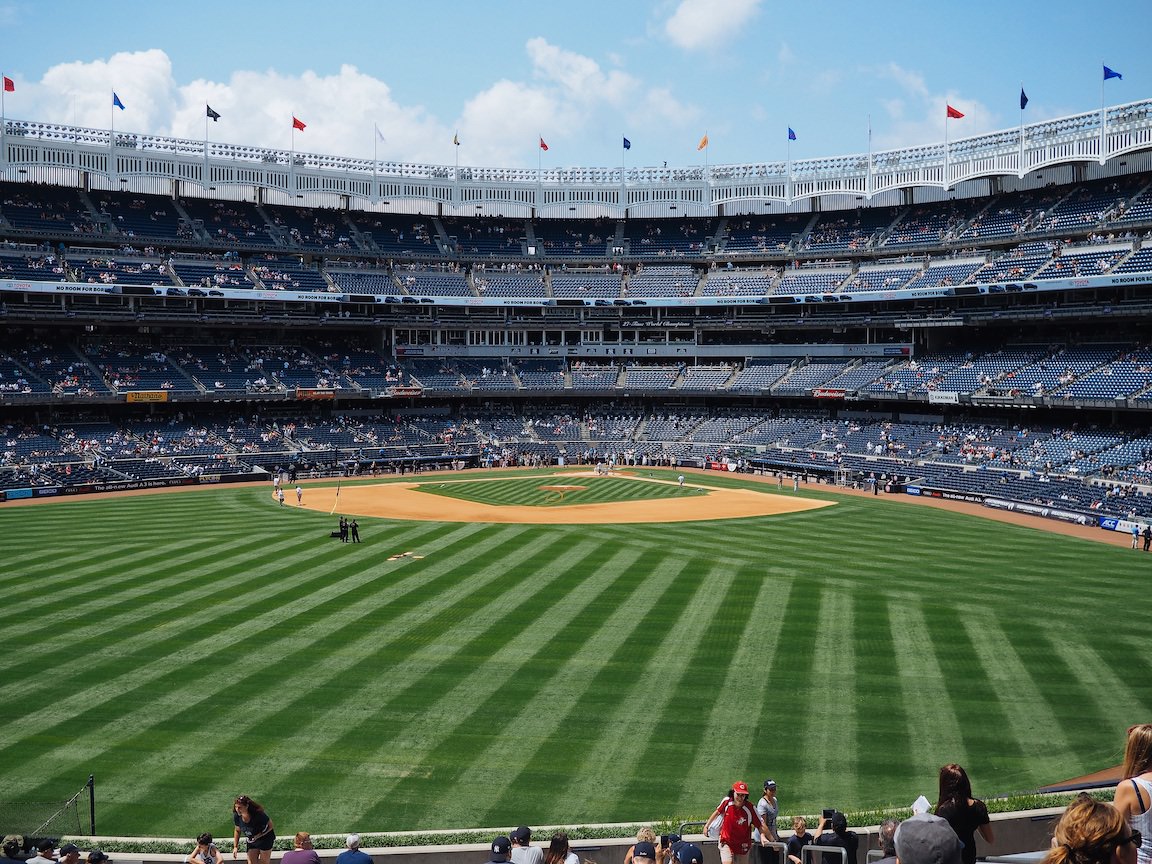 Other than that small flaw, the Lumix 20mm’s image quality is nothing short of stellar considering its price. In my albeit small comparison, I’ve found the Lumix 20mm shoots more neutral colours than the Olympus 75mm; images are less vibrant but more flexible with the 20mm pancake. 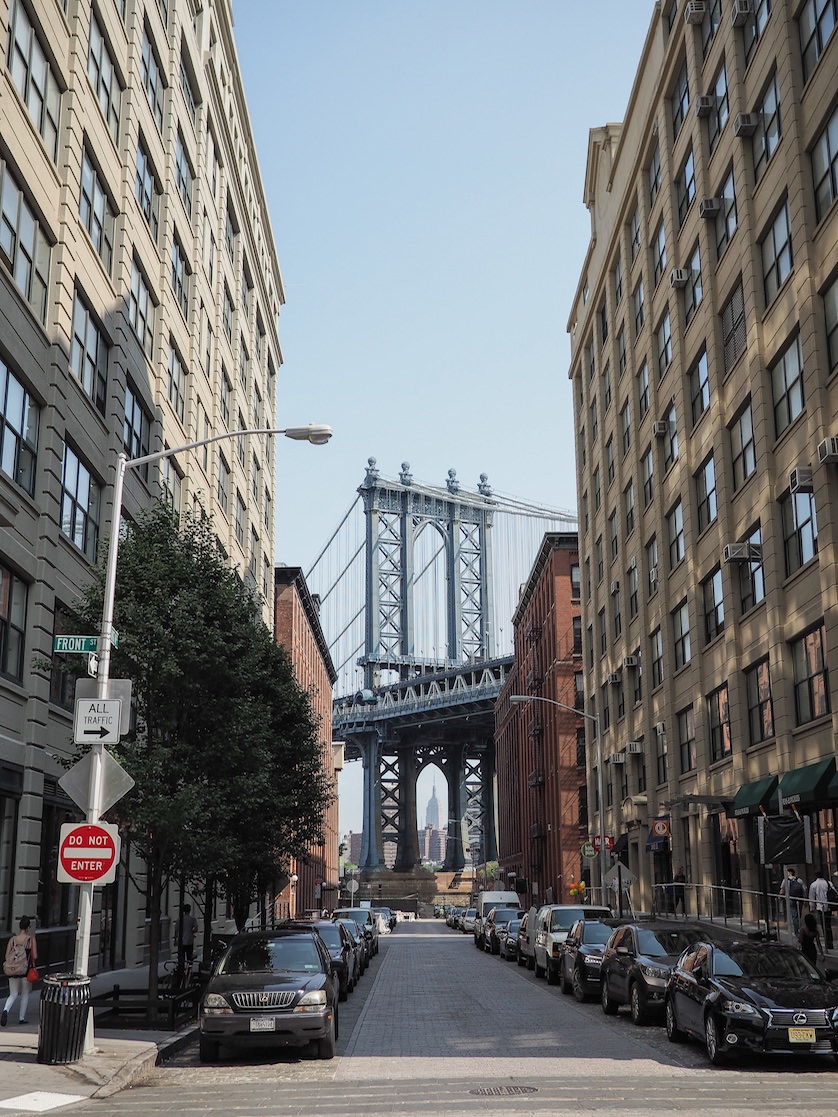 Background blur is decently creamy, but a bit hazy in comparison to Olympus’ top-of-the-line primes and the famous Panasonic Leica 42.5mm Noctitron. Once again though, the improved background blur provided by these top end lenses costs (in the case of the Pana/Leica) almost $1200 more. For the price, the Lumix 20mm creates incredible subject isolation with great bokeh in many situations.

I’ve hinted greatly at the quality of the Panasonic Lumix 20mm in comparison to its price. I’m not here to say the Lumix 20mm is the best lens you can buy for the Micro 4/3 system, period. What I’m saying is that you can’t buy a lens today that will teach you how to shoot better photographs for less of a price. I believe the 20mm pancake is the single, most valuable Micro 4/3 lens on the market. 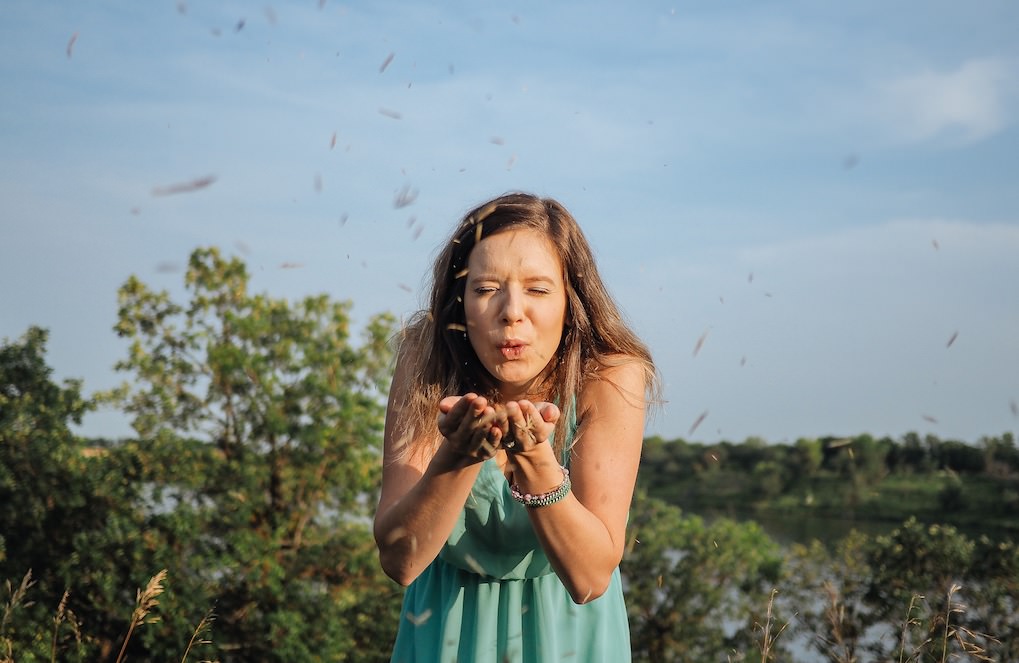 The Lumix lens offers a metal body, a fast aperture, and beautiful image quality all in the the tiniest of packages. You may not even notice the lens is mounted to your camera. 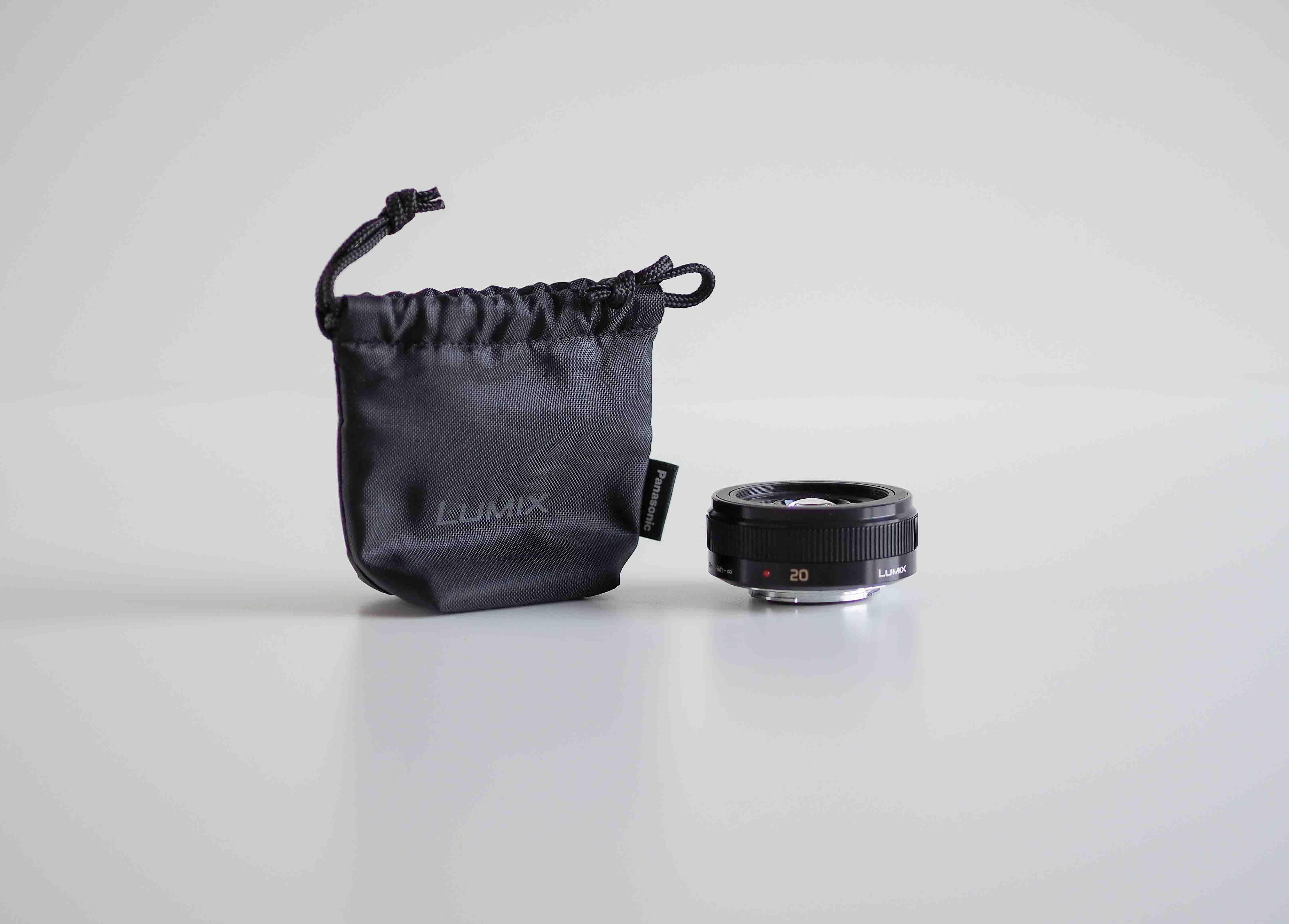 And putting specifications aside doesn’t really change the story of this lens. The 20mm will teach specific aspects of photography that most zoom and kit lenses are incapable of teaching. It has taught me patience, recognition, composition, and simplicity in photography. I’m not an expert, but I’m sure these qualities are only good qualities.

Will the 20mm pancake be in my collection forever? Probably not. I view this lens like a ninth grade teacher: The subject is capable of teaching you fundamental skills, but may peak in its lesson-giving at some point in time. However, upon return after years away, that teacher can still remind you of the basic skills and drive home something new entirely. 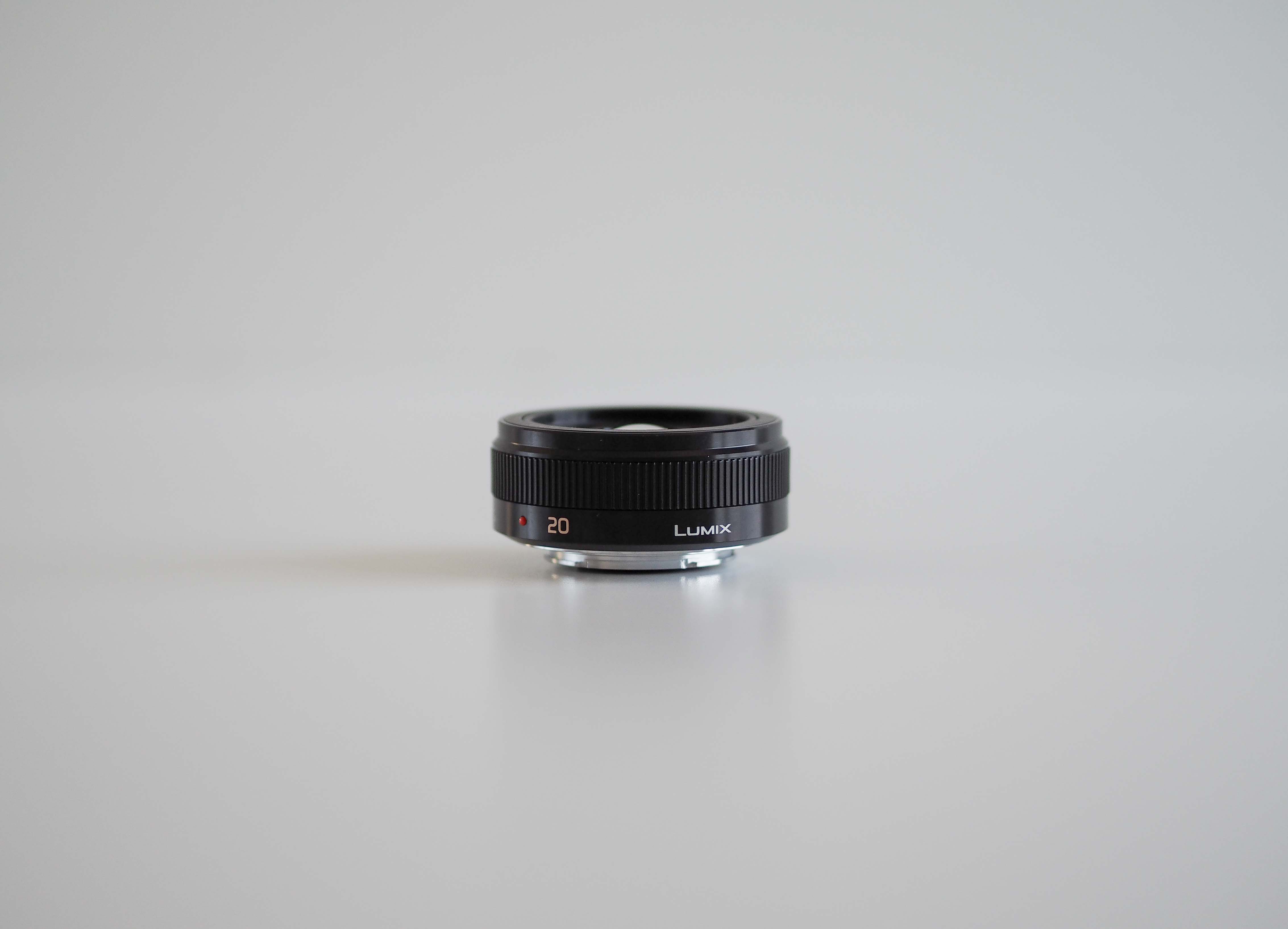 That’s the Lumix 20mm lens in a nutshell. It’s the most important lens every Micro 4/3 owner should buy and it’s the best prime lens you can purchase at the start of your budding photography career. It may not always be your go-to lens, but it is a magnificent starting point for an incredibly great price.