Anybody else feel like January was a long month? Maybe it’s the winter blues, but I feel like it’s been forever since I showcased these homescreens. 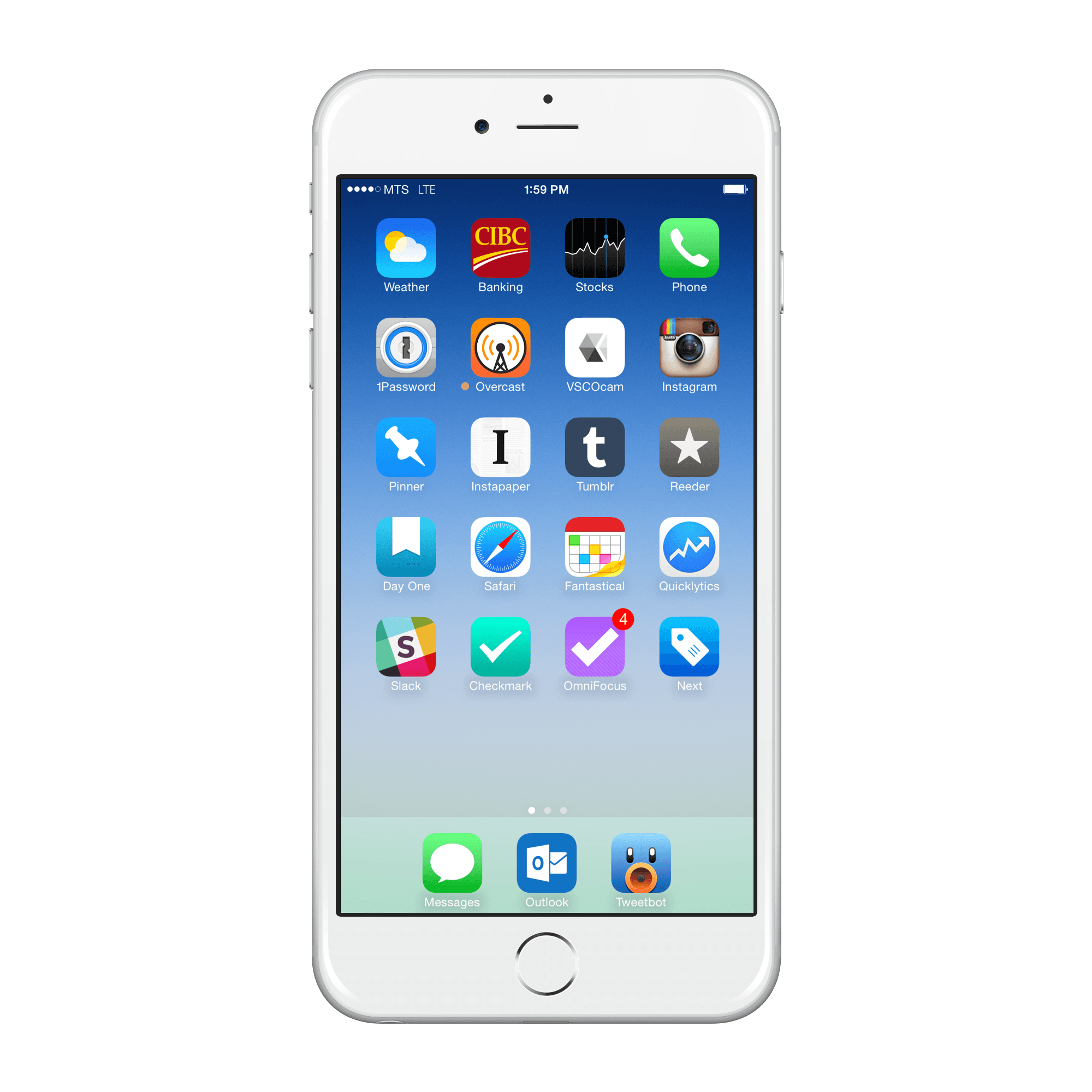 I worked hard this month to simplify things. I don’t use Microsoft Excel on the iPhone as much as the iPad, so Excel has been fitted to my second homescreen. Also gone are Octopage and Music.app. Again, I became tired of these apps clogging my homescreen.

Most notably absent are Vesper and Drafts. I still think Vesper is the most beautiful notetaking app on the market, and I’m still very curious about the workflow Vesper for Mac will introduce. However, for the time being, my main use for Vesper has been replicated by Checkmark 2, so I’ll put Vesper on the sideline until the time comes to call an audible.

And Drafts? It’s a great app, but I just don’t have any use for it on the iPhone.

It may be odd to say Checkmark 2 replaces Vesper on my homescreen. Vesper became a home for all my running lists as time passed by, so when I redownloaded Checkmark 2 for fun, I realized I could eliminate Vesper and pick up an app that handled my lists and my random daily to-dos.

Checkmark 2 is a brilliant app and I’m enamoured by its design. I have a bunch of projects on the go right now, so project management and major recurring tasks find a place in Omnifocus, while my daily to-dos and random reminders find a home in Checkmark 2. Overall, I like the workflow and I’m interested to see if it sticks for the foreseeable future.

Lastly, I’ve been floored by Microsoft Outlook. It’s the email client I’ve always yearned for and I’m disappointed to learn that it’s been within reach this entire time. I now house all my email accounts in one single app. That app takes the best of Mailbox (swiping, scheduling) and the best of Mail.app to create the single best email client for me on the iPhone. Lots of people swear by Dispatch, but I never appreciated Dispatch’s design or its lack of push notifications. Outlook is the perfect email app and I’ve literally been checking my email for the sake of using the app. 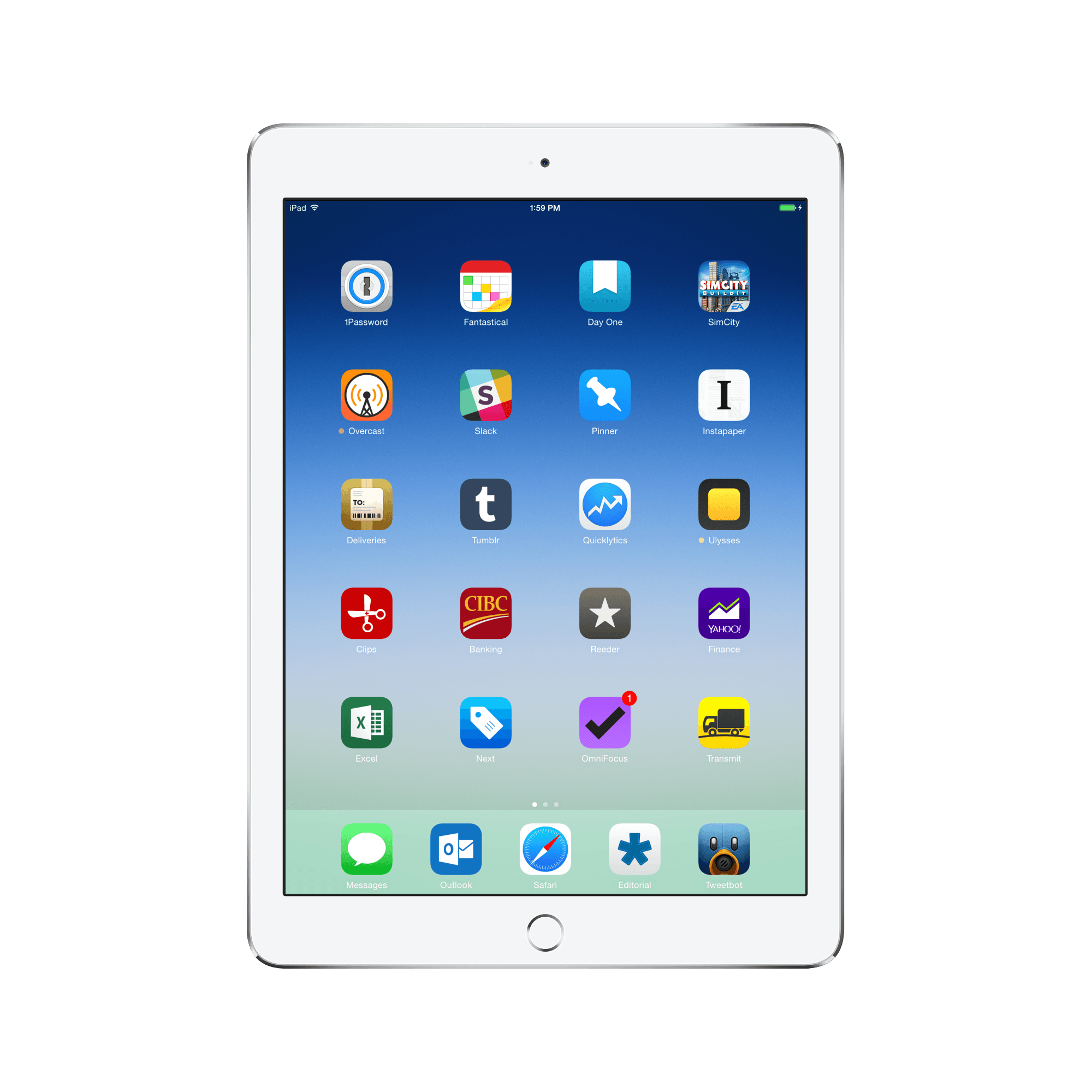 Almost nothing has changed on the iPad this month save for the removal of Drafts and the addition of Outlook.1

As an addition to my schpeel about Outlook above, I think Outlook is best on the iPad.

Foremost, I am in love with the “Files” tab. I deal with hundreds of email attachments every week and this is the most painless way I have found to deal with the multitude of attachments.

I have absolutely no use for the built-in calendar in Outlook, as it appears to be a blatant rip off of Fantastical 2. I’ve been testing a new calendar app that may have both Fantastical 2 and Outlook beat, so we’ll see where that goes in the next little while.

Lastly, Ben Brooks has mentioned a few times that the deal breaker for Outlook in his book is the fact that Outlook routes your mail through their own servers to handle email scheduling and other features. Ben is entirely correct in pointing out this security flaw and some people may want to keep this in mind. I, however, have had Mailbox running on every device I own in the background because I really like Mailbox’s auto-swiping features. As a result, since my email is already routed through Mailbox’s servers, I would be a hypocrite to denounce Outlook’s process. I’ve already jumped off the security cliff, so I may as well make the best of the situation and use the best email app I can find.

All in all, that’s it for another month. I’m hoping this is the month that we will see Tweetbot 3 for the iPad. I won’t hold my breath, but it seems like a great time for a new Twitter client.