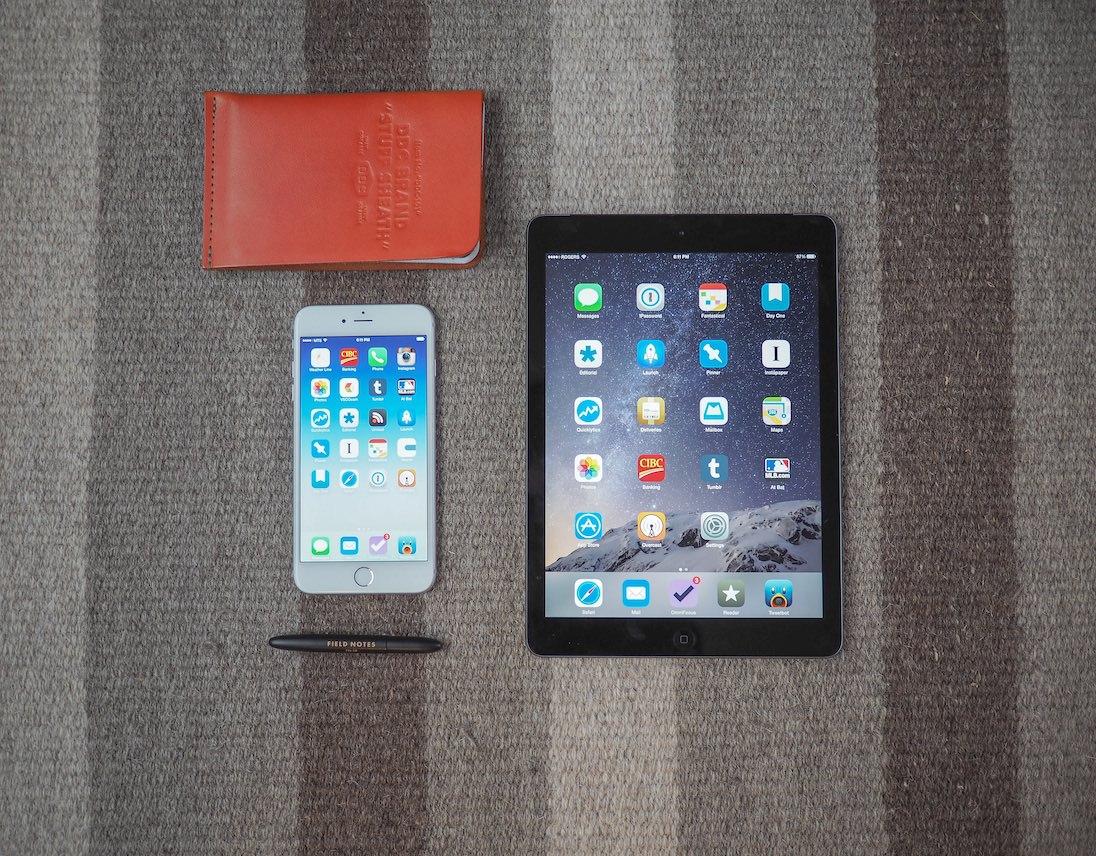 This homescreen article has easily been the one I’ve anticipated most since I started the mini-series back in April. I purchased an iPhone 5 back in September 2012 and, as with any older phone, it became stale and dry as time passed. Like many other people, I was really looking forward to the launch of the iPhone 6.

September 9th came along and I never thought I would consider the extra big iPhone.

Yet here I am, after humming and hawing on both sides of the iPhones 6 fence, holding an iPhone 6 Plus in my hand.

And I love it.

First up though, my iPad’s current homescreen — which has sat hopelessly unused for the last four or five days: 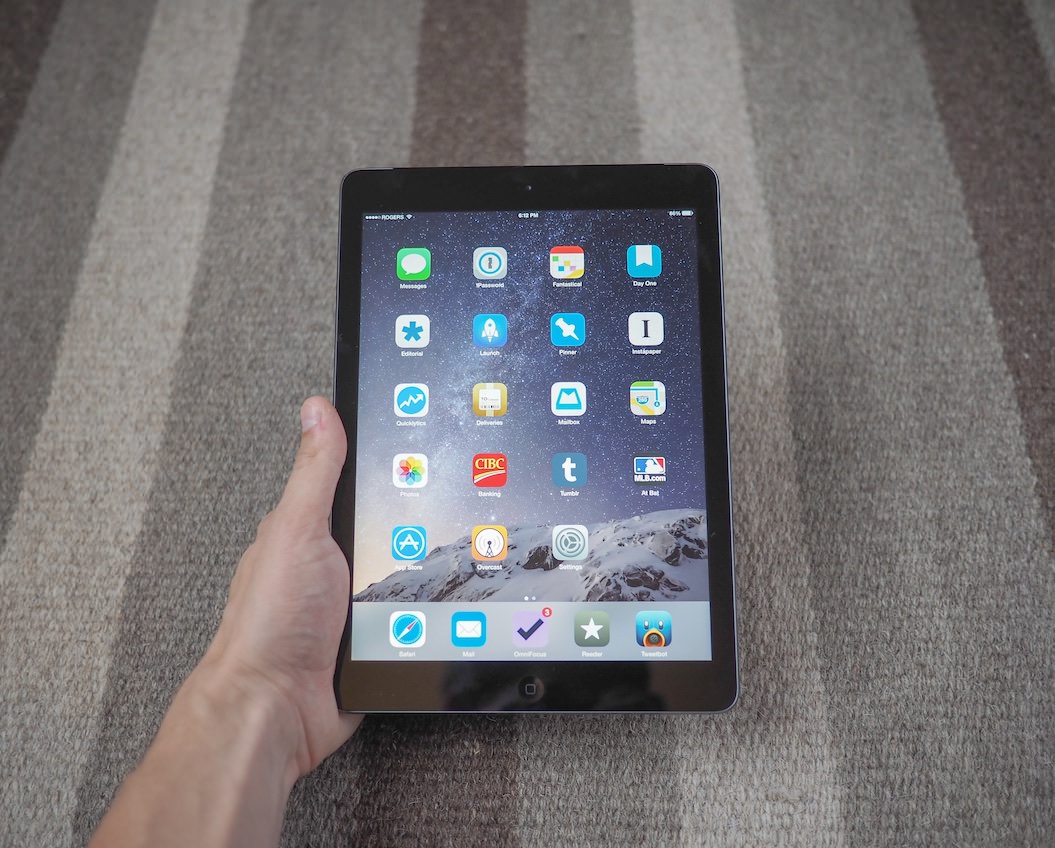 September was the first month I showcased my iPad and I finished off the month clamouring for three app updates to hit the market. I went one for three.

Gone are Chronicle and Retro for Instagram. I originally loved the idea of keeping track of bill payments in a dedicated bill payment app, but the app didn’t fit into my bill payment plan of attack. And I think Instagram should stay on the iPhone where the images don’t get scaled to unnatural sizes.[1]

I’ve switched back to using Instapaper as a read-it-later service instead of saving everything to Pinboard. After reading an article I saved in Instapaper, I send my favourites over to Pinboard and archive the rest. This makes my Pinboard an exclusive listing of my favourite writing on the Internet.

And with the iOS 8 update, reading my Pinboard list has switched over to the recently-popular Pinner app. Pinner for Pinboard has some excellent iOS 8 integration and I love the simplicity of saving a link to Pinner from anywhere there is a sharesheet. The app looks great with its Avenir font and its wonderfully executed “Optimised” view. I never thought I would drop Pushpin, but Pinner has definitely introduced an extra level of power in iOS 8.

But by far the most important addition to my iPad is Omnifocus 2. Omnifocus became my GTD app of choice when I jumped on the iPhone version. My schedule has become extraordinarily busy as of late and Omnifocus has brought some sort of sanity to my life. Adding it on the iPad has only rounded out an almost perfect trio of apps.

The last important change on my iPad is the switch from Mailbox to Apple Mail. I really like the swiping additions in Apple Mail and nothing beats having every single email address talk to one single inbox. It’s far easier to manage email when all the crap flows into one spot. I keep Mailbox around for deferring emails into the future or for archiving if an email address doesn’t have the ability to archive. Other than that, Apple Mail on the iPad and iPhone has really impressed me as of late. 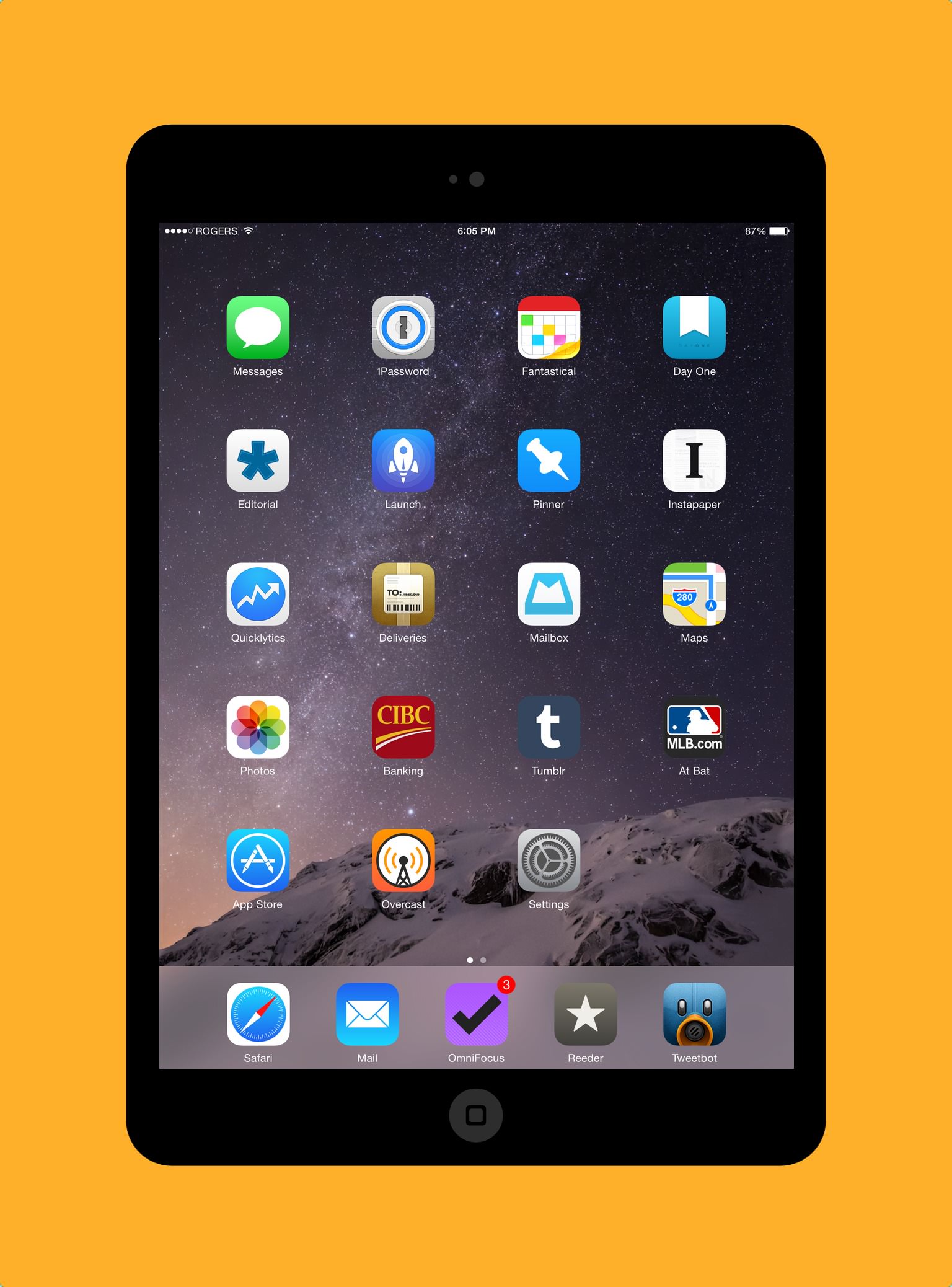 Obviously the biggest change of the month came in the form of an entirely new phone and an extra row of app icons. Naturally, the last row has remained empty. Take a look: 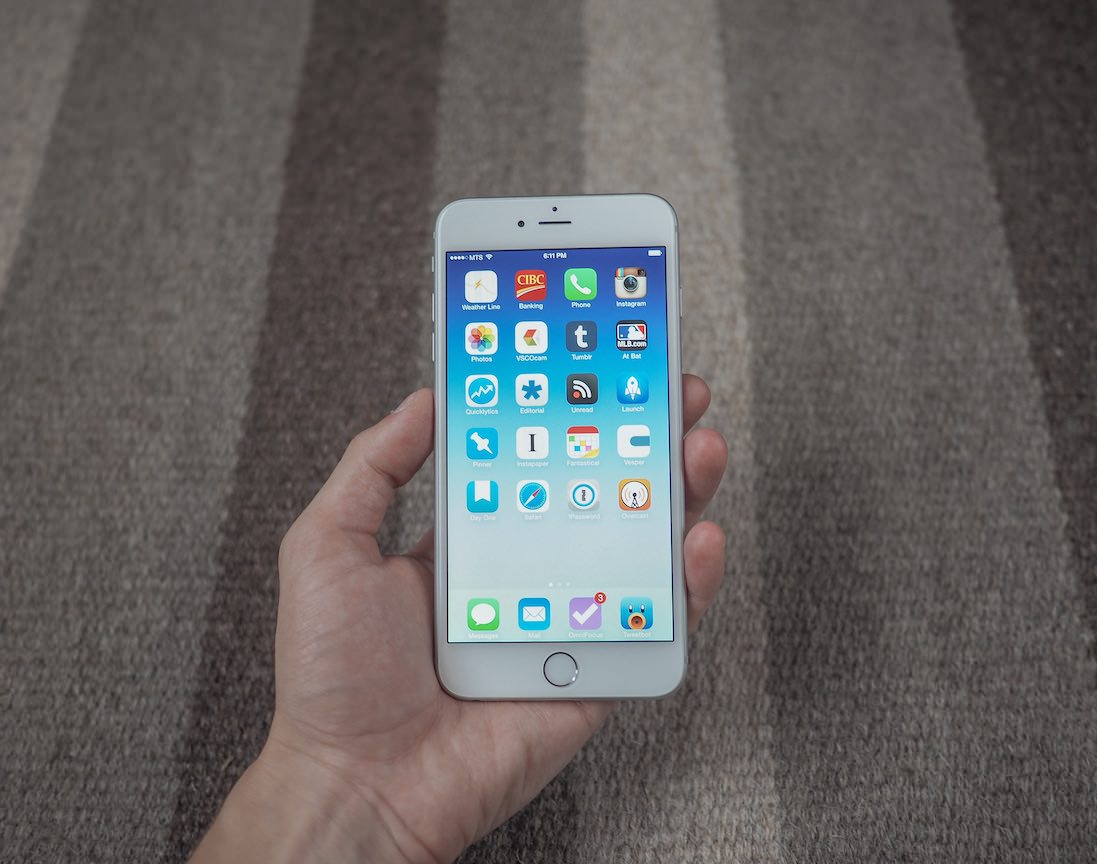 This can’t be said about iPhone 5/5S apps on the iPhone 6 Plus; text is extremely blurry and unoptimized keyboards are horrid to use and look at.

At the end of the day, I’ve quickly grown tired of unoptimized apps and this has led to far more experimentation than I would have ever expected (or even wanted). 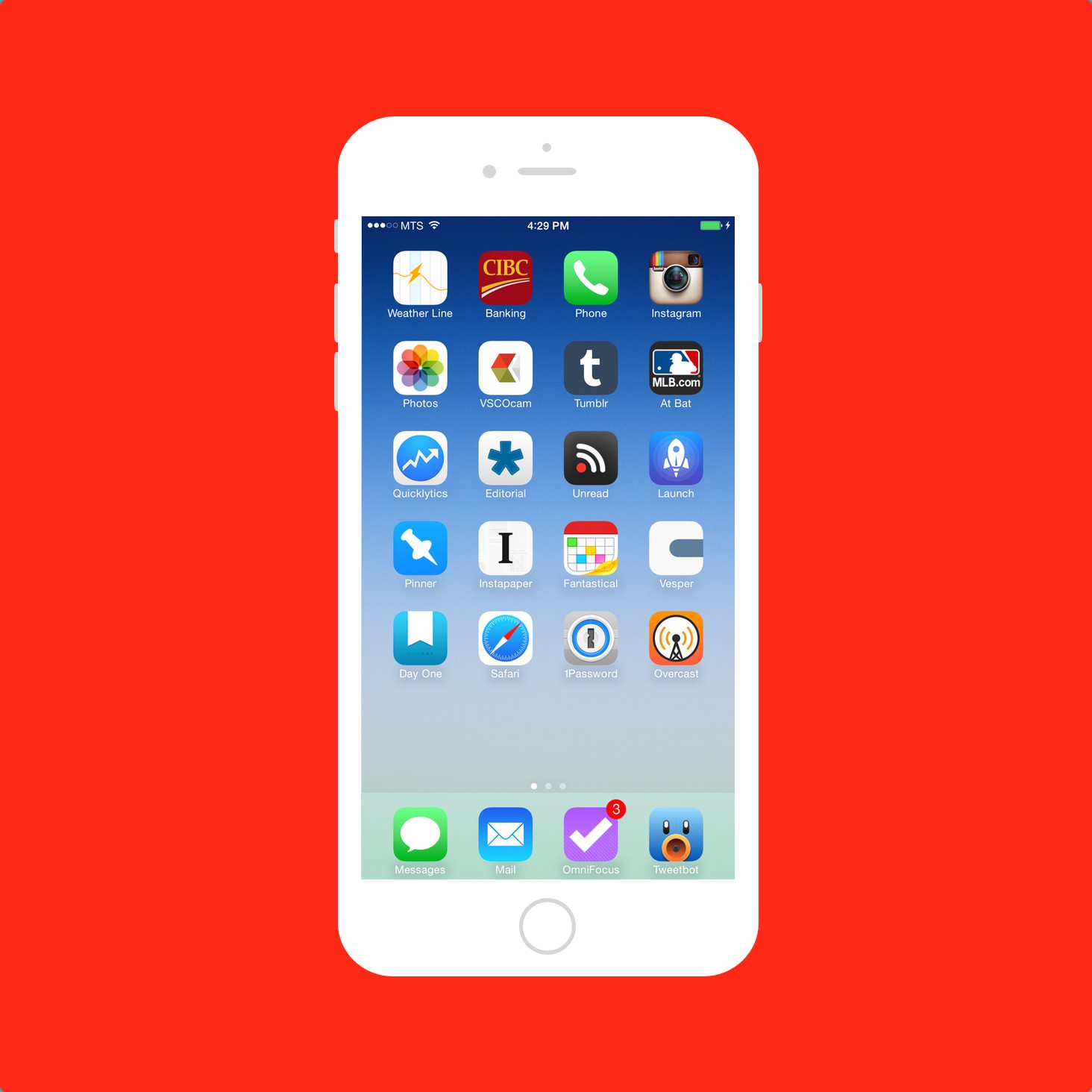 Of the 24 apps on my homescreen, 12 are not optimized for the iPhone 6 Plus. These are the lucky 12 that have remained, I might add, as apps like Reeder 2, Delivery Status Touch, and Pushpin have all been cast aside for updated apps or apps that can be customized to reduce the blurriness.

Apps that have been optimized for the giant 6 Plus screen are glorious though.

Instapaper has become one of the most beautiful apps I’ve ever used on my iPhone and its iOS 8 sharesheet extension is second only to Pinner’s extension.

Vesper has moved outside my dock, but it is in the easiest spot for my right thumb to reach. Not only has Vesper become jawdropping on the 6 Plus screen, the improved typing experience makes it more useful than ever for taking notes in class or on the go.

I could go on regarding the sheer beauty of optimized apps, but I’ll leave that for an iPhone review in the future. I’ll also touch on the location of my most used apps in that review as well, as the size of the screen has changed how I access my iPhone. My iPhone has become a productivity machine overnight and it’s all thanks to that giant screen and the improved keyboard.

I’ll leave the homescreen article here for now. I don’t want to make too many comments that I end up retracting when I do an iPhone 6 Plus photoshoot in the future.

What I can say definitively at this time is that the iPhone 6 Plus has changed how I handle email, how I update my calendar and how I read and browse content. That’s basically everything I use an iPhone for.

I can’t wait to see more optimized apps hit my “Updates” section in the near future.