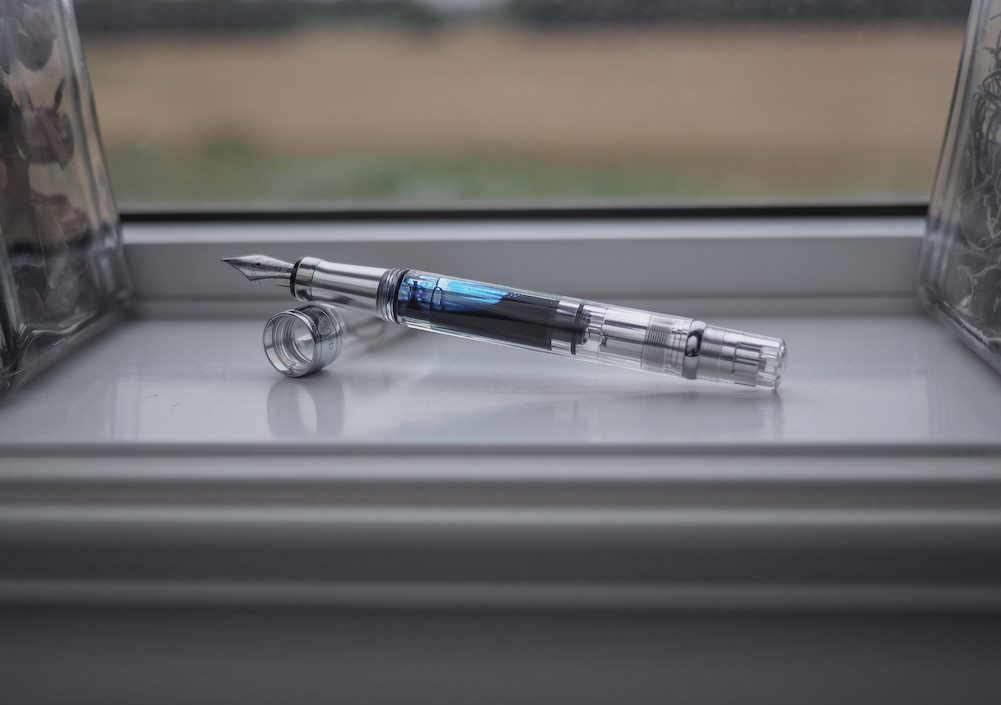 It’s been pointed out to me that fountain pens are one of the deepest, darkest rabbit holes you can venture into. Once you try a fountain pen there’s no going back.

I experienced this life-changing event about six weeks ago with the Lamy Safari. Ron at Pen Chalet sent a Safari for review and, unbeknownst to me, Ron opened my pocketbook to an endless black hole. 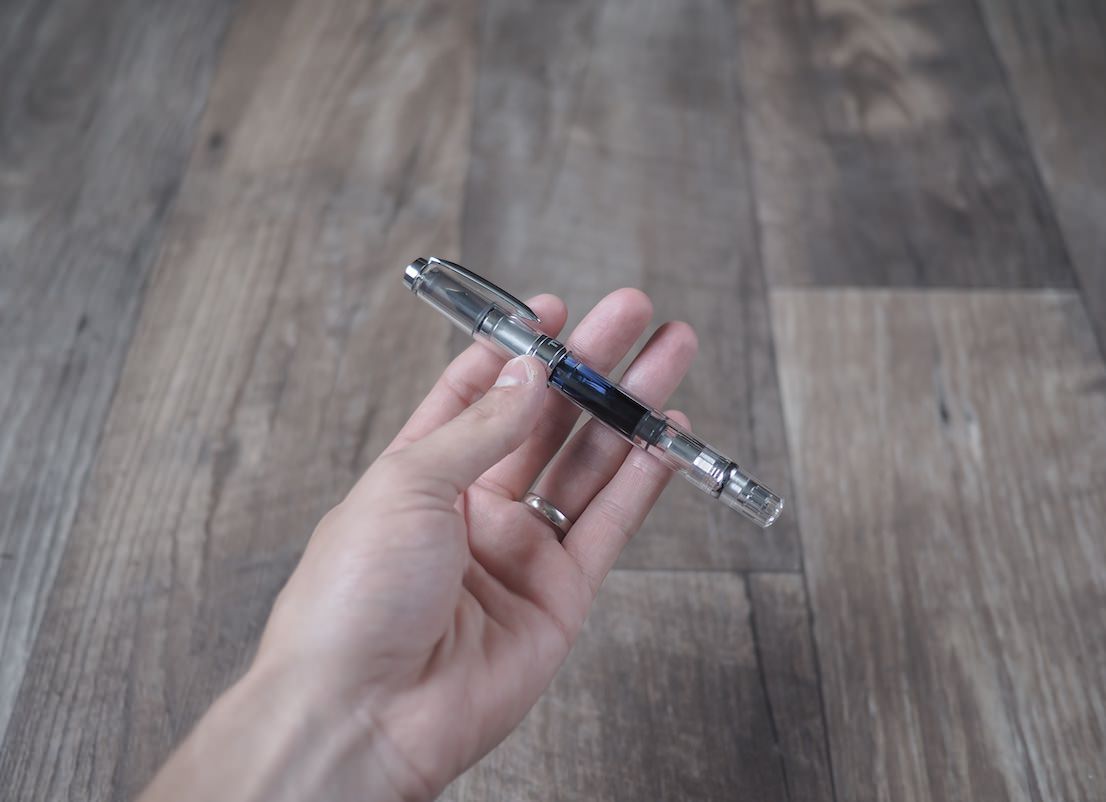 The TWSBI Diamond 580AL was an easy second purchase — its older, unmodified uncle is slated at the very top of the Pen Addict’s Top 5 Pens after all. The aluminum modifications made to the 580AL improve its durability and longevity.

Best of all, the aluminum 580AL is the coolest looking pen I’ve seen or touched to date. It’ll be my workhorse pen well into the future. 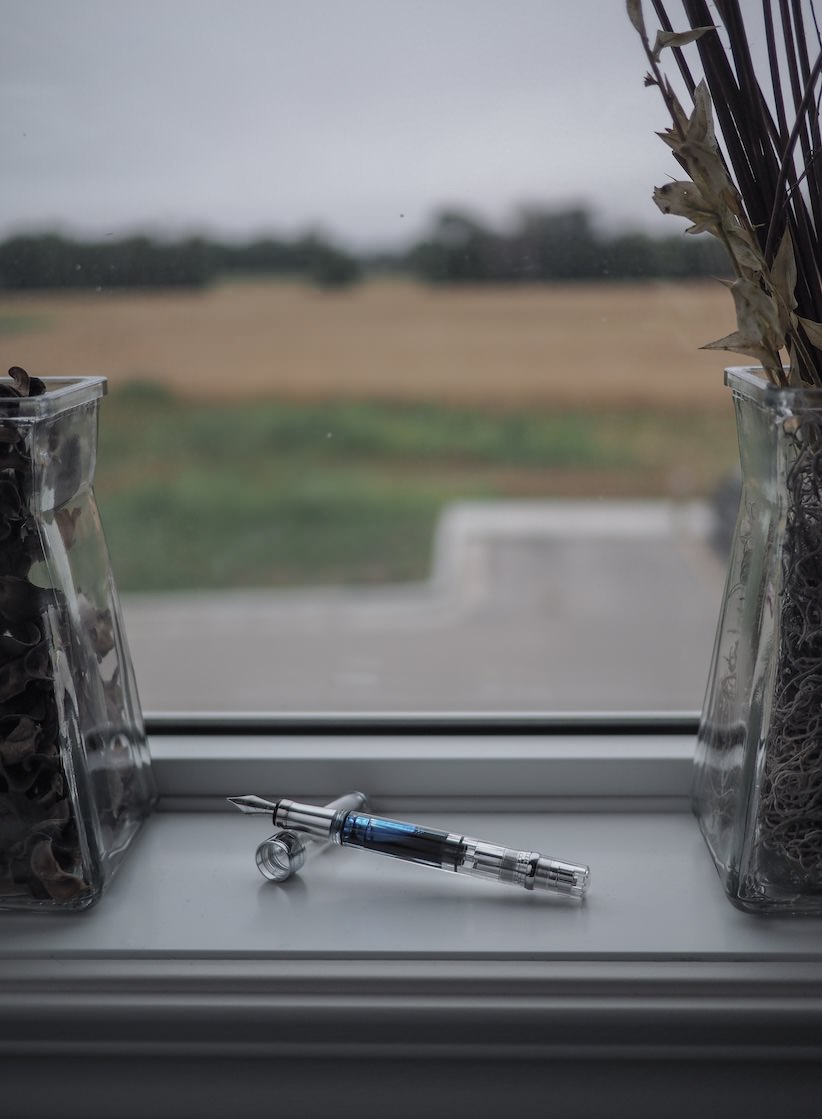 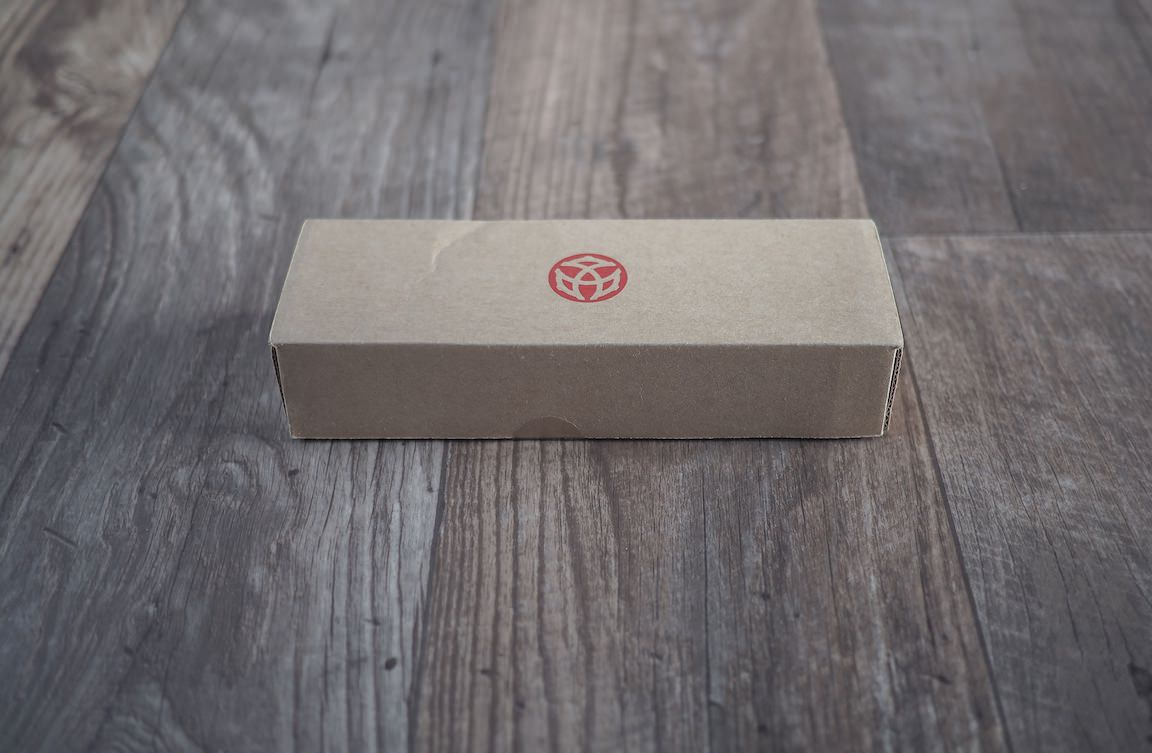 The 580AL’s unboxing experience set the stage for the pen’s grand entrance. The box is simple and is adorned with the unique TWSBI logo on top. 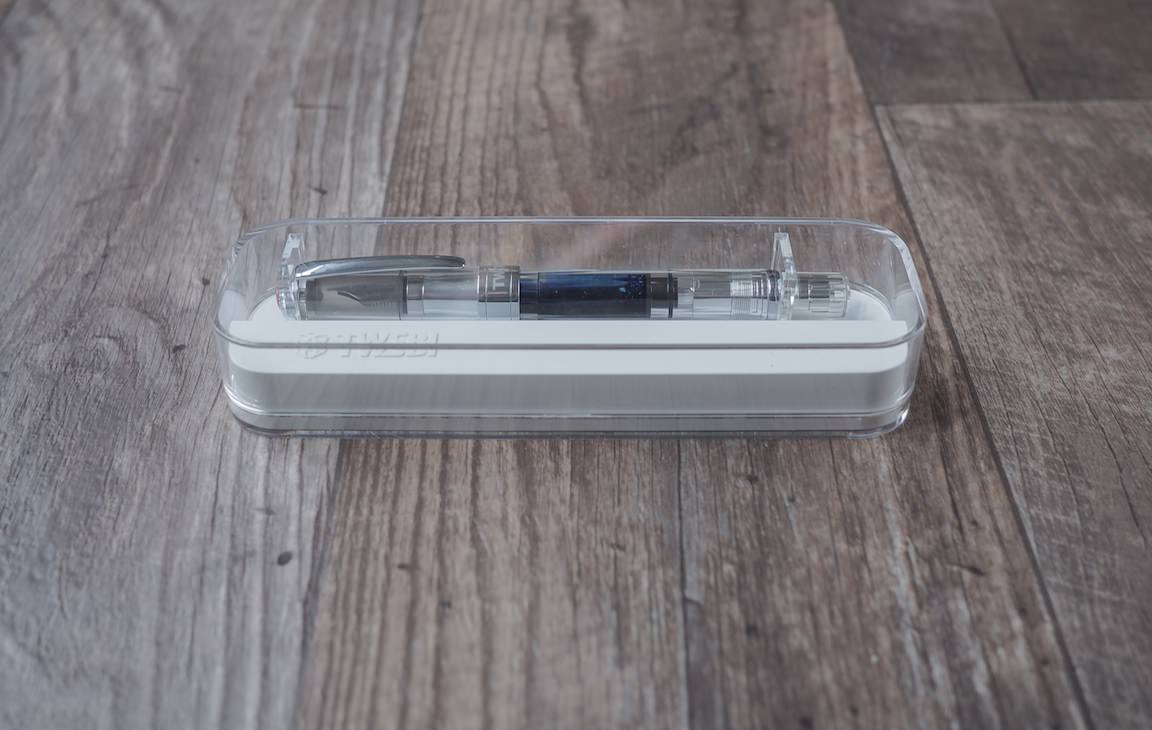 Opening the box kicks off the real show though. TWSBI’s pen packaging[1] is top-notch and is reminiscent of opening an Apple package. Each element of the packaging has been thought through and has been given a great design. Small aspects, like the clips holding the 580AL in place, have been designed specifically with the 580AL in mind. TWSBI rightly sets you off on the right foot with its wonderful packaging.

Underneath and inside the TWSBI’s display case is a small amount of lubricant that you can use to lubricate the 580AL’s many parts. TWSBI also includes a wrench to take apart the pen’s piston filling system, allowing for simple cleaning and simple maintenance of the pen. 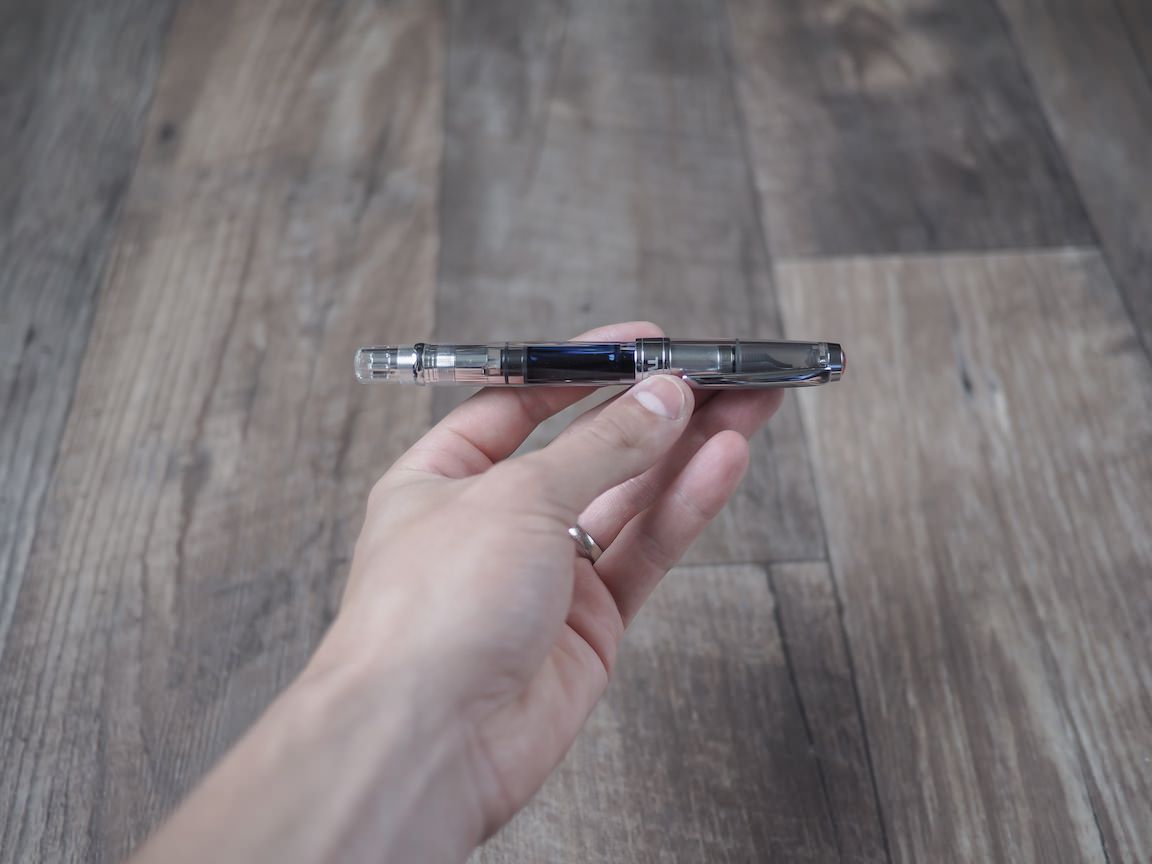 The Diamond 580AL is known for its clear, transparent body that pulls the drapes for all to see. The body is sleek, modern and comfortably durable. The 580AL is heavier than the Lamy Safari and, as a result, the entire pen has a higher quality feel. 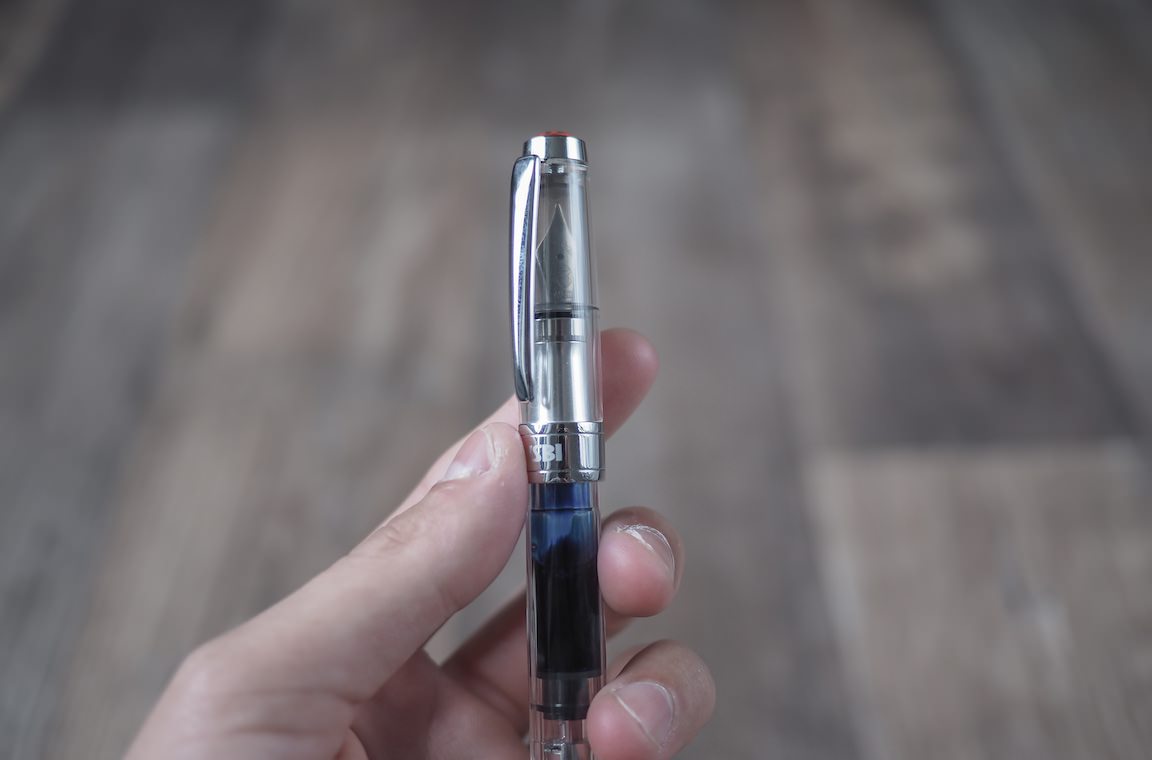 Like the rest of the body, the 580AL’s cap is transparent and shows the protected nib screwed safely behind glass doors. I really like the transparency throughout the 580AL’s aesthetic, but being able to see an unaligned nib inside the cap bugs me ever so slightly. Aligning the nib with the cap’s clip is dependent upon the alignment of the threads and I’m not willing to screw the cap on insecurely for the sake of an aligned nib. It’s a small miscue, but a miscue nonetheless. If you’re not obsessive about little details like this, feel free to giggle. 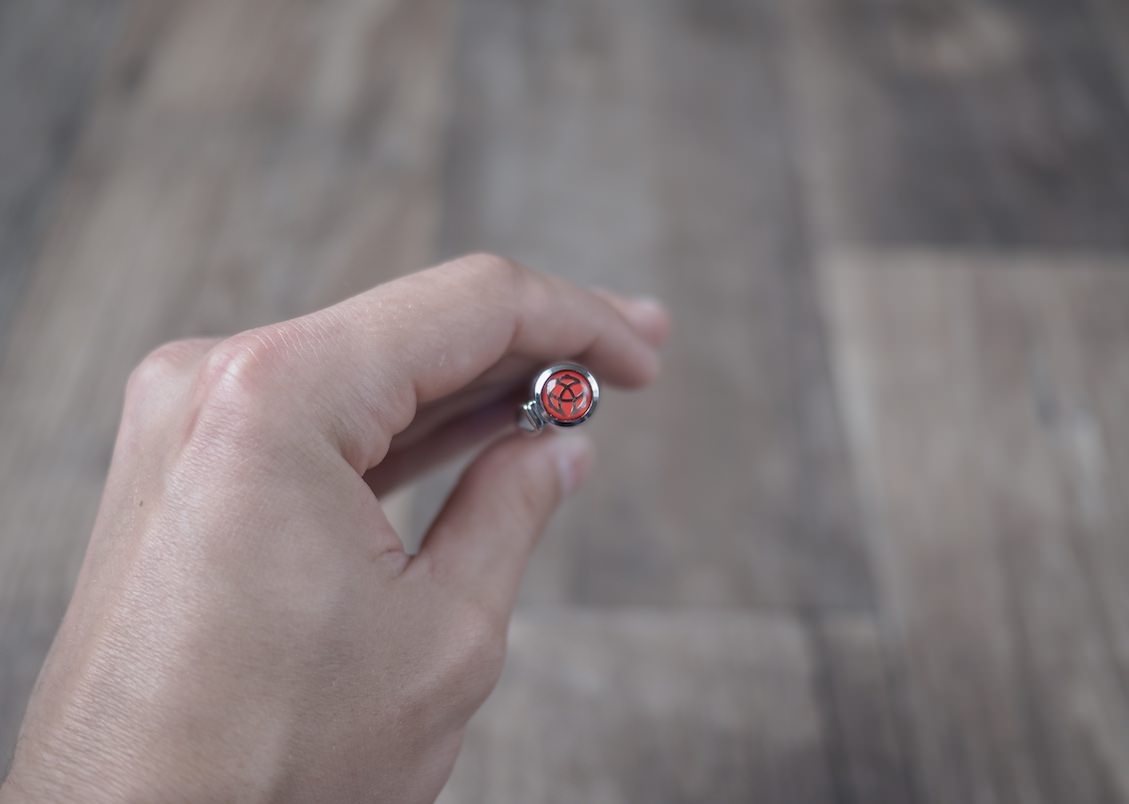 The cap’s finial mimics the TWSBI logo found on the pen’s packaging and adds an edgy aspect to the pen. Despite the transparent and chrome finish, the red finial stands strong in its unique qualities. At first, I hated how the finial contrasted the rest of the pen’s design idea, but I’ve recently come around.

The red finial also makes it easy to know which pen I’m pulling out of my bag when viewed from above. Aesthetics that look great and have utility are my absolute favourite. 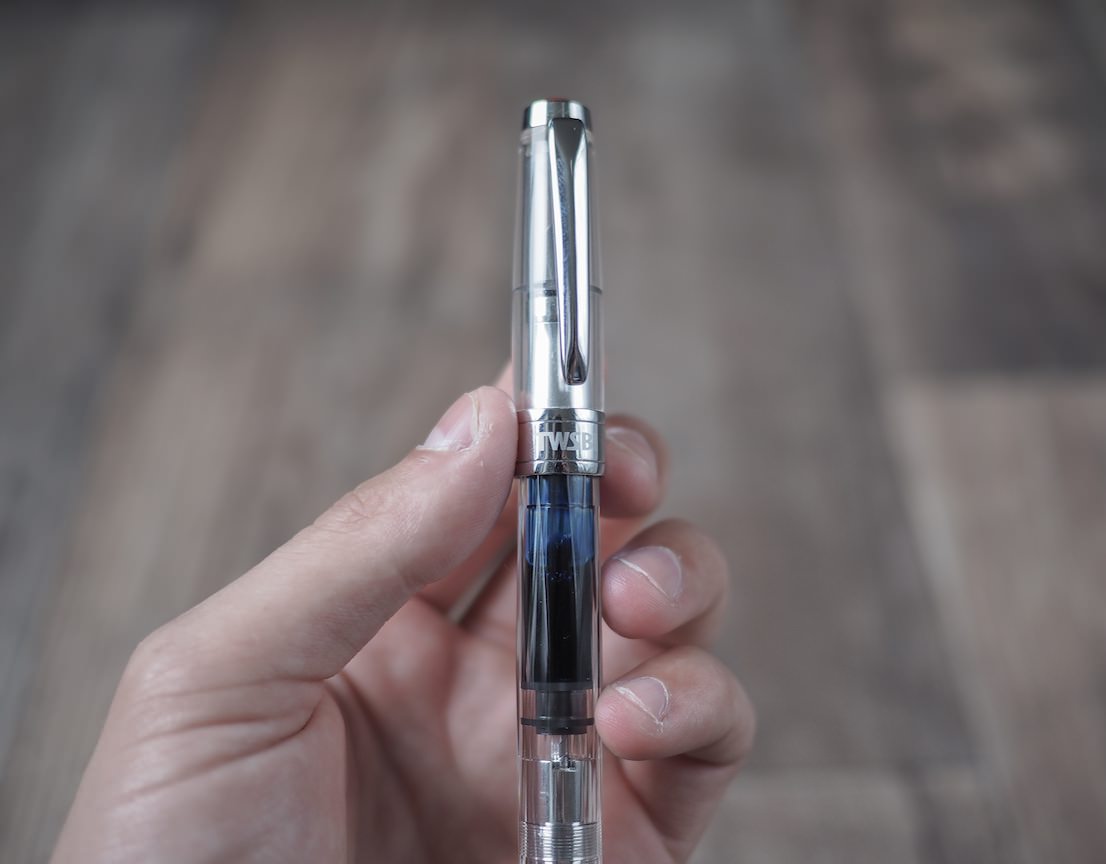 The 580AL’s cap has been given a chrome finish that is super reflective in bright light. “TWSBI” and “Diamond 580 Taiwan” line the cap in a light grey lettering that is difficult to see and even more difficult to capture in a photograph. 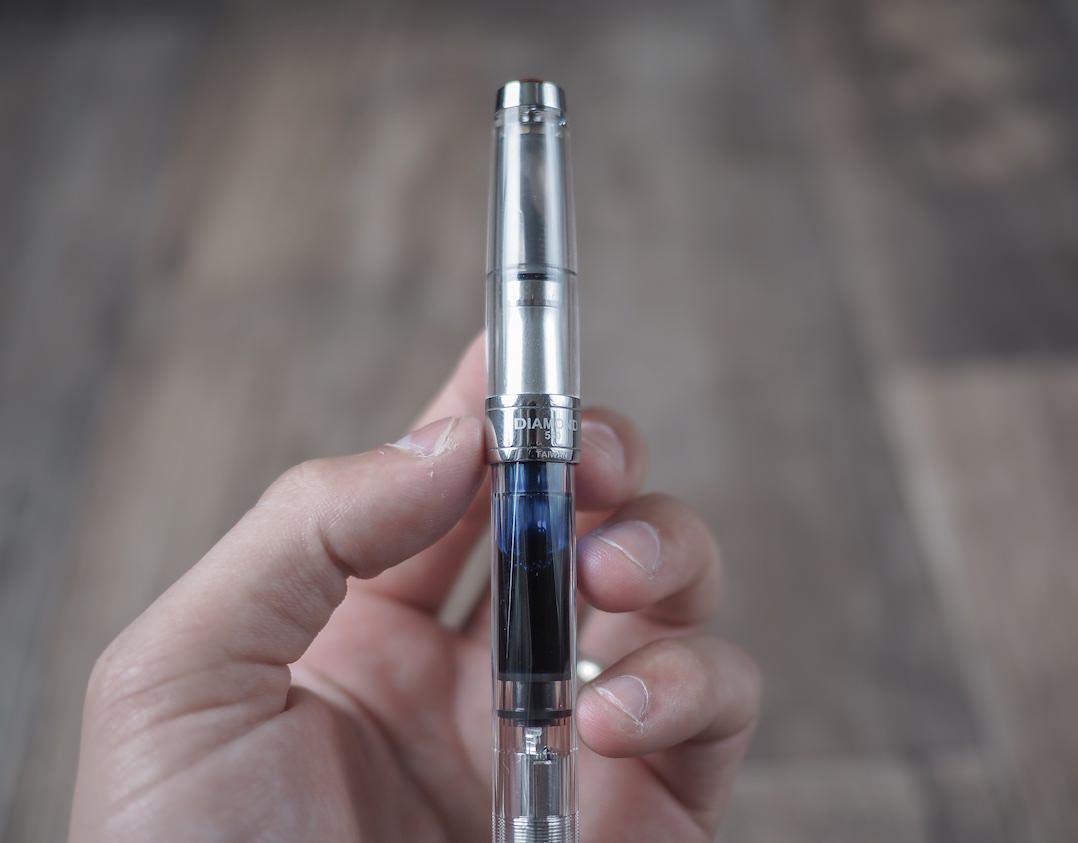 This chrome finish is absolutely gorgeous, but does require the occasional fingerprint wipe to maintain its beauty. In general, the cap is prone to fingerprints. I don’t mind how the cap holds fingerprints, but I’m sure there are obsessives who wouldn’t care for such a side effect. 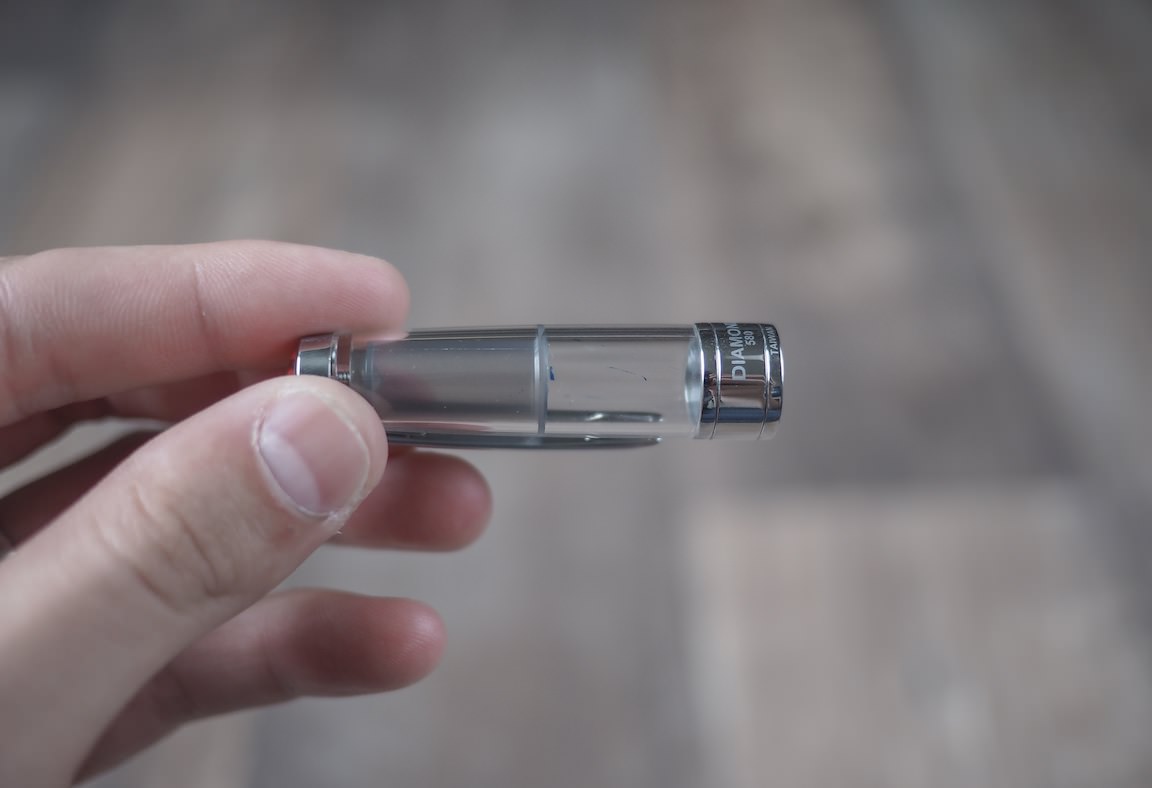 While the chrome finish looks brilliant in bright light, the transparent — borderline translucent — cap is prone to leftover ink splotches from the screwed-in nib. I knew all along that ink sitting on top of my Lamy Safari nib would smudge the inside of the cap when closed.

But at least I could never see it.

The 580AL’s transparent cap bares all and looks untidy and messy. I find this to be the only downfall of TWSBI’s “nothing to hide” design. 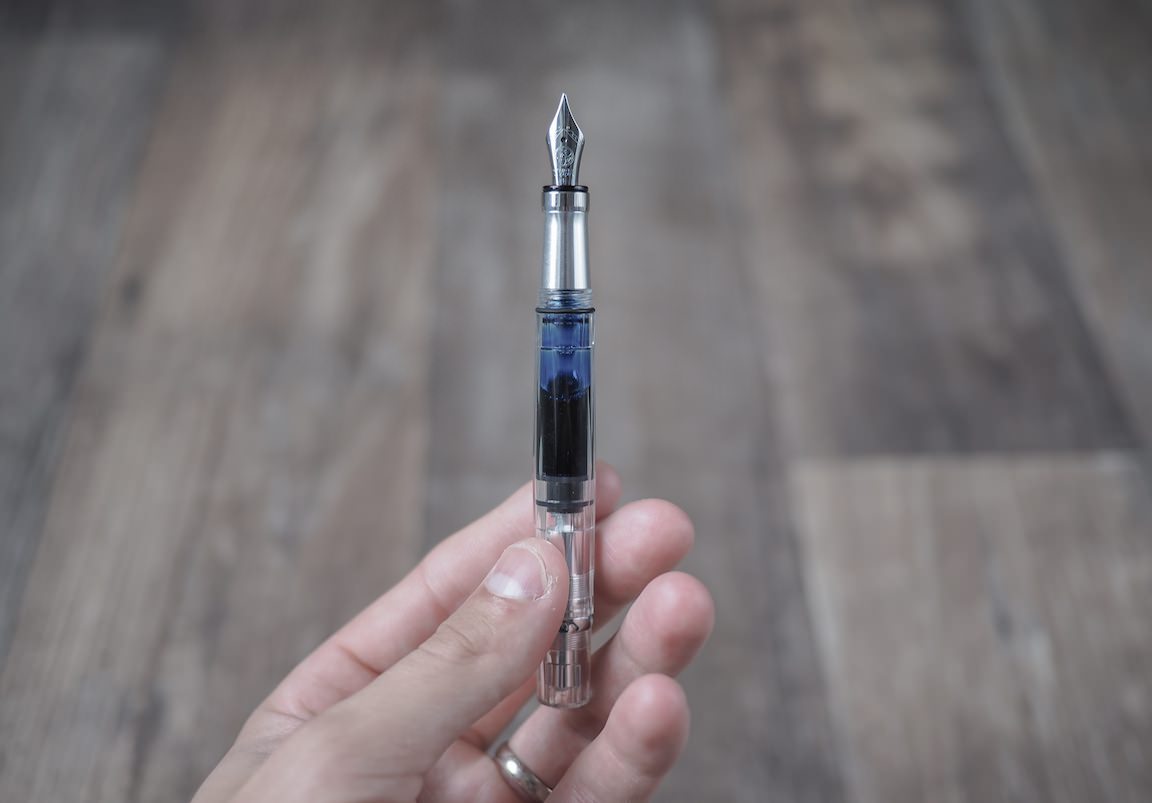 On the flip side, TWSBI’s bare-all design is ingenius with its 580AL ink reservoir. I don’t think there’s anything cooler than seeing my ink slosh around as I write or as I pull it from my messenger bag. The next best thing to an eyedropper pen is the TWSBI’s transparent pen body.

It’s more than just seeing your ink slosh around though. Being able to see your ink colour also adds — or rather, changes — the personality of the 580AL. If you’re feeling up for a fun, jubilant day, a bright green ink sloshing around in your 580AL will be the icing on the cake.

Moreover, this essentially makes every 580AL unique to its owner. Granted, there are many other 580AL owners who are sporting Iroshizuku Kon-Peki, but perhaps you won’t run into one of those people each and every day. Add in a Sailor Jentle Apricot ink and you’re sure to be the coolest kid on the block. This transparent pen body is easily my favourite part of the TWSBI 580AL. 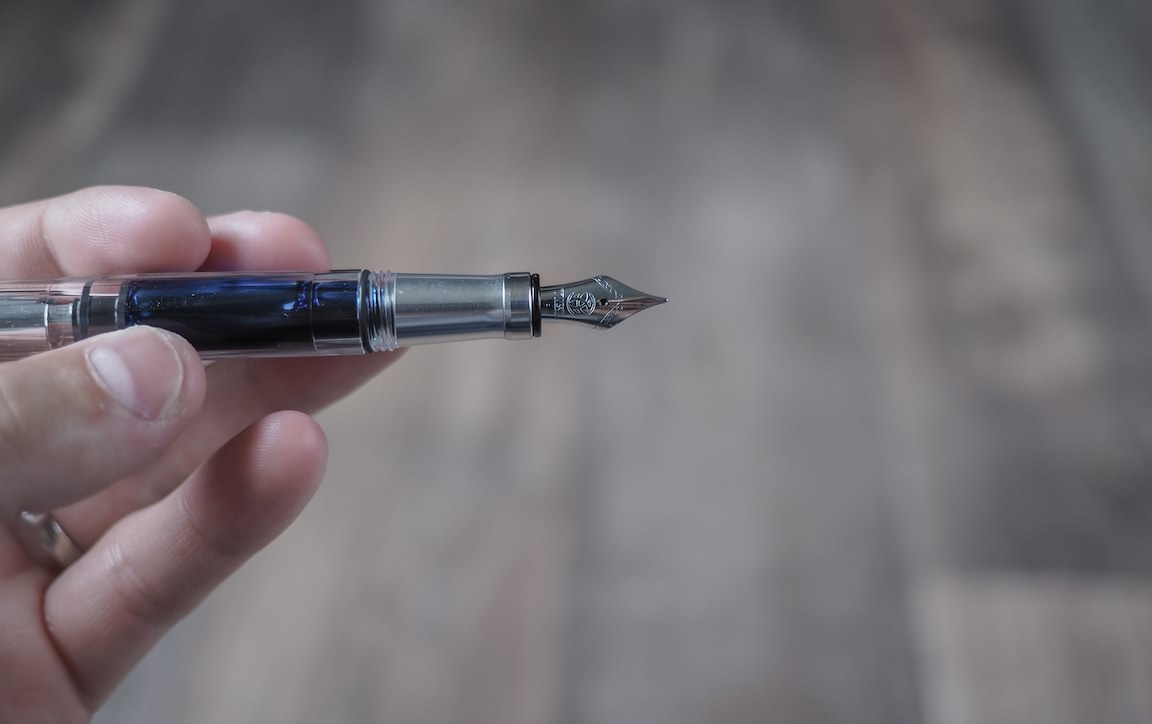 I remember stating in my Safari review that fine etchings in nibs were not to my taste.

Turns out I was inexperienced and ignorant. 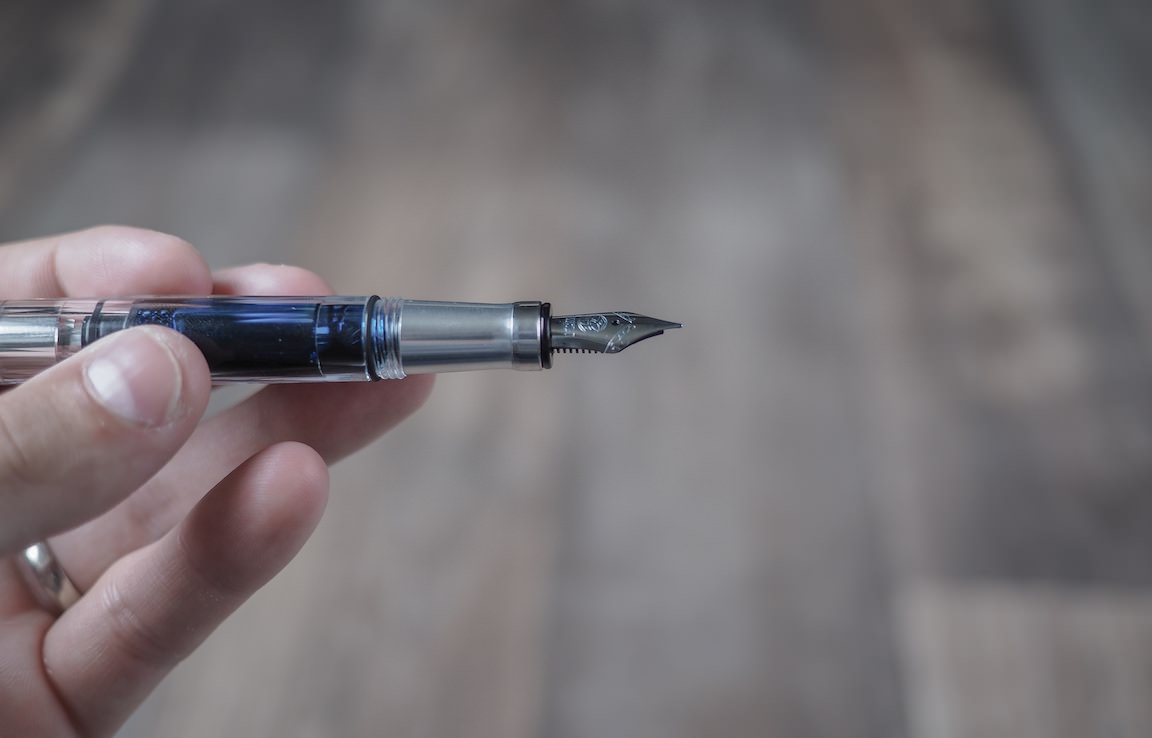 The 580AL’s nib looks great and I still find myself awestruck when peering down the pen in the middle of a pen-stroke.

The 580AL’s nib is also far larger than the Safari’s nib. I’m not sure what the implications are with the size of a nib, but I feel far more empowered when using a large nib. I can’t imagine what it must feel like to use one of those massive Masuyama nibs on a Franklin-Christoph. 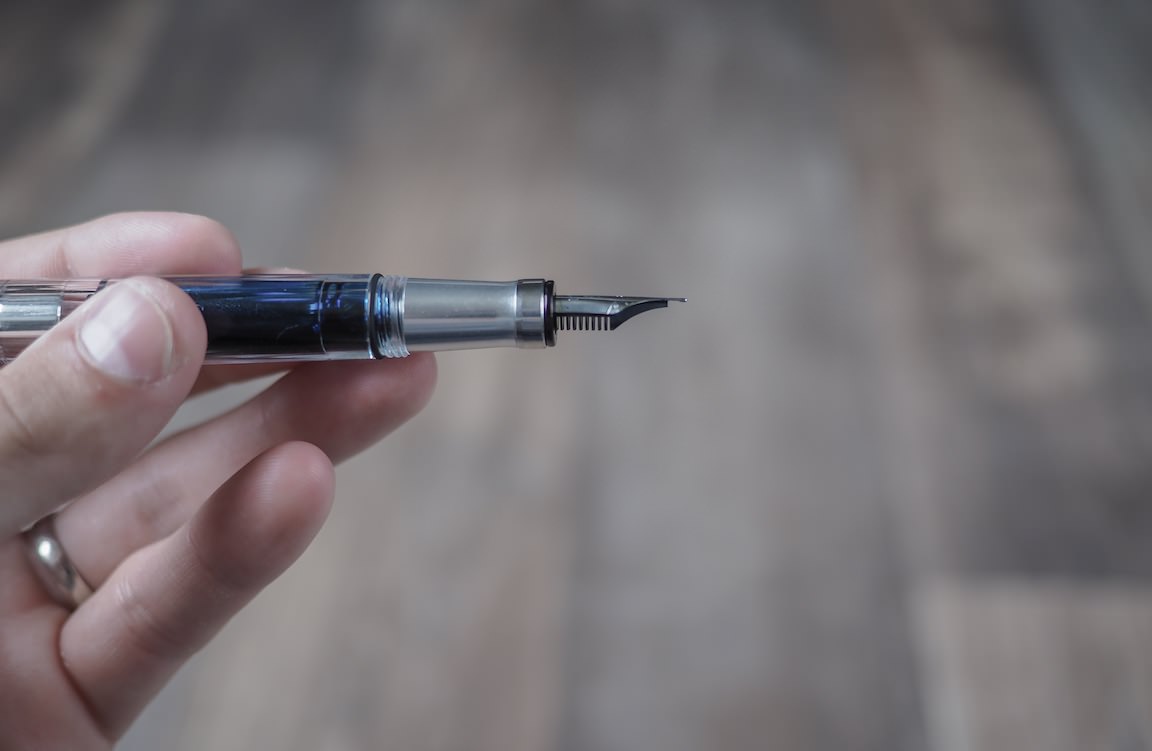 The grip section is made of aluminum and aids the durability of the pen. However, the placement of the threads to hold the cap in place can be problematic. I hold the pen further up the grip than normal and the threads are sharp enough to dig into my fingertip after extended use.

I know I’m not crazy about this either. I handed the pen to a lady I work with and she immediately noticed the placement of the threads. I don’t believe this is a deal breaker, but every pen company should look at Franklin-Christoph’s thread placements and consider making the switch. 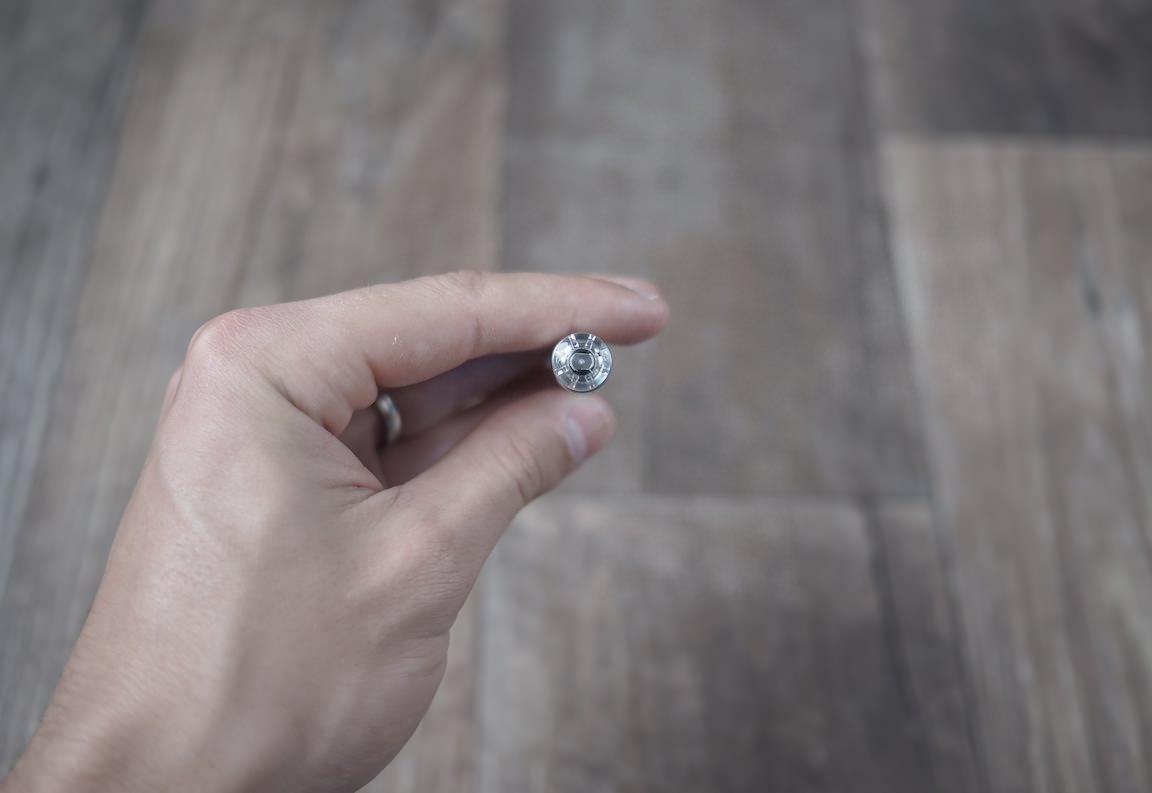 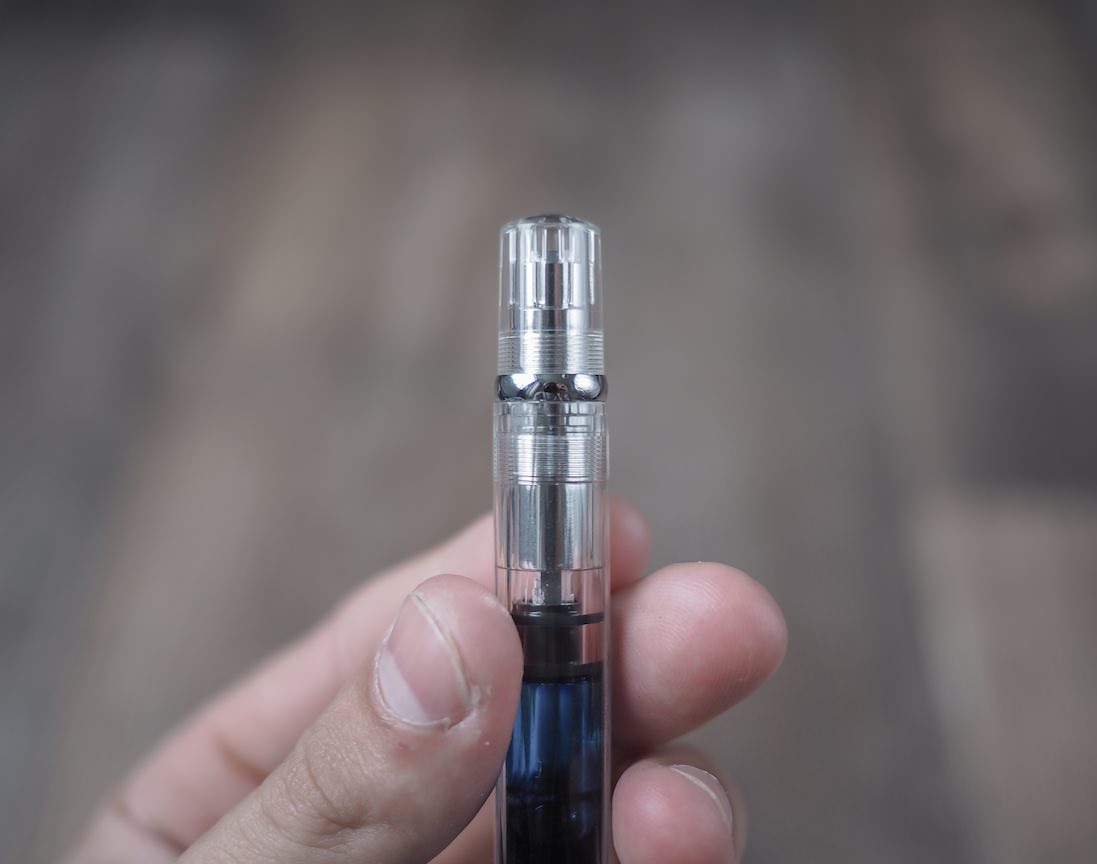 Last but not least, the TWSBI Diamond 580AL, like the other TWSBI 580 models, is a piston filler pen. The 580AL doesn’t use ink cartridges or converters to supply ink to the feed. Instead, the ink is siphoned into the reservoir via a piston system.

Like filling a converter, twisting the top of the 580AL pushes the piston down towards the nib and prepares the pen to be filled. Immersing the nib and feed unit in ink and twisting the pen’s top should fill the reservoir with your favourite ink. 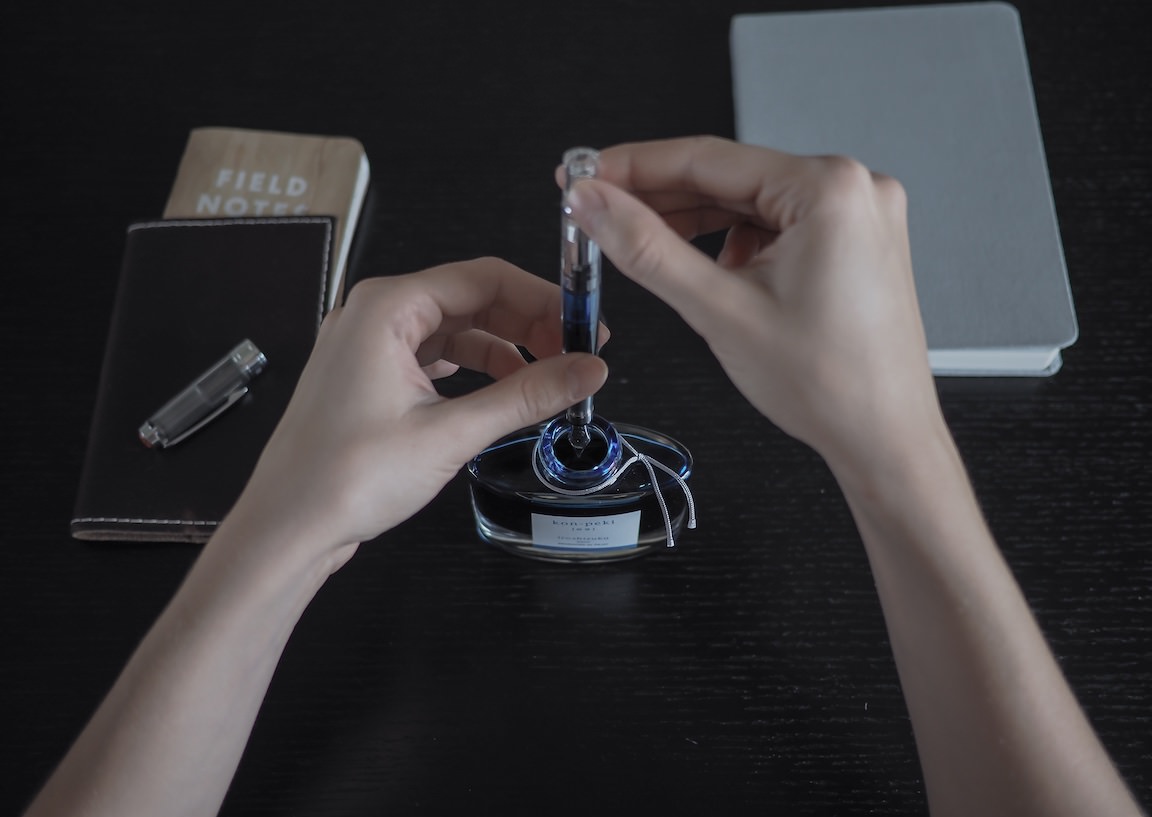 I’ve been blown away by the ease of the 580AL’s piston system. Emptying the ink reservoir and flushing out the pen body allows for a faster ink switch than any pen that utilizes converters. It’s also super easy to fill the pen when you’ve reached the last few drops of ink — which probably won’t happen that often due to the amount of ink the 580AL can hold.

However, it also makes this pen more expensive right out of the gate — you’ll need a bottle of ink after all. Although $60 USD is incredibly inexpensive for a piston filler fountain pen of this quality, the added cost of a bottle of ink makes the TWSBI Diamond 580AL an $80-$100 initial investment. 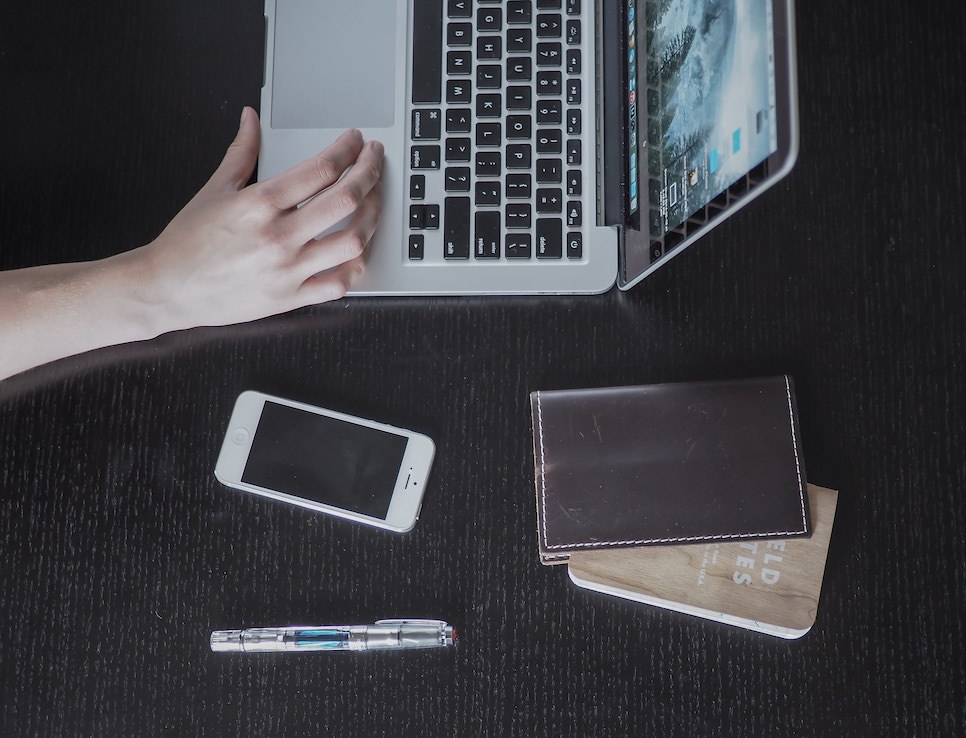 I bought a fine 580AL to try out a new nib size. I have to say I enjoy the thicker line under most circumstances. The fine nib writes smooth and wet when used at the normal writing angle.

Changing that nib angle results in skips that I didn’t experience with the Lamy Safari however. If I ever wanted to add a slight amount of line variation to my handwriting with the Safari, I would give the pen a very small twist to the right. This would angle the nib to give a thinner line on horizontal strokes and a thicker line on vertical strokes. 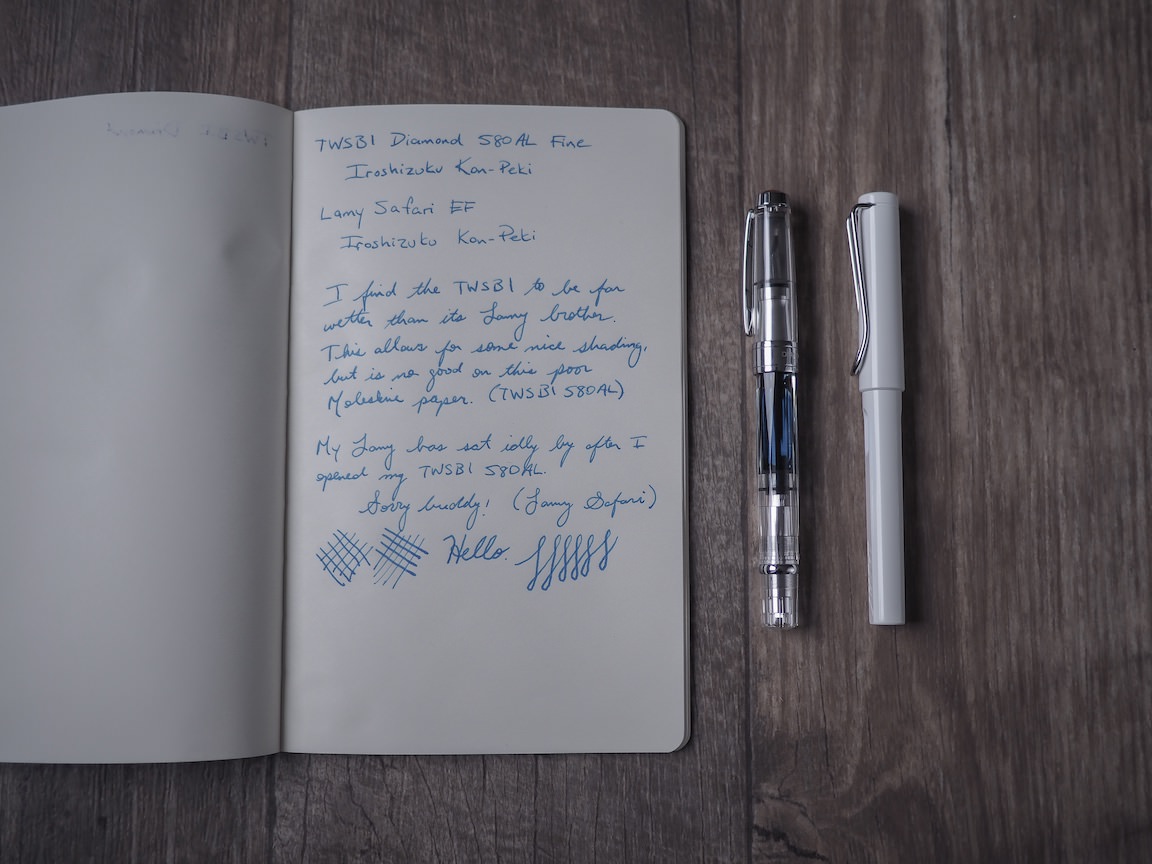 The TWSBI fine nib is more picky. The nib misbehaves if the pen twists in my hand mid-writing and — more often than I’d like — I’ve had to return to a letter where the nib skipped.

Luckily, where the Safari’s nib performed admirably at awkward angles, it fell short in terms of nib flexibility. Although the TWSBI’s nib is made of steel, there is still more flex to be had to vary its line widths.[2] Dipping my toe into a more flexible nib makes me want to dive into the Pilot/Namiki Falcon in the future. 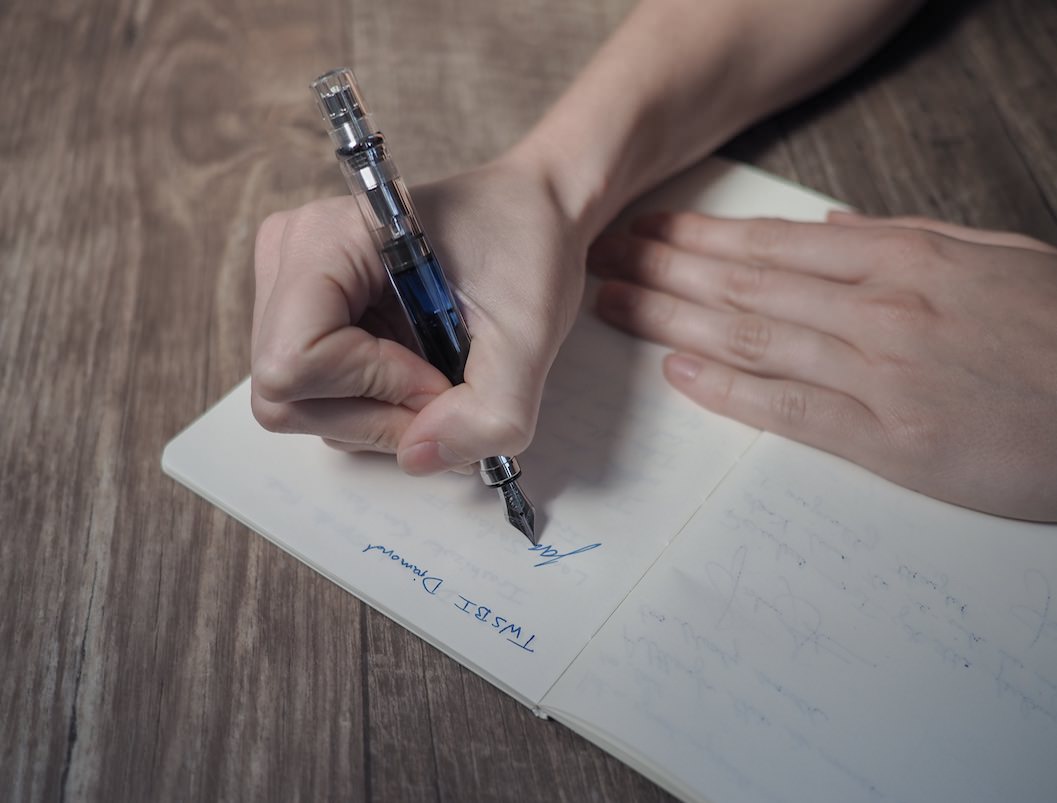 Fully loaded with ink, the TWSBI Diamond 580AL has a comfortable weight. Ignoring the thread placement, writing with the 580AL for extended periods of time is a breeze. There’s no need to post the cap as the pen’s weight is evenly distributed throughout the body.

In reality though, the pen wasn’t designed to be posted; the cap doesn’t slide deep onto the body and the posted pen ends up uncomfortably long. Worse yet, taking the cap off the posted pen results in a twist of the piston system and a large drop of ink shooting out of the pen’s feed. 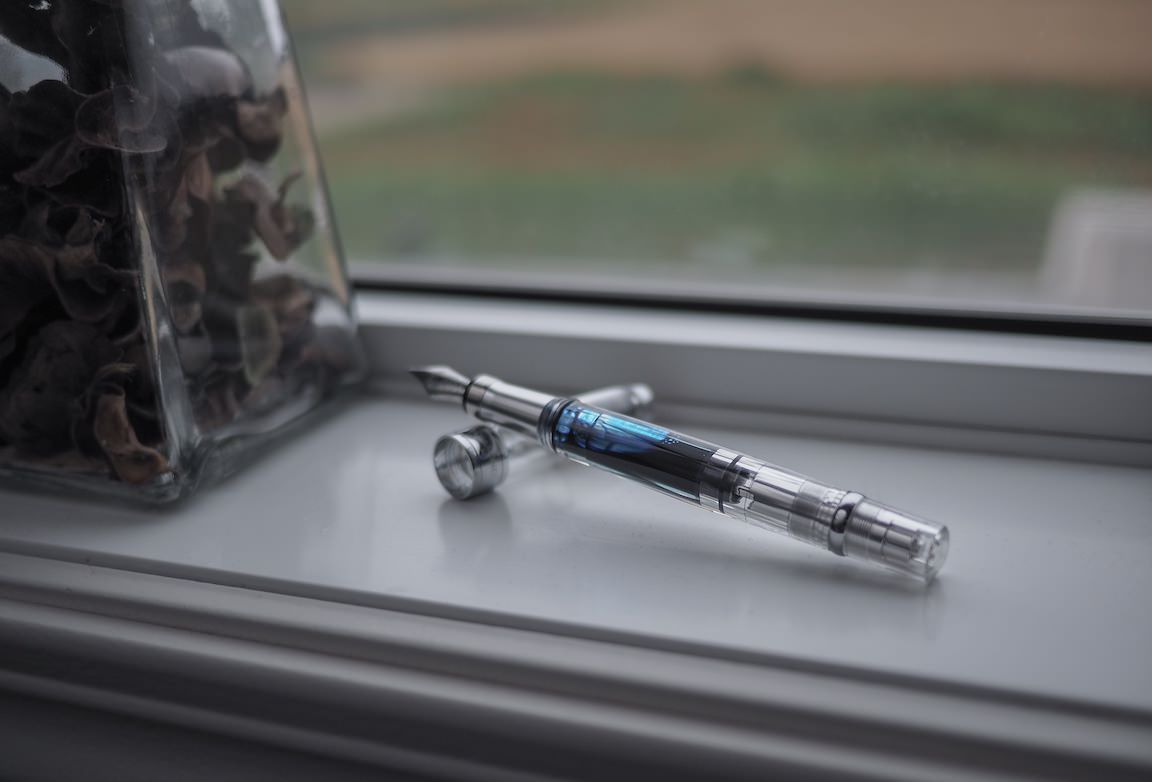 I get the feeling the TWSBI Diamond 580AL is a lot like its older brothers. The TWSBI 540 was replaced with the 580 due to some design flaws that caused the 540 to crack in unfortunate spots. The 580AL is essentially a more durable 580. Aluminum parts have replaced plastic parts that broke after heavy use.

But the aluminum parts make the 580AL its own, unique pen. The aluminum and chrome are reflective, durable and classy. The clear pen body emits personality through your ink choice. And the large, smooth nib makes writing a thoroughly enjoyable experience.

The TWSBI Diamond 580AL topped my fountain pen wishlist and I’m glad I chose this to be my first big pen purchase. I foresee the 580AL becoming my workhorse pen. All future pens will be compared to my new, cherished TWSBI. I couldn’t more wholeheartedly support Brad’s decision to name the TWSBI 580 the best pen in the world.