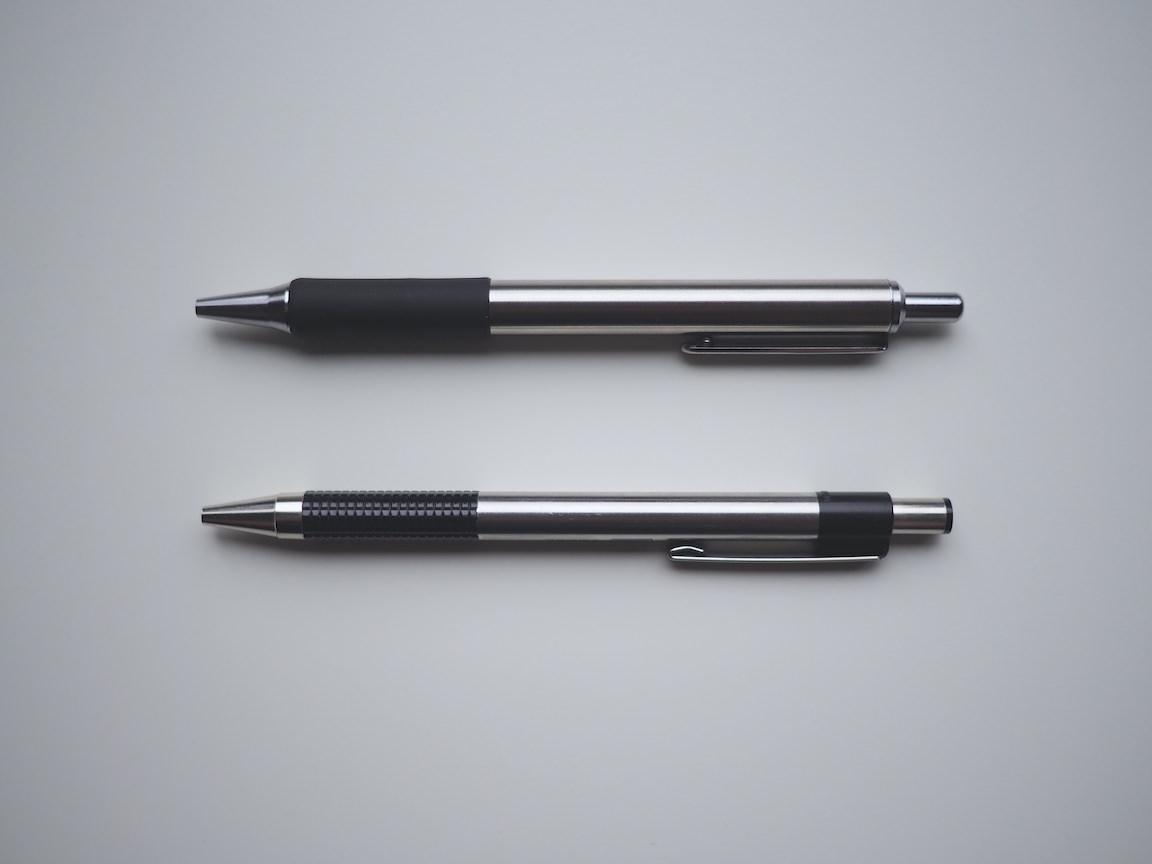 When the Staples lady asked if I needed help picking a pen a few months ago, I stood in fear. The Zebra F-301 was eyeing me down, but the reviews said to stay clear.

So when I went back to Staples this week and found the premium F-402, I didn’t need any help making a quick decision. 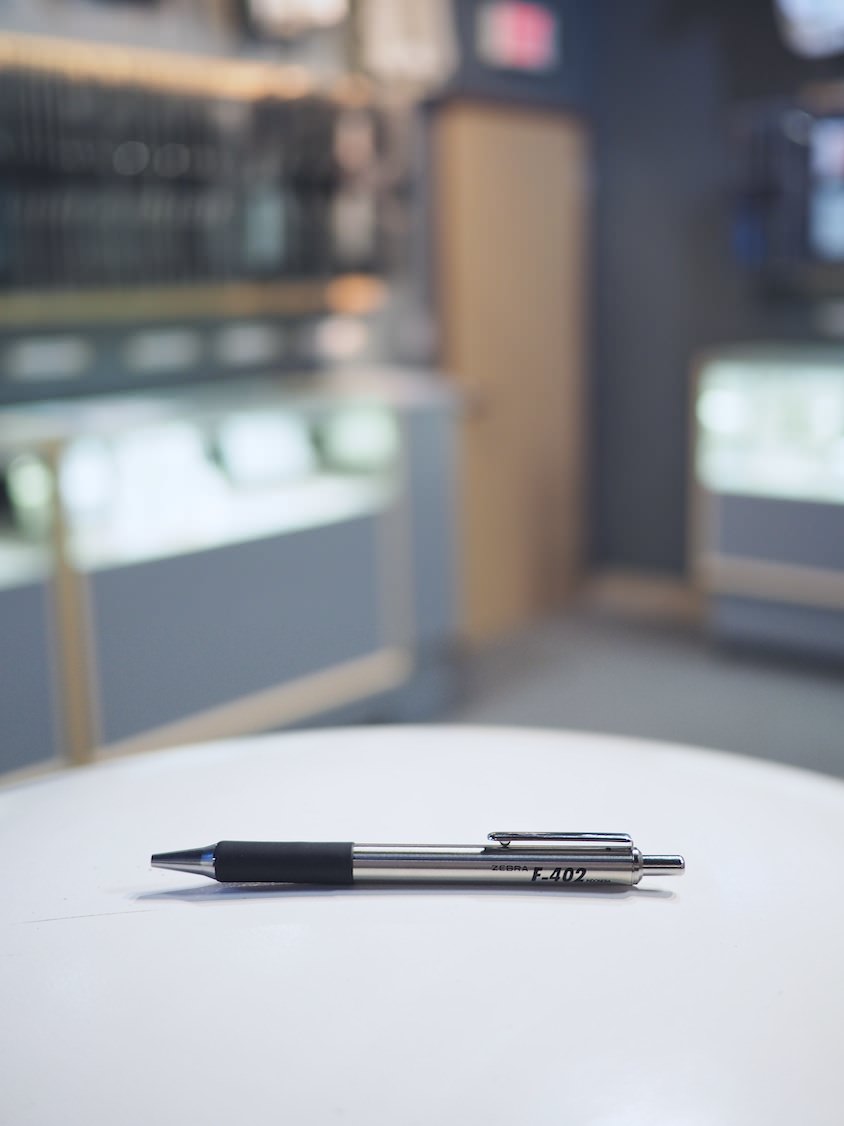 The Zebra F-402 is the executive’s F-301. It’s bulkier and flashier and comes with a sleek metallic design.

The bulkier design is hardly bulkier, but it is noticeable in comparison to the F-301. The pen is undoubtedly set in your hand and the extra heft lends the F-402 a higher class feeling. 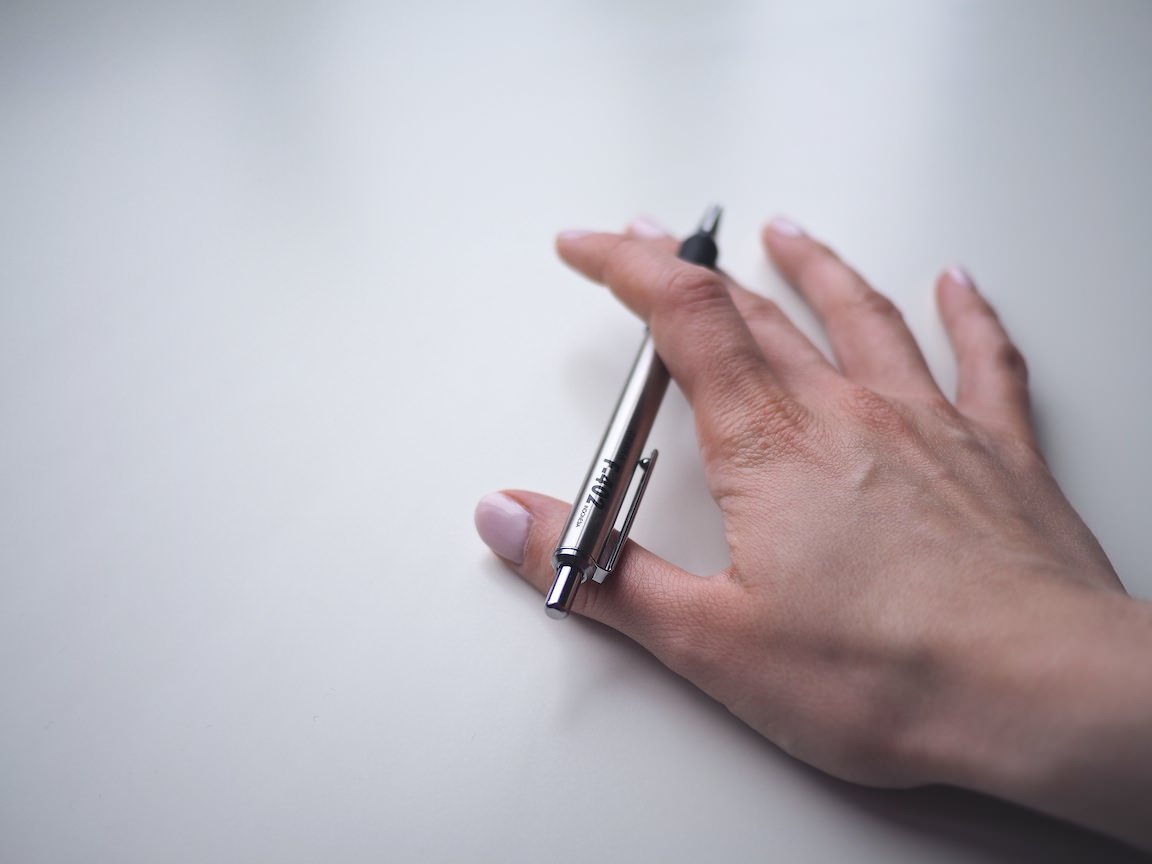 I really like the way the pen’s metal body shines in the light. The stainless steel body isn’t riddled with plastic like the F-301. As stated, this leads to a higher class writing experience, but it also becomes a small fashion statement for everyone else in the office to see. 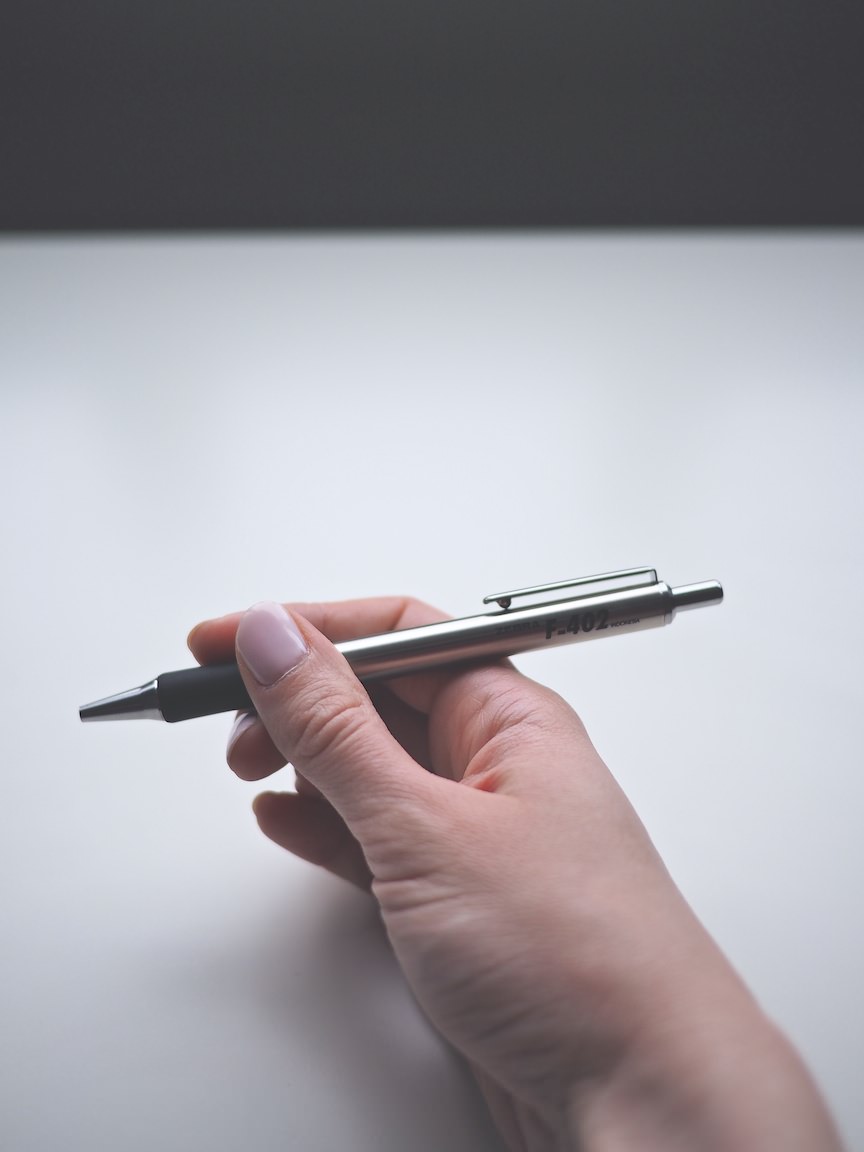 I’ve long searched for a perfect everyday carry pen. Recently, I’ve been set on my Fisher Space Pen. At my desk, the F-301 was my go-to pen for writing notes in my Sciences Field Notes book. As expected, the F-402 has uprooted the F-301’s place at my desk and has rendered the F-301 the unfortunate spot as my “bag pen”. 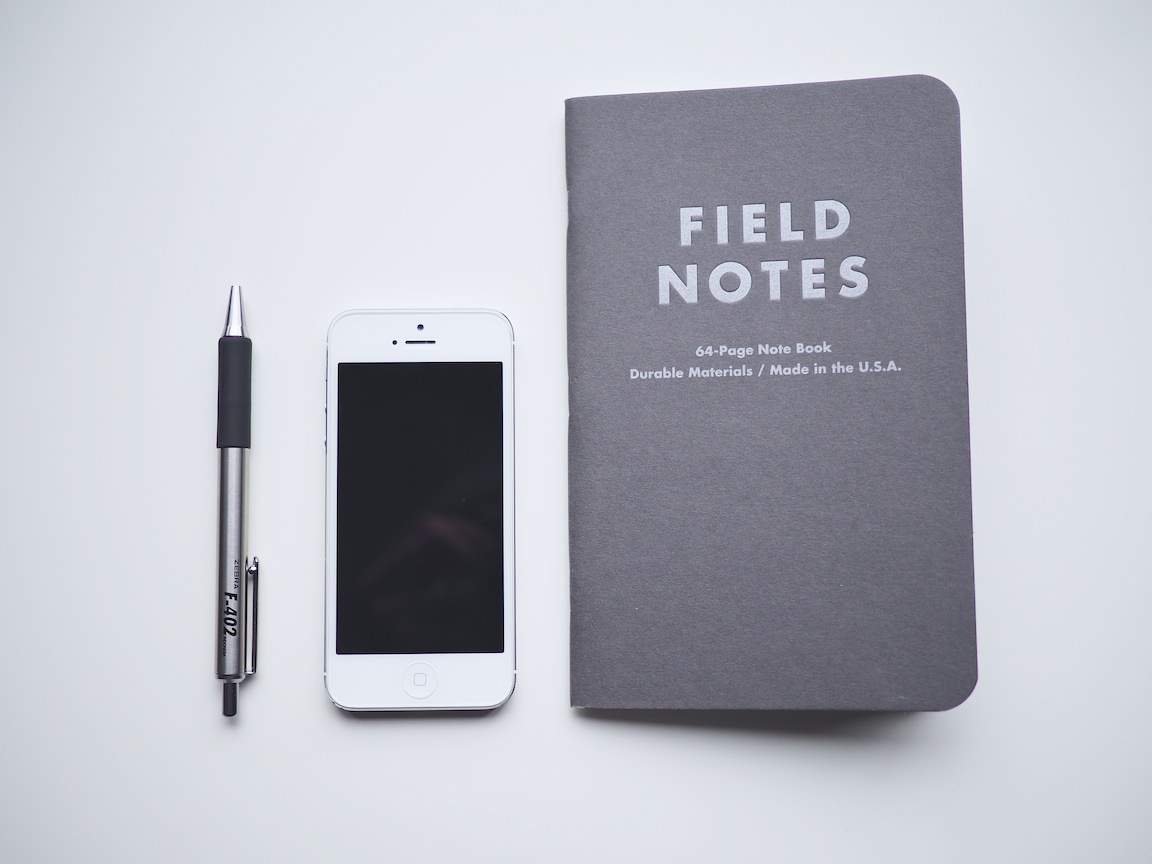 The F-402 fits beautifully in the wood/glass/cement/steel architectural and design elements we love today. Next to an iPhone, iPad or Mac, the F-402 looks right at home on your desk. 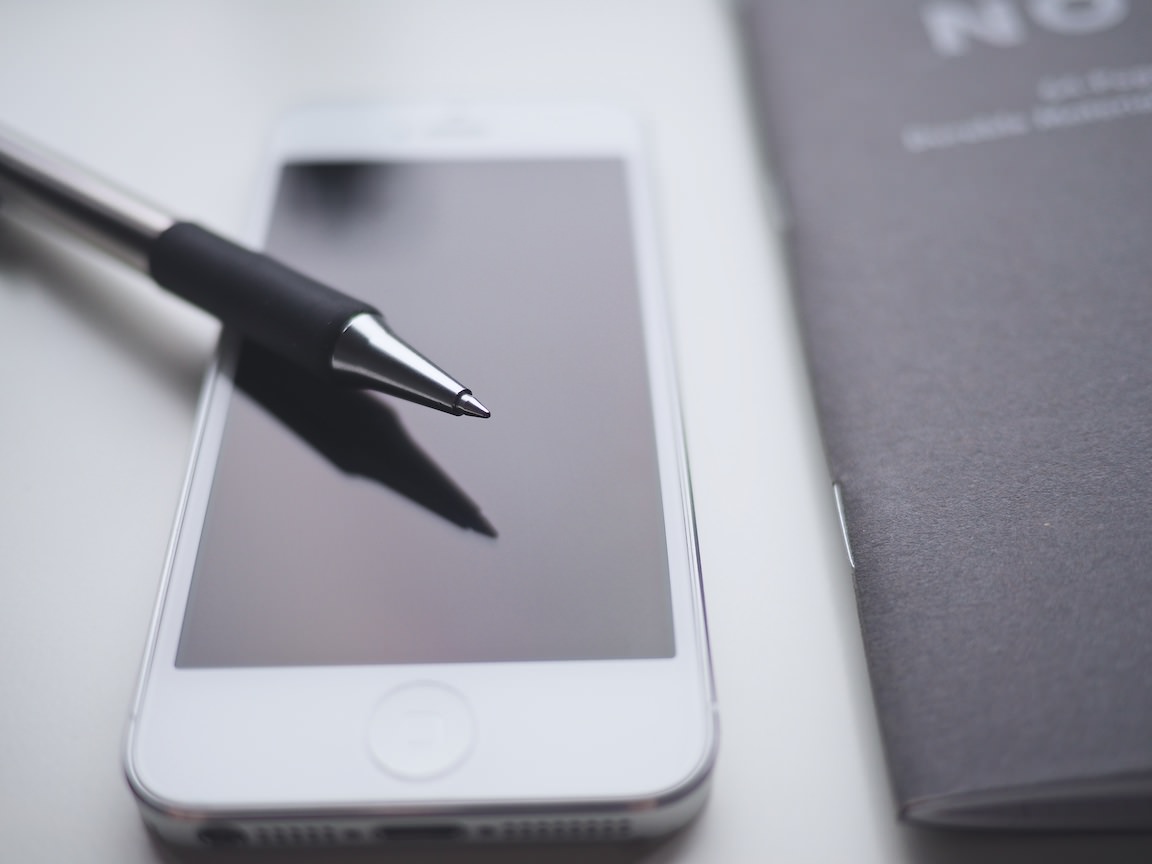 Like the F-301, the F-402 has a 0.7mm point, resulting in thin lines and less ink flow. I’ve found the F-402 to be slightly scratchy at times and I’ve come to prefer this. The scratchiness tells me I’m writing and gives a physical feedback that a Uni-ball Jetstream doesn’t. 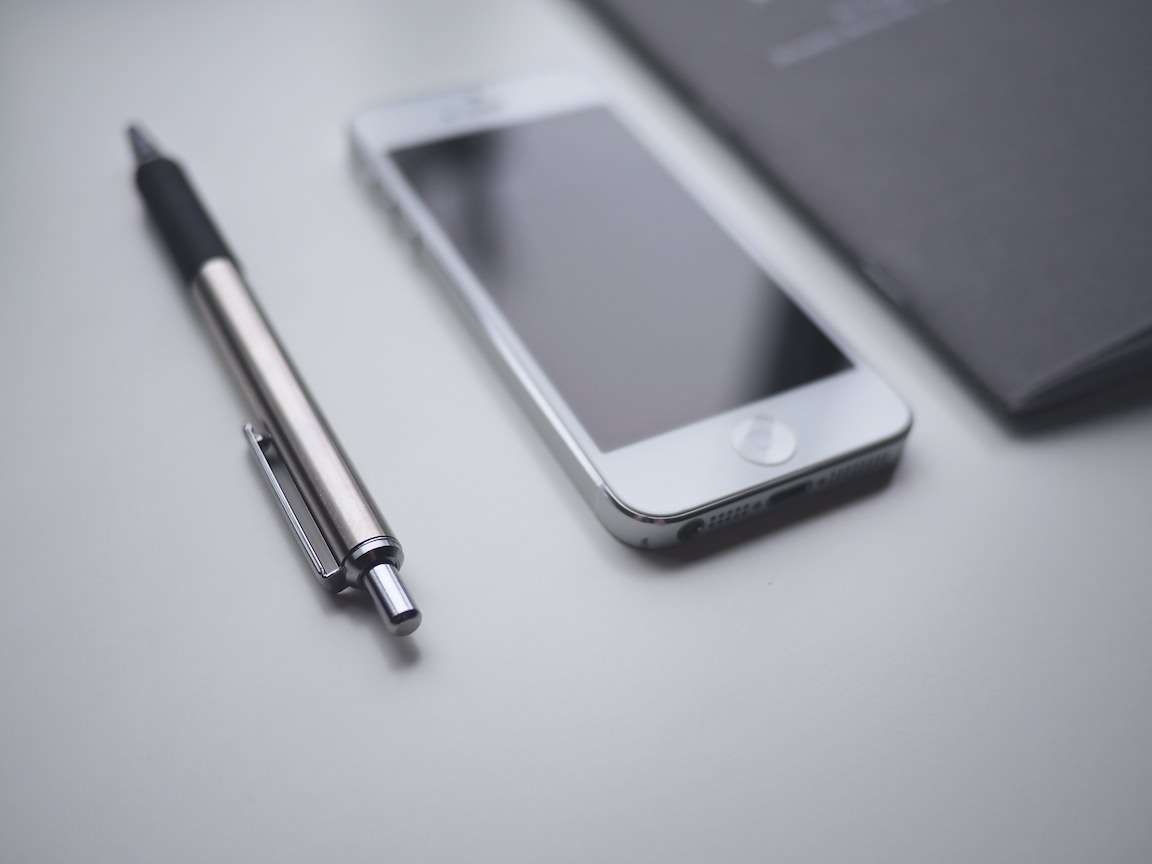 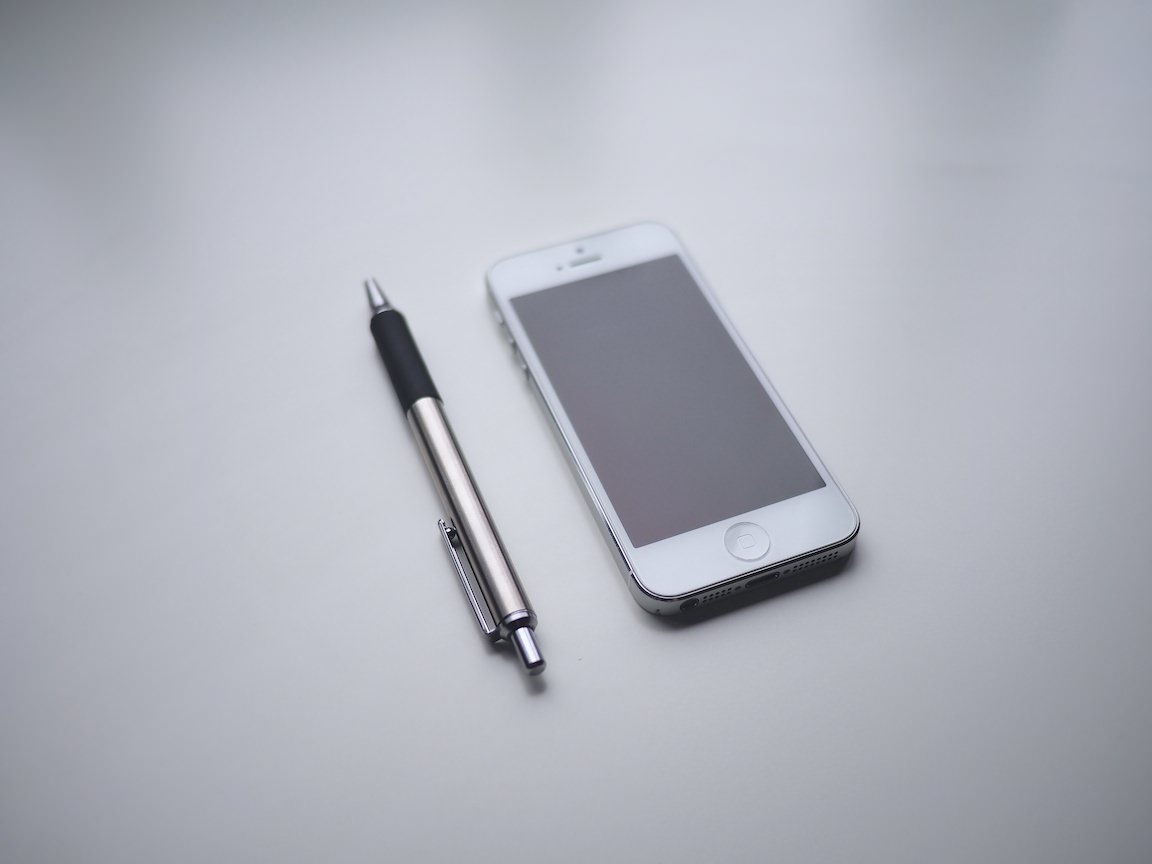 The F-402 is just barely longer than the F-301. There isn’t a change in writing experience, but they don’t line up perfectly when sitting side by side. 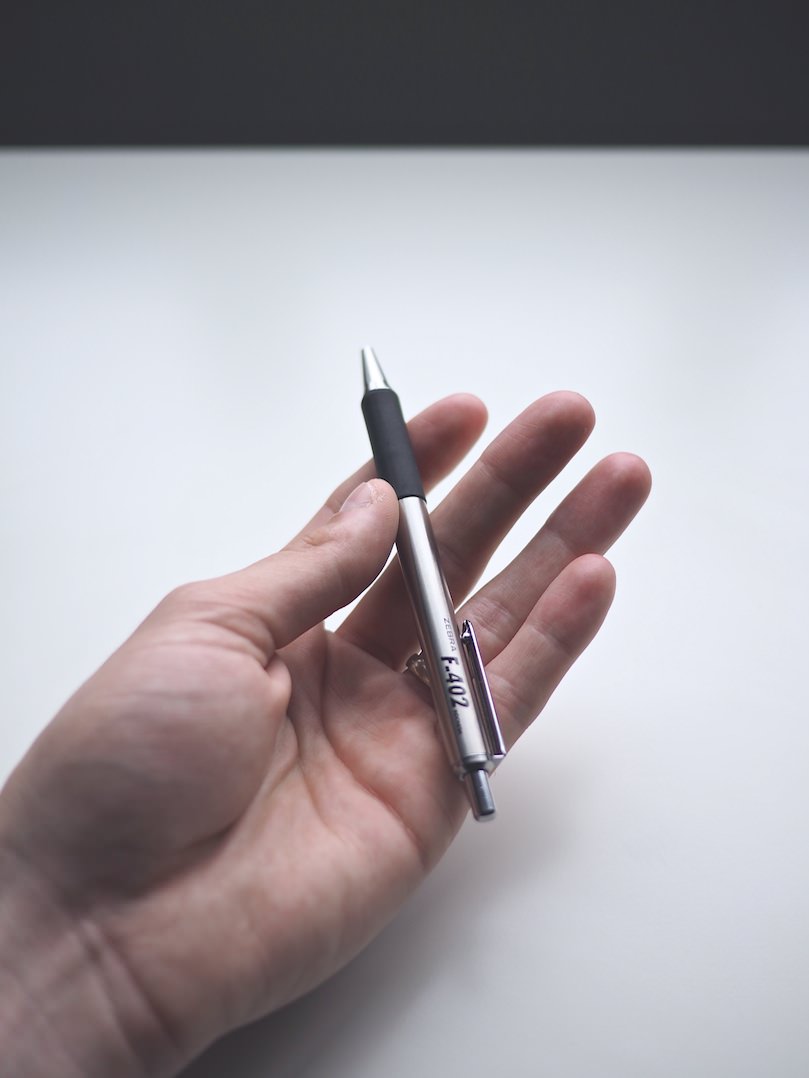 The F-402’s clip is also of a premium finish. The clip is super shiny and is surprisingly more sturdy than the F-301. I do prefer the way the F-301’s clip folds over — the clip is easier to slide into your shirt pocket than the premium F-402. Here, the F-402 is beauty before brawn. 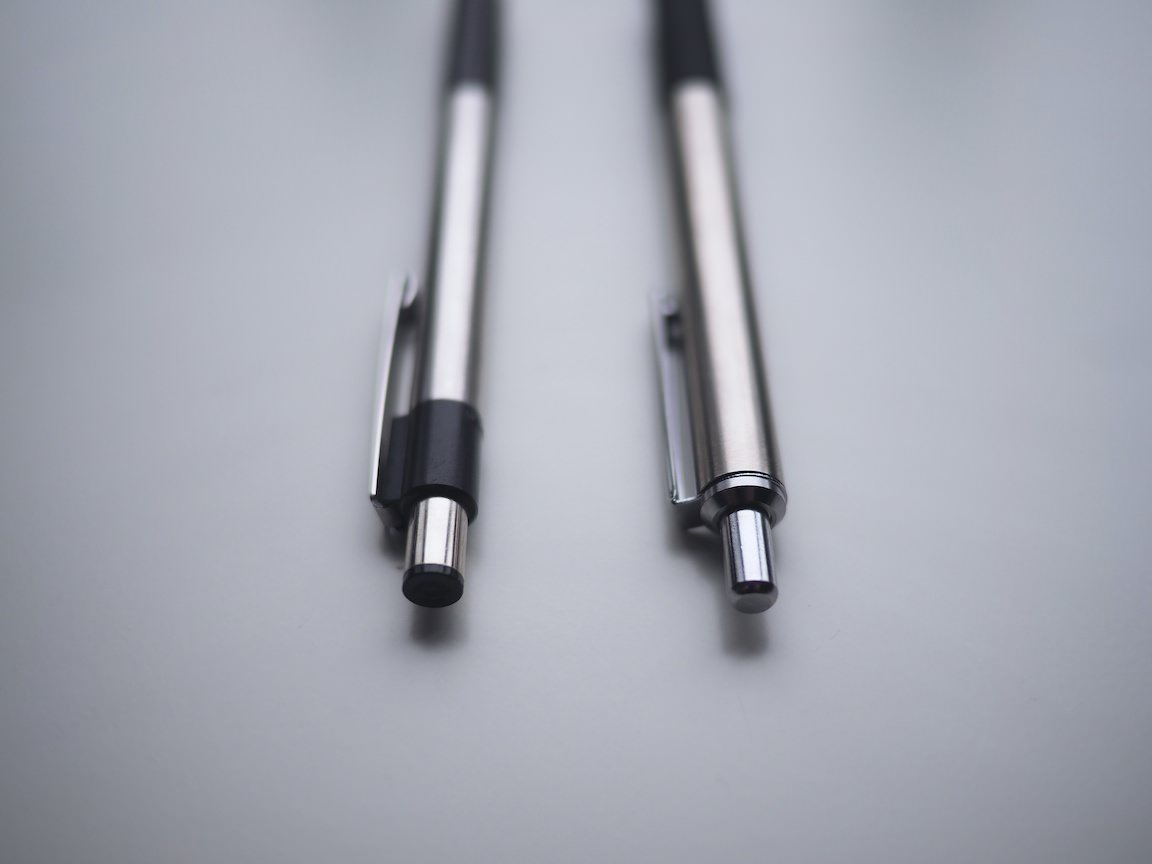 Like the F-301, the F-402 is a retractable extra fine pen. However, the retractor is made entirely of steel on the F-402. The added cost has to go somewhere right?

Despite the uniform metallic design, the retractor is sub-par. The click isn’t as fulfilling as the F-301 and I often feel like the F-402’s retractor is loose. Maybe I have a bad pen, but the F-301’s plastic tipped retractor wins in my books. 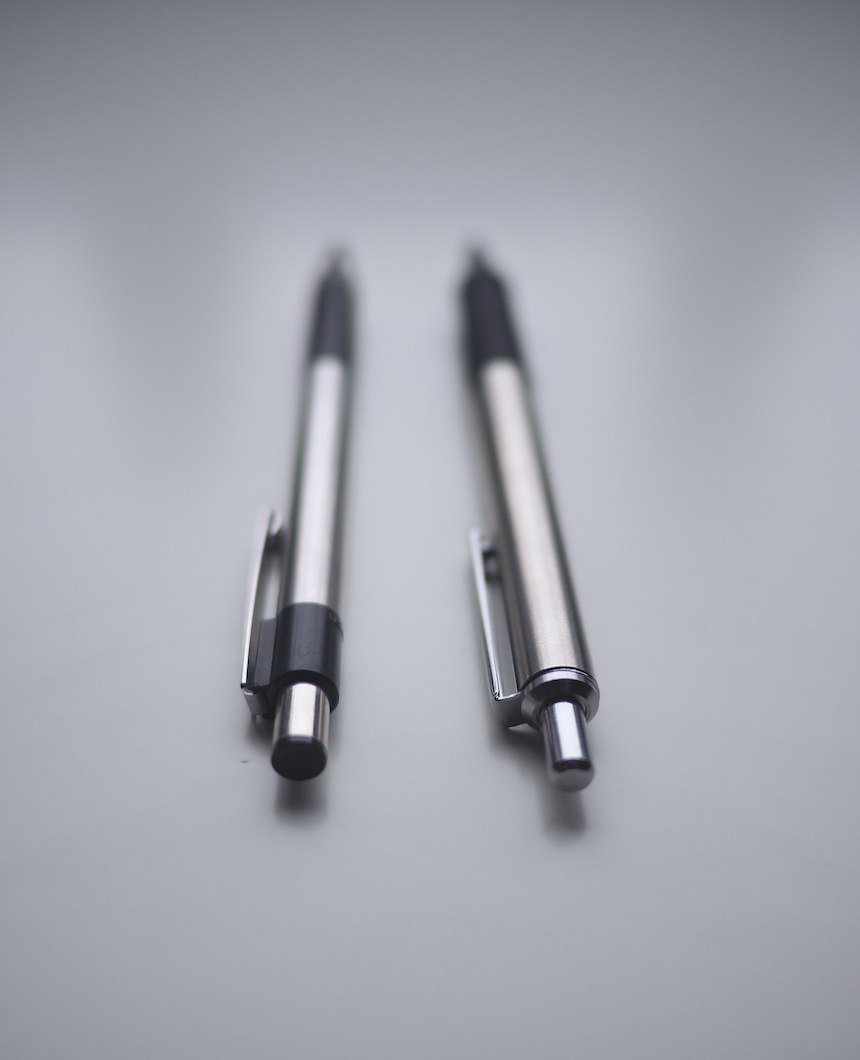 Most notably, the F-402 comes with a rubberized grip. This was my biggest complaint with the solid F-301 — the grip is made of a hard, ridged plastic that digs into your fingers after long writing sessions. The F-402 aims to improve this design with (again) a premium grip. 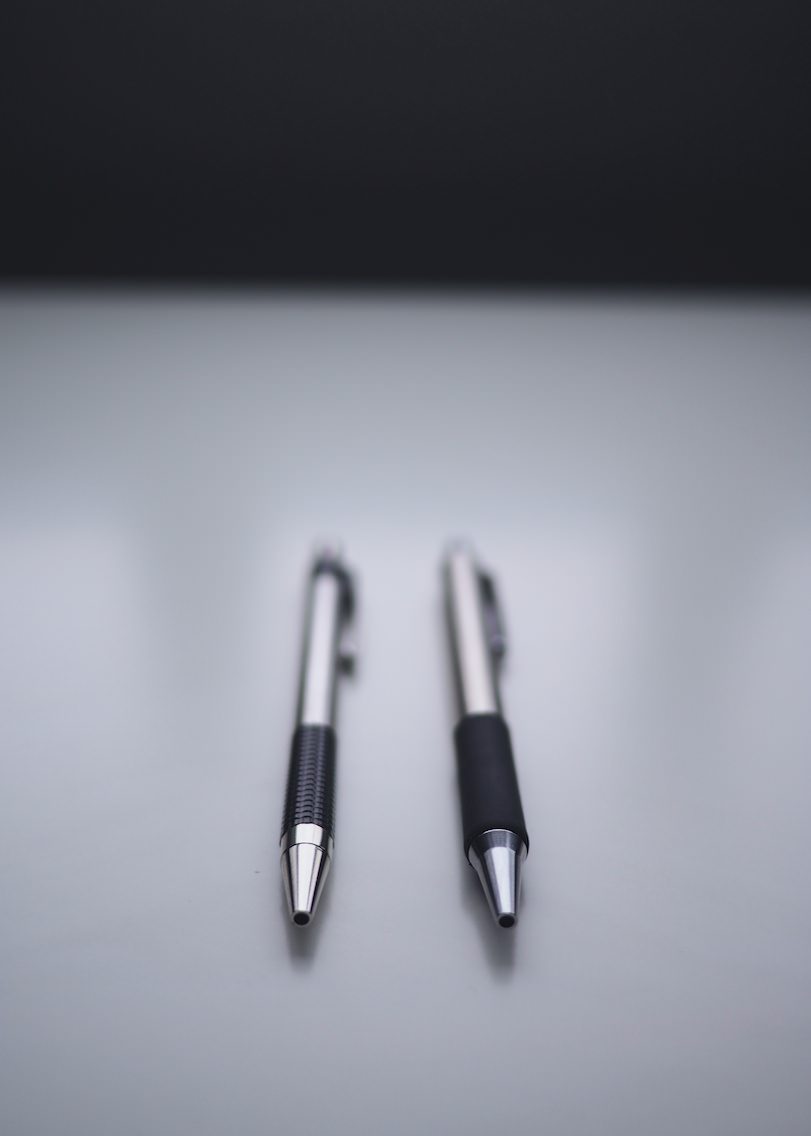 The rubber grip feels good and doesn’t have a cheap finish like the Pilot G2. Between the added weight and the rubberized grip, the F-402 is good for hours of endless writing.

My only gripe with the rubberized grip is its ability to handle moisture. My hand became sweaty one afternoon and the rubber grip became extra slippery — the pen could twist in my hand when I was writing. You could chalk this up to an extremely sweaty hand, or you could conclude that the stainless steel and rubber grip combination doesn’t handle moisture well. Your call. 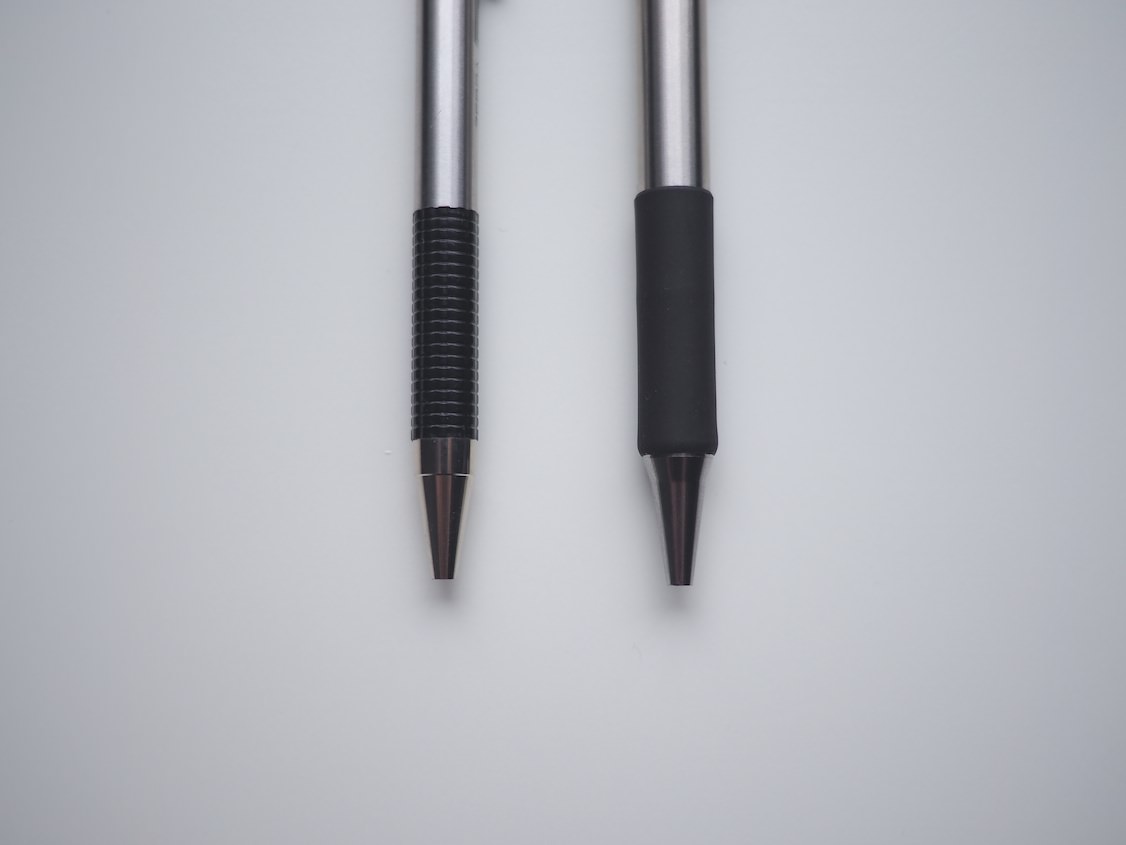 One of my favourite aspects of the F-301 was the way in which the tip tapered to a fine point on the page. The F-402 follows suit and does well in giving a worthwhile visible feedback while writing. It does have a small change in design from the F-301 at the base of the tip, but it’s not noticeable in practice. 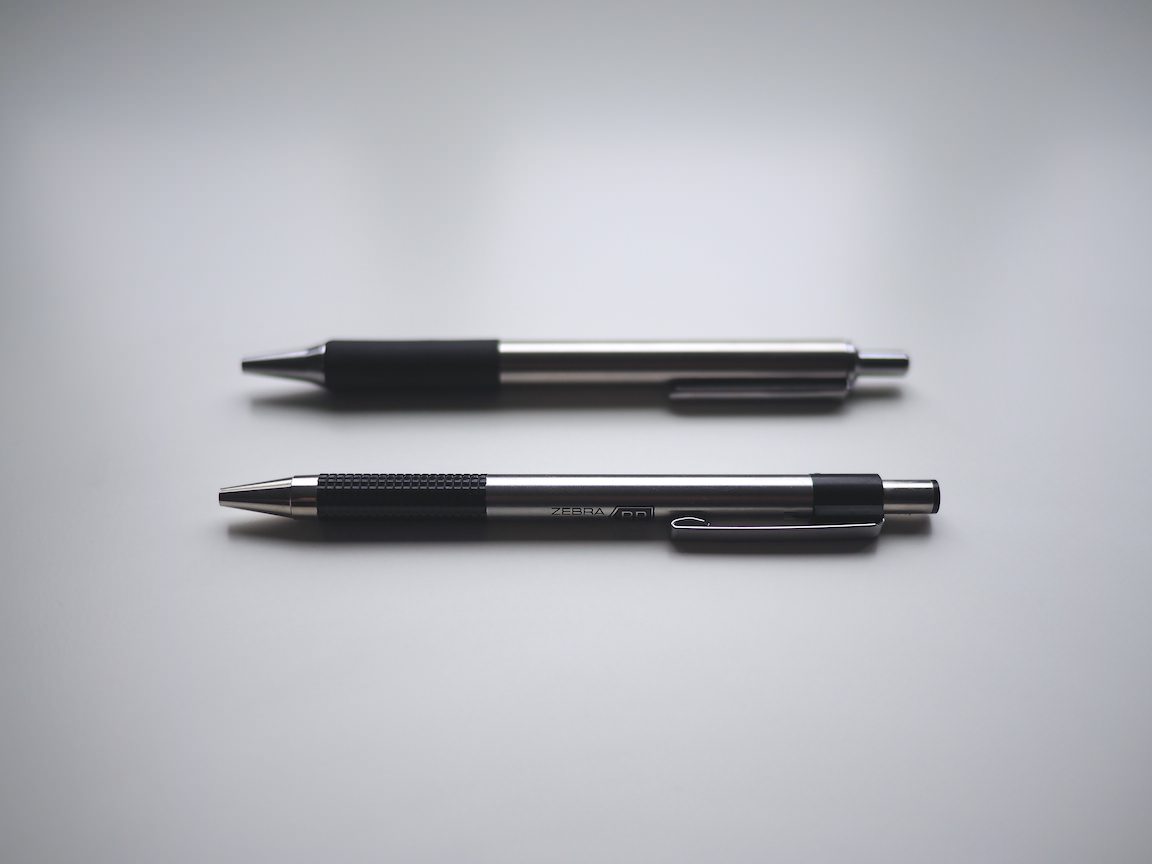 I’ve been searching for the perfect desk pen ever since I started writing about pens. I want a pen that looks classy, that writes thin lines, that feels comfortable to hold and that is durable enough to handle everyday office bruises.

The F-402 fits my bill perfectly. The only problem I’ve run into is that the local Staples only carries the F-402 in two-packs. I would appreciate a 10-pack of these beauties. 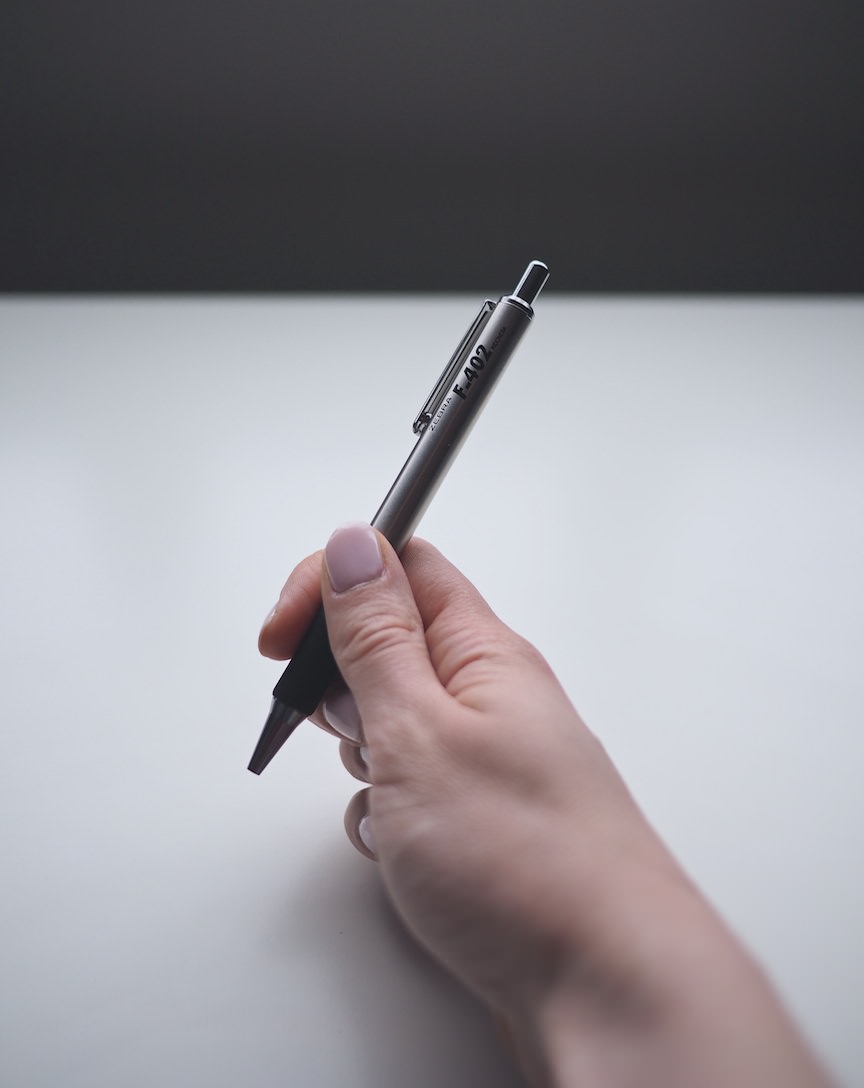