My Very Initial Impressions of the Canon EOS R

It might be too early to say the Canon EOS R and Canon’s mirrorless RF mount have been revived, but I also don’t think it was an overly successful launch. Judging from those who know better than I, and judging based on major holiday sales, my suspicions are the EOS R hasn’t flown off shelves since inception.

Apparently though, dropping the R’s and RP’s price was some sort of magic steroid — it’s been hard to get your hands on an EOS R in an instant. I ordered one in the very first few days of 2020 and received it three weeks later, suggesting a bit of a backorder.

I can understand why the EOS R hasn’t flown off shelves, at least at its original $2,300 USD/$3,000 CAD price tag. Specs simply don’t match what Sony is pumping out, and a general lack of professional necessities — like dual SD card slots, among others — have left the RF mount wanting.

Which isn’t to say this system is a failure. RF mount glass, though expensive, has incredible reviews nearly across the board, with gargantuan lenses like the Canon RF 50mm f/1.2L and Canon RF 28-70mm f/2L pushing lens technology to new heights. And the only relatively affordable lens — the Canon RF 35mm f/1.8 Macro IS STM — is small, light, fast, and even comes with a macro option for the tempting price of $500 USD/$650 CAD (I bought mine for only $300 CAD with a rebate).

With this in mind, I wanted to try my hand at my first Canon camera. It’s the most popular camera brand for a reason, so I knew I was in for a treat.

So far, the honeymoon phase is in full effect. 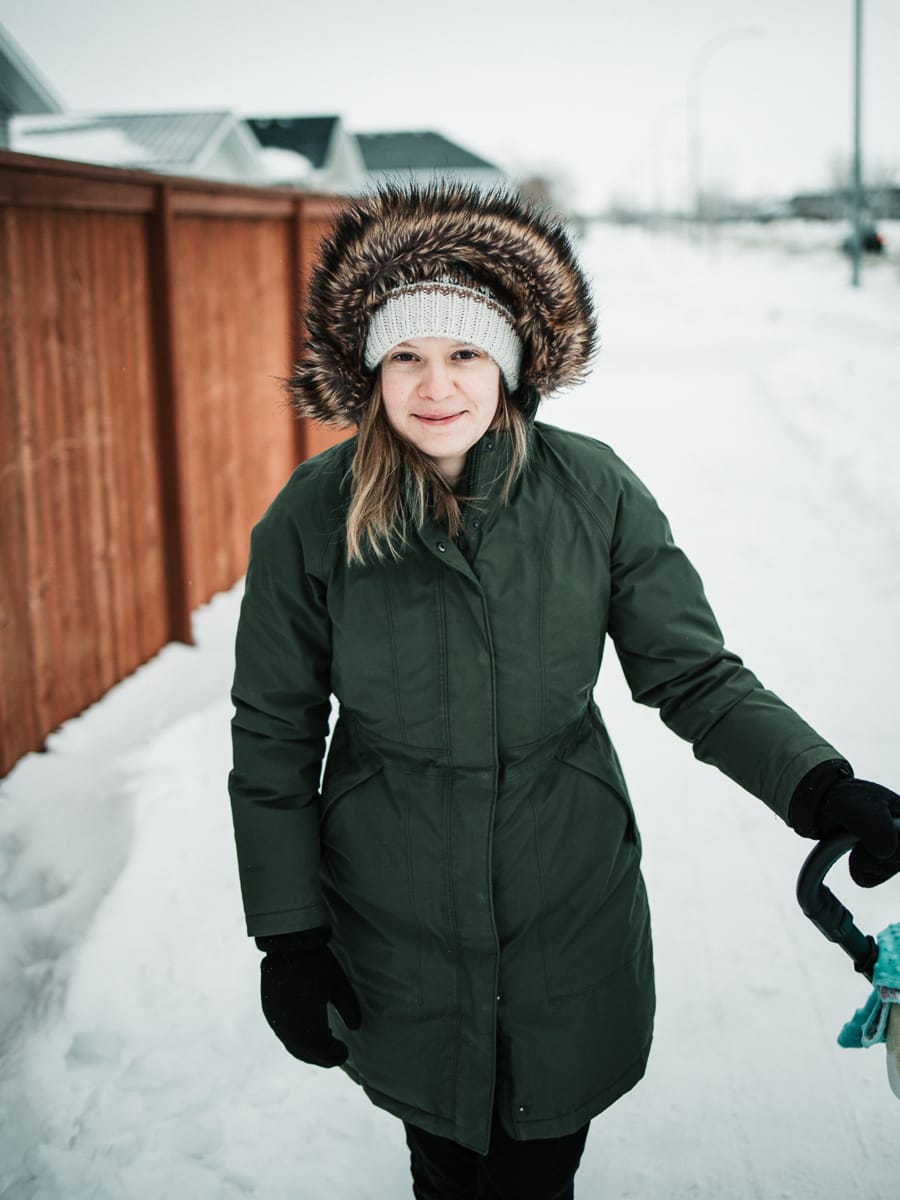 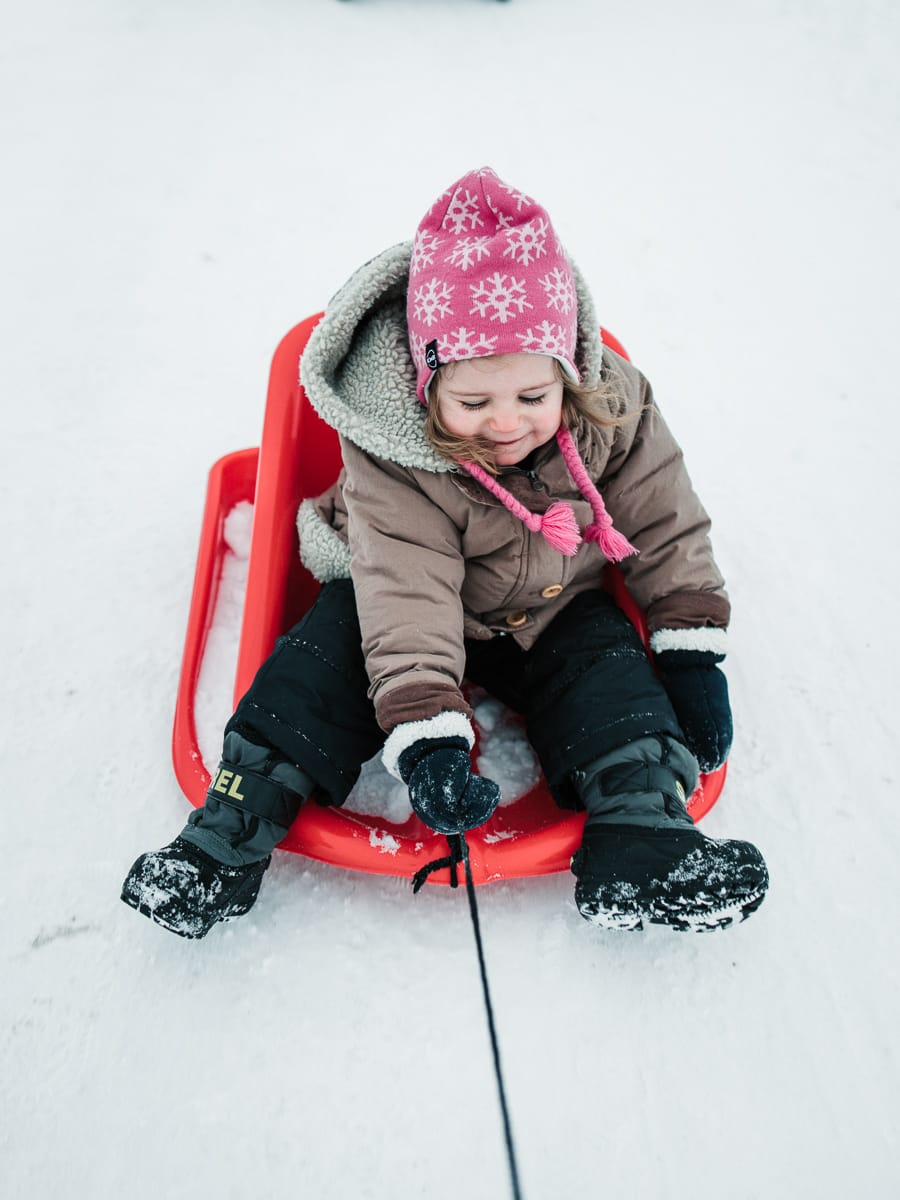 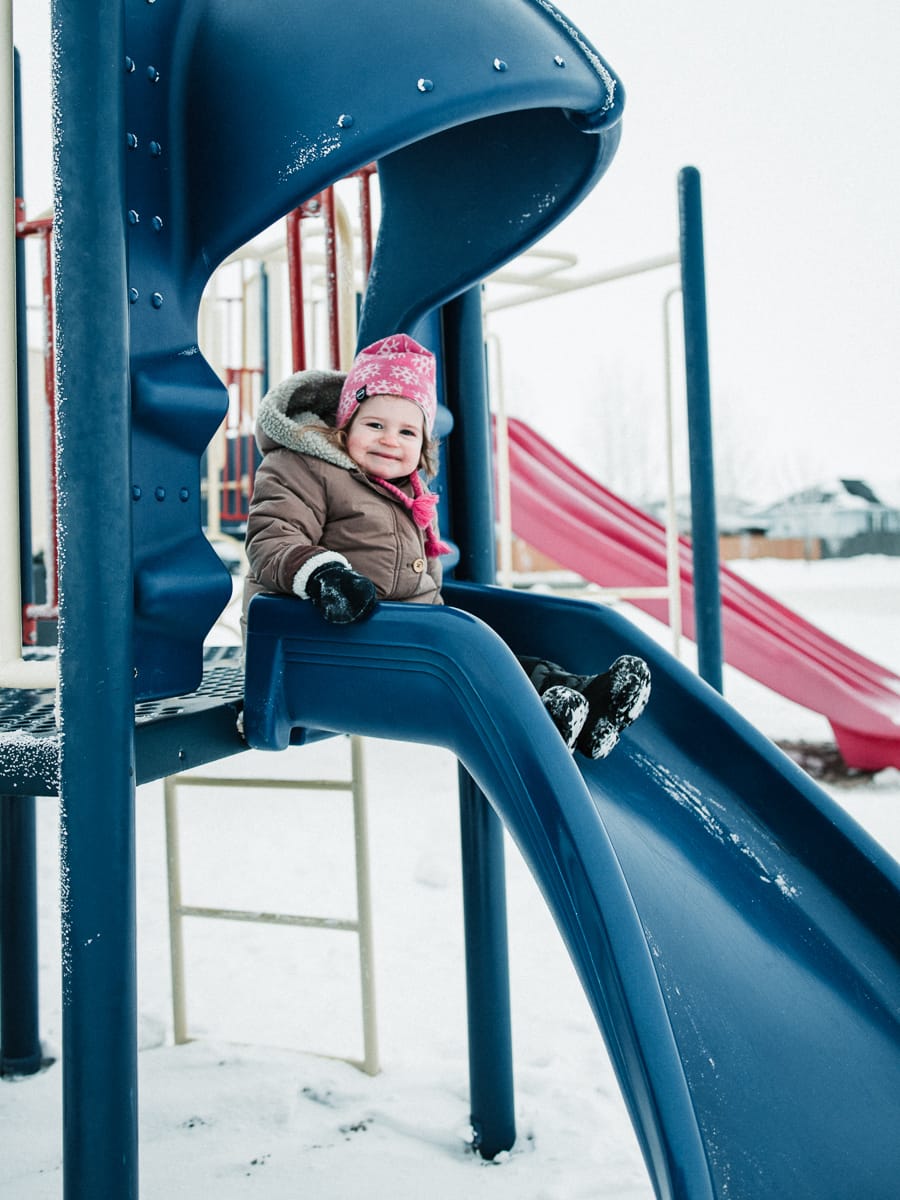 Here are a smattering of thoughts after my first weekend and first shoot with the EOS R and the 35mm f/1.8 Macro.

Ergonomics: I’ve been around the block now — I’ve jumped from Olympus to Sony to Fuji and now to Canon, and the EOS R’s ergonomics are the best of any camera I’ve tried so far. The R’s grip is deep, comfortable, and fits my hand wonderfully. Even with, especially with, big winter gloves, this extra grip is awesome. For the first time in a few years, I can shoot outdoors in the winter without taking off my gloves to feel some tactile feedback.

Touchscreen: I haven’t had a touchscreen on the back of a camera before, and it turns out I chose the best touchscreen available on the market. The EOS R’s touchscreen is sublime. Touch targets are easy to tap with a fingertip, swiping and pinching to zoom work well, and menu systems can be navigated with a finger. Even Touch to Drag AF works very, very well, though not ideal for left-eye shooters or for shooting with gloves on.1

Buttons and Dials: The EOS R’s buttons and dials are the best I’ve ever used, as well. Each button has a noticeable weather-sealed padding feel, yet enough of a press/depress to know you’ve properly pressed the button. I’m most impressed with all the knurled dials — again, even with gloves, it’s very easy to spin the dials and feel the dials click as you cycle through settings. 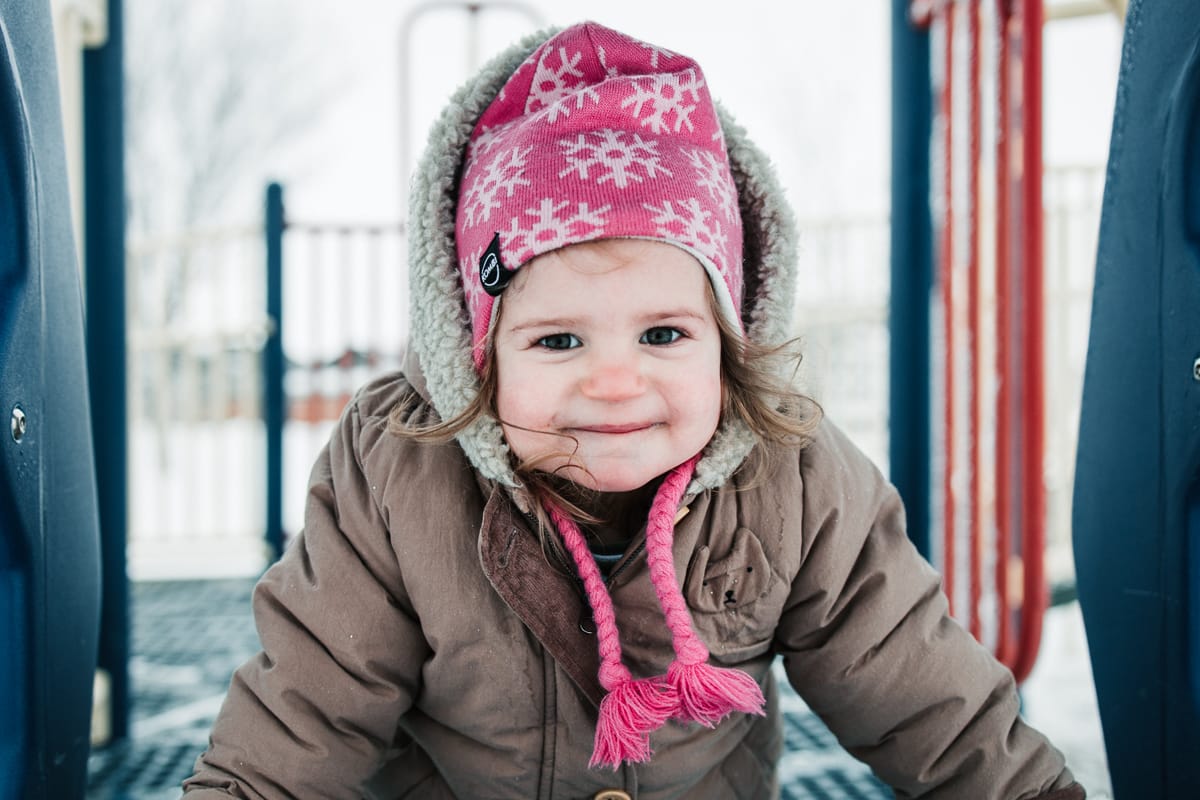 Eye AF: Of the four hottest topics for me, Eye AF is the most significant revolution to my shooting kit. Either it’s operator error, or the Fuji X-T2 and Sony A7II before it weren’t the best cameras for keeping a subject’s eye in focus. The EOS R puts both those cameras to shame in the Eye AF department (and it should, considering it’s more than three years newer than the aforementioned Fuji and Sony cameras). Two or three quick settings and the R locks onto a subject’s eye and does a surprisingly good job in not letting go. The camera seems to struggle with my six-week-old daughter’s eyes (I’m thinking it’s the lack of pronounced pupils), but has no problem with any other eyes I’ve thrown at it so far. I expect functioning Eye AF to have the biggest impact on my shooting in the coming months and years.

Some things I don’t care for: Indeed, the EOS R’s Touch Bar feels half-baked. Right now, I only have it set to function during playback/review mode. I think there’s something here, but it’s not there just yet.

The on/off switch is on the left side of the camera. I simply don’t understand how this design feature makes it through review. Flat out, this is the worst camera design decision ever made. No matter what, the EOS R requires two hands to begin operating.

I’d really like to see a focus point joystick, as this here left-eye shooter struggles to have room for his right thumb. My current solution is to slide my left hand back from the lens and use my left thumb instead.

A single SD card slot isn’t a dealbreaker, but I can see why this gives professionals pause. It gives me pause, heading into my first wedding this coming summer.

I don’t know if there could be a more jack-of-all-trades lens available today. The RF 35mm f/1.8 pulls double — even triple — duty in my photography kit: 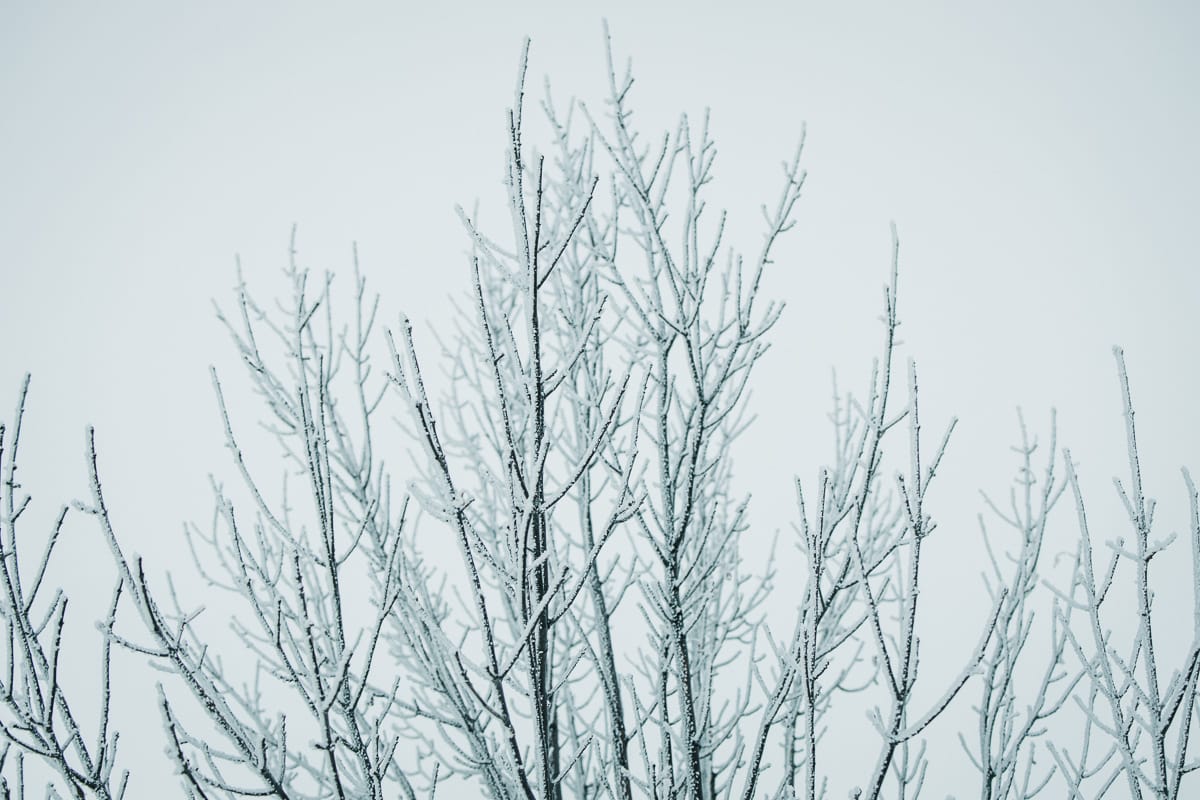 I’m not disappointed in image quality at all with this lens, though I think I expected just a tad more sharpness wide open. My expectations were unreasonably high though, as nearly all the other RF mount lenses are showing stunning results at all apertures. Even still, reasonable sharpness plus strong Eye AF means nailing focus on my ever-growing little girls. 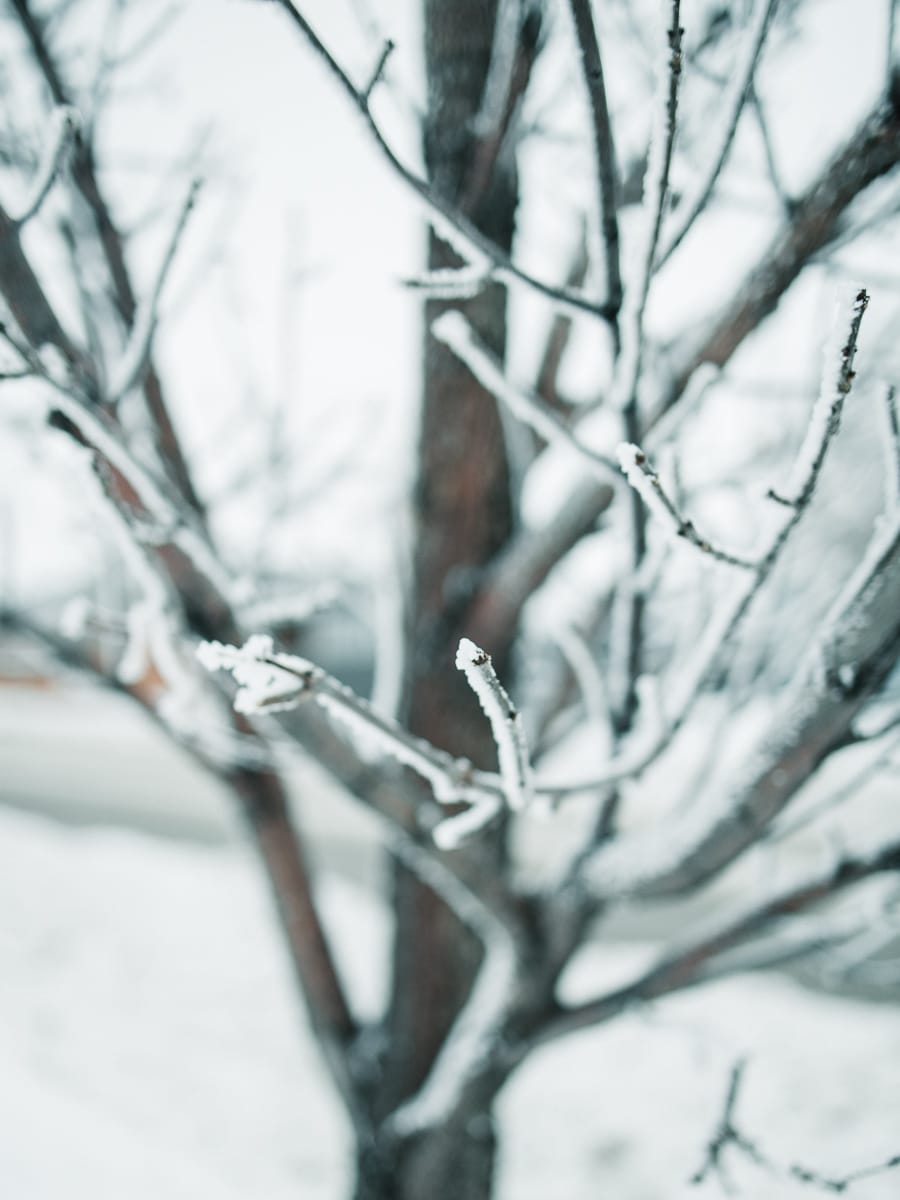 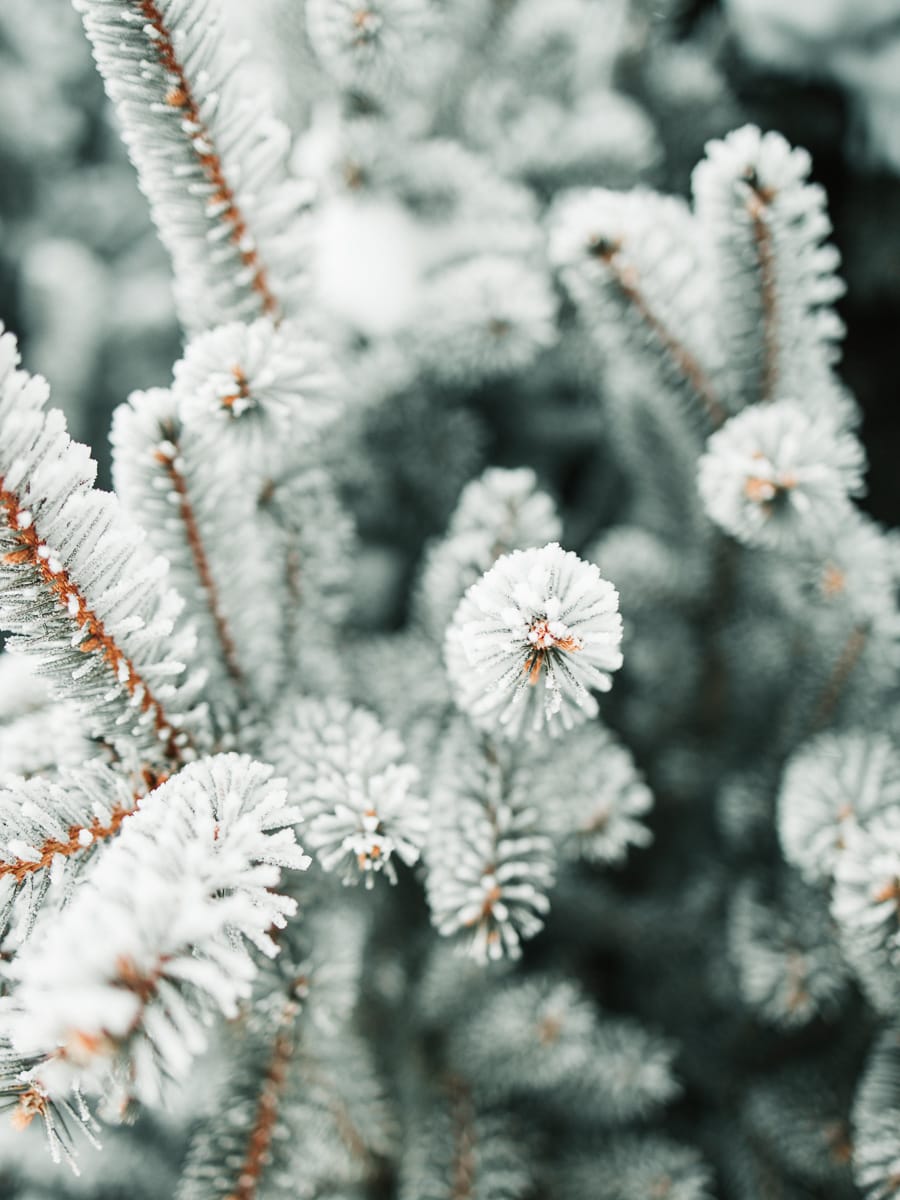 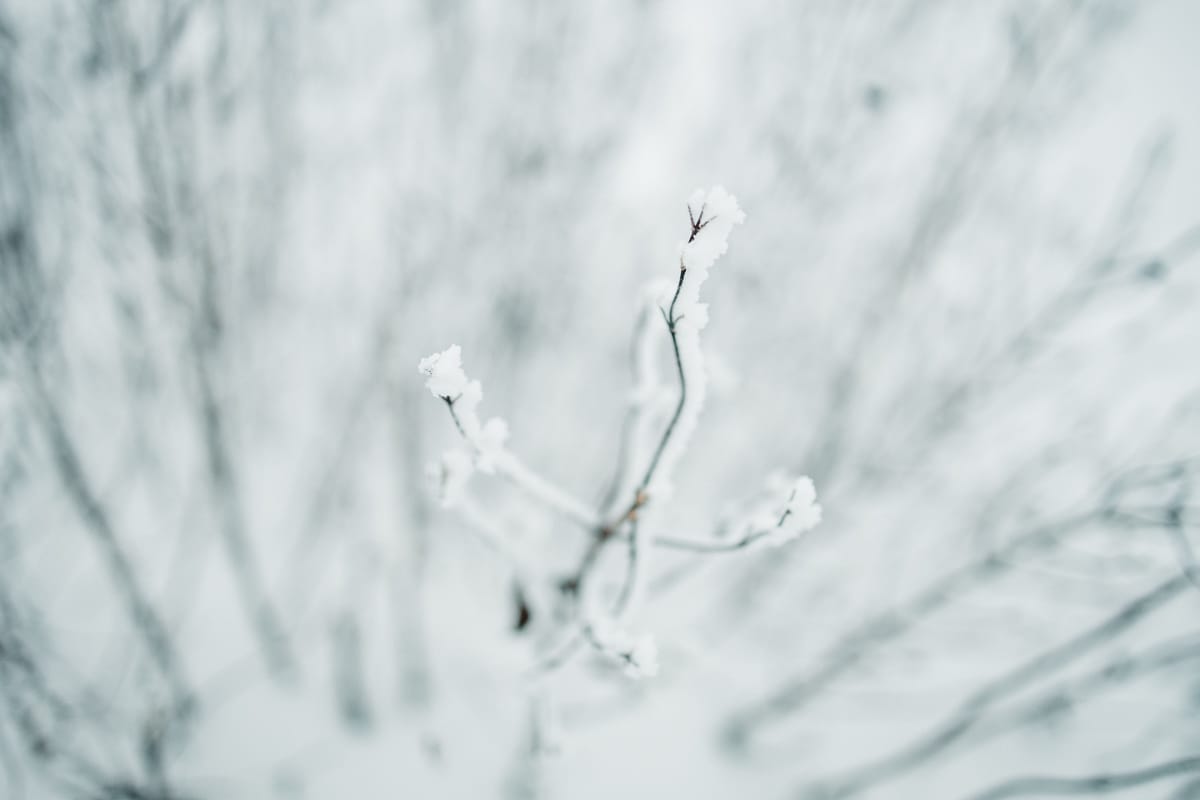 The macro option is a ton of fun, especially when testing out a new lens. We’ve had some nice warm weather recently, resulting in some beautiful Manitoba hoarfrost on the trees and bushes. No better way to test a new macro lens than with hoarfrost. 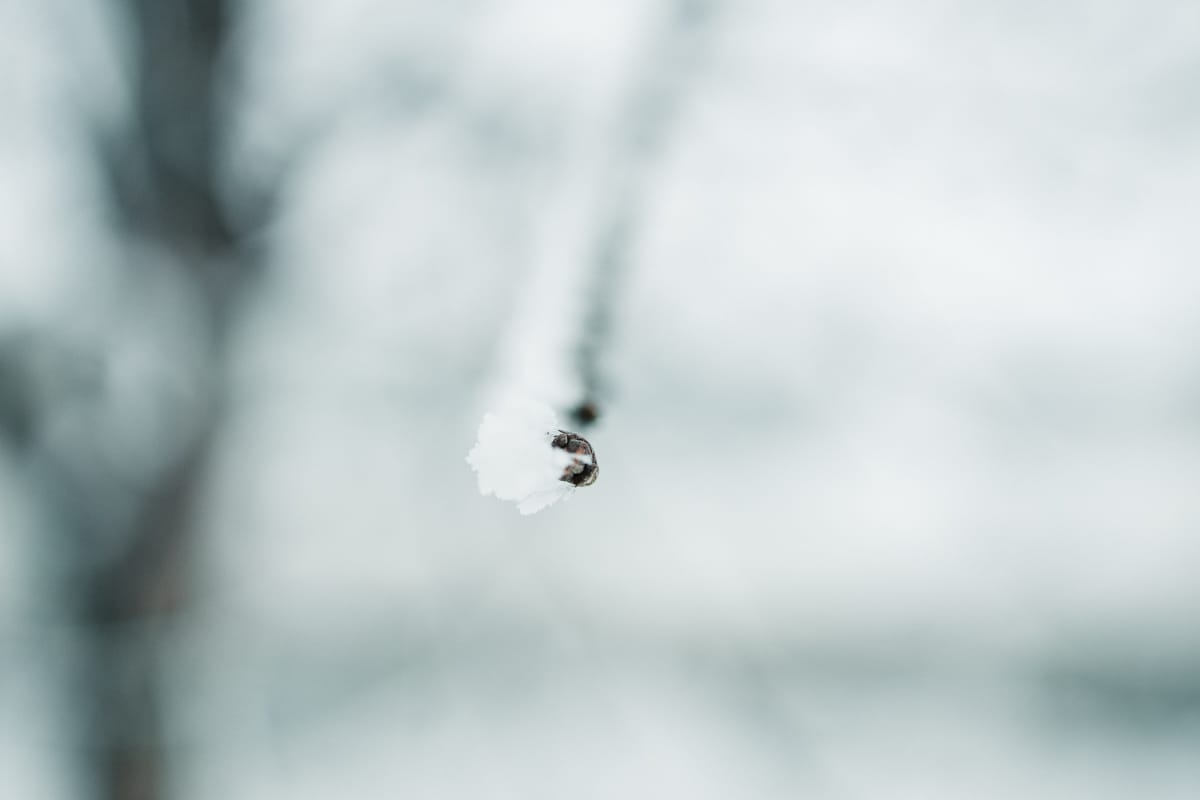 This one in particular — you probably wouldn’t have a hot clue what the photo is of if you hadn’t read above. Macro plus f/1.8 means a whole new world of ensuring a larger depth of field to maintain focus and context.

Again, these are very early days, and I’m in a full-on honeymoon. I’m pricing out the Canon RF 50mm f/1.2 as we speak (write?), and the sensationally small RF 70-200mm f/2.8 seems like an obvious addition to nearly every EOS R shooter right now. 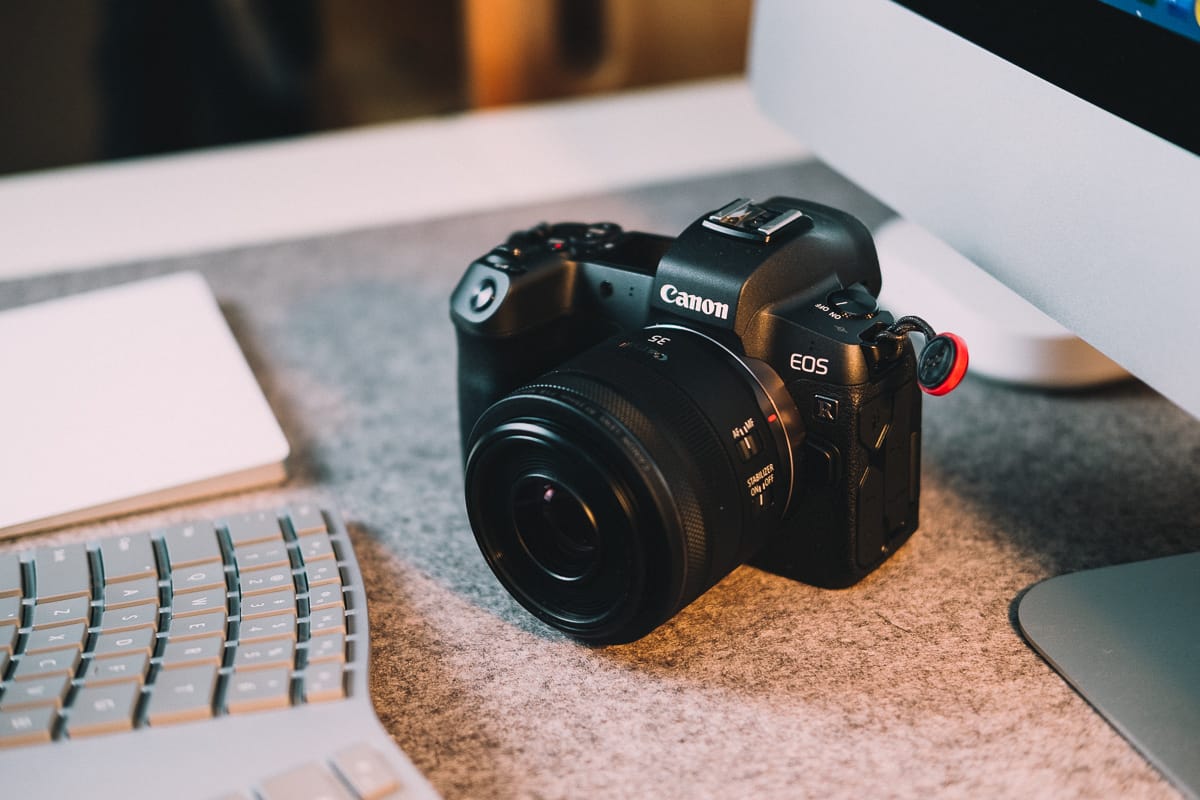 Though if I count it all up, I might need a disbursement from the mortgage to make it happen — RF glass is very expensive right now, with the majority of the lenses available lining up in Canon’s premier L lens lineup. 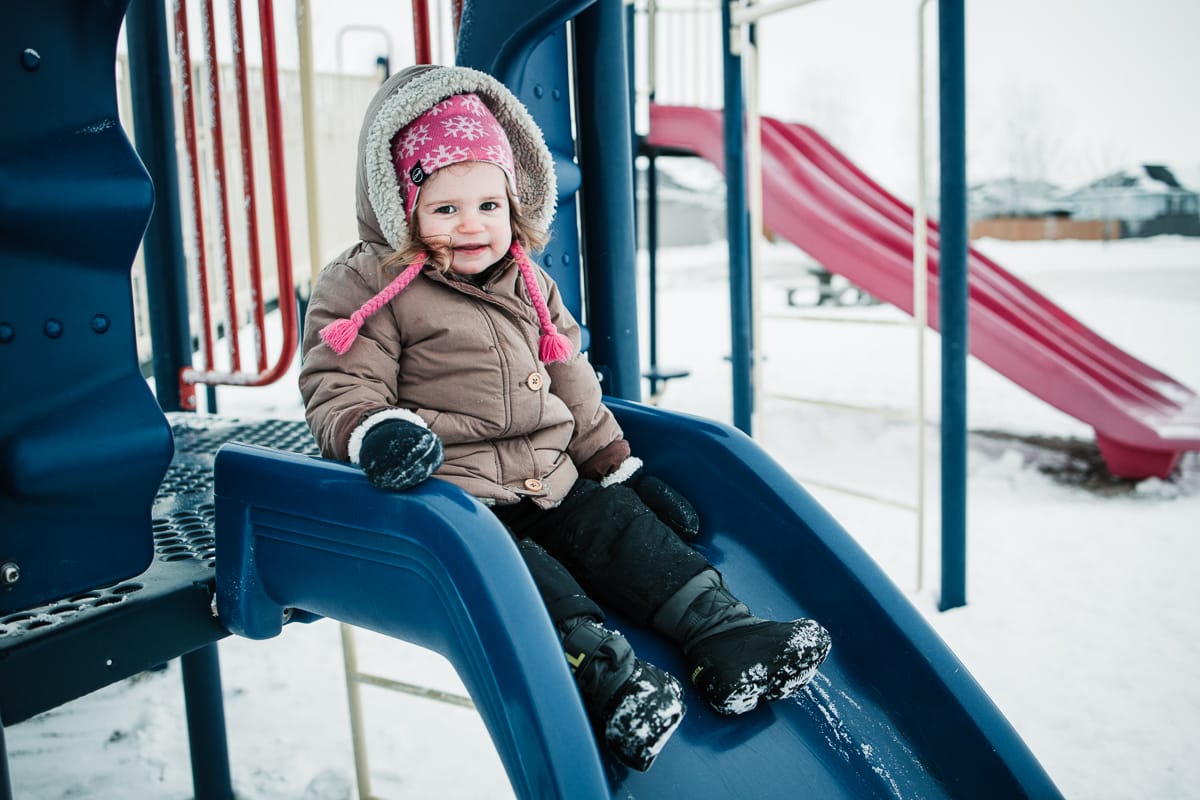 Perhaps this is the start of a fun new relationship with the EOS R. I haven’t turned my back on my trusty Fujifilm X-T2 or X-Pro 2 just yet, but their days may be numbered.