The biggest complaint I had early on with the Sony a7II was the camera’s ergonomics. Even though the body is bigger and heavier than any Olympus OM-D body I’d ever tried prior, the a7II body doesn’t feel remotely as good as an OM-D.

This has been the overarching hiccup of the a7 design since day one. The a7II introduced an improved shutter button placement and an improved front grip. I remember picking up the a7 in a Best Buy and being astounded at how poor it felt in my hand. My first experience with the a7II was dramatically better, but I always felt letdown when comparing it to the OM-D E-M5 II.

Considering the amount of money I’ve put into Sony equipment in the last six weeks, the last thing I was going to do was put up with poor ergonomics. 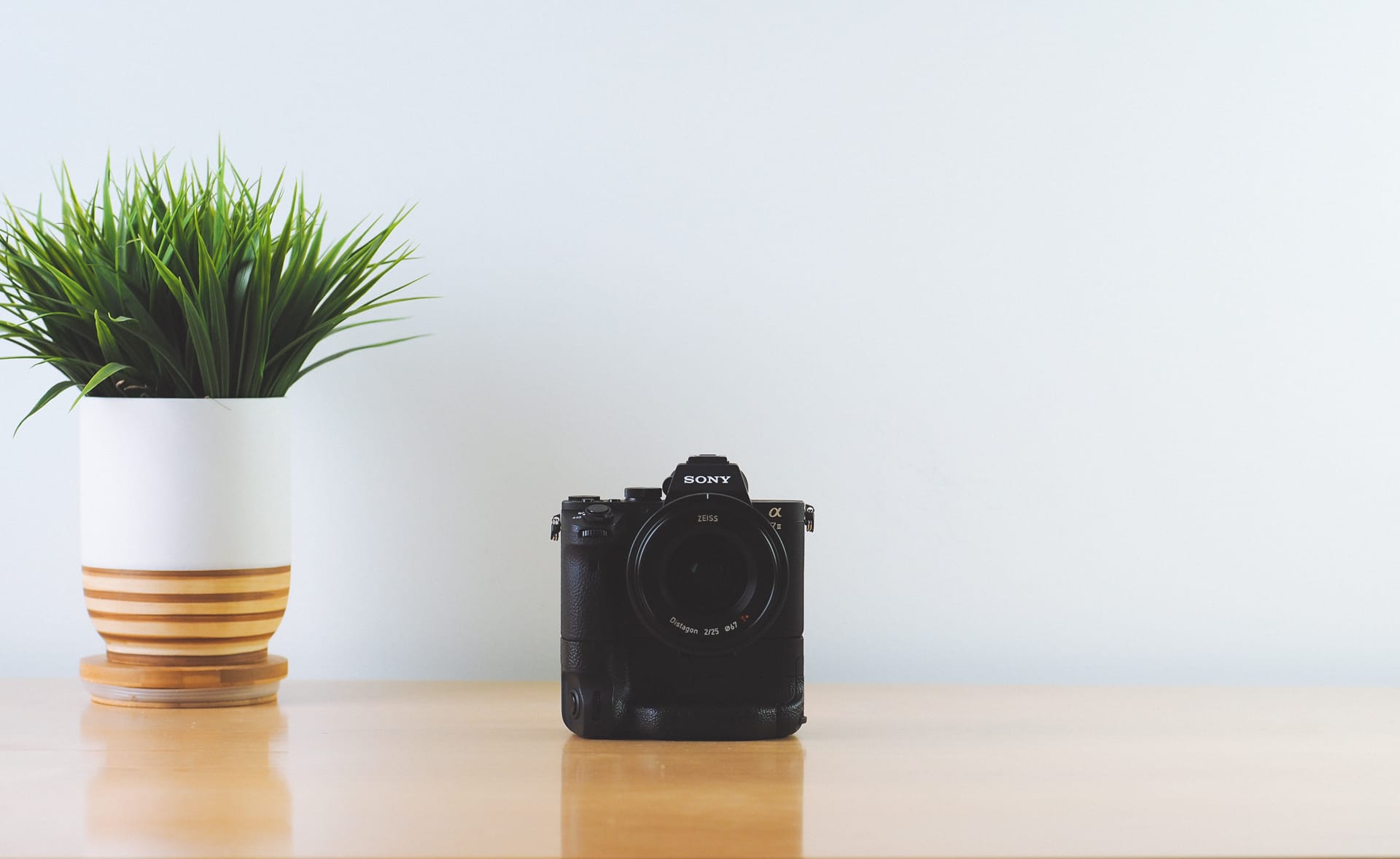 The a7II’s vertical battery grip solves nearly all of the problems I have with the camera’s ergonomics. The grip makes the a7II camera body substantially bigger, but the improved ergonomics, doubled battery life, vastly improved portrait shooting, and improved body balance make the VG-C2EM vertical grip an easy follow-up purchase.

The grip also provides a boost in confidence — just pulling out a camera body with a vertical grip attached makes the entire kit more “professional-looking”. This is likely placebo, but I undoubtedly feel a boost of confidence with the larger package in hand. 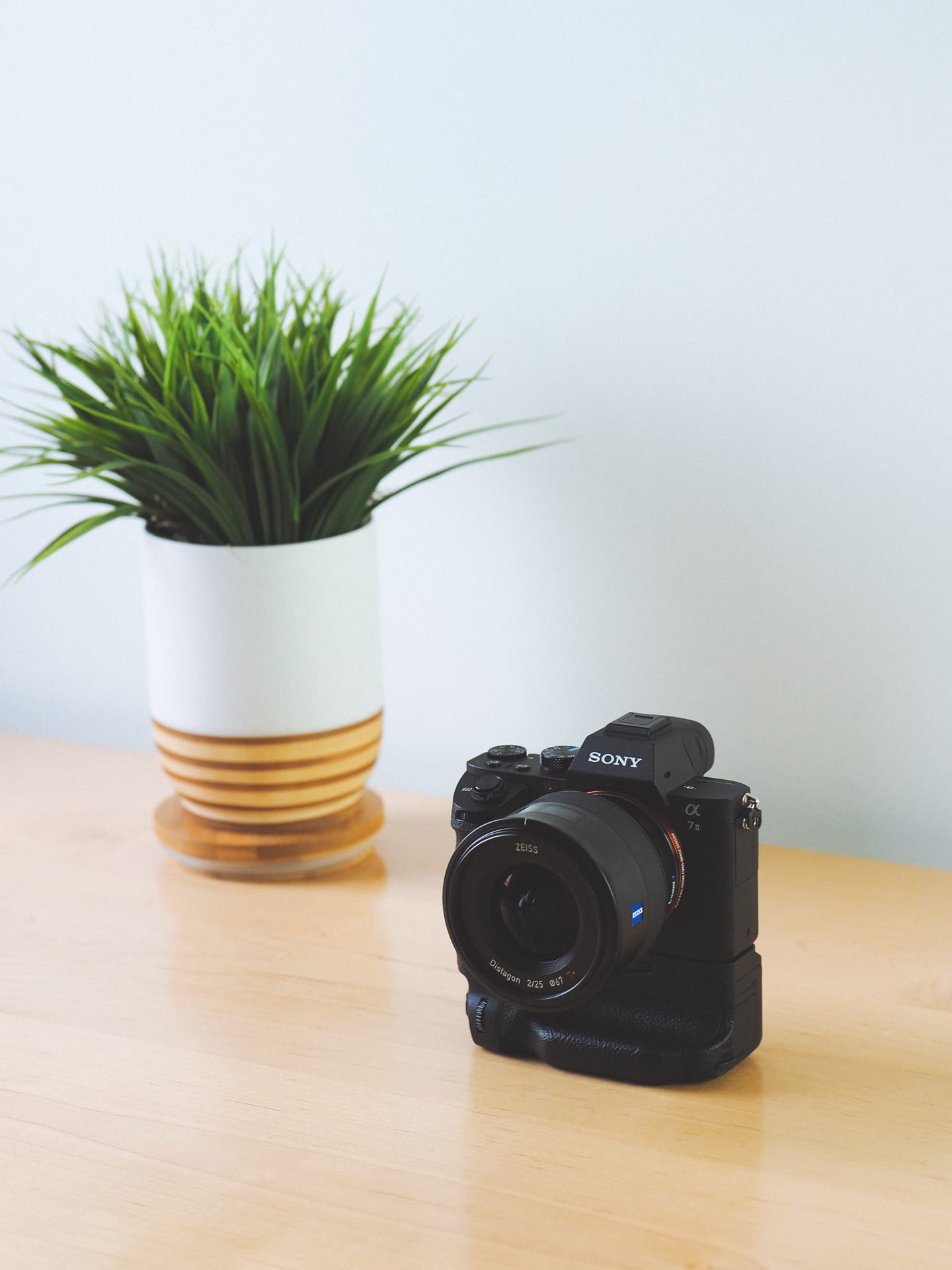 The vertical grip extends the bottom of the a7II beyond your pinky finger. Early on, I found the a7II’s grip to be fairly comfortable to use, but not deep enough to make true one-handed use a viable option. With my pinky finger floating freely below the camera body, I quickly felt my three-finger grip to be compromised. Strap an expensive lens onto the body and my worry doubled.

The vertical grip eliminates the free-swinging pinky finger and provides more of a downward balancing to make one-handed shooting more viable and more comfortable. In landscape shooting, the vertical grip doesn’t provide extra depth, but it adds more length to the body to make for a proper four-fingered grip.

Where the grip truly shines ergonomically is in portrait shooting. The grip that runs horizontally below the bottom of the lens mount is deeper and thinner, providing a larger surface to hold. Further, the inset where the side of your middle finger rests is a deeper groove, providing more improved support. And finally, with two batteries stowed in the grip, the grip provides a perfect balance between not being two heavy and not feeling hollow or fragile. As a whole, this vertical grip shines ergonomically in portraiture.

This doesn’t mean it’s for everyone. Quite clearly, the vertical grip adds size and weight to the overall camera body. I had to remove a divider in my camera bag to make room for the beefier a7II package, eliminating necessary protection for a third lens. I also don’t like how it feels when slung across my body with the Luma Labs Loop 3 — each step I take is a reminder for my hipbone that the a7II has increased in size and stature.

I believe the trade off between size, weight, ergonomics, and utility still sways in favour of the vertical grip, mind you. I’d say the vertical grip makes the a7II feel on par — both in ergonomics and in size — with a Canon 5D camera. The 5D still feels a bit chunkier in my hand, but I can’t think of a different camera body that feels closer to the a7II and vertical battery grip. 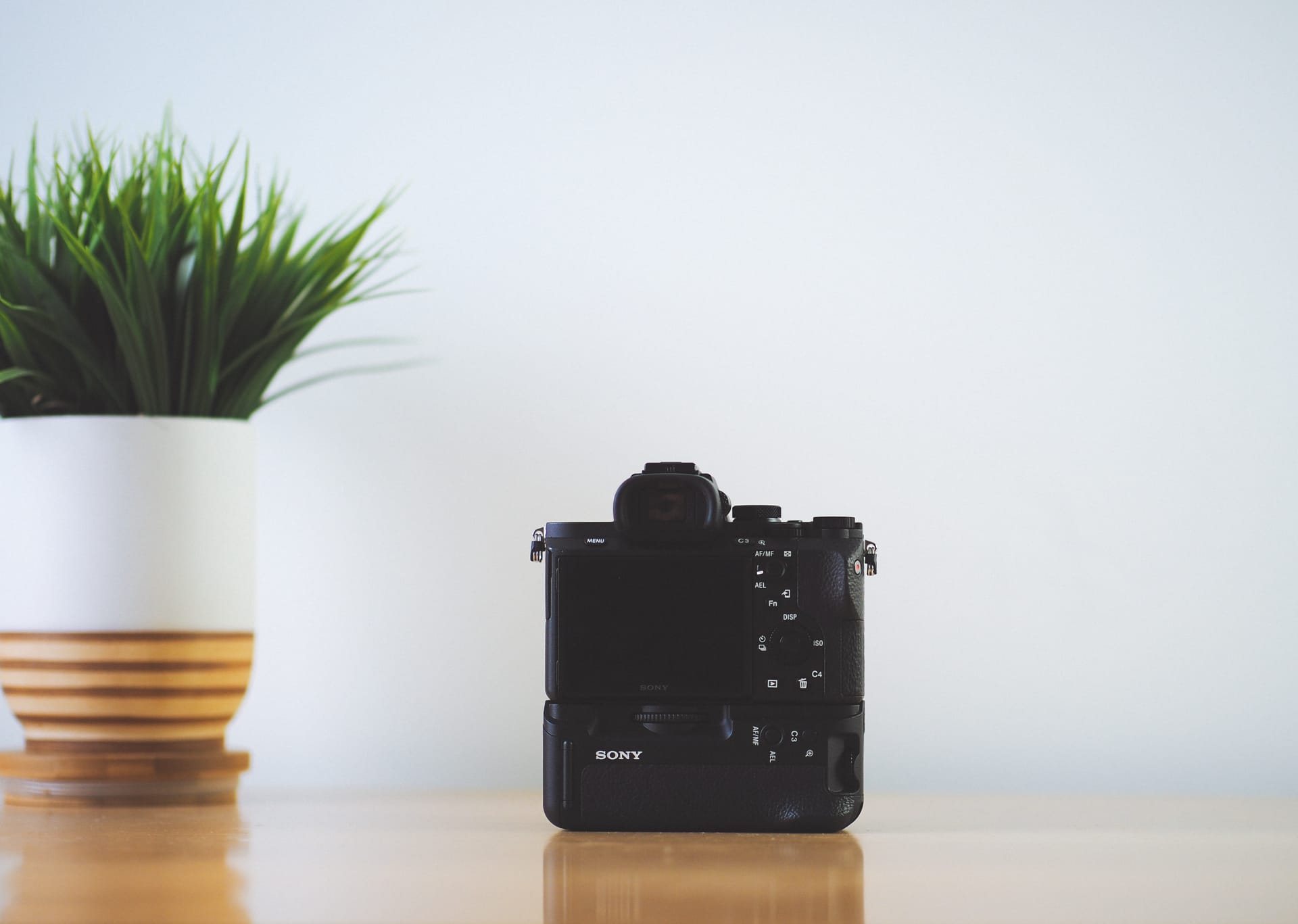 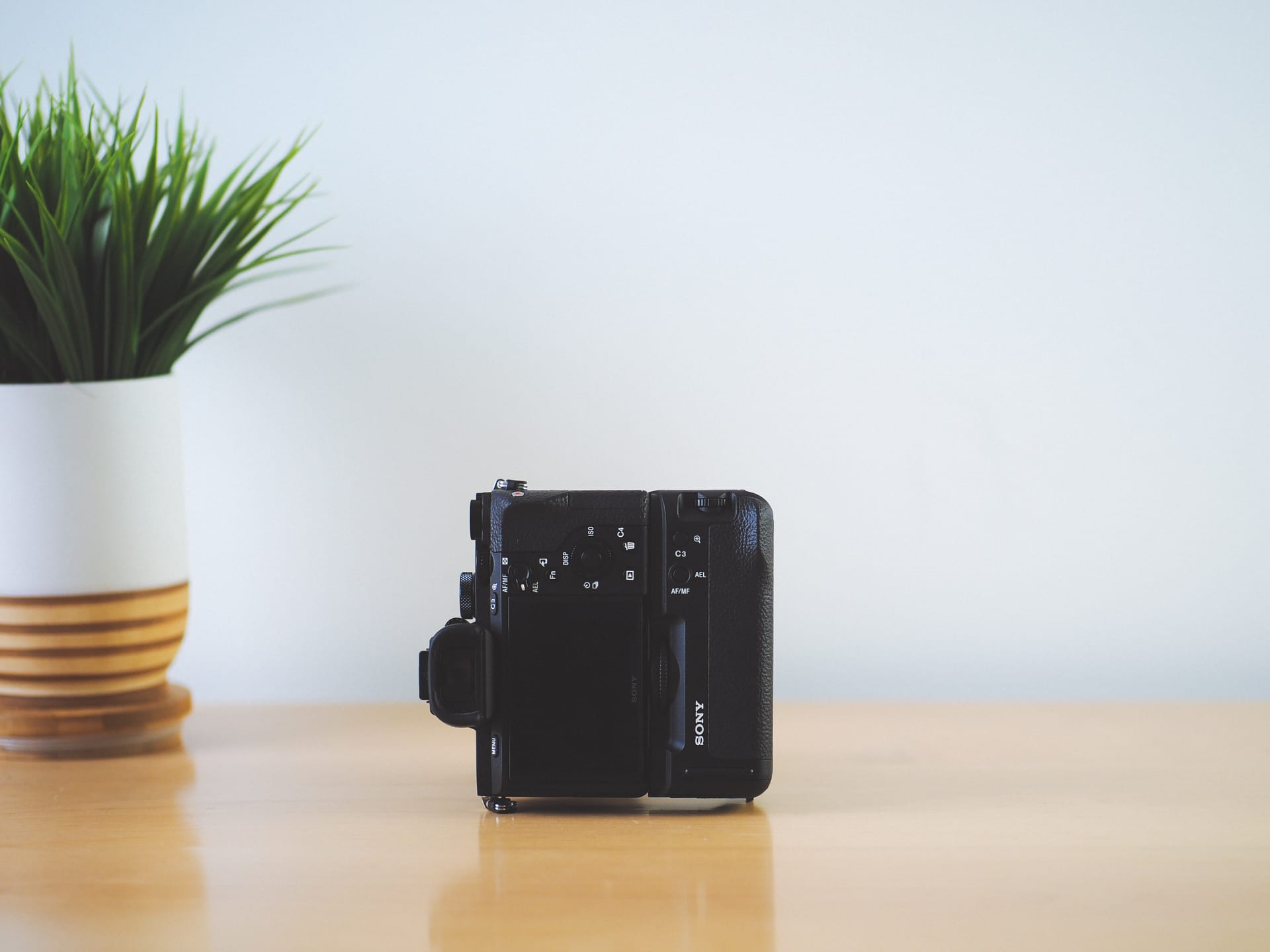 The other significant flaw with the vertical grip is the lack of control dial. Generally, I’m not sure this would be a major issue. However, Sony’s incessant need to limit focus point selection to a button press and then a focus point means I have to either change the functionality of one of my function buttons or I have to leave focus point selection to the middle button in the control wheel. When in landscape, the process is something like this:

Without a control wheel and the necessary middle function button on the vertical grip, the process of choosing a focus point goes something like this:

This by no means is an ideal process. I could change one of my function buttons already on the vertical grip, but I’d still need to use the control wheel to select a focus point. And that’s where the sole ergonomic problem lies with the vertical grip.

Don’t get me wrong — by and large, the vertical grip’s controls are great. The buttons have a pleasant click and the dials have a smooth spin, both of which feel better than the a7II’s dedicated controls. I also like the lack of switch next to the AF/MF/AEL on the vertical grip — I find there to be less hunting for the button and less accidental switches. I would like an Fn button on the vertical grip to bring up that handy tray of most-used settings, but I’ll get over it.

This is an odd admittance: I don’t have a second battery to test the increased battery life with the vertical grip. I bought the grip first as an ergonomic and portraiture improvement and second as a battery booster. The doubled battery life is just an awesome by-product of the grip.

I have read, however, that a second battery provides nearly doubled battery life2 and that the a7II is smart enough to drain one battery and then the other, rather than using them in tandem. This second feature is especially handy when you have two batteries onboard but don’t use the camera as much as anticipated, allowing you to only need to charge one battery instead of both.

I like the way the batteries are stowed inside the vertical grip. Turn the switch on the left side of the grip, press down on the little blue switch inside the door, and out pops up the battery tray. It’s quite the mechanism.

That said, for some stupid reason, you can’t charge the battery/batteries through the camera. Sony notoriously ships the a7II without a dedicated battery charger, instead opting to charge an extra $30 for a battery charger. Without the dedicated charger, you charge the battery by connecting the entire camera into the mini-USB power adapter. If you don’t have the dedicated charger and want to charge your battery/batteries in the vertical grip, you have to remove the battery from the grip, unscrew the grip from the camera, put the battery into the now grip-less camera, and plug the whole camera into the wall.3 The batteries inside the grip do not charge through the camera. This is a mind-boggling decision, and nothing short of one of the stupidest design choices I’ve ever come across in a $2000 device.

I always like reading bulleted lists, so let’s try one of those now. 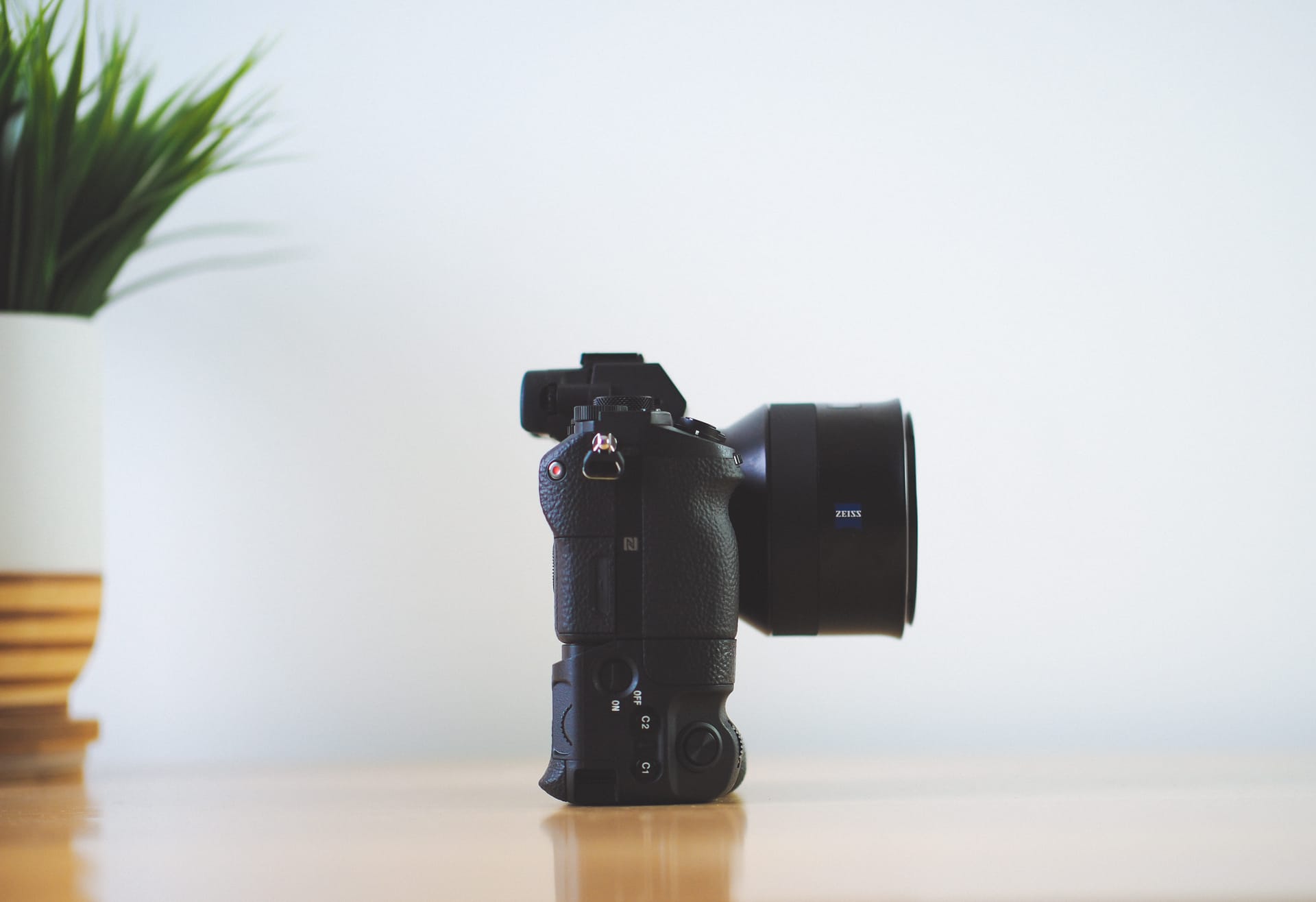 Especially considering the price. Honestly, I lucked out. Canadian camera pricing has been extraordinarily cheap over the last six to eight months — our dollar has dropped considerably, but prices won’t adjust until April 1. The result: I picked up the VG-C2EM vertical battery grip for less than $250 CDN. That’s the equivalent of about $175 USD. For $175 USD, this vertical grip is a no-brainer. You may not use it all the time, but it’s great to have in case you go on an extra long hike or plan to shoot portraits.

Amazon’s current price doesn’t reflect this reality, though. At $348 USD, you have to know you want the VG-C2EM vertical grip before diving in. This is an expensive addition to your a7II. It’s a worthy addition, but it’s an expensive one.

Even so, ever since I first screwed the grip into place, it has yet to leave my a7II except to charge the battery. It makes the a7II bigger, bulkier, and heavier, but the improved ergonomics, added battery life, fantastic portrait controls, and evenly balanced weighting are big checkmarks on my list. 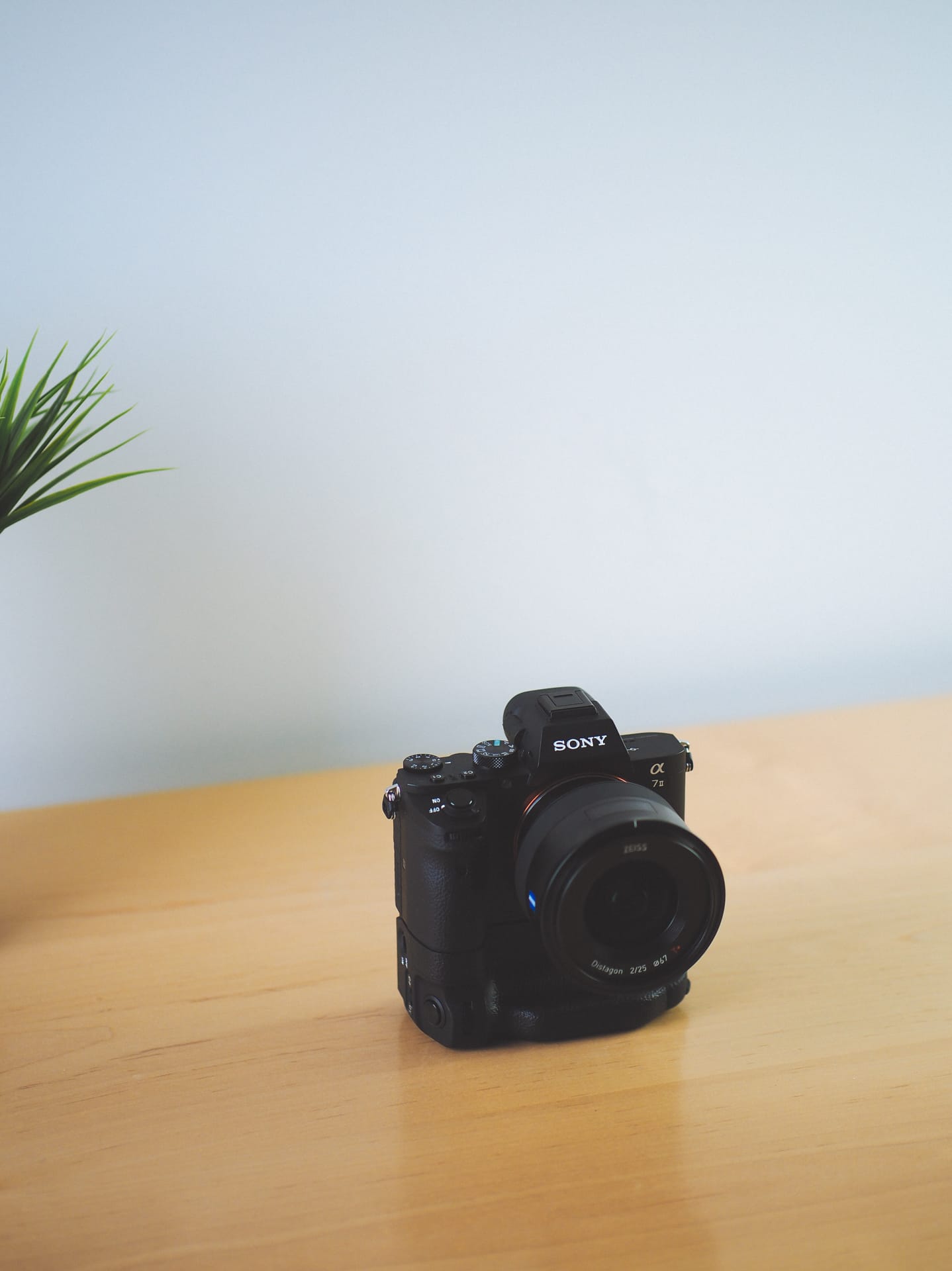 There’s also the whole notion of confidence. It’s a bit vain, perhaps, to state the larger a7II camera body with grip makes me feel more “legit”. But I’d be lying if I said it didn’t. Pulling this camera out in front of my subject has consistently resulted in a “Wow” followed by “Nice camera. How much did that thing cost you?”. It’s definitely vain, but it feels good.

Like they say: Look good, feel good, play good. In this case, shoot good. I think the moniker stands.